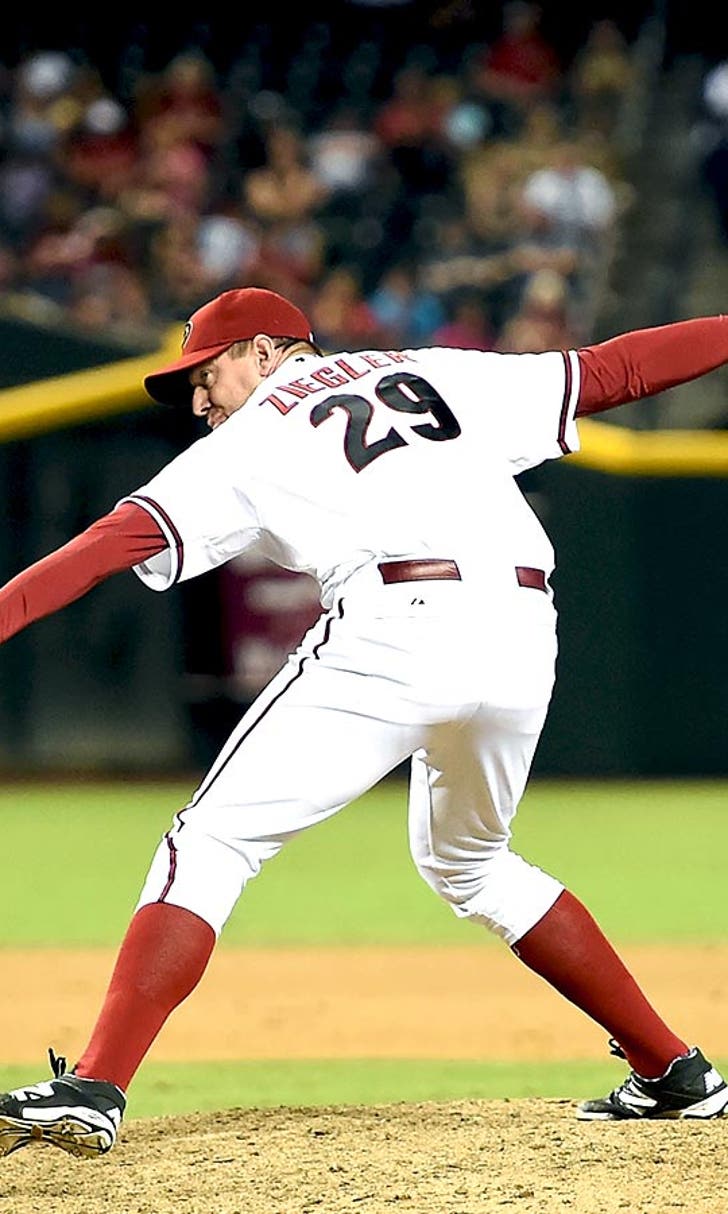 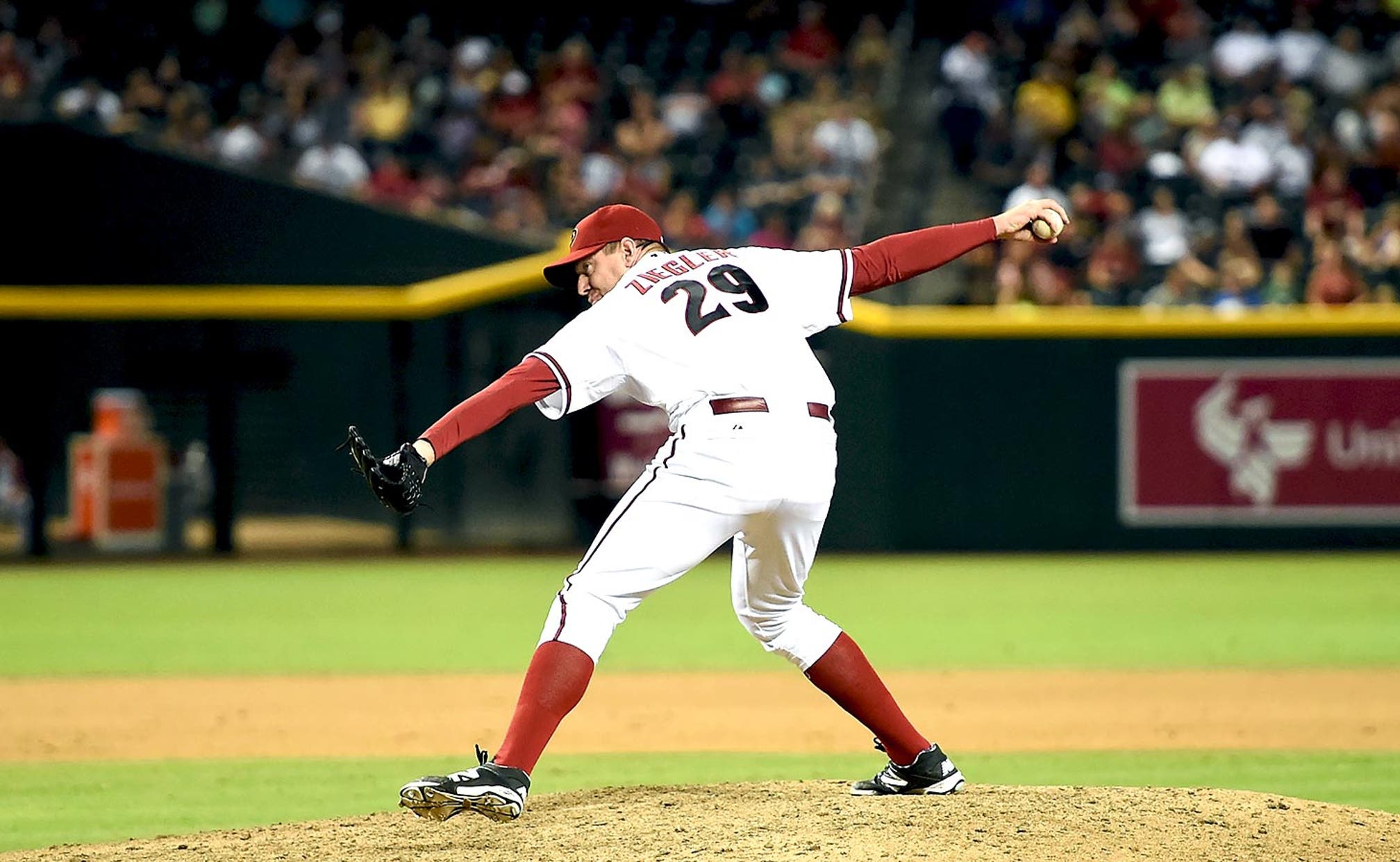 The rarest pitch in baseball

You might think the rarest pitch in the game is the knuckleball -- only two pitchers regularly throw it right now. But there is a pitch that only Brad Ziegler throws often.

Ziegler throws a changeup -- out of a submarine arm slot. Nobody else throws the same pitch with the same mechanics.

Only six sidearmers threw at least 25 changeups last season, and if you up that number to 100 thrown, only Ziegler and (lefty) Aaron Loup make the list. If you limit the list to just submariners, Ziegler's the only one who throws a changeup regularly.

Turns out, the physics of throwing a ball from that angle could be the reason so few sidearmers boast a solid changepiece.

Take Ziegler's slider as an example. Back when he threw overhand, before 2007, he was putting traditional slider spin on the ball from his old arm slot. Thanks to Matt Lentzner at The Hardball Times, we know what that slider spin looks like. From his piece, here are the spins on the ball on pitches leaving from your traditional three-quarter arm slots:

And now here's the spin that those same grips and mechanics would produce out of Ziegler's submarine slot. Very different.

As you can see, the submarine slider has spin that looks more like a three-quarters slot cutter. In late 2013, the pitcher confirmed that this is exactly what his slider looks like. "A true big league slider will have tilt to it. My slider is more flat," Ziegler said. "It's more like a cutter, but it's not as hard."

Here's the thing, though: His sinker has -6.3 inches of vertical movement. That's a full foot of difference from your average overhand sinker. You know what conventional pitch has that much drop? The curveball. Now check the spin charts again.

That submarine sinker with a six inch drop is a rare pitch -- it has more drop than any other sinker in baseball. It drops like a breaking pitch, and probably because he's putting spin on the ball that looks like a three-quarter slot curve.

Take a look at Ziegler's sinker in action, and given that he throws it 86 mph, it's pretty devastating. Basically a hard slider in terms of velocity and a curve in terms of drop, the sinker comes at you as often as a fastball should.

But there are 31 other pitchers who have a release point lower than five feet, and so there are other sidearm sinkers. Their sinkers feature more drop than your average over-the-top sinker: Darren O'Day. Joe Smith. Justin Masterson. Randy Choate. All are funky, all have sink.

But only six of the 32 with the low release slots throw a changeup. That's about a one in five rate. Among the rest of the major-league pitching population, the rate is over one in two (351/681). And it probably has something to do with that illustration above.

Given that Ziegler said that his grip is a circle change grip, and that nothing else is much different about his changeup -- "The release is still the same -- the mechanics are primarily the same" he said -- we can conjecture what sort of spin he's putting on the ball.

You pronate ('pull down' on the inside the ball for a righty) with the changeup and supinate (pull down on the outside of the ball) with breaking pitches, generally. If you compare the slurve's average movement to that of the straight change, you get nearly opposite movement. So let's flip the slurve's movement picture for the submariner to create a changeup spin for Ziegler. And let's compare it to the most similar looking three-quarter slot pitch.

Mechanics, especially for a submariner, are a tricky thing. But it kind of looks like the spin of a submarine change might look a little like the opposite of the spin on a three-quarters slot cutter. If they produced similar movement, you'd get a flat change with a little fade and no sink.

This isn't something that only Ziegler has dealt with. Only one sidearm change -- Ben Rowen's -- actually managed to fade more than its corresponding sinker. And yet almost all of them other than Ziegler's dropped more than their sinkers. So it seems that getting more fade than your sinker is the tough part about the sidearm change.

Ziegler admitted that harnessing the changeup had been tough, but said the pitch was more about the change in speed than movement. What does his change look like? "Hopefully just like my fastball but slower," he said. And the trouble in developing it was just like the trouble with learning the new submarine mechanics overall. After the Athletics asked him (it took "three weeks of talking on the phone" to be convinced), he dedicated himself to the new mechanics. A bit of body soreness later ("everything was aching at first") and he was used to it.

It's cheating to say that Ziegler's submarine change is the rarest pitch in baseball. There are only three true submariners pitching right now. But it also seems like the physics of throwing a changeup from down under make things difficult. Try to mimic pulling down on the inside of the ball from that angle, and you'll see that it is difficult to pull off.

Not to Ziegler, not anymore. "I feel pretty comfortable throwing the change more," he said after all the hard work he put in between 2012 and 2013. With a 19% whiff rate and a 67% groundball rate in 2014, that change is now among the best in the game from any slot.

Alongside his crazy sinker, the pitch helps make Ziegler's a unique arsenal. And fun to watch.