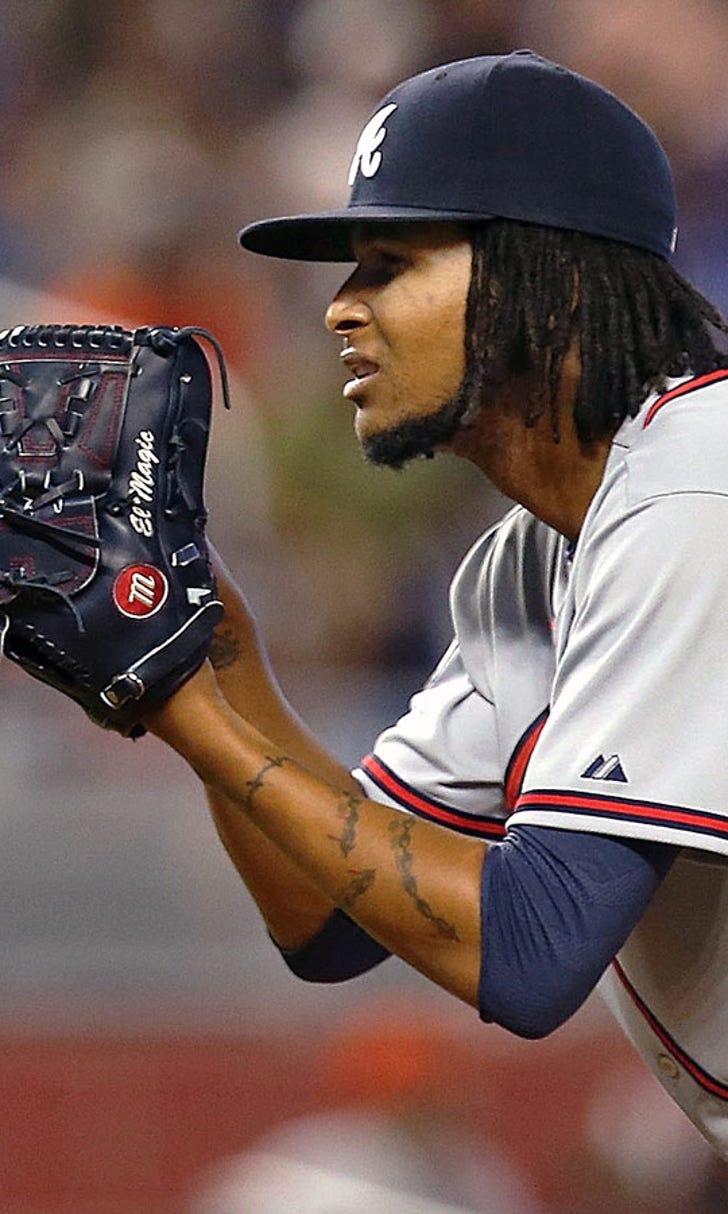 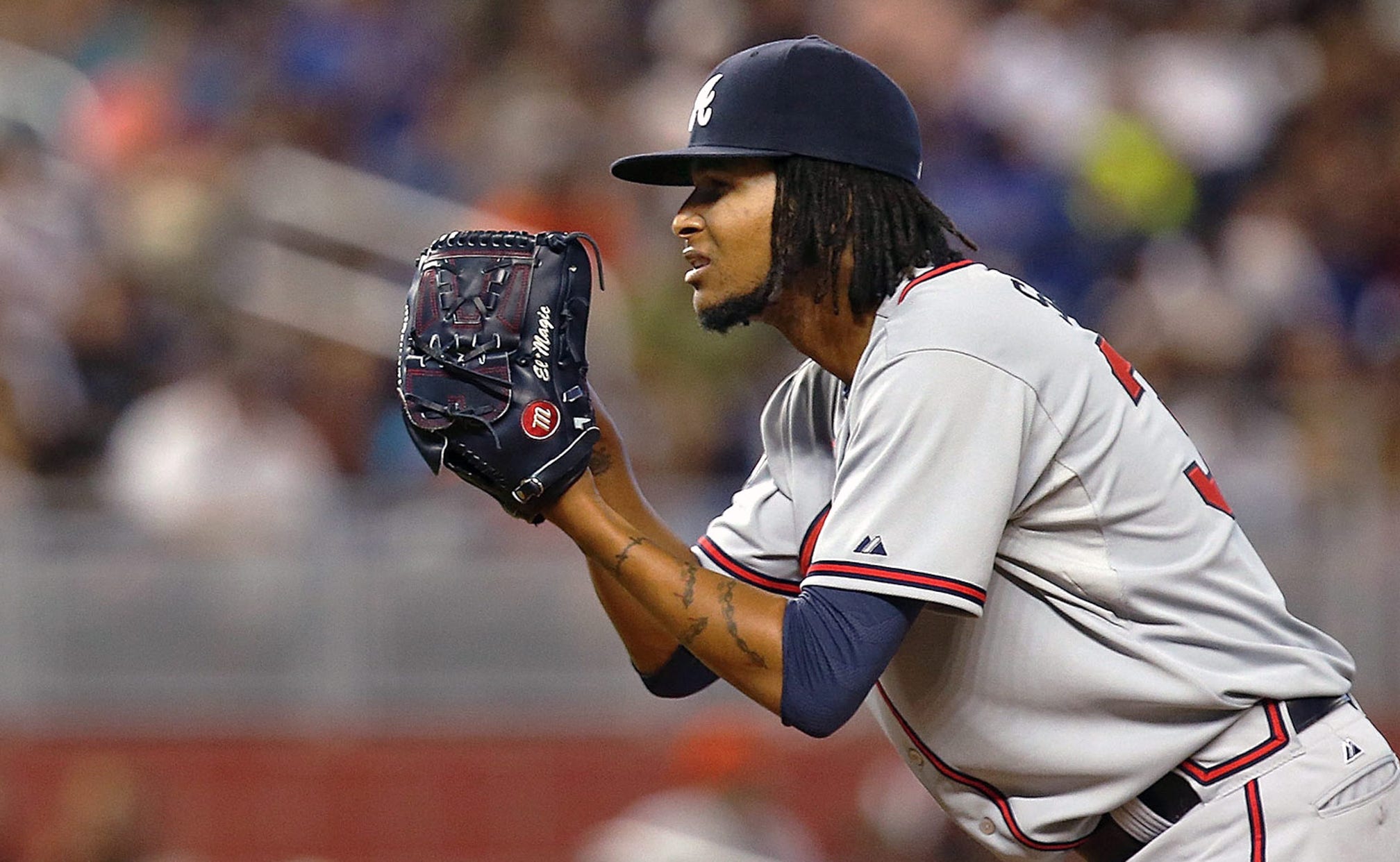 Last Thursday, the Ervin Santana era in Atlanta came to an end. Santana, who spent last year with the Braves and will forever be the answer to the trivia question "Who was the starting pitcher at my daughter's first baseball game?", agreed to a four-year deal with the Minnesota Twins.

Santana's deal was likely closer to the deal that Santana thought that he would get last offseason when, carrying the qualifying offer tag, he didn't sign until spring training. And his one-year deal with the Braves that looked suspiciously like ... the qualifying offer he had turned down a few months earlier. Going back to that time, it was something of a shotgun marriage between Santana and the Braves. The Braves had just lost Kris Medlen and Brandon Beachy, two-fifths of their projected starting rotation, to Tommy John surgery. They were in need of warm bodies to go out every fifth day and throw 100 pitches. Santana was available, but still carried the penalty of a team losing its first-round draft pick, something that teams (rightfully) place a large amount of value on.

At the time, the Braves were criticized. Santana was obviously a short-term solution. It smelled like a panic move on the part of the Braves. Why give up a first-round pick for what would likely be a Band-Aid? Instead, I think the Braves inadvertently (or maybe purposefully) created the Ervin Santana gambit.

In the game of chess, a gambit is a move that at first doesn't make sense. For example, a player might move a pawn to a place where it can obviously be taken on the next move and that there is no chance for a counter-move that will re-capture another piece (so that the move is basically an even exchange). The player who uses the gambit is hoping that by sacrificing a piece, it tempts the opponent into something that turns out to be to the player's long-term advantage. As someone who regularly plays the Queen's Gambit (and regularly loses) I'm rather fond of a good strategic ploy.

Consider the end result of the Santana era for the Braves. He cost them roughly $14 million in salary, but he pitched 196 innings, put up a respectable 14-10 record with a slightly below average but not horrible ERA of 3.95. He was, as the saying goes, exactly what was on the label: a durable pitcher who could throw (almost) 200 league-average innings. That's valuable to any team. The Braves didn't make the playoffs, but at the end of the year, when Santana's contract ran out, they got their pawn back. The Braves made Santana a qualifying offer, which (like the Queen's Gambit often is) was declined. Unfortunately, because Santana signed with the Twins, whose first-round pick is protected, the Braves didn't get the full benefit, but they did get something back.

The stroke of genius was in the one-year offer. Santana was the sort of player who seemed to be the bane of the qualifying offer system. Yes, he was worth one year at $14 million to someone who had no draft pick on the line. But with the value of even a mid-first round draft pick being somewhere around $8 million-$15 million, depending on whom you ask, he wasn't good enough to justify that sort of extra expense plus his salary demands. Enter the Braves.

Using Baseball Prospectus' wins above replacement player stat (WARP), I looked to see what the chances were that a player who was league-average or better (normally, an average regular player puts up 2 wins, which is the cutoff I used) would continue to be league-average in the following few years. Given the rough thumbnail number of $7 million per win, a 2-win player would be worth about $14 million on a one-year contract, conveniently almost exactly matching what a the qualifying offer threshold was last year.

For position players (2003-2013), 57.6 percent of players continued to be league-average in the following year, then dropped to 52.2 percent after two years, and then 50.4 percent after three years. Looking specifically at players like Santana who were good enough to be league-average but not superstars (a WARP of 1.5 to 2.5 in the initial year), 40.8 percent were worth 2 wins or more in the next year, which fell a bit to 38.7 percent after two years, and 38.6 after three years.

You could make the argument that Santana was a better bet because as a "reliable starting pitcher," he would be more likely to have a strong market for his services. Teams will be willing to pay for the line on his resume that says "Can pitch 200 innings and not fall apart." However, the numbers that we calculated above are probably a good place to start. By signing Santana to a one-year deal at the beginning of 2014 and forfeiting a first-round pick, the Braves had something like a 50-60 percent chance of having a free-agent-to-be on their roster at the end of 2014 who would be worth a qualifying offer, and who could net the Braves a first-round pick when he went off to look for greener pastures. Or at least a greener contract. The Braves had a 40-50 percent chance of never seeing that draft pick again, and a 50-60 percent chance of merely having it shifted back one year.

Now, the gambit could have backfired on the Braves. Just ask the Twins, who signed Kendrys Morales (and then sent him back to the Mariners) or the Red Sox, who re-signed Stephen Drew (and then traded him to the Yankees). Both men had their markets disappear because of the qualifying offer that they had declined at the end of the 2013 season, and both functioned below replacement level in 2014. Rules prevent players from being traded midseason from being given qualifying offers, but I think it's safe to say that neither would have been given one.

If the Ervin Santana experience teaches us something, it's that a team signing a qualifying free agent is signing a player (and losing a draft pick), but is also signing the right to make that same player a qualifying offer when the contract ends. And the shorter the term of the deal, the more likely it is that a team will want to do that. On a one-year deal, you could make the case that a team has something of a half-and-half shot of recouping its draft pick. Therefore, we should stop seeing teams signing qualifying free agents as giving up a draft pick. We should see them as taking a calculated risk. In expected value terms, they are really only surrendering half a draft pick on a one-year deal. Now, that's not cost-free, but for a team in a tough spot, the now-reduced added cost might just be worth it after all.

It's a bit of hope for the 'tweener class, those guys who are good enough for 1/$14M and no lost draft pick, but not for 3/$35M and a lost draft pick. If a player reaches spring training not having signed, he might have to settle for a one-year deal, but there's a case to be made that a one-year deal makes more sense than is generally believed. At least he won't have to deal with what Drew and Morales did, losing a couple of months of playing time.