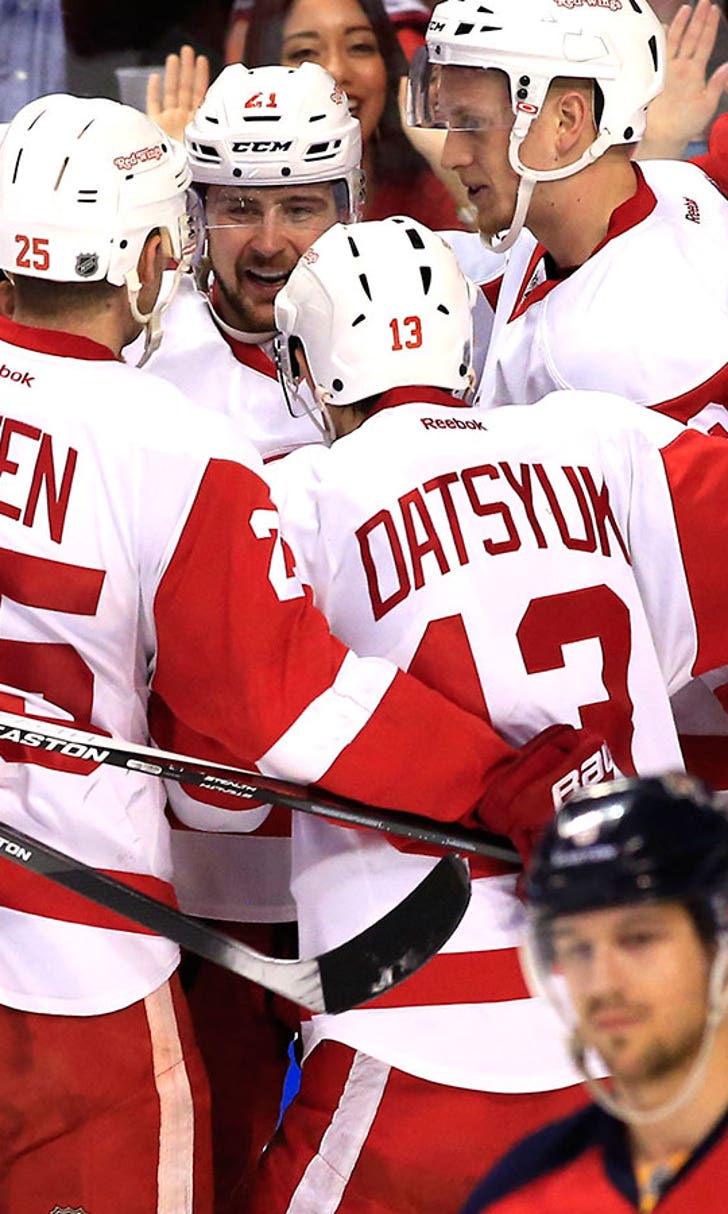 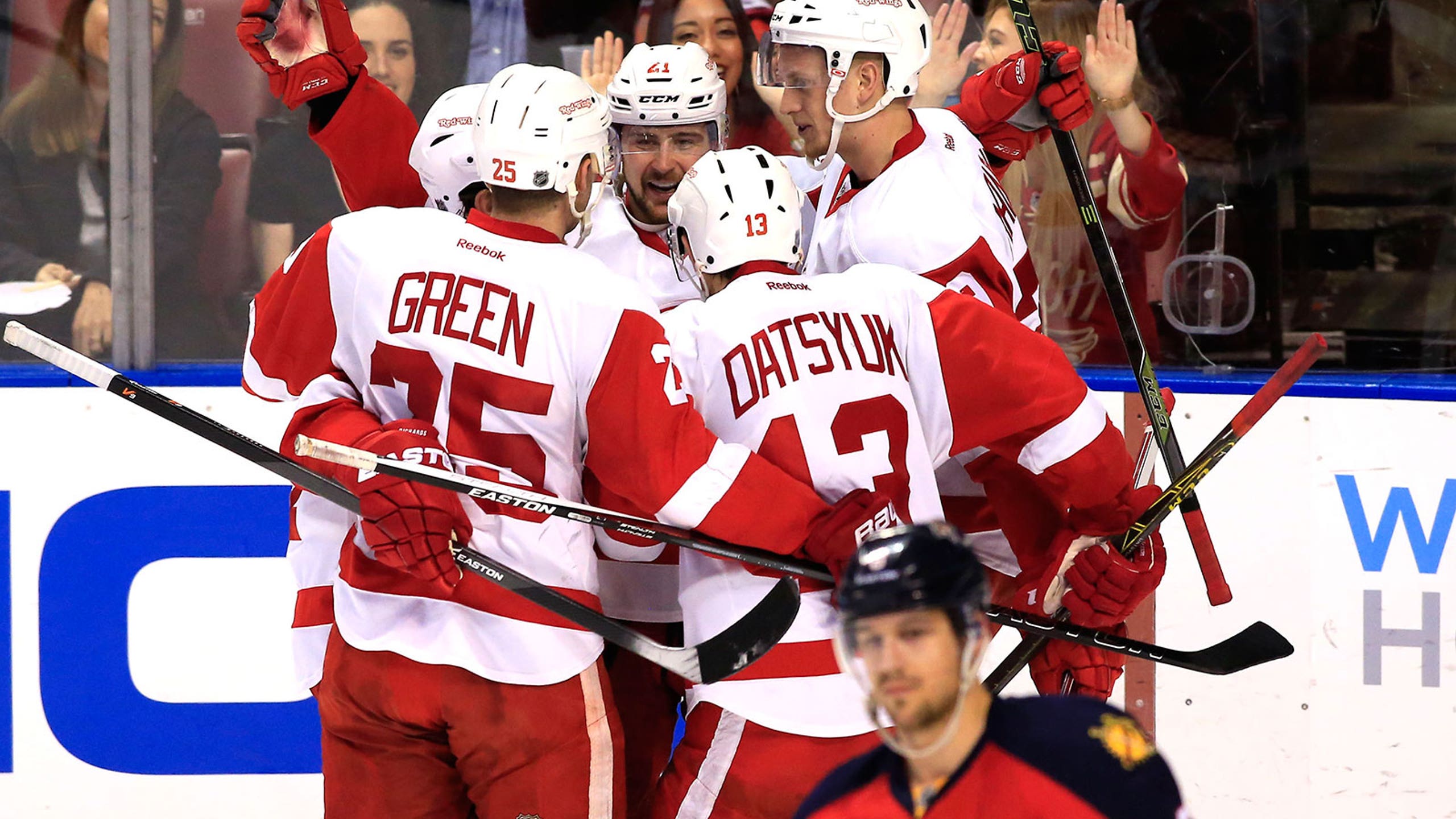 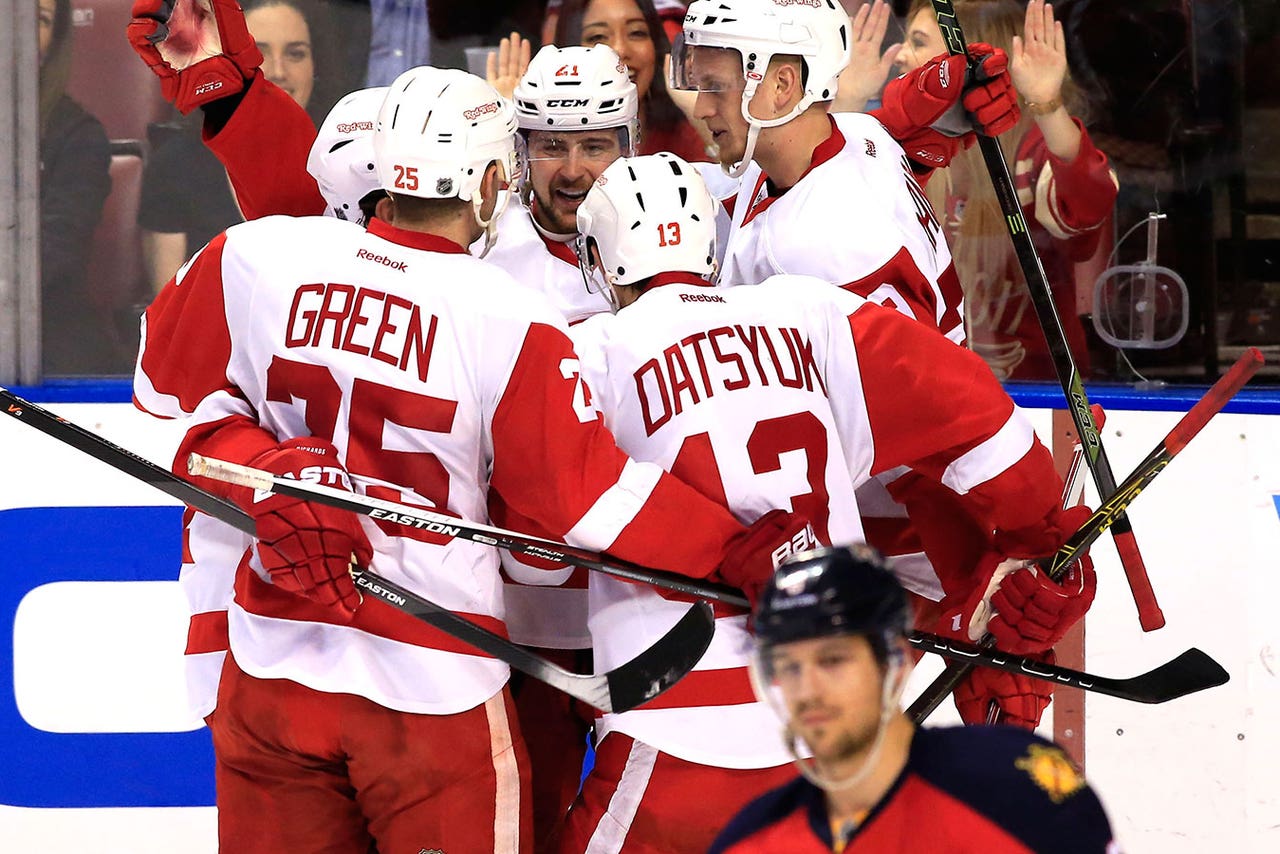 SUNRISE, Fla. (AP) -- The Detroit Red Wings took another step in their quest for the playoffs.

Luke Glendening scored the go-ahead goal, Pavel Datsyuk had two goals and the Red Wings rebounded from a two-goal deficit and topped the Florida Panthers 5-3 on Saturday night.

The Red Wings won their second straight and lead the Philadelphia Flyers by three points for the final wild-card spot in the Atlantic Division. The Flyers lost to the Pittsburgh Penguins 4-1 earlier Saturday.

Dylan Larkin had a goal and an assist, Tomas Tatar also scored and Niklas Kronwall recorded two assists for the Red Wings, who got 23 saves from Jimmy Howard.

The Red Wings are hoping to extend their streak of 24 consecutive playoff appearances.

"We had some good signs tonight," Howard said. "We need to continue to build. It's another step in the right direction."

Teddy Purcell, Vincent Trocheck and Nick Bjugstad scored, and Roberto Luongo made 25 saves for the Panthers, who lost for the first time in three games.

"We just didn't play well, didn't play hard, didn't compete enough," coach Gerard Gallant said. "Detroit wanted it more and they went out and got it."

Academy Award-winning actor Kevin Spacey attended the game in support of the Panthers. The team honors the star of each winning game with a "Spacey-in-Space" hooded sweatshirt, featuring Spacey's head floating in space. Unfortunately for the Panthers, they didn't get a chance to award the hoodie after the loss. He visited briefly with the Panthers players in their locker room after the game.

"He came in after (and) we said hi to him," Bjugstad said, "It wasn't as fun as if we would have won, the environment in the locker room. We're down a little bit. We definitely appreciate him coming down, supporting the team."

Spacey's appearance on the scoreboard drew a huge roar from the crowd, many of whom had masks of Spacey's face.

"He congratulated me on my new contract and said he wanted a piece of it," said Panthers center Aleksander Barkov, who got a $35.5 million extension over six years.

Even the Red Wings were excited by Spacey's appearance.

"It was pretty cool seeing Kevin Spacey in the stands," Larkin said. "The crowd got pretty crazy, so that was a cool moment."

Glendening broke a 3-3 tie when he was able to deflect a shot by Larkin from the point and the puck landed just across the goal line in the corner of the net at 8:39 of the third.

"I just threw it on net and (Glendening) did a great job being there," Larkin said. "To continue being successful we've got to get to those areas and win battles like he did."

An empty-net goal by Datsyuk with 37 seconds left made it 5-3.

Trailing 3-1, the Red Wings closed within a goal on a power-play score by Datsyuk with 11 seconds left in the second. The puck trickled past Luongo through traffic in front. Luongo angrily threw the puck and claimed he was interfered with by Justin Abdelkader, who was standing near the goal line when the puck went in.

The late goal seemed to shift the momentum back to Detroit.

"It's a huge goal," Red Wings coach Jeff Blashill said. "You come into the third and you're down one, it's a huge difference. And you just got to find a way to continue to claw back."

Larkin tied it at 3 when his wrist shot from the right circle got inside the post on Luongo's glove side with 16:08 left in the third.

"I got a fortunate bounce right on my stick, and I saw Luongo cheating a bit, so I just ripped it," Larkin said. "I was lucky it went in."

The Panthers missed a chance to extend their first place lead in the Atlantic Division.

"You have a (two)-goal lead with a couple minutes left in the second period and we take a penalty and let them score on special teams," Purcell said. "That gave them some momentum. They kept pushing in the third. You have to give them credit, they found a way."

NOTES: Purcell's goal was the 100th of his career. ... Panthers D Jakub Kindl faced his former team for the first time since the Red Wings traded him to the Panthers on Feb. 27. ... Panthers D Eric Gudbranson missed his third game with a lower-body injury. ... Kronwall returned for the Red Wings after missing three games with a sprained right knee. ... The start of the game was slightly delayed when an octopus was thrown on the ice just before the puck drop. ... Attendance was 20,817, a franchise record for a regular-season game.