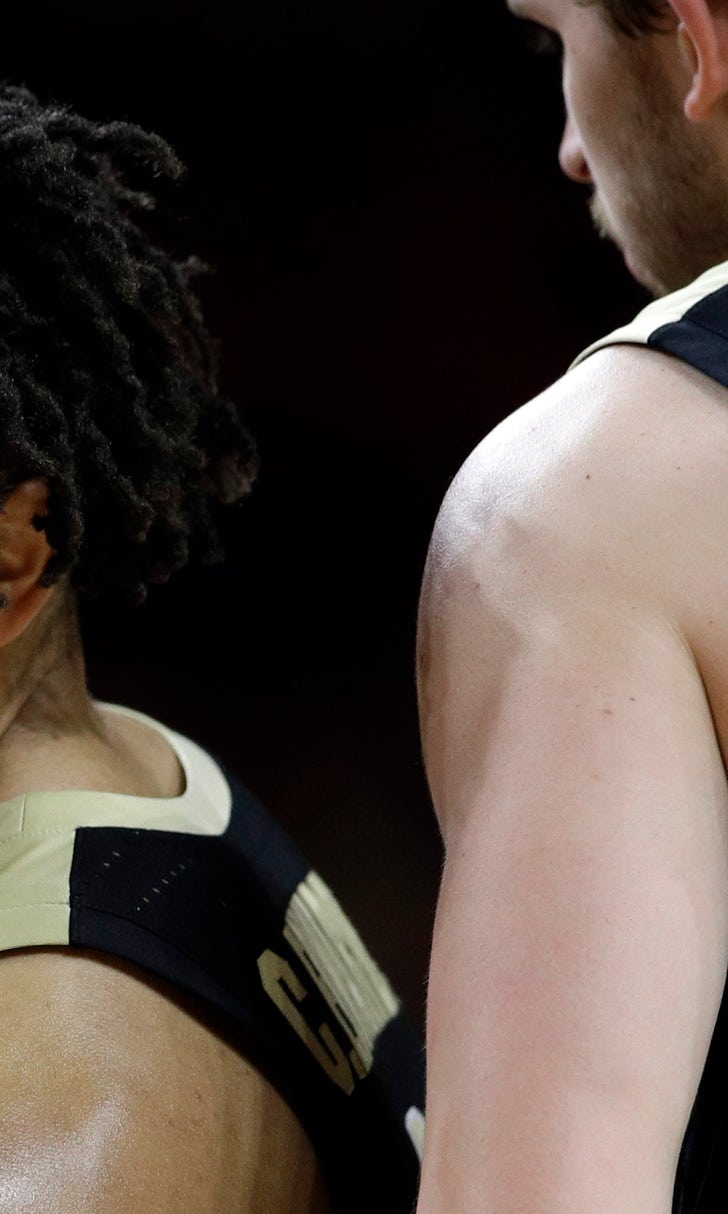 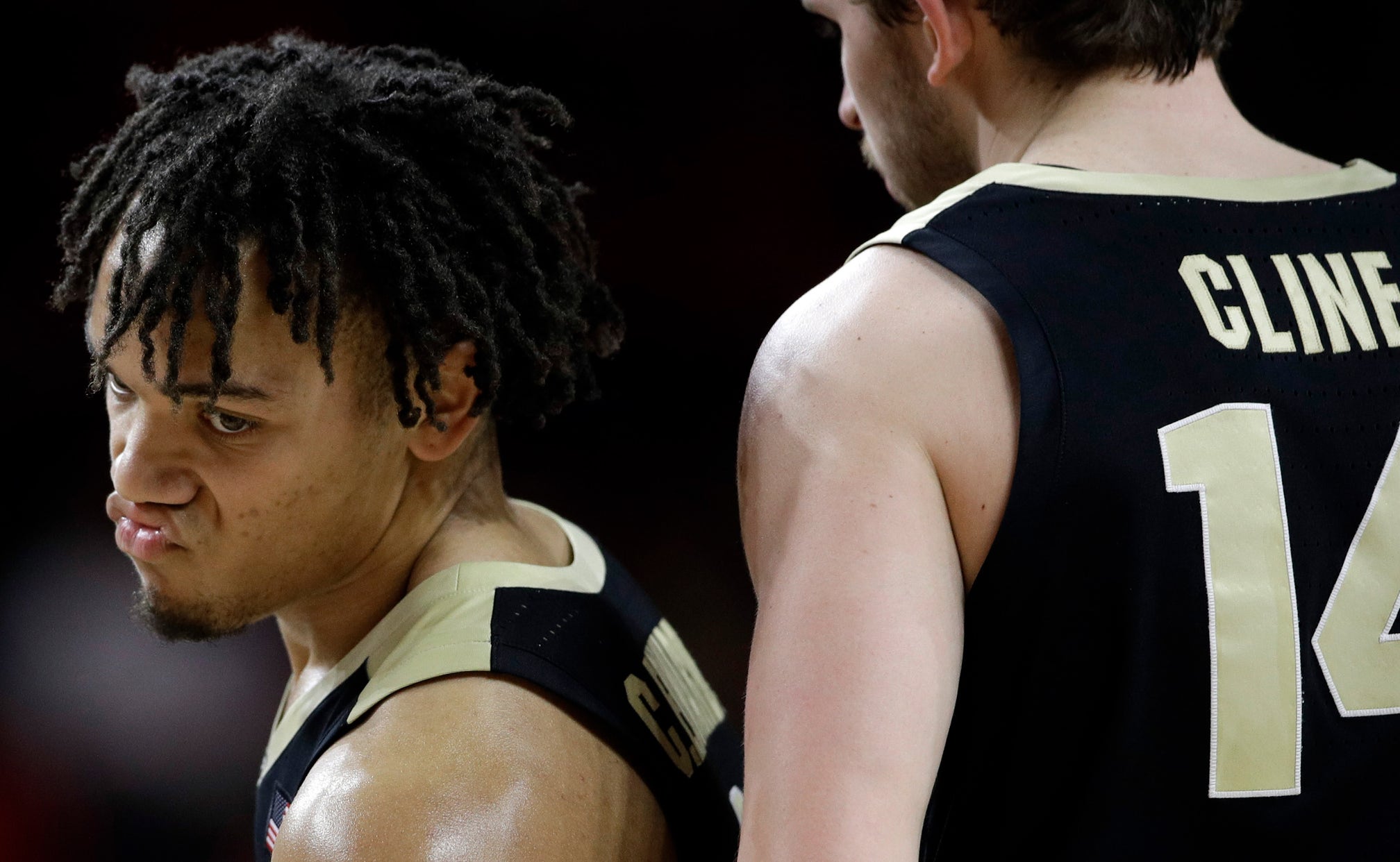 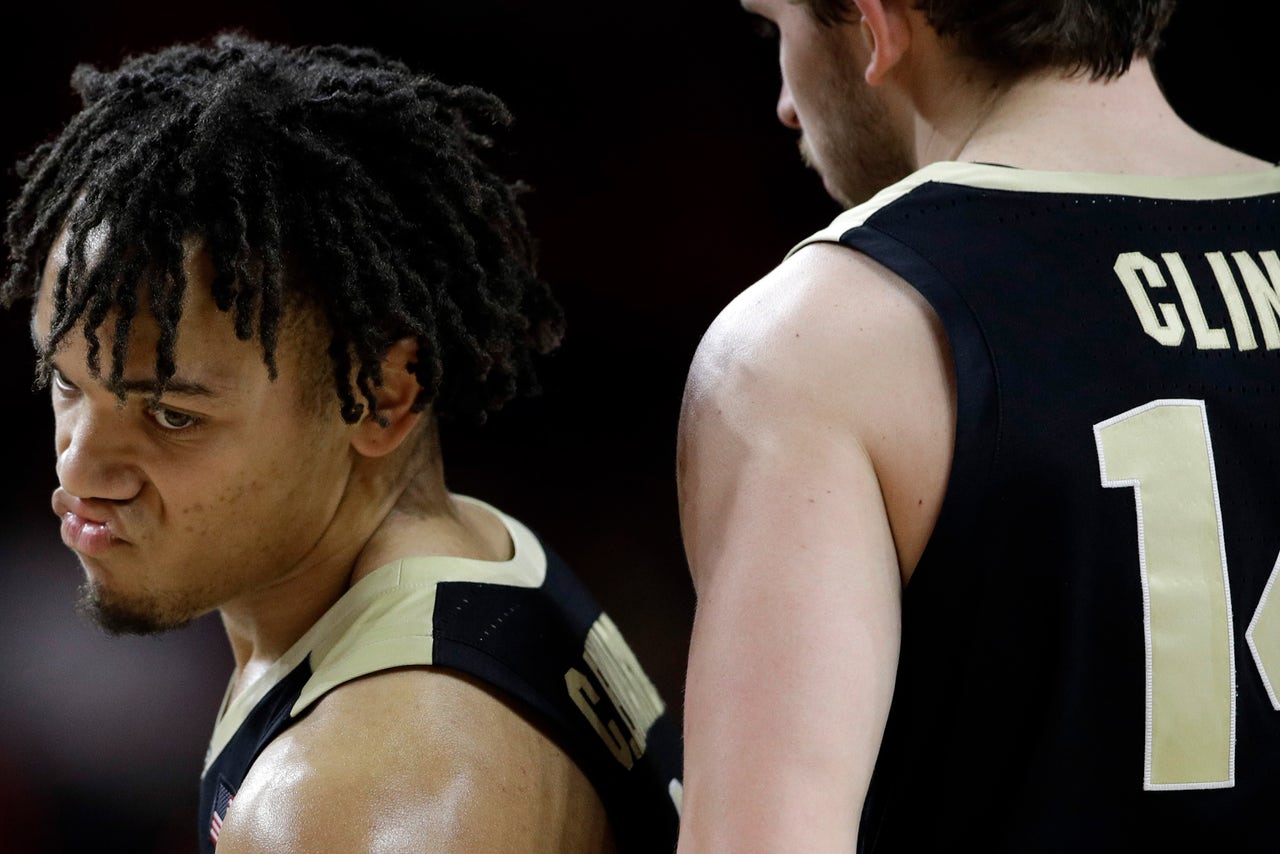 COLLEGE PARK, Md. — Halfway there in its bid for a ninth straight victory, No. 12 Purdue suddenly became incapable of making a layup, popping a short jumper or sinking a shot from beyond the arc.

It was a shortcoming that could be attributed in no small degree to a relentless defensive effort by 24th-ranked Maryland.

Jalen Smith scored 14 of his 16 points in the second half, and the Terrapins frustrated the Boilermakers and sharpshooter Carsen Edwards in a 70-56 victory Tuesday night.

Down by eight at halftime, Maryland (19-6, 10-4 Big Ten) took the lead for the first time with 10 minutes left before pulling away. The comeback was fueled by Smith, Eric Ayala and fellow freshman Aaron Wiggins.

Maryland outscored Purdue 40-18 in the second half, limiting the Boilermakers to 17 percent shooting — including 1 for 16 from 3-point range.

"In the second half, they were just making it harder on us," Purdue coach Matt Painter said. "We had some open looks that didn't go down. We had some (forced shots) that we'd like to have back. But there were still a lot of possessions in between that Maryland's defense was just better than our offense."

Ayala scored 15, Anthony Cowan Jr. added 12 and Fernando Bruno had 12 points and 12 rebounds, his seventh straight double-double and 16th of the season. Wiggins scored 11 on 4-of-6 shooting.

"We get better every possession," coach Mark Turgeon said of his band of youths. "We're really coming. Defensively, we're really getting at a high level and our half-court offense was really good in the second half."

Edwards scored 24 for Purdue (17-7, 10-3) but was limited to seven points after halftime on 2-for-13 shooting. The Boilermakers finished with four turnovers and grabbed 17 offensive rebounds, but they couldn't get the ball in the basket over the final 20 minutes.

"It's pretty amazing what this young group is doing defensively," Turgeon said.

Purdue had won five straight over Maryland, including a 62-60 decision Dec. 5.

Maryland made its first three shots of the second half and held the Boilermakers to 1-for-11 shooting during a 10-2 run that tied it at 40.

Edwards responded with a layup and 7-foot-3 Matt Haarms added three free throws for a 45-42 lead, and Edwards buried a 3-pointer for a six-point cushion.

Successive threes by Ayala again knotted the score, and Maryland took its first lead when Smith slammed home an alley-oop pass from Cowan.

It was 50-all before Wiggins drilled a 3 to put the Terrapins ahead for good.

Edwards scored 17 points and the Boilermakers committed only two turnovers in taking a 38-30 halftime lead.

Maryland missed its first seven field-goal tries, five by Smith, to fall into a quick hole. Purdue led 26-17 before Fernando took his first shot, an alley-oop dunk off a pass from Darryl Morsell.

After the Terrapins cut an 11-point deficit to 33-30, Edwards made two foul shots and Ryan Cline nailed a buzzer-beating shot from well beyond the arc.

"Coming into halftime, we didn't feel we were playing as tough as we could," Ayala said. "In the second half we played with passion, with love for the game. It showed."

After Maryland worked its way back into the game, then fell behind again, Ayala's consecutive 3-pointers were pivotal.

"That was huge. That was the game," Painter said. "We don't lose the game right there, but were also in a position to push that lead and we don't."

Purdue: The Boilermakers appeared well on their way to their fourth straight road win before coming up cold in the second half. Painter hoped the Boilermakers could learn from this and apply the lesson over the final seven games.

Maryland: The Terrapins improved to 6-0 at home in the Big Ten, despite allowing Purdue to snag 17 offensive rebounds. Still, there's no complaining about a 10-4 start in the conference for a team with only two seniors, neither of whom played in this game.

Purdue: Hosts Penn State on Saturday, a rematch of a Jan. 31 game won by the Boilermakers in OT.

Maryland: At No. 6 Michigan on Saturday.