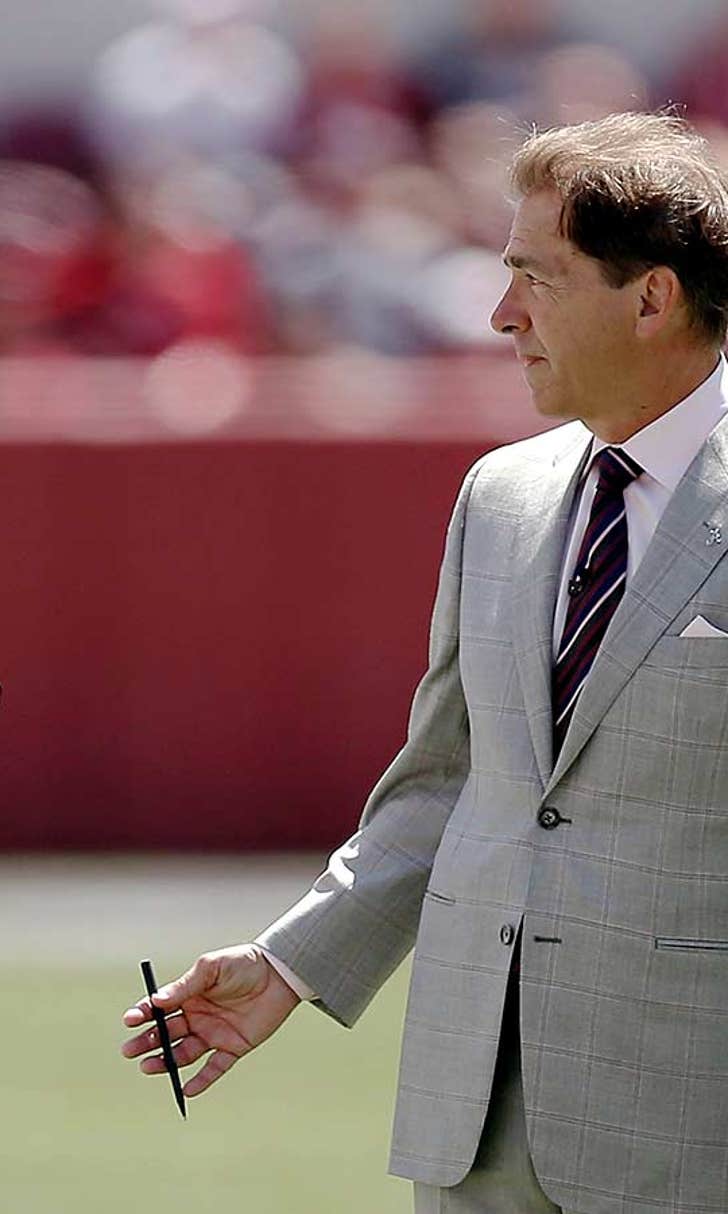 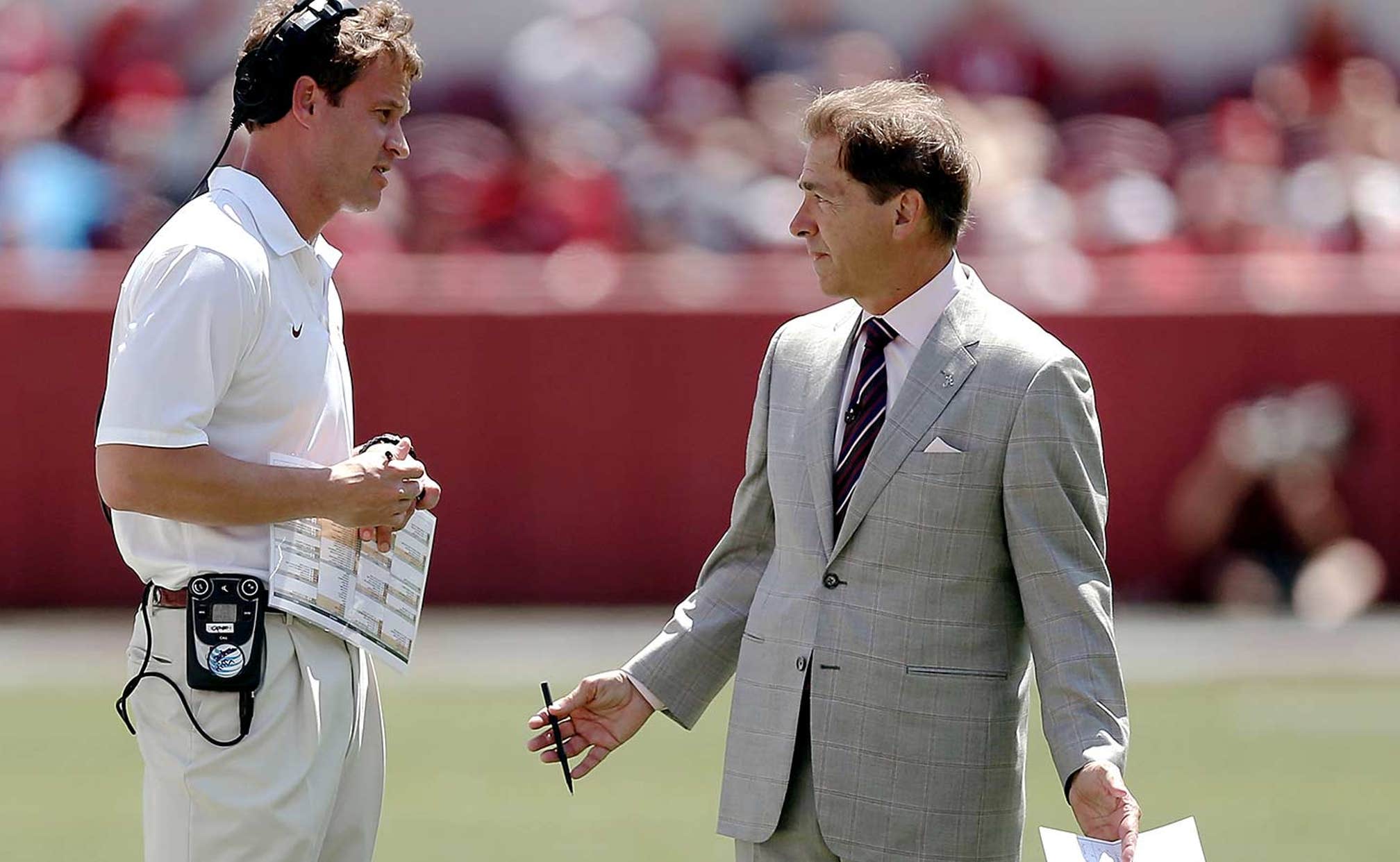 Nick Saban and Lane Kiffin: The Real Housewives of the SEC 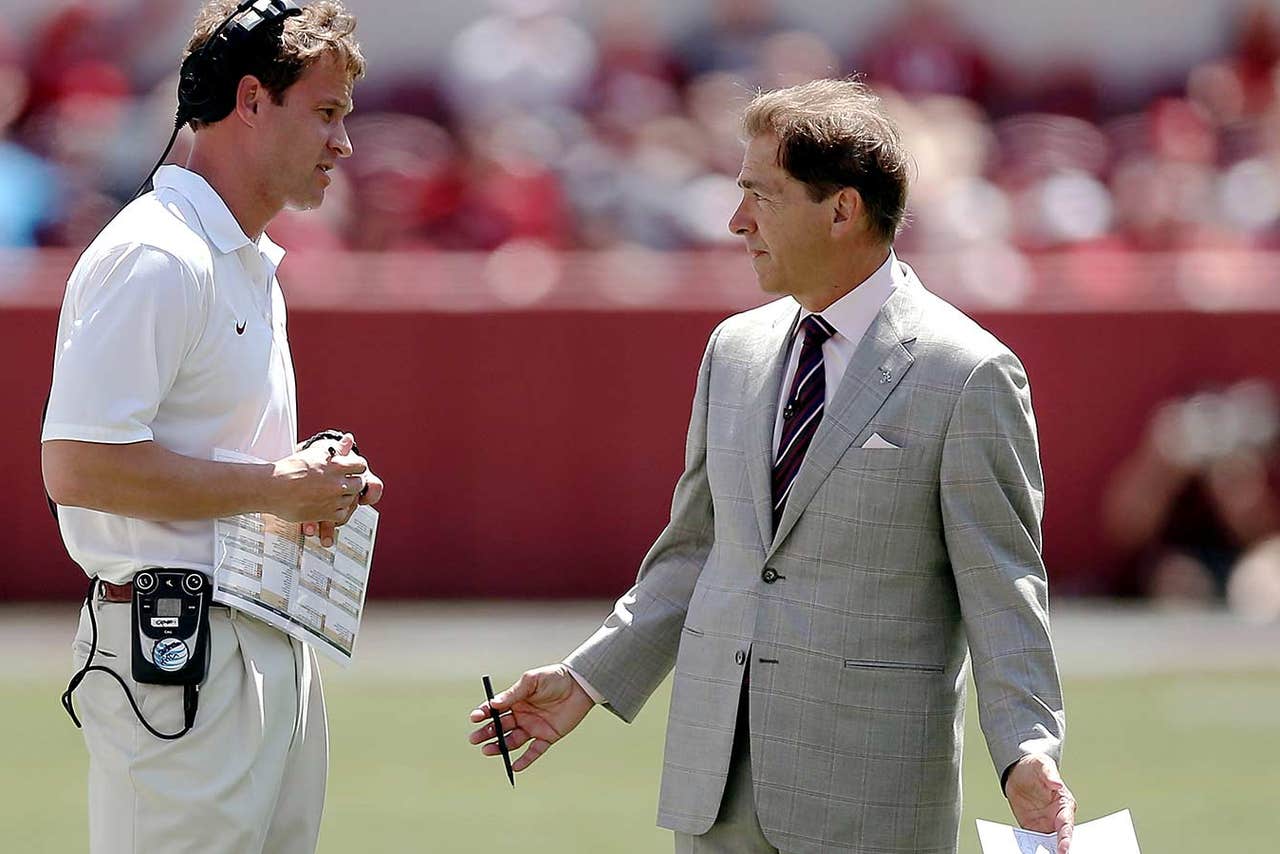 They're status obsessed, they bicker, they're engaged in a catty power struggle, they emote, they roll their eyes at one another in public, eternally unpleased with the actions of the other. Then when asked about their conflicts, they dismiss them as contrivances of our own imagination. Nick Saban publicly announces there's no issue, praises his counterpart, says Lane Kiffin's the best. Saban says it all without smiling, with that catty, glacier-like stare, as if every sentence he answers should be accompanied with a two word conclusory epitaph, "Bitch, please." For anyone who watched Alabama play West Virginia it was evident that Alabama's two trophy coaches, Nick Saban, the one with the actual trophies, and Lane Kiffin, the one who has thus far served as a trophy repellent, are the real housewives of the SEC.

If you're a married man, you've seen these shows on Bravo. My wife is obsessed with them. So much so that whenever he sees my wife watching these shows our three year old says, "Mommy is watching the mean girls show again." Alabama's sideline is a mean girls show, the OC meets the SEC. Saban, who has made a living with his cantankerous scowl, has a new foil who has also made a living with his emotionless sideline affects; no matter what he does Kiffin's a blank slate of ennui. Between the two of them Saban and Kiffin have not smiled on the sideline since Kiffin was in diapers back in 1978. Everything you have to say about them or what they do -- and I mean everything -- is a waste of their time, forcing them to descend to your plebeian levels of discourse. If Saban and Kiffin ever deigned to take a selfie -- they wouldn't, of course -- they're the only two men whose emotionally vapid natural facial expressions mirrors Paris Hilton's.

Yep, it's a housewife drama in the SEC. Will Kiffin stay on the sideline to mentor his new quarterbacks or will Saban banish him to the booth? Who gets to call the timeouts, what about the fourth down play calls? Every angry gaze tells a story, every brusque riposte a chapter in the eternal housewives war. Will Saban, the man who once sent a private jet to Michigan State with promised jobs for anyone who climbed inside only to have the jet return empty, relinquish any power to his upstart protege? Will Kiffin, the one-time hot new girl on the scene that everybody wanted in Hollywood, now back busing tables after her sugar daddy kicked her to the curb, reclaim his past glory? Or will he forever seethe in the shadow of Nick Saban, the ultimate mean girl?

Oh, it's such delicious entertainment, vapid and sweet, like the best housewives shows brought to the sideline. Mock your wife or girlfriend if you will, but it's addictive, isn't it? Will Vicky and Tamara ever stop feuding over Vicky's boyfriend and will Tamara ever stop trying to turn people against Vicky behind her back? Oh, you Tamara, you're just like Lane Kiffin, things are about to blow up in your face!

The drama builds with each game. Will Kiffin keep Blake Sims at quarterback or will Saban exercise his veto, and bring in Jacob Coker? Sure, you play Florida Atlantic this weekend, but that's like a trip to a luxury spa in Palm Springs -- or a trip to Saban's lake house in North Carolina -- where there will be an artificial bonhomie while the two of you run up 700 yards of offense. That won't last though.

What about when the real SEC games begin and the real housewives of the SEC head to Oxford or Baton Rouge and experience some actual stress in their relationship? Hell, you think that's bad, what about when Kiffin goes back to Knoxville and becomes the first housewife to be murdered by a jealous ex-lover? One that's likely to be wearing overalls and carrying a jug of moonshine. But that's in the future, for now, you have to stay tuned to the most intriguing drama in the SEC since Johnny Manziel signed all those autographs for "free" and Cam's bag man delivered his sacks of cash and then vanished into the still Southern night.

Nick Saban and Lane Kiffin, two mean girls on one Southern sideline, like Dukes of Hazzard if everyone hated Bo and Luke Duke. The Alabama sideline is a powder keg of emotion, and with one spark -- BANG -- everything blows right up. I can't wait until the inevitable explosion happens. Neither can you. Because the Real Housewives of the SEC is the fall's newest reality sensation. Stay tuned, the drama's just getting started.