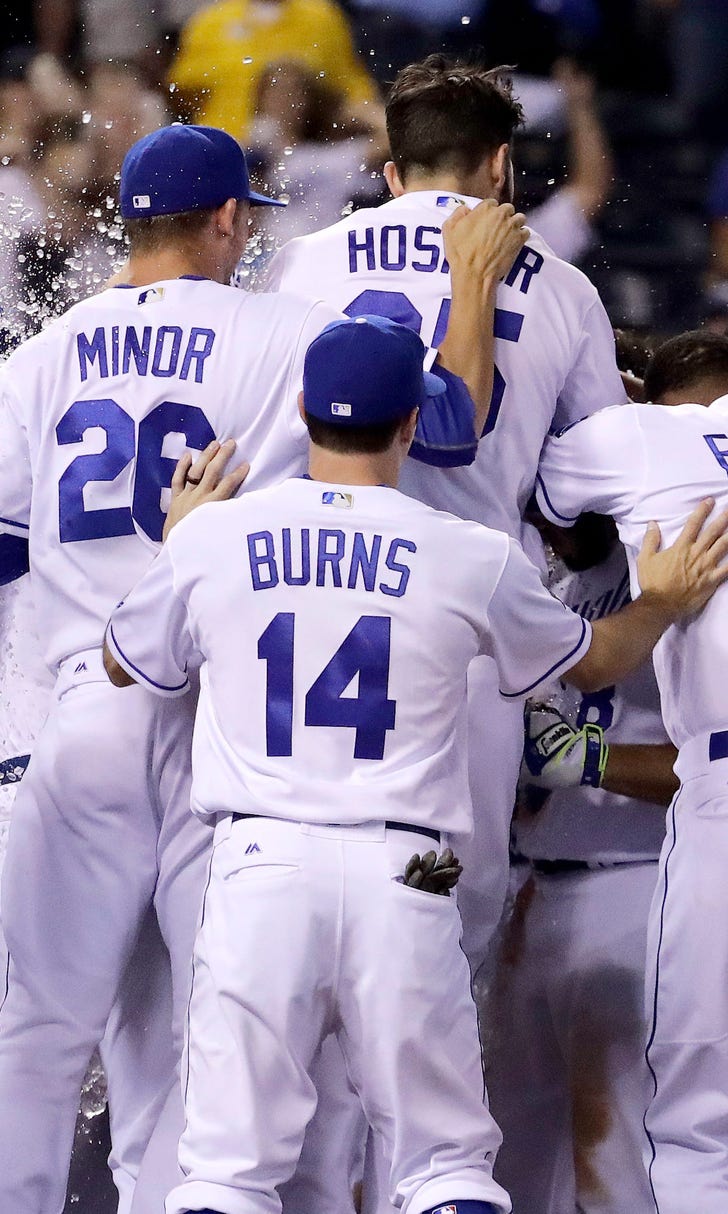 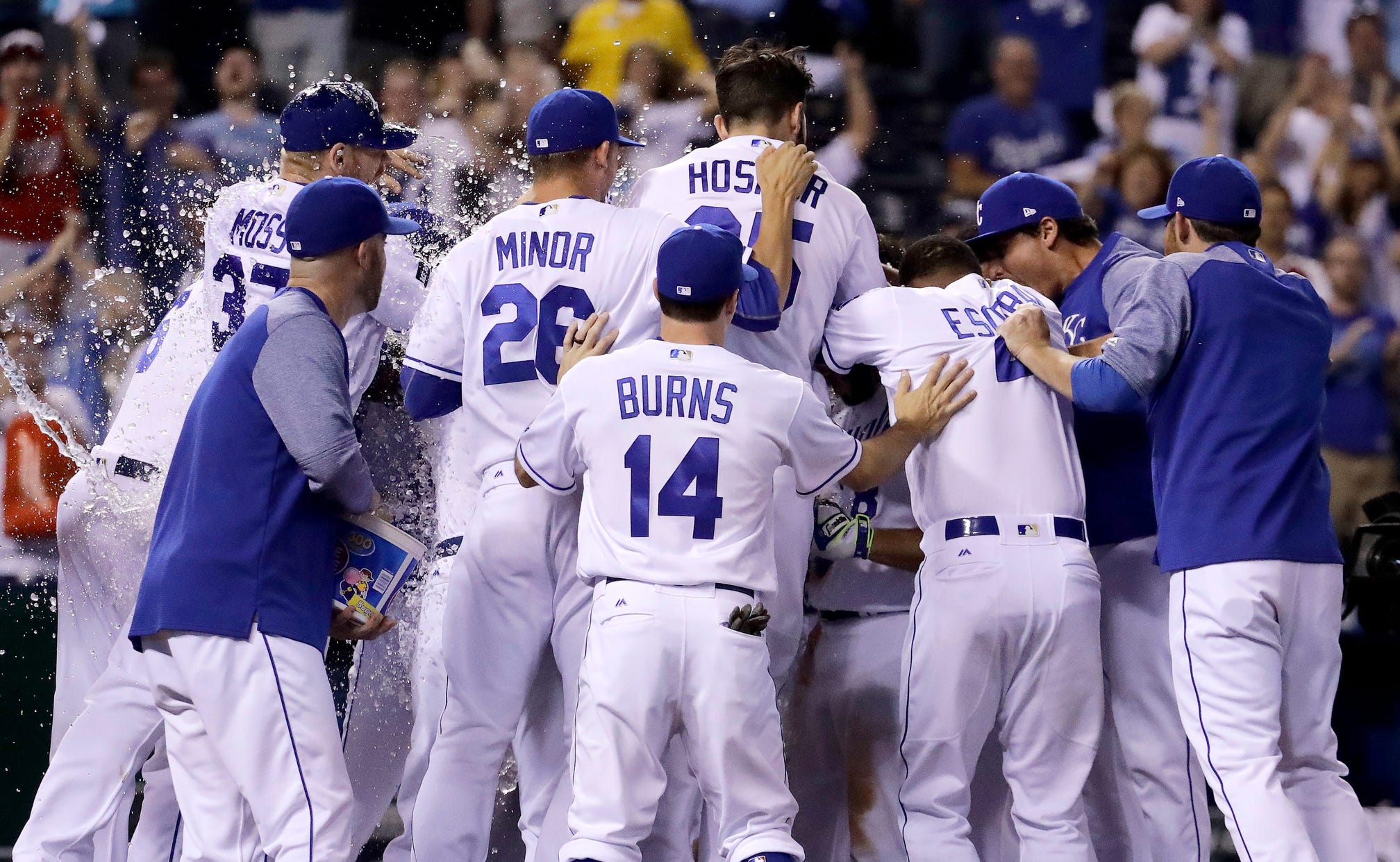 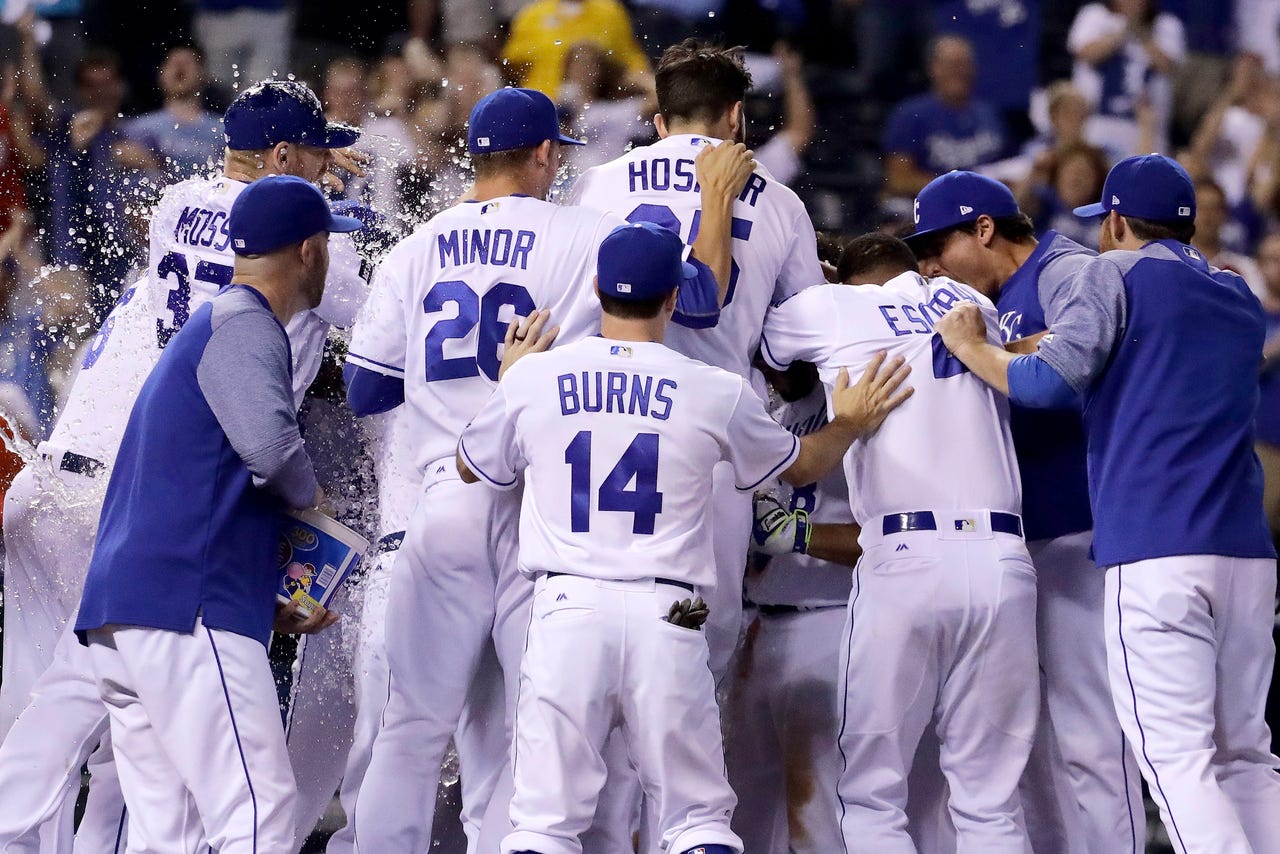 Moustakas hit a two-run shot with two outs in the ninth inning after Kansas City rallied from a six-run deficit, and the Royals snapped the Houston Astros' 11-game winning streak with a 9-7 victory Tuesday night.

Moustakas drove an 0-1 slider from Ken Giles (1-2) out to right with Salvador Perez aboard. Moustakas had four hits and three RBIs.

"He threw a fastball, first pitch, middle in and the guy throws hard," Moustakas said. "I fouled it off and was kind of looking for something out over the plate. Got a slider out there and put a good swing on it."

Kansas City trailed 7-1 in the fourth inning but completed its comeback with a four-run eighth. Whit Merrifield hit a three-run double with two outs in the inning to tie it at 7.

"Giles is kind of a go-get-em from the get go," Merrifield said. "He throws a hundred with a banger slider. Just try to see the ball as early as you can and hope for a mistake. He made one on me, and I was able to put the bat on it and find a good spot."

Merrifield has hit safely in 20 of his last 21 games. Giles blew his second save in 18 opportunities.

"I let my team down," Giles said. "It's all on me. In my eyes, this team won today. My failure shouldn't overshadow what these guys did today. They did exactly what they needed to do. This is going to hurt for a little bit, all night."

The Astros' winning streak was the longest in the majors this season. They dropped to a major league-best 42-17 this season.

Mike Minor (3-1) pitched a scoreless inning for the Royals.

Moustakas also singled in a run during the eighth.

Carlos Beltran hit his 429th career home run in the Astros' four-run fourth, giving them the six-run advantage. Josh Reddick, who had three hits, and Carlos Correa had the other run-scoring hits in the inning.

Houston rookie starter David Paulino gave up three runs and eight hits over 5 2/3 innings and left with a 7-3 lead.

Yuli Gurriel, who had three hits, contributed a two-run single in the Astros' third, giving him 12 RBIs during a seven-game hitting streak. Jose Altuve's sacrifice fly scored George Springer with the first run of the game. Springer extended his hitting streak to 11 games with a double and single. He has nine multihit games and 23 hits total in his streak.

"They won almost every critical moment," Astros manager A.J. Hinch said. "When you do enough of those, they're going to come with a big inning and they did. Certainly they deserve a lot of credit for their at-bats. The walk in there with two outs (to Gordon) kept the inning alive. Then a few too many sliders."

Gordon homered in the third for the Royals, his first since Sept. 25, a span of 192 at-bats.

One of the best Salvy Splashes of the @Royals season! Moose hits a walkoff, gets splashed, Royals win! #RaisedRoyal pic.twitter.com/atUf8z13AH

With Junis recalled, the Royals optioned RHP Seth Maness to Triple-A Omaha. Maness was 1-0 with a 3.72 ERA but allowed 16 hits and two walks in 9 2/3 innings.

Astros: INF Marwin Gonzalez was not in the lineup with a left hand contusion and swelling. "I know he's sore," Hinch said. "We're going to get him a guard to protect his hand when he slides. We'll see how he feels when he holds a bat. We might put something on his bat to alleviate the pressure. We feel good that he's avoided a bigger injury, but he may need a day or two."

Royals: RHP Nathan Karns (right extensor strain and nerve irritation) is not yet ready for a rehab stint as the club waits for the soreness to recede. "He's getting better every day," Royals manager Ned Yost said. "We don't have a timetable yet."

Astros: LHP Dallas Keuchel takes a nine-game winning streak into his Wednesday start. That is the longest streak by an Astros' pitcher since RHP Roger Clemens won nine straight in 2004.