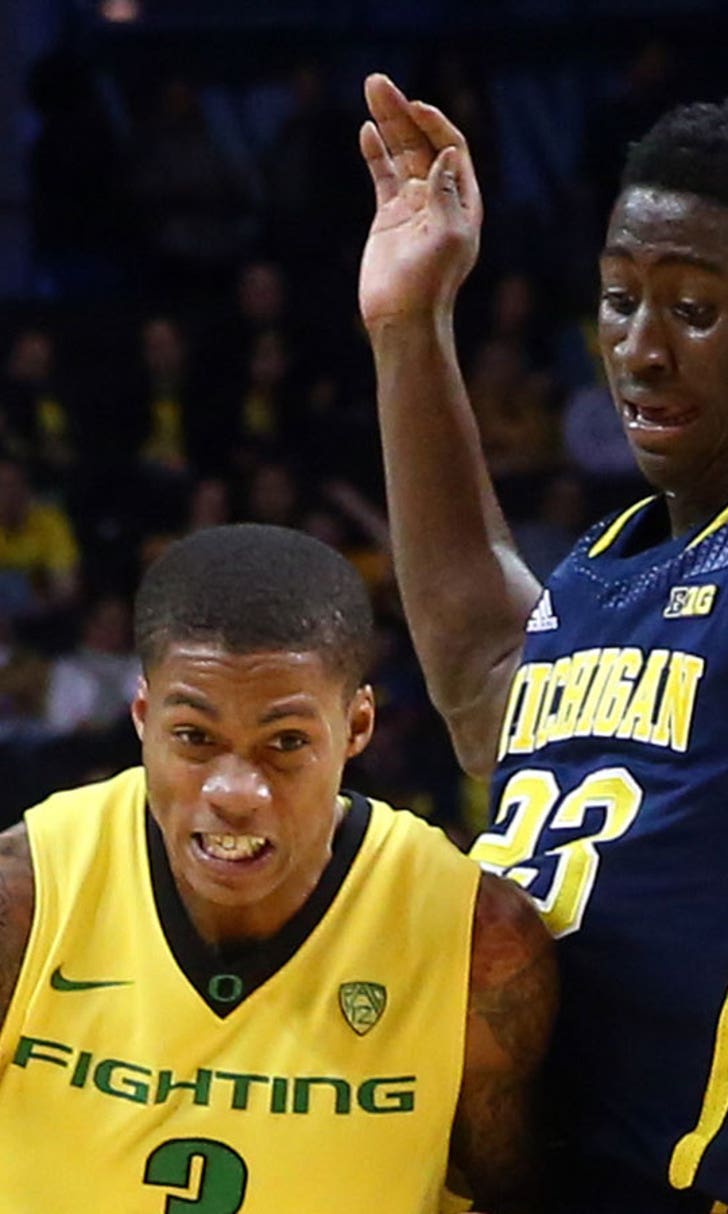 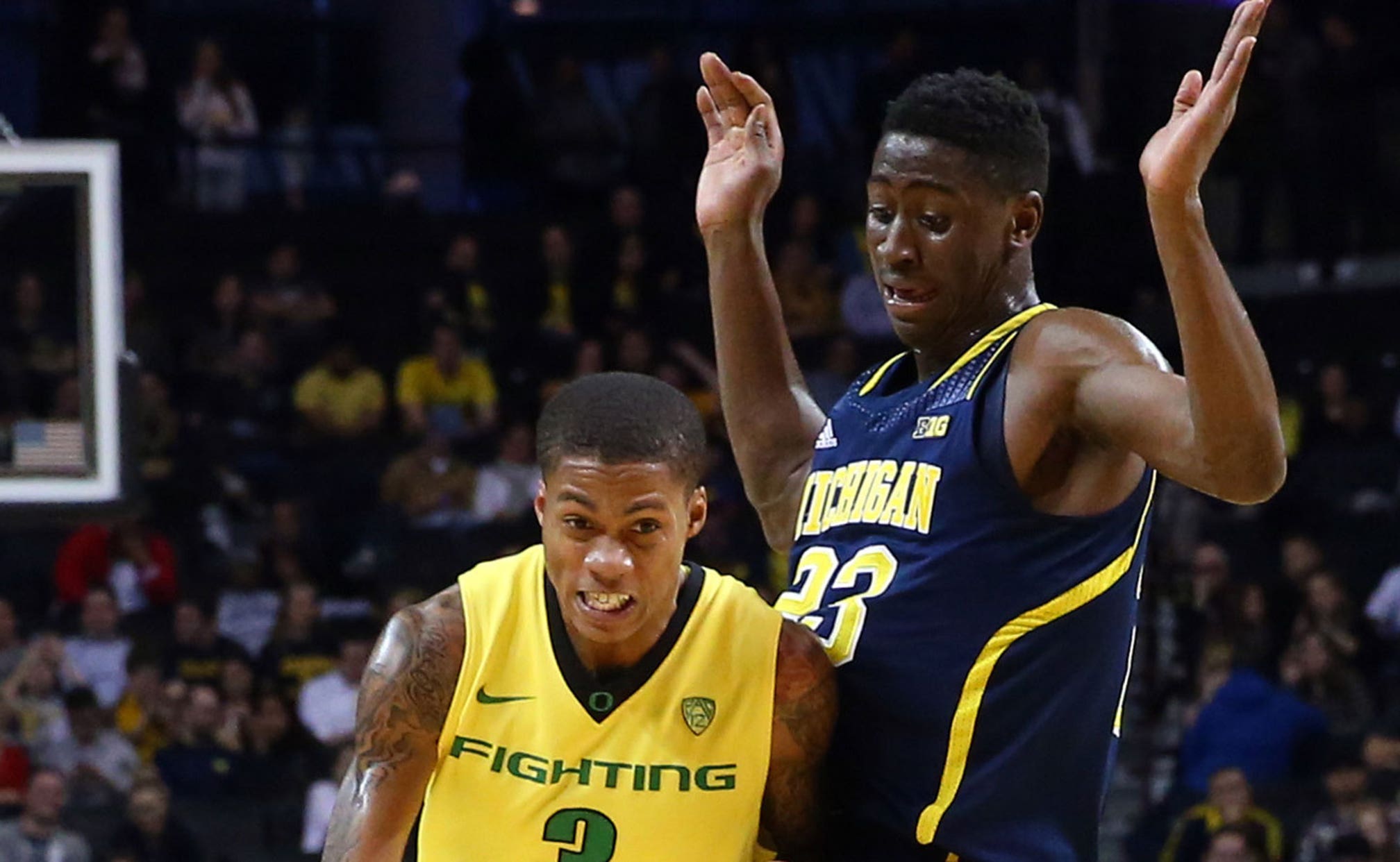 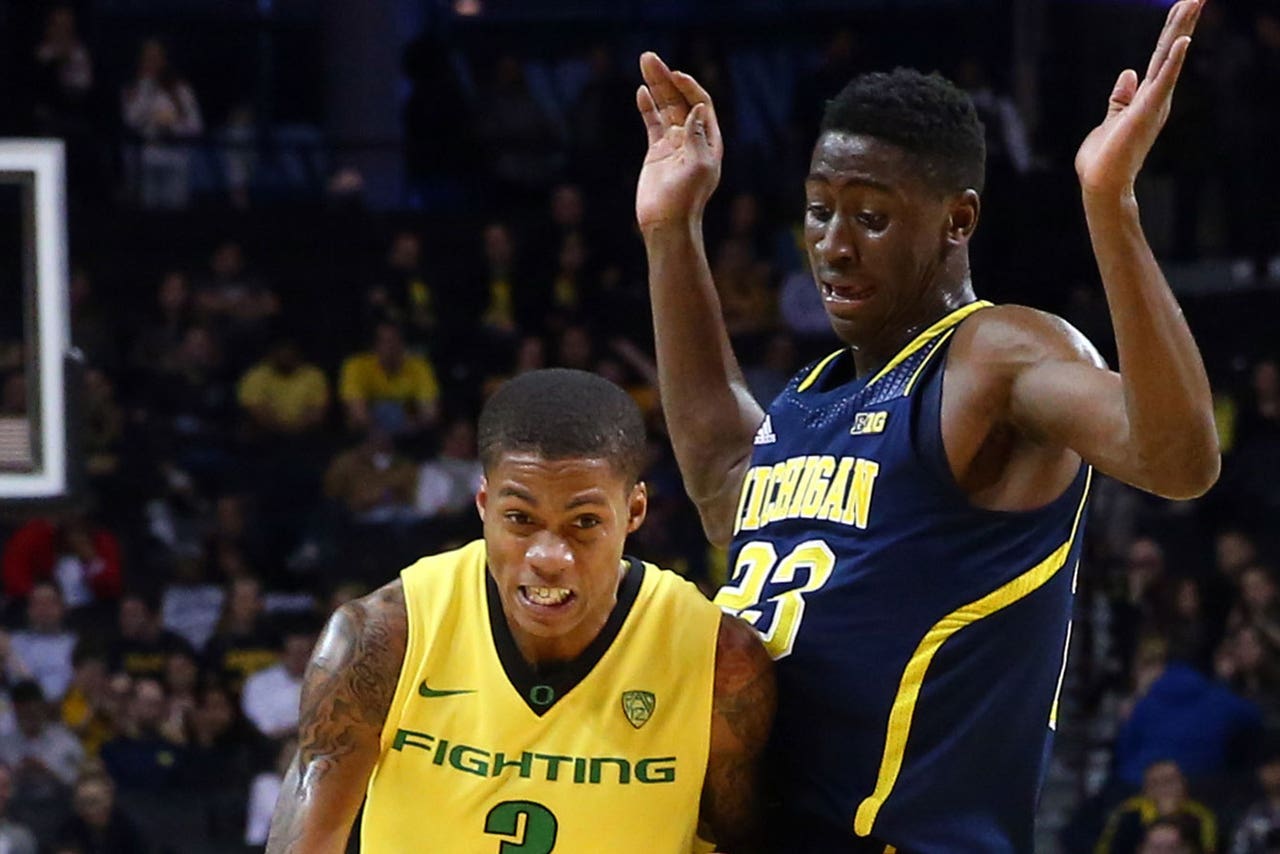 NEW YORK (AP) -- Ricky Doyle got an earful from a New York crowd.

But this was no Bronx cheer. Doyle's gritty effort grabbing boards and scoring bruising buckets inside earned him some applause and had the Michigan fans chanting the freshman forward's name as he walked off the court a winner.

"I never really experienced anything like that," Doyle said.

Up next, he can try do it again with a championship at stake.

Zak Irvin scored 19 points and Caris LeVert added 18 to lead No. 19 Michigan to a 70-63 win over Oregon on Monday night.

The Wolverines (4-0) used an 8-0 run midway through the second half to snap a tie game and give them just the separation they needed to advance to the Legends Classic final at the Barclays Center.

The Wolverines never trailed and made 23 of 29 free throws to hold off the Ducks. They'll play No. 12 Villanova in the championship game.

"They're really good at what they do," coach John Beilein said.

LeVert was good at what he did down the stretch, twisting his way down the lane for tough baskets and getting a rise out of the hundreds of fans in maize and blue who made the trip.

Joseph Young had 20 points for the Ducks (3-1). Ducks forward Dwayne Benjamin had eight points and 11 rebounds before leaving late in the game with an apparent left ankle injury. Coach Dana Altman said he did not know how bad the ankle was hurt.

Irvin, who hit three of Michigan's five 3s, swished one from the wing with 1:17 left for a 64-59 lead. Dillon Brooks' fifth foul sent Derrick Walton Jr. to the line. He made both his free throws to make it 66-61 and the Wolverines finally started to feel comfortable with the lead.

The Ducks sliced it to three but Doyle was clutch again, using a one-arm grab of an offensive rebound for a put back and a 68-63 lead.

Michigan fans erupted with chants of "Ricky Doyle!" Doyle was subbed out after Michigan sealed the win with two more free throws and left to a roaring standing ovation.

Doyle, a 6-foot-9, 245-pound freshman forward, scored 10 points a game after he was scoreless against Detroit.

"He played big for us," LeVert said.

LeVert made only three baskets for the Wolverines, but the sophomore guard did what was needed to get to the line. He made 11 of 13 free throws -- the Ducks were 12 of 18 overall -- and kept the lead down the stretch.

He crashed the paint for layup, landed on his rear and wagged his index finger for the and-1. LeVert got the call, and the free throw for a 61-57 lead.

The Ducks struggled to get Young open looks from the floor. Young, averaged 26 points over the first three games, made only five field goals. He missed seven of nine 3-pointers.

Brooks scored 14 points and Elgin Cook had 13. Young was held in a check after he scored 32, 22 and 24 points in the first three games.

"The guys played hard, we just didn't play very smart," Altman said. "That's my fault. We didn't run the offense the way we should have. We gave up a lot of easy baskets."

Toss out a woeful 3-point shooting performance, and Michigan was 10 of 16 from the floor in the half to lead 33-27.

Michigan: The Wolverines have not played Legends Classic finalist Villanova since second round of the 1985 NCAA tournament. ... Michigan will play five games in a 10-day stretch. ... The Wolverines had only three steals averaging 7.0 the first three games.

Oregon: Led by Benjamin's 11 boards, Oregon outrebounded Michigan 41-29. "That's one of the few times you'll give up 18 offensive rebounds and still get a W," Beilein said. ... The Ducks missed eight of 11 3s in the first half and never led the game. They tied twice.

Michigan advances to the Legends Classic championship Tuesday night against No. 12 Villanova. The Wildcats beat No. 14 VCU 77-53 in the opener.

The Wolverines played 11 players. "There is no certainty yet, and I don't know if there ever will be, what the rotation is," Beilein said. "Hopefully we will by the time we get to Big Ten play."