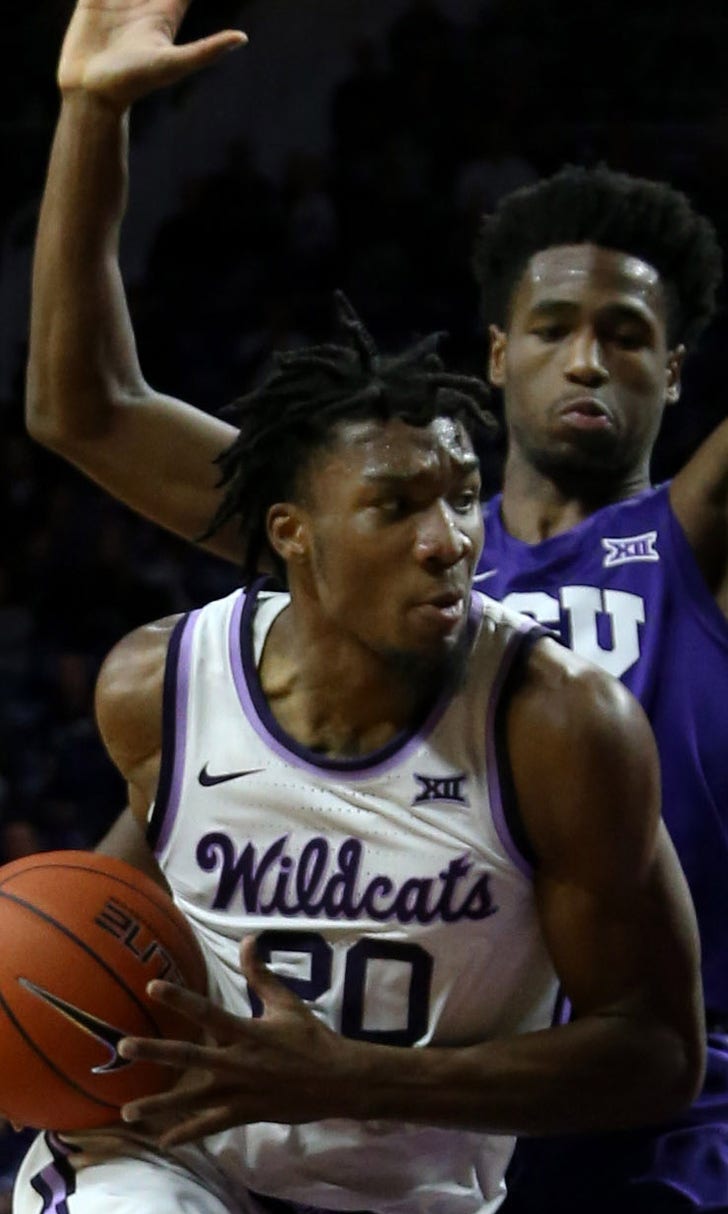 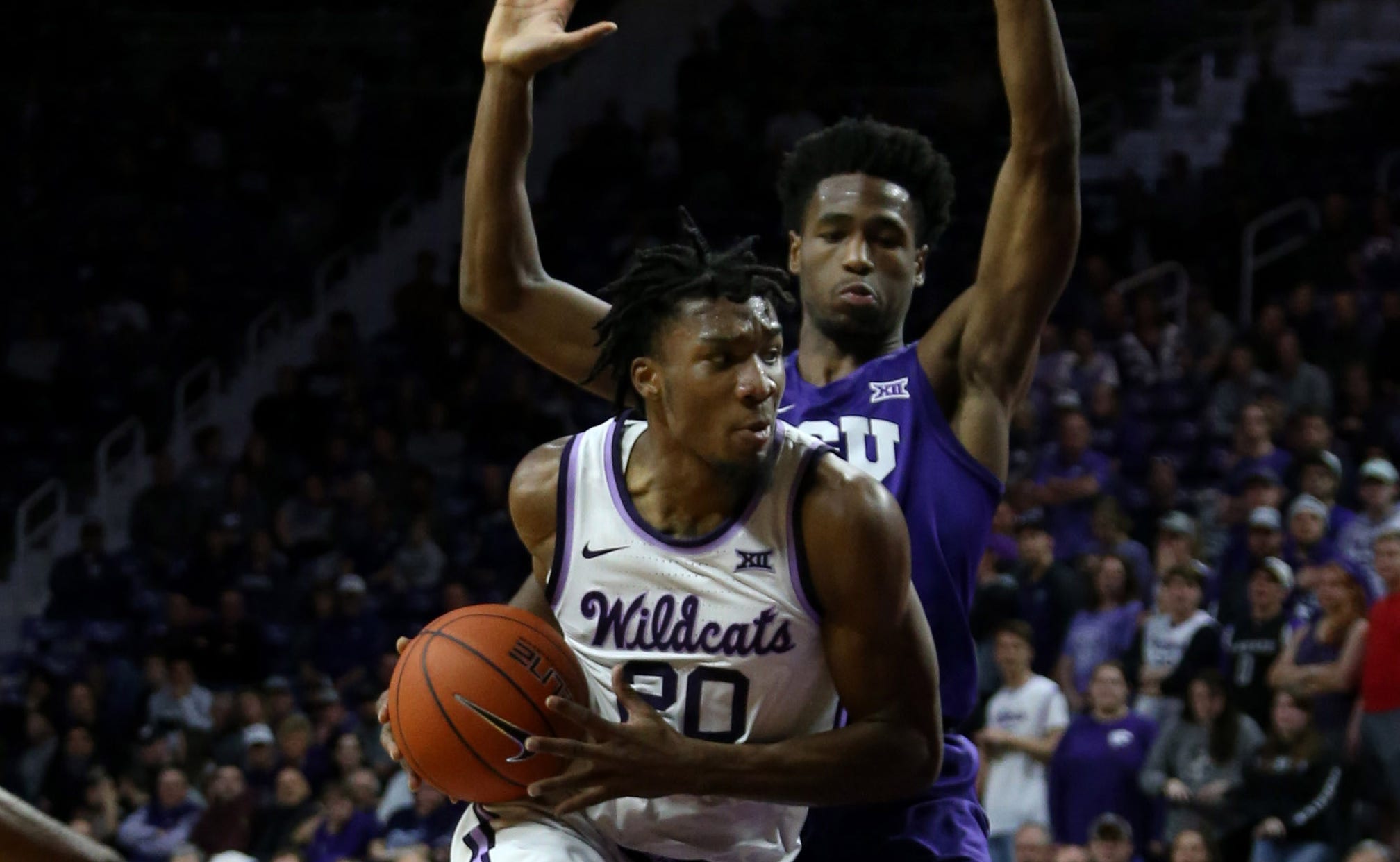 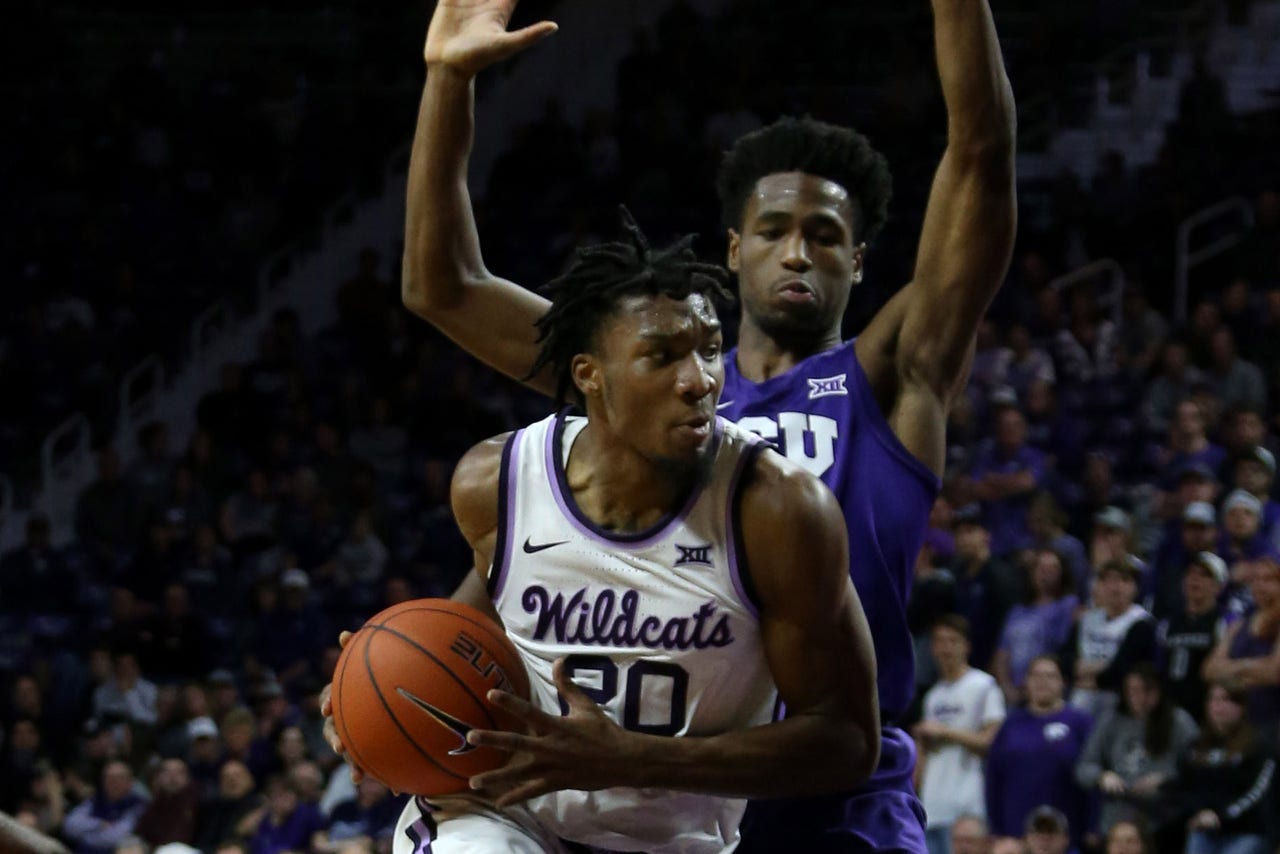 MANHATTAN, Kan. — Kevin Samuel and TCU had been bludgeoning Kansas State on the offensive glass all night.

Made perfect sense that's where the Horned Frogs would ultimately beat the Wildcats.

Their bruising sophomore center deftly tipped in RJ Nembhard's errant floater with 1.7 seconds remaining Tuesday night, moments after the Wildcats had hit a 3-pointer at the other end to tie the game, and that allowed the Horned Frogs to escape from a stunned Bramlage Coliseum with an ugly 59-57 victory.

“Big thing for us — and it's always been — offensive rebounding is a big part of everywhere I've been,” said TCU coach Jamie Dixon, whose team pulled down a whopping 15 offensive rebounds. “I mean, Kevin was terrific and has been. Defensively, he does so many things for us and 15 rebounds says a lot."

The last one was the biggest one. It came after the Wildcats had tied the game on David Sloan's 3-pointer with 13 seconds left, and Nembhard had driven left on Mike McGuirl and hoisted up his shot. Samuel's tip-in found the bottom of the net with so little time left that all Sloan could do was throw up a heavily guarded, off-balance 3 at the buzzer.

“That's what Samuel does. He's a monster,” TCU's Desmond Bane said. “I tell him that every day. He's gotten a lot better since last year, his motor is a lot better, is tough. Around the rim is a lot better. These are the types of games he's going to have throughout the season.”

Samuel finished with 10 points to go with the 15 boards and lead four players in double-figures scoring, helping the Horned Frogs (11-3) start 2-0 in the Big 12 for the first time since joining the league. Bane contributed 16 points, Nembhard added 15 and Jaire Grayer finished with 10 in a total team effort.

“We need to get where we're getting consistent production out of guys every game and so far that hasn't happened,” Kansas State coach Bruce Weber said. “It's typical of our season that we've had to deal with one thing after another.”

The Horned Frogs allowed Kansas State to hang around as long as they were clanking 3-pointers.

That started to change late in the first half.

Nembhard's deep shot from the wing broke a 23-all tie, then the Wildcats came up empty on their next two possessions, and Bane and Edric Dennis Jr. added back-to-back 3s that helped TCU take its largest lead of the game.

Makol Mawien scored just before halftime for Kansas State, but he left enough time for the Horned Frogs to race up the floor. The ball got loose but wound up in the hands of Grayer, and his buzzer-beating 3 gave his team a 35-25 lead at the break.

The Horned Frogs started 1 of 10 from beyond the arc. They proceeded to hit eight of their next 12.

Another lull hit TCU midway through the second half, but the Wildcats struggled to take advantage of it. They trailed 40-29 when the Horned Frogs went more than six minutes without a field goal, but when Bane ended the drought with a 3-pointer with 10:45 to go, the visitors from Fort Worth still maintained a 44-40 advantage.

Kansas State kept up the defensive pressure, though, and Sneed took it upon himself to carry the Wildcats on the other end. He buried a 3-pointer from the wing to pull within 51-49 with 3:50 left, then was fouled driving to the basket moments later and made the second of two free throws to make it 53-50 after the final media timeout.

That set the stage for the frantic final couple of minutes.

“Coaches are on me for being on the court too much. Maybe I need to jump on it and get a technical (foul) to wake our guys up a little bit,” Weber said. “They made the big plays.”

TCU had lapses in poise that could be attributed in part to playing its first true road game — even though there may have been more empty seats than full ones. The Horned Frogs' only other games away from the Dallas metro this season came against Clemson and Wyoming in late November at the MGM Resorts Main Event in Las Vegas.

Kansas State has struggled to score all season, so it made was somewhat poetic that the Wildcats would lose another game on a missed shot at the buzzer. Six of their seven losses have been by single digits.