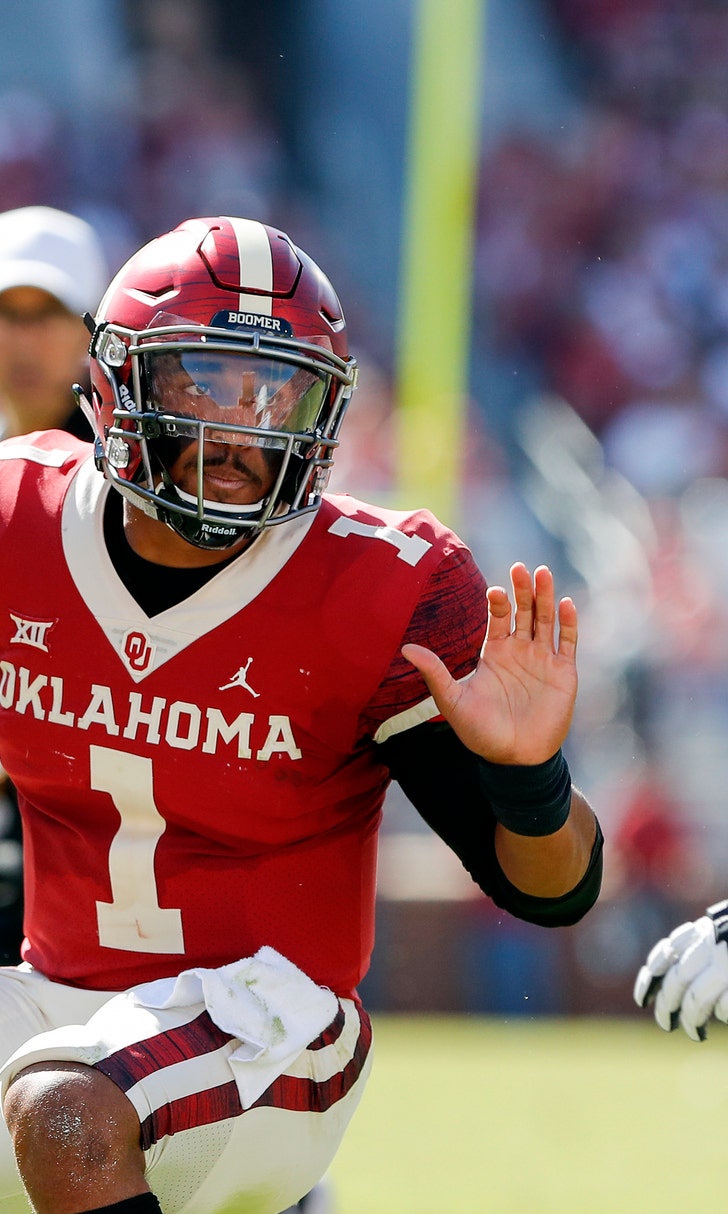 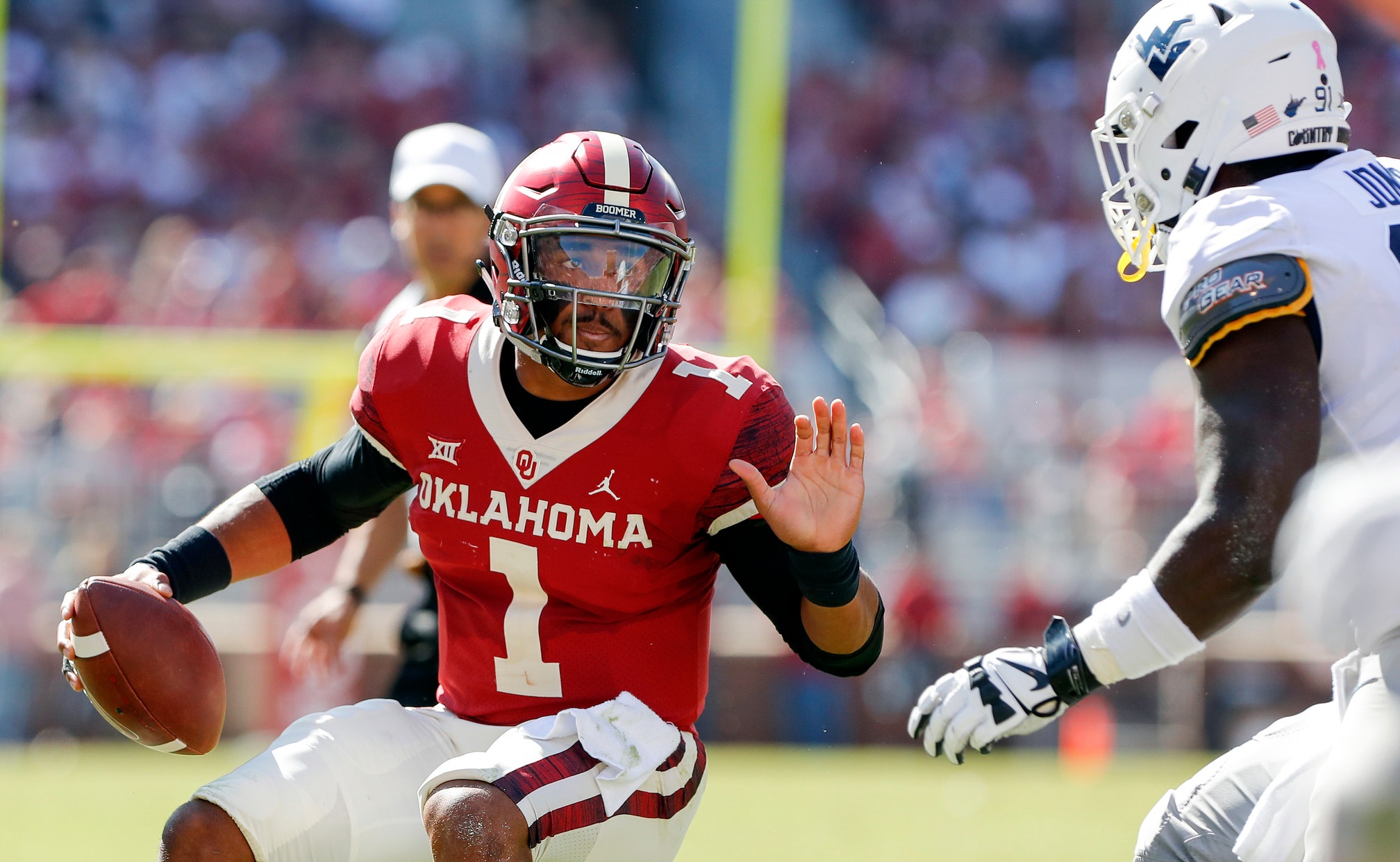 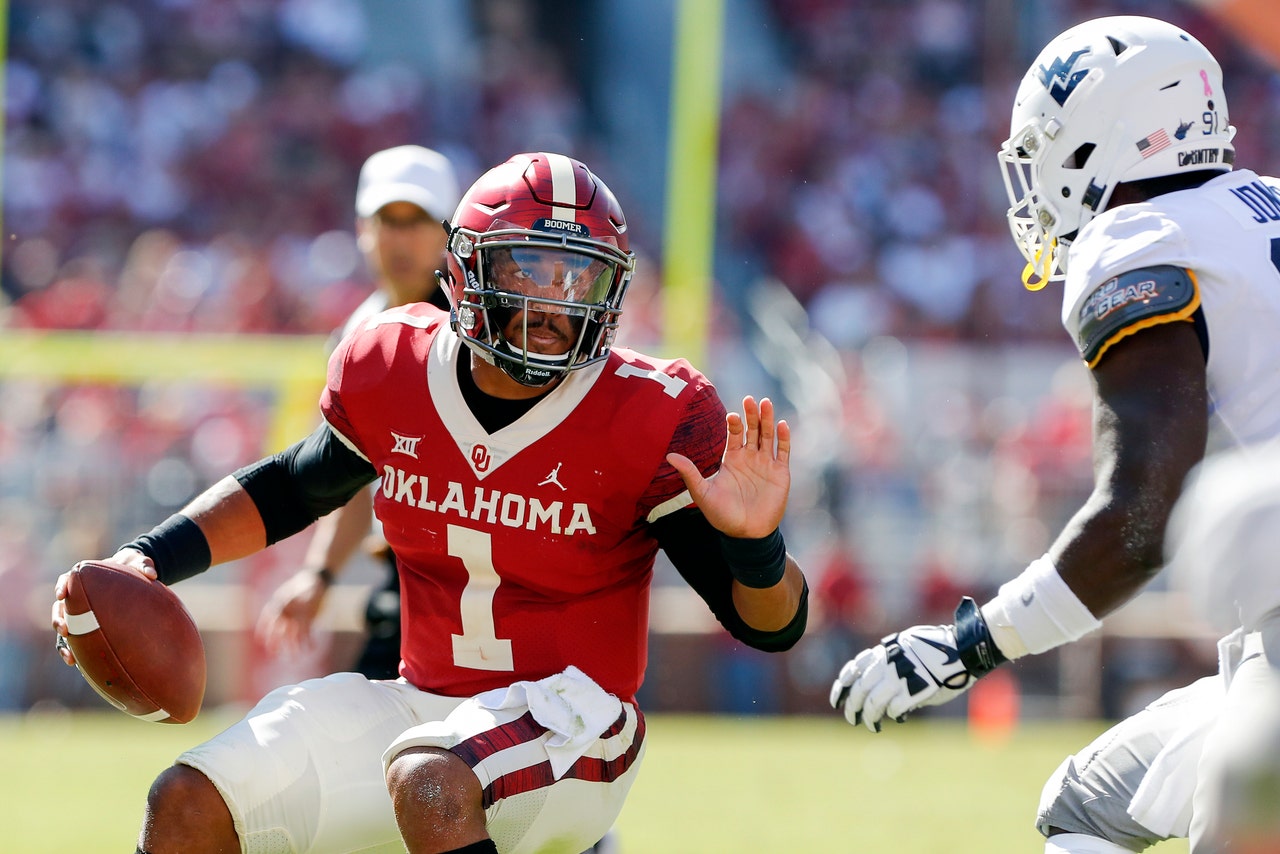 NORMAN, Okla. (AP) — After No. 5 Oklahoma downed rival Texas last week, coach Lincoln Riley said a true test for the Sooners would be how they bounced back from that emotional game to face West Virginia as the heavy favorite.

Riley was pleased with the results. Jalen Hurts passed for 316 yards and three touchdowns and rushed for 75 yards and two more scores and the Sooners cruised to a 52-14 victory over West Virginia on Saturday.

Oklahoma, which rolled up 562 yards of offense, has scored at least 34 points in 17 straight games, the second-longest such streak in the Football Bowl Subdivision since 1980. The Sooners didn't score a touchdown in the fourth quarter, though; they've scored a touchdown in every quarter but two this season.

"I think we're serious about being a good football team," Riley said. "We handled this week like a team that has some big goals in mind and understanding that it is a process. It's not about one game here or there. It's a constant climb for us."

West Virginia quarterback Austin Kendall, who spent three seasons at Oklahoma as a backup to Baker Mayfield and Kyler Murray before transferring, completed 15 of 31 passes for 182 yards, including touchdowns of 38 and 7 yards to T.J. Simmons.

"It was a good experience to come in and see the road I used to take to go to my house," Kendall said. "Good to see everybody I haven't seen in a couple of months. I got a lot of love for that team and all the guys I've played with; nothing changes there."

Hurts, whose transfer from Alabama to Oklahoma led to Kendall's transfer, completed 16 of 17 passes, with the incompletion a drop by freshman Drake Stoops.

He became the third Oklahoma quarterback to complete at least 90% of his passes, throw for more than 300 yards and throw for at least three touchdowns in a game. He also recorded a career-high passing efficiency rating of 308.5, the second-best mark in program history, behind Murray's 348 against Baylor last season.

"All of that is always a challenge — us challenging ourselves to play to our standard and I say it all the time, to play our brand of football," Hurts said. "If we can focus on the things that we can control, the only way is up. We've just got to try to take positive steps, learn from our mistakes and move forward with the right intent."

Oklahoma punted on its first possession but scored touchdowns on its next four — a 20-yard pass to Jeremiah Hall, a 6-yard pass to Charleston Rambo, a 9-yard run by Kennedy Brooks and a 2-yard run by Hurts.

The Mountaineers were within 28-14 at halftime, but Oklahoma scored three touchdowns in the third quarter, the first on a 22-yard run by Hurts and the second on a 46-yard pass to Lee Morris. Brayden Willis then blocked a punt in the end zone that Oklahoma's Austin Stogner recovered to extend the Sooners' lead to 49-14. It was the first time that happened to West Virginia since 2003 season.

Oklahoma: The Sooners' offense continued to roll behind Hurts and the defense mostly held its own, holding the Mountaineers to 51 rushing yards and 242 yards of offense. Those are two things Oklahoma will need to continue to happen to stay in the mix for a spot in the College Football Playoff.

After Oklahoma's fourth touchdown, the horse-drawn Sooner Schooner came onto Owen Field to celebrate, but it fell over while making a turn, spilling people and debris onto the field.

The horses kept running but quickly were corralled and there were no major injuries to human or horse, even though the riders were thrown from the Schooner. Security officials quickly cleared the debris and play resumed without delay. After Oklahoma's fifth touchdown, a cheerleader ran onto the field waving a giant "OU" flag in lieu of the Schooner.

Oklahoma had its fourth consecutive 11 a.m. kickoff on Saturday and is scheduled for another next week at Kansas State. That didn't sit well with a segment of Oklahoma fans, which athletic director Joe Castiglione acknowledged in tweets sent before the game.

"Appreciate our fans adjusting for another 11 a.m. game. Although it's not always readily apparent, we vigorously push for other times, like we did for our opener," Castiglione tweeted. "Obviously, the national TV exposure is important but we also fully understand the impact on you. We will continue to explore ways to better serve you. Go #Sooners."

Former Oklahoma running back Steve Owens, the 1969 Heisman Trophy winner, was recognized during a halftime ceremony. Owens, who is from Miami, Oklahoma, received a 50th anniversary plaque. He is one of Oklahoma's seven Heisman winners.

Oklahoma maintained its perfect record, but whether that allows the Sooners to hold their position in the AP Top 25, or move up, has largely depended this season on what happens elsewhere.

West Virginia: After an off week, will visit Baylor on Oct. 31.