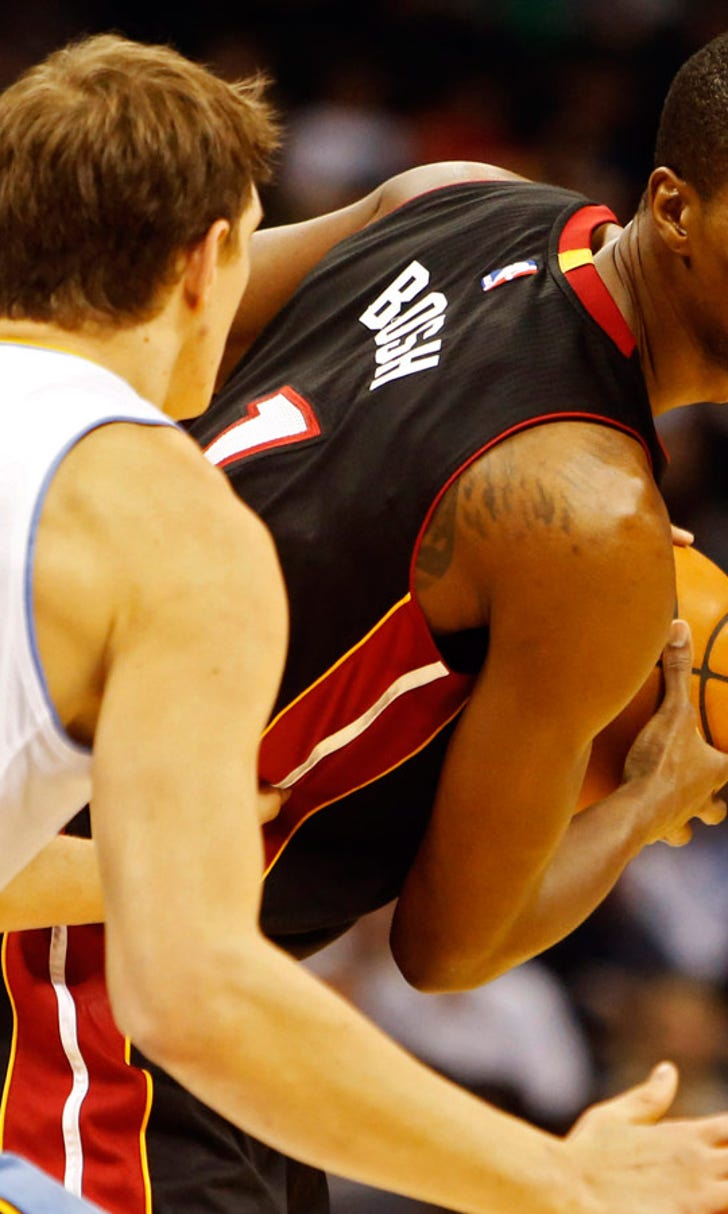 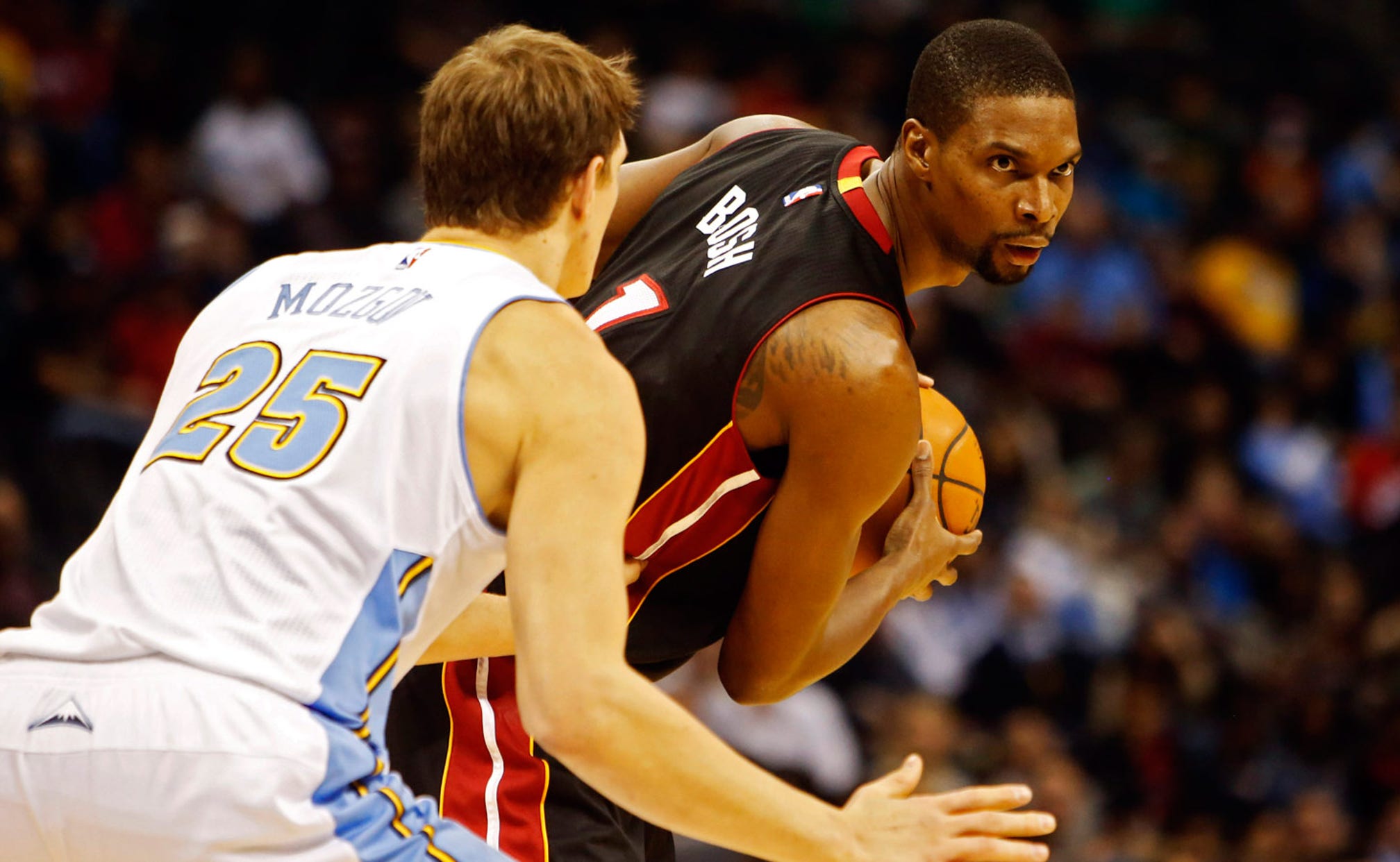 Heat go cold from field in tough loss to Nuggets 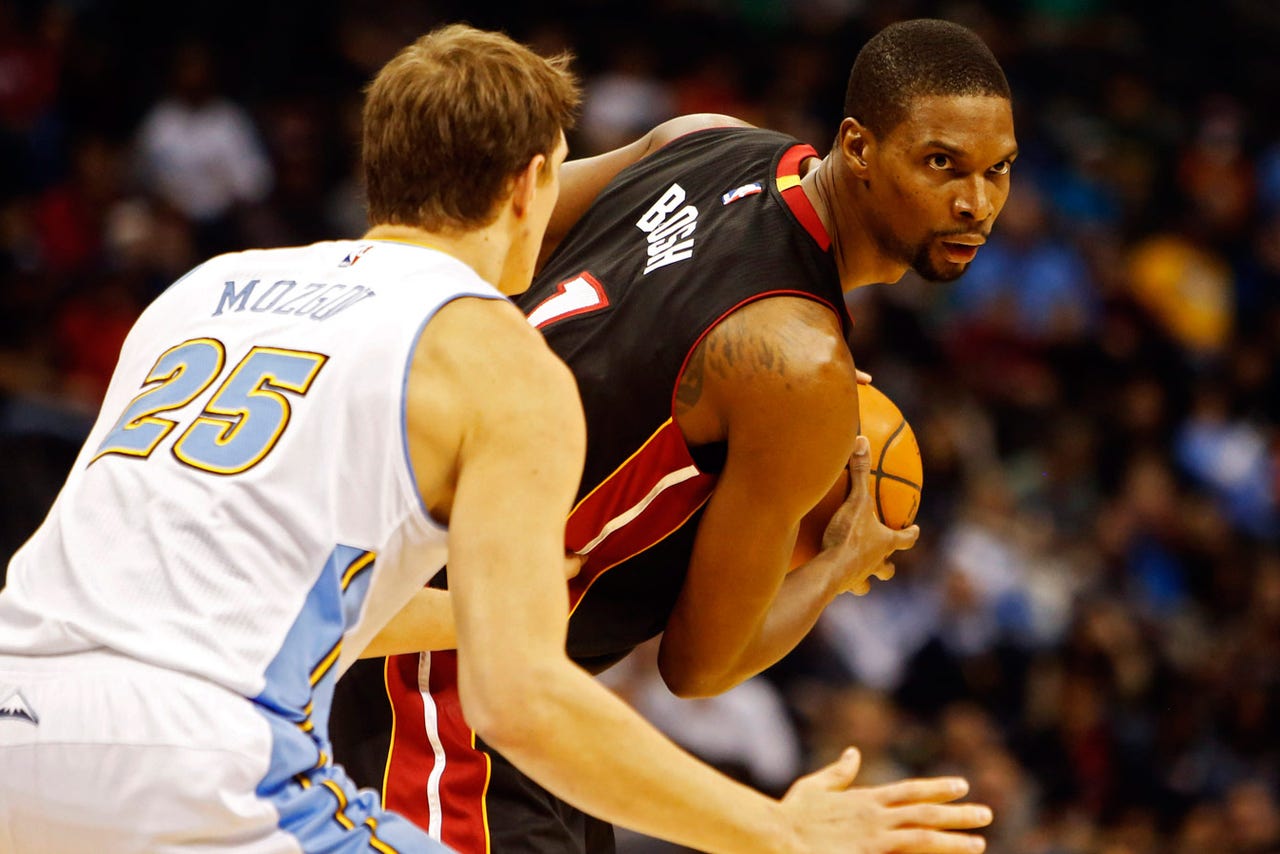 DENVER (AP) -- The Denver Nuggets needed a lift before embarking on a tough stretch of games. The road-weary Miami Heat gave them the break they needed.

Wilson Chandler scored 17 points, Arron Afflalo had 16 and the Nuggets beat the Heat 102-82 on Wednesday night to snap a four-game losing streak.

Chris Bosh had 14 points to lead Miami, which has dropped four of its last five on the road after starting the season 5-2 away from home. The Heat are in the middle of a stretch of eight of 10 games on the road.

Wednesday posed a difficult challenge for the four-time Eastern Conference champions. The Heat won in Phoenix on Tuesday but faced the daunting task of playing the Nuggets at the high altitude.

"This is the worst back-to-back in the league," guard Dwyane Wade said. "You come in to see what you can do. You try to come out and compete. We did that for a half and then it got away from us in the third quarter. It was one of those games."

Denver has been streaky in the first quarter of the season. The Nuggets lost six straight, won five in a row to go above .500, but followed that with the four-game slide.

It won't be easy to keep winning. In a span of seven days the Nuggets play Houston twice, defending champion San Antonio and the streaking Los Angeles Clippers.

"It felt good to finally get this win, get the monkey off our back and head into these next games," guard Ty Lawson said.

The Nuggets led by 12 early but the Heat rallied to tie it at 48 at halftime. Shawne Williams hit three 3-pointers in the second quarter and Luol Deng nailed a short jumper at the halftime buzzer to tie the score.

Denver started pulling away in the third. Chandler and Afflalo scored four quick points apiece to start the second half. A steal by Lawson and dunk by J.J. Hickson gave the Nuggets a 59-50 lead.

"Last night's game finally caught up with them as we picked up the pressure," Nuggets coach Brian Shaw said. "They're an older team and it's harder to bounce back on the second night of a back-to-back. I thought we took advantage of that."

Timofey Mozgov, who had nine points and 10 rebounds, had a three-point play and rookie Erick Green hit a jumper to give Denver a 76-60 lead late in the third.

After two free throws by Mario Chalmers with 4.4 seconds remaining in the third, Green nailed a 3-pointer at the buzzer to make it 79-62 heading into the fourth.

"By the end of the third quarter it just started to get too far into the double digits," Miami coach Erik Spoelstra said. "We just didn't have enough juice. Whether it's because of (Tuesday) night or the competition or whatever, we didn't have enough."

The Nuggets opened the final period on a 14-4 run to put it away.

Lawson played just under 43 minutes the previous four games but logged just 30 in the win over Miami. He sat the entire fourth quarter while the Nuggets built a 27-point lead.

"It's like a day off," Lawson said. "I've been playing 48 minutes, something like that, so it feels good to get my legs back and have a chance to rest."

Wade has been consistently scoring in double digits but nearly had that streak snapped at 12 Wednesday. Wade was held to eight points until late in the fourth quarter. His running bank shot midway through the final period gave him 10 points and he left the game seconds later.

"They switched a lot of stuff," Wade said. "There was no space on the floor. We just really didn't get any good looks."

Heat: The Heat played without F Josh McRoberts. He suffered a bruise on his right knee late in Miami's win in Phoenix on Tuesday night. ... Miami is 9-0 when leading after three quarters and 6-2 when scoring 100 or more points. ... The Heat have hit at least one 3-pointer in 213 straight games.

Nuggets: F Kenneth Faried returned to the lineup after missing two games with a back injury. ... F Danilo Gallinari missed the game with a couple of bone bruises to his right knee. Denver coach Brian Shaw played Gallinari just 5:36 in Monday's overtime loss in Toronto but said the lack of playing time was due to how well Wilson Chandler was playing. ... The Nuggets were also without G Nate Robinson (back) and C JaVale McGee (left tibia soreness). Robinson has now missed three straight games and McGee eight of the last nine.

Heat: At Utah on Friday.

Nuggets: At Houston on Saturday.