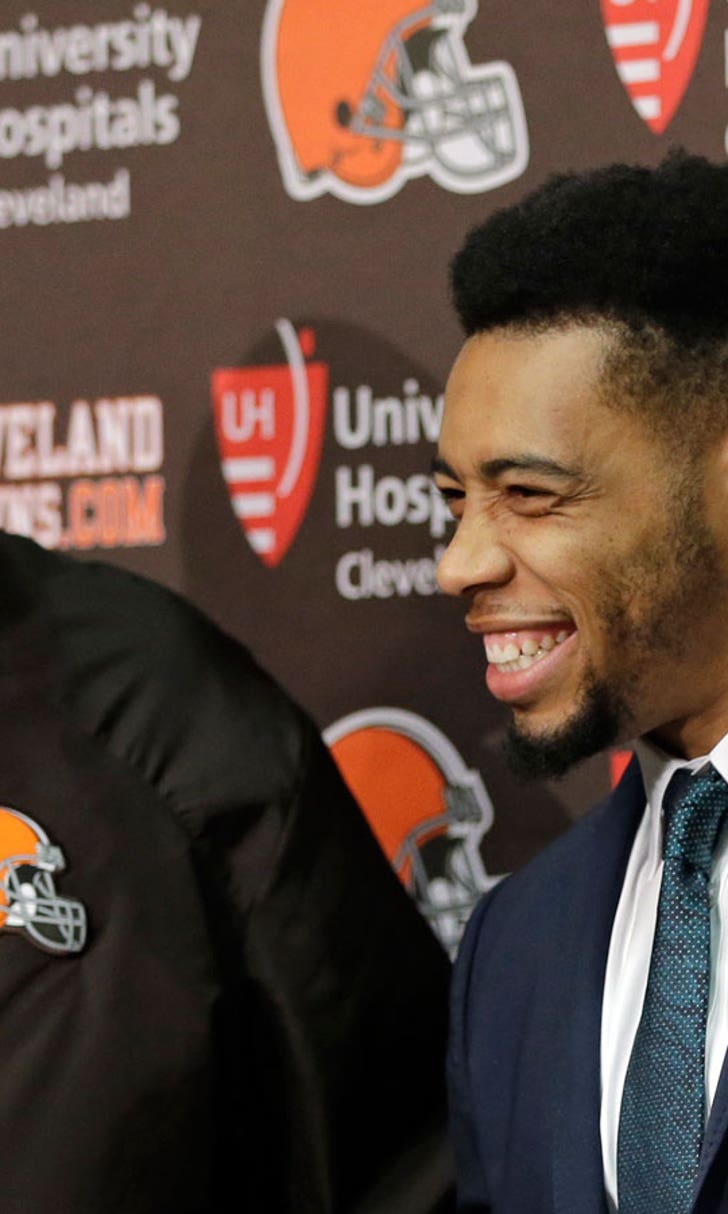 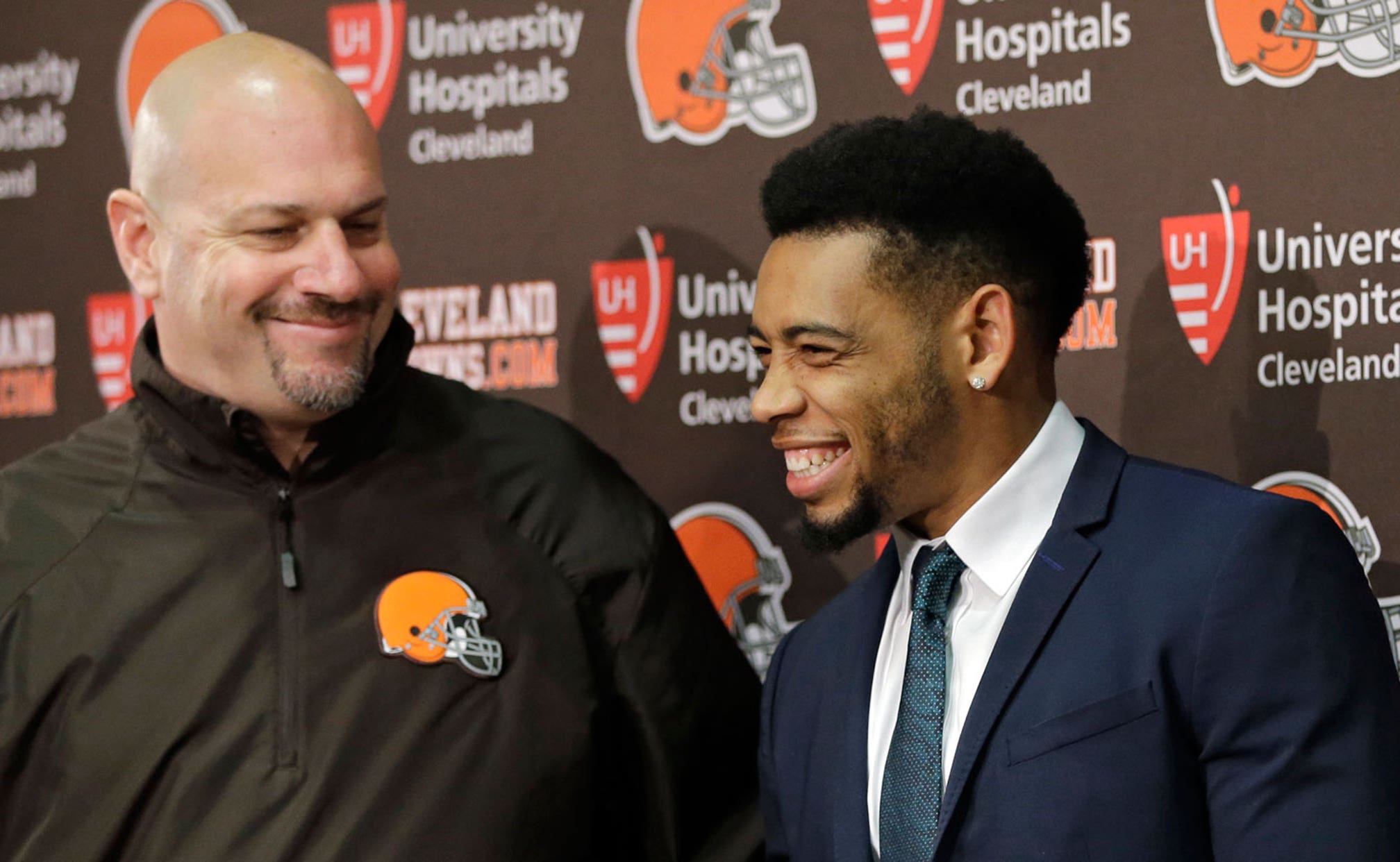 Haden 'hyped' to have Johnny Football as teammate 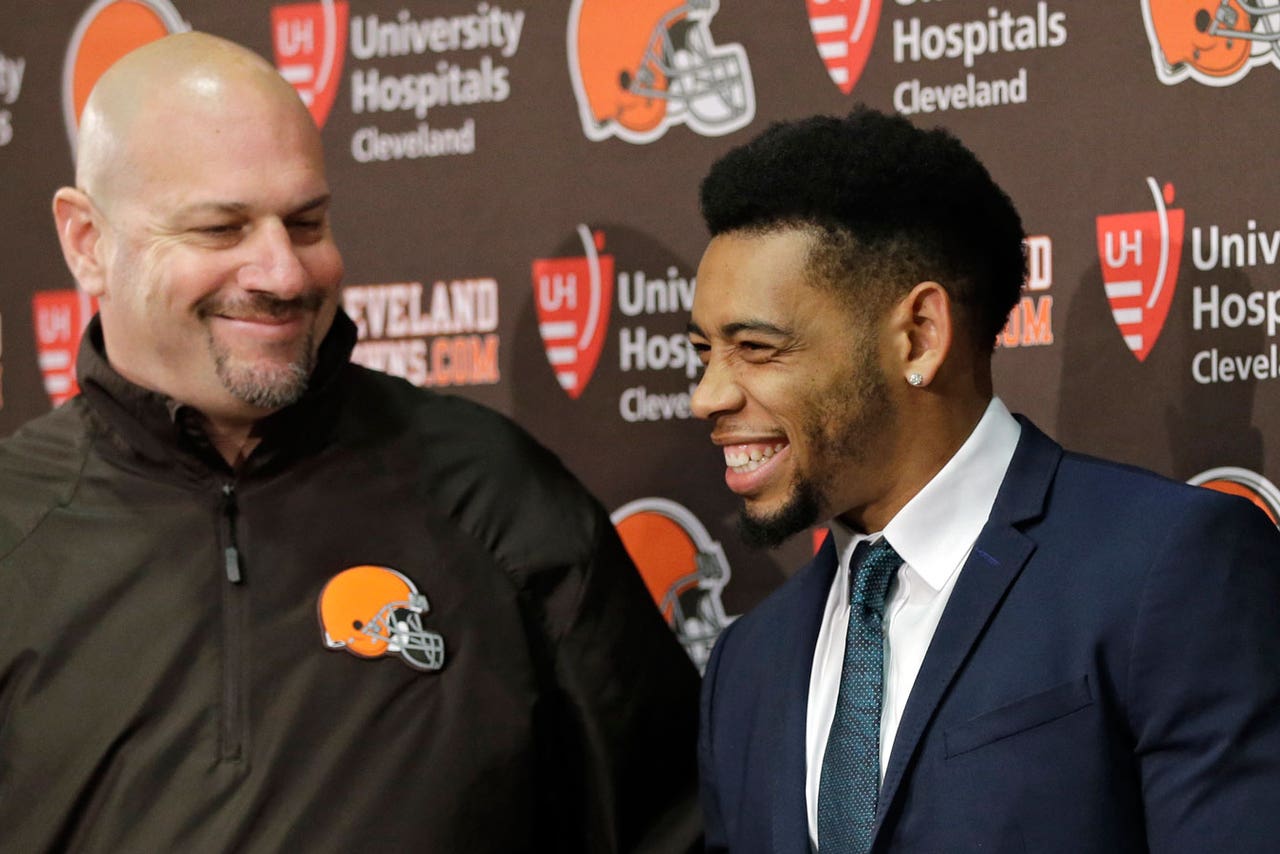 BEREA, Ohio--The Browns announced Tuesday that they have signed Joe Haden to a five-year contract extension.

On Wednesday, Haden talked about what it means to him.

"It's great, it's crazy, it's an unbelievable experience," Haden said. "I had my wife there and my parents. I played ball my whole life and when you get your rookie contract it's from what you did in college.

"When you get that second contract, it's for what you did since you been in the league," he said. "It lets me know they believe in me. It just makes me want to play more in the NFL."

Haden was asked if he was going to buy a new car or three.

"I've got my eyes on new shoes first," Haden said with a big smile.

Haden is known to be a big collector of cars, as well as shoes.

Haden, 25, was the seventh player overall selected in the 2010 NFL Draft and he has experienced ups and downs. He didn't start until the eighth game of his rookie season and in 2012, he was suspended for the four games of the season by the NFL for testing positive for the performance enhancing substance believed to be Adderall.

"It's been a long ride with some bumps in the road, but it's coming together," Haden said. "I'm super, super, blessed. I got married and that calmed me down. I got in the Bible more and I think it's been a lot more about football.

"Some of the outside distractions when you first come in and are making a lot of money, you can lose sight," he said. "I have my priorities in order and that really helps out."

The Browns have not won more than five games in any of Haden's previous four seasons, but he said staying with the Browns was a priority. Other than the $68 million reasons to stay, Haden said he really wants to see things turn around for the Browns and be a part of it.

"I really like Cleveland," he said. "The fans are great. I never wanted to bail out on the fans. The fan base is a big reason because the way they feel about the Browns. When we start winning here, there is no other place I want to play. If we can turn the organization around, it will be the best."

The contract extension puts him at the top of the cornerback list in terms of the financial side, but he said it will motivate him even more.

"I don't feel I've peaked at all," Haden said. "I think I can get so much better. This contract only makes me feel like I have to play like the best corner in the league. When I'm at practice, the DB's are going to see how hard I work."

Haden said despite going to his first Pro Bowl last season, he always had confidence in himself that he was going to be a top level NFL cornerback.

"I've been putting myself up there since day one," he said. "When you don't win as many games, you don't get the recognition. When you have the coaches behind you and your teammates and the organization behind you, that's all that matters. But, I've put myself there the whole time."

Haden said experiencing his first Pro Bowl only made him hungry for more.

Haden said he received advice from Hall of Fame cornerback Deion Sanders and is going to his camp with fellow top cornerbacks such as Richard Sherman and Patrick Peterson this summer.

"Deion has watched my game and things I need to work on," he said. "I'm going out to Deion's camp and he's going to help us out a bit."

Haden likes the direction the Browns are headed.

"I really like my coach, I really like coach Pettine," Haden said. "I've been here with a lot of coaches, but they're trying to change it all up. You can feel the difference in what we're doing. I like the defense.

Pettine said Haden is the type of player the Browns want to build the team around.

The Browns hope to pair Haden with recently drafted Justin Gilbert (eighth overall) from Oklahoma State. If the Browns can sign Gilbert to the customary five-year rookie contract for first-round players, they will have the duo both under contract for the next five years.

"Defense is obviously, something we're going to pride ourselves and it's going to be a cornerstone moving forward," Pettine said. "We feel we took a huge step in securing that by having Joe Haden long term. The defensive coaches were all fired up after being around and watching his tape.

"Joe's passion for the game and the importance of being a Brown," he said. "We put (signing Haden) on the to do list early on. He loves being in Cleveland being a Brown and we are thrilled we are able to get it crossed off (the list)."

Haden truly believes the Browns are close to breaking through.

"We definitely have a lot of positive momentum going on," he said. "With me being locked up, Alex Mack, Donte Whitner, Karlos Dansby. There's a lot of positive things going on and with Johnny (Manziel) and the rookies coming in, it's all positive.

Haden said he's excited to get on the field with Gilbert and see what he can do.

"He's a really, really talented player," Haden said. "When I was at the combine, I got to watch him. He turns the ball and is able to turn the ball over to the offense. I'm really glad we got him. I think he's going to learn and be a big part in helping the team."

Haden also weighed in on adding Manziel to the Browns. He was asked what his thoughts were when the Browns drafted him.

"I was hyped," he said. "I was hyped. I liked Manziel. You know me I'm a little bit on the flashy side. I like that about him that he has a personality."

Haden knows there will be more attention on the Browns, but that's fine with him.

"We'll get more attention," he said. "It doesn't matter. If we start wining we'll have that regardless.

"We welcome all of that," he said. "...Honestly, I have faith in (Brian) Hoyer and if you have Manziel he brings that noise. But when we get on the field, we'll be able to see who's better. If Manziel is better, he'll play."

Haden said he expects Manziel to be judged by what he does on the field.

"I can't imagine what he's gong through with all that attention on him," Haden said. "At the end of the day, Manziel is going to be Manziel when he gets (on the field) and when you're on the field everyone is going to see what's going on and nobody is going to be given a free spot."