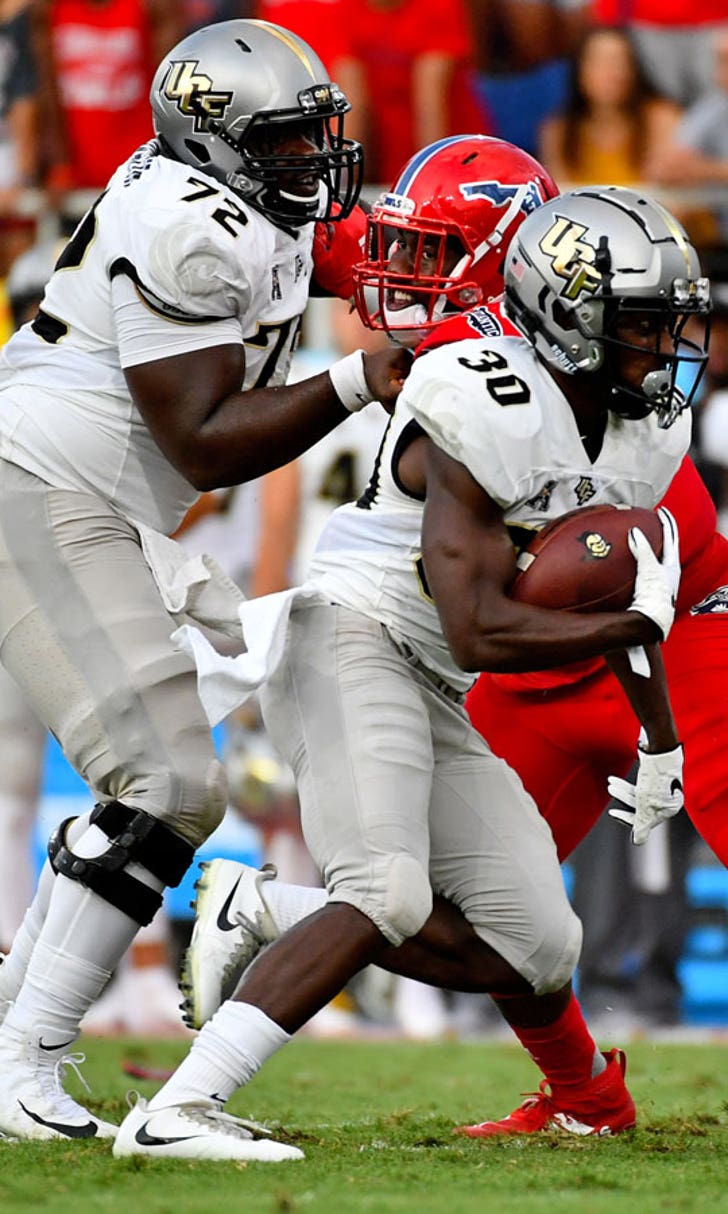 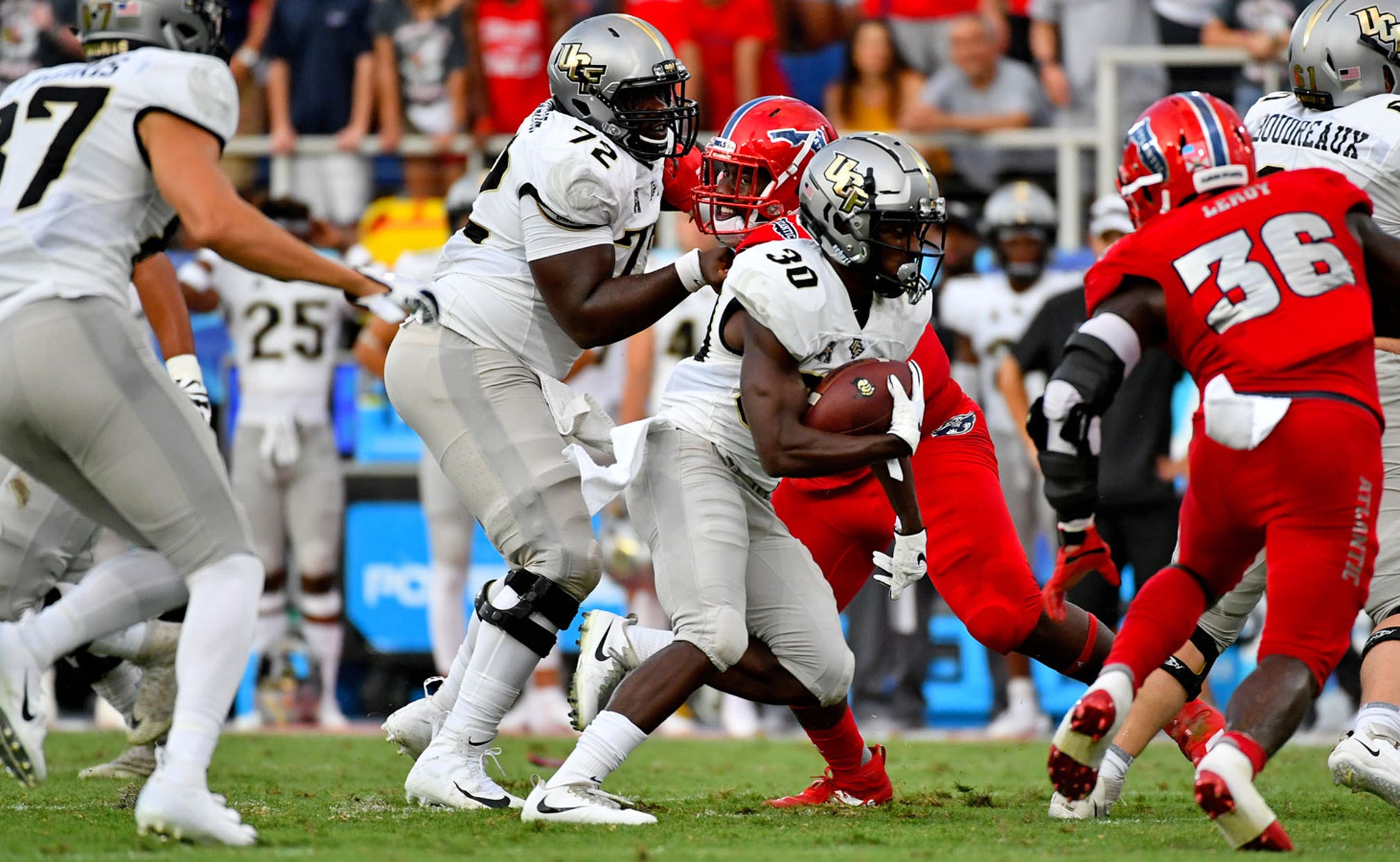 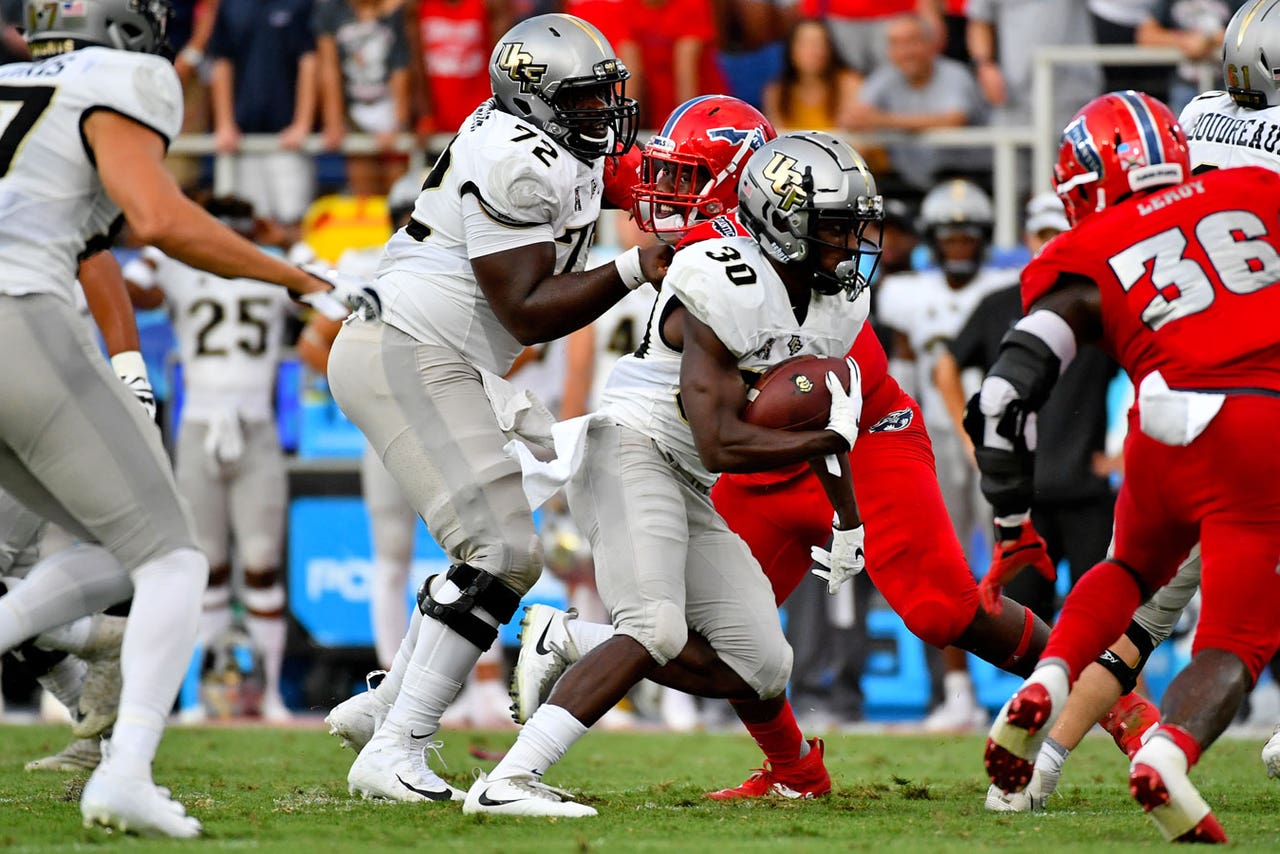 The freshman went 7 for 19 in his first start but had touchdown throws of 57 and 74 yards, and No. 18 UCF extended its regular-season winning streak to 24 games by easing past Florida Atlantic 48-14 Saturday night.

Gabriel also connected on passes of 45 and 32 yards, which more than made up for his frequent misfires. The left-hander totaled 245 yards passing — 35 per completion — and ran four times for 19 yards and a score.

"He did some things really well," coach Josh Heupel said. "Ultimately he made enough plays to give us some offensive balance."

Gabriel started after coming off the bench to throw three touchdown passes last week against Florida A&M. Notre Dame transfer Brandon Wimbush, who started the opener, was nursing an injury from that game and sat out.

"When my name's called, I'm going to be there — whatever the team needs," Gabriel said.

The Knights (2-0) totaled 574 yards and reached the 30-point mark for the 28th game in a row, the longest such streak since at least 1936. The only thing that stopped them was lightning in the area, which prompted the game to be called with 4:20 to play.

Florida Atlantic (0-2) disappointed a home crowd of 30,811, largest in the program's history.

"That's an embarrassing performance by us," coach Lane Kiffin said. "It was a big game for a lot of people here, so I apologize to our fans, I apologize to the people who got us here, from the president down."

UCF running back Adrian Killins Jr. scored one touchdown rushing and another receiving. Otis Anderson had the Knights' longest run when he juked past a safety for a 39-yard score.

UCF needed less than six minutes to take a 14-0 lead, and by halftime the margin was 28-6, even though Gabriel had completed just three passes.

"We've got a lot left out there," Heupel said. "We've got to be more consistent in the passing game."

Gabriel sealed the outcome midway through the third quarter with a completion to Killins, who was open by 10 yards at midfield and weaved past four defenders to the end zone for a 74-yard score.

"This offense is lethal and deadly, because we have so many different people at different positions who can do a lot of things," Killins said.

UCF sacked Chris Robison four times and stopped the Owls on third down 14 times. The Knights led 48-6 before allowing a touchdown for the first time this season.

Heupel said Wimbush could have played in an emergency. The coach declined to say which quarterback will start next week's game against Stanford.

The Knights gained 120 yards in the first 5½ minutes to take a 14-0 lead. They drove 75 yards in seven plays for their first score, and after a blocked punt, Gabriel hit Jacob Harris deep for a 57-yard touchdown.

After their 62-0 season-opening win last week, the Knights dropped one spot in the poll. That probably won't happen again.

UCF: The Knights weren't tested but remain on schedule for another banner season.

FAU: The Owls, playing a ranked team at home for the first time in the program's history, weren't ready for a breakthrough win.

UCF: The Knights have an opportunity to answer criticism about a perennially soft schedule when they play at home next Saturday against No. 23 Stanford.