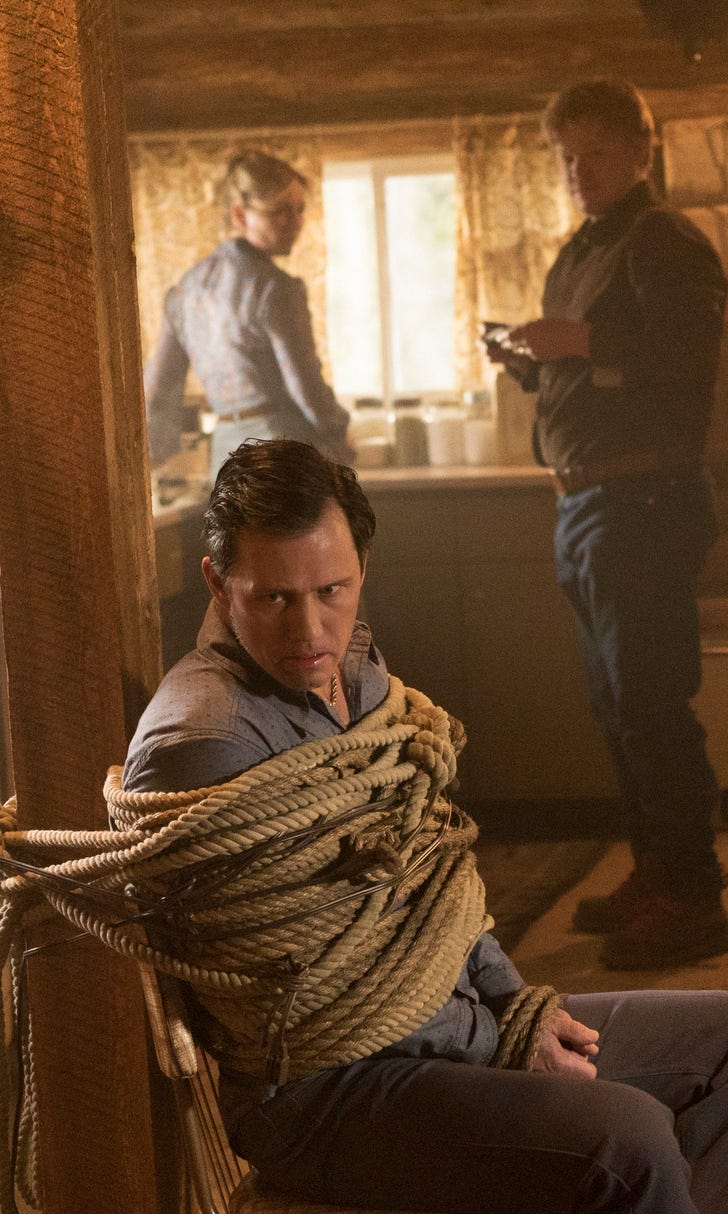 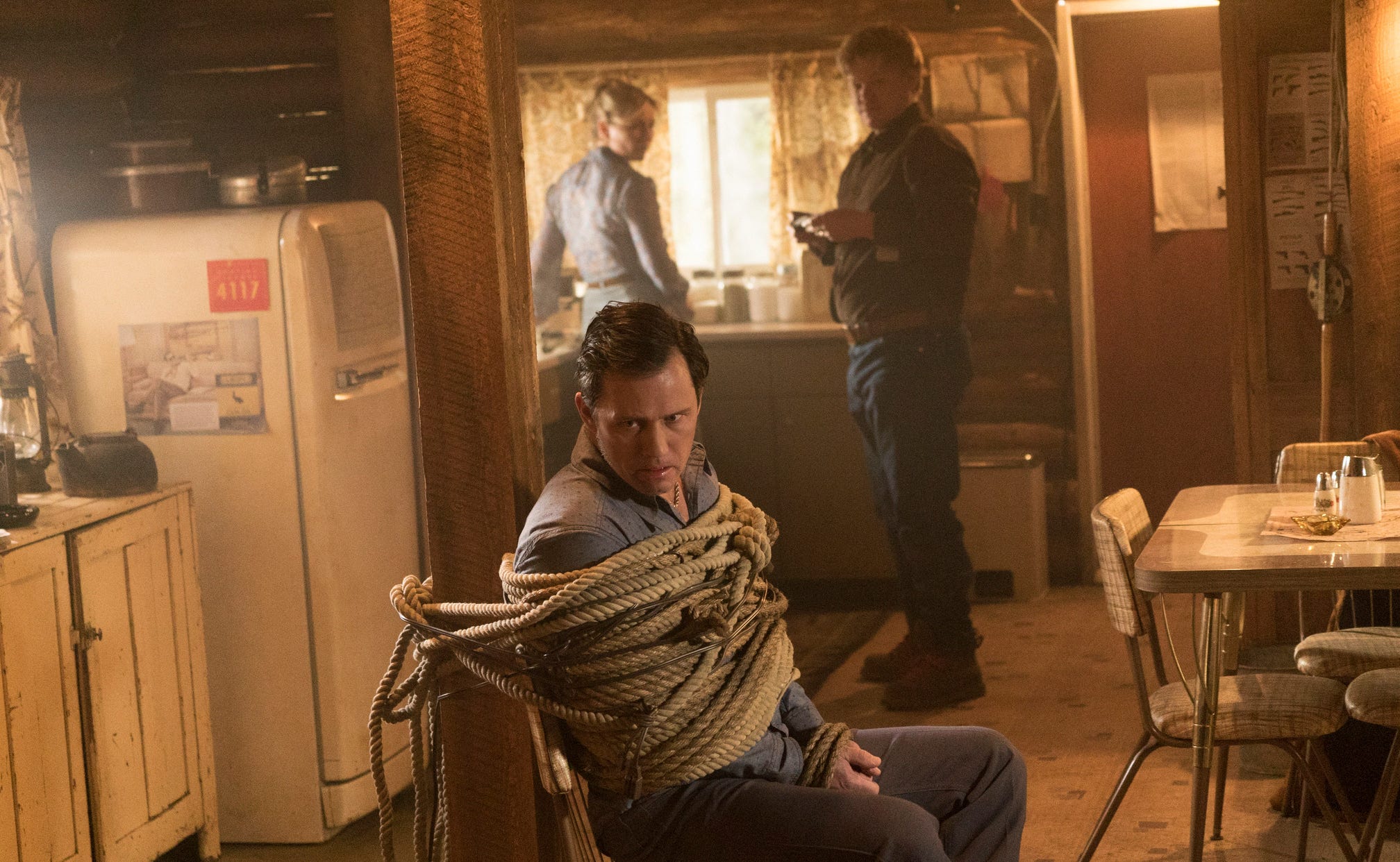 She's crazy. Keep her away from me. - Dodd Gerhardt

You know what? Homey ain't wrong.

Here's what we on earth term a fact: Episodes like "Loplop" are why we spend exorbitant amounts of money to permit pictures to illuminate our flat screens. This was about as perfect an hour of drama as any Fargo fan could imagine. It was veritably impossible to remove even one eye from the screen, because the tension and the level of "what's next" was so far off the charts, it was on a separate sheet of paper. Bob DeLaurentis wrote some tremendous stuff here, and all of it centered on Ed and Peggy Blumquist and their attempt to escape the hell a late night car accident has caused. Everything has changed in their lives, and both hidden strengths and weaknesses have been exposed in husband and wife, as well as within their marriage.

If you came here looking for negatives, it's hard for me to find one, because the pacing and the way in which Hawley and company allowed the plot to unfold was sublime. Everything that took place within the cabin made sense within the zany, bizarre universe of Fargo, and "Loplop" even featured a few hat tips to Joel and Ethan's original vision on the big screen.

First thing's first, kudos to Jeffrey Donovan, who has come so far in his career, and still has a long, fruitful path ahead of him. I admit to being a major Burn Notice honk, but Donovan has been good for a long time. If Dodd had to go out, he went out in a blazing showcase of camera time. I saw Anthony Cumia tweet out on Monday night that it was hard not to feel a tinge of sympathy for Dodd after watching all that happened to him after he first felt the sting of the cattle prod in the Blumquist basement.

Peggy is crazy, she's selfish, she's fickle, and, as Hank told her a few weeks ago, she's a little touched. Kirsten Dunst is playing the kind of role we've never seen from her before, because in some ways, it's even more out there than her breakout role in Interview with the Vampire. The Life Spring side of things is fascinating to watch, because it hasn't taken a backseat at any point through the proceedings. With the death and the cover up and the whole running for your life deal, she's still attempting to actualize. She wants to "be" and not just to think. It's patently preposterous, but again, within the Fargo construct, it's a beautiful thing.

Ed's life is ruined, as much as he continues to believe he can get back to the nuclear family dream and as much as he wants to be the breadwinner for a doting wife. He's now had to murder multiple people, just to stay alive. He's a fugitive. He's wanted by the Gerhardts. And, perhaps most of all, he has no clue what sleeps next to him. We actually know more about the wife than the husband does at this point. Attempting to decipher how Ed's story ends gives me a headache. I'd rather just sit back and let Noah tell me over the next two weeks. Jesse Plemons' face in the noose is one I'd rather attempt to forget, but the acting job leaves me with the exact opposite feeling. Landry-Todd-Dude in Black Mass-Ed...is quite great.

Sir, if I kiss you when we meet, would that be inappropriate? - Mike Milligan

This was also a massive opportunity for Zahn McClarnon, who took full advantage as the Hanzee Dent character rose to the next level. His Chigurh like movements, his ability to compartmentalize his own necessary violence, and his reaction to racism in Sioux Falls, all of it worked and advanced that side of the story. By the time he found the blue Lincoln in the woods, he wasn't fully a villain anymore. It was less surprising when he chose to put the final lead nail in Dodd's coffin, particularly after Gerhardt dropped a few derogatory nicknames. Then came the haircut, which was so out of place, it was actually exactly correct for that moment. It's incredible how even the strangest thing fits in this show.

But, the scene I'll never forget is Dodd's temporary escape and the entire hanging and knife in the foot and fireplace utensil sequence. Virtually none of it was easy to watch, but prior to Dodd freeing himself, we got a prime example of why Fargo seems to be in a class all its own. As Peggy watched the Reagan film, our view goes from the wavy television footage to a full screen, clear version of the movie. We become Peggy, lost in that story, which, even if the film is meaningful on its own, is the entire point. She forgot about the hostage. She became engrossed in the story. So did I. I'll bet you did as well. Why were we seeing it? Well, perhaps the biggest reason was to drop our guard. The rope on the ground was her mistake, but it felt like OUR mistake.

However, as we cut back to Peggy, the realization was IMMEDIATE that Dodd was going to be gone, far before the camera panned over to confirm that occurrence. Seriously, how good was that?

Maybe you've heard of me? The Butcher of Luverne. - Ed

I have heard of you, and may I say, brother, I like your style. - Mike

At times, the cabin scenes felt like Misery, at other times they reminded me of the ill-fated trip into the Pine Barrens for Paulie and Christopher on the Sopranos. After Hank and Lou arrived on scene, there could be no better closing shot than the drum cadence and the blank, terrified look on the face of Ed and Peggy Blumquist. Remember, these were fairly normal, small town folks, thrust in the middle of an unthinkably complex set of circumstances.

We've got two more episodes. Mike Milligan is set to retrieve Dodd Gerhardt in Sioux Falls, but has no clue just how difficult that undertaking might be. Ed and Peggy are caught, again, but don't really look like criminals. We have no idea whether Constance is alive, though we have our doubts, especially since she failed to get a specific address. Dodd Gerhardt took a bullet through the head, leaving Floyd and Bear even more shorthanded than they might think. The gang war has taken many casualties, and neither group may survive in the end.

Keith Gordon's direction was strong, and included more split screens than any other episode this season. The artistic ways in which they were included, wiped in, and removed, was excellent. It didn't distract and actually gave a sense of flare to the proceedings that wouldn't have existed otherwise. Keith and Bob crushed it with the visuals and the script.

Traditionally, the highest drama in a season, anthology or not, comes in the penultimate installment. The sadness or the uncertainty or the danger rise to a fever pitch, so there's something to overcome in the finale. Many deaths happen in the one before the one, rather than the one itself. The expectation is a climax - or at least a final ten minutes next week - that will have us all salivating for the conclusion.

What's most exciting, though, is in the legitimacy of this one question: How do Noah Hawley and his crew top this? I know they can. I know they probably will, but I found "Loplop" so entertaining and so well developed, it's hard to believe they can ascend to a higher plane.

My guess is they'll actualize it.

Erstwhile on Twitter, I existed as @GuyNamedJason. I still do. Also, I'm thinking of a haircut.