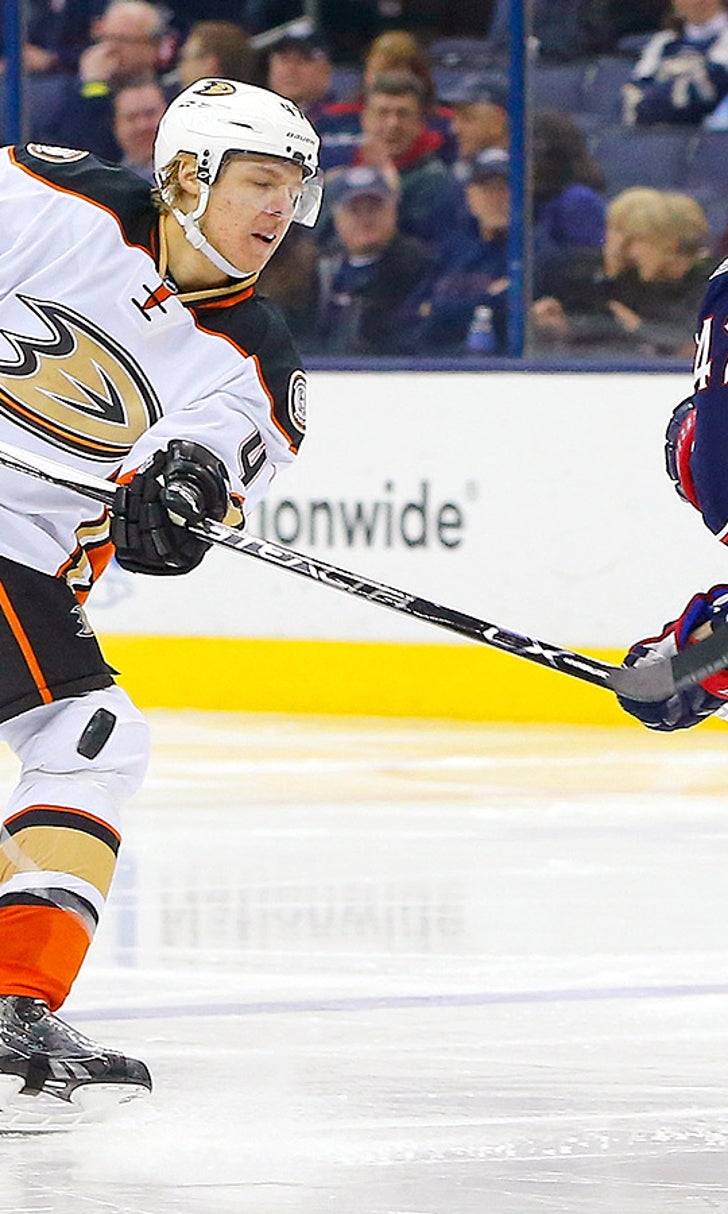 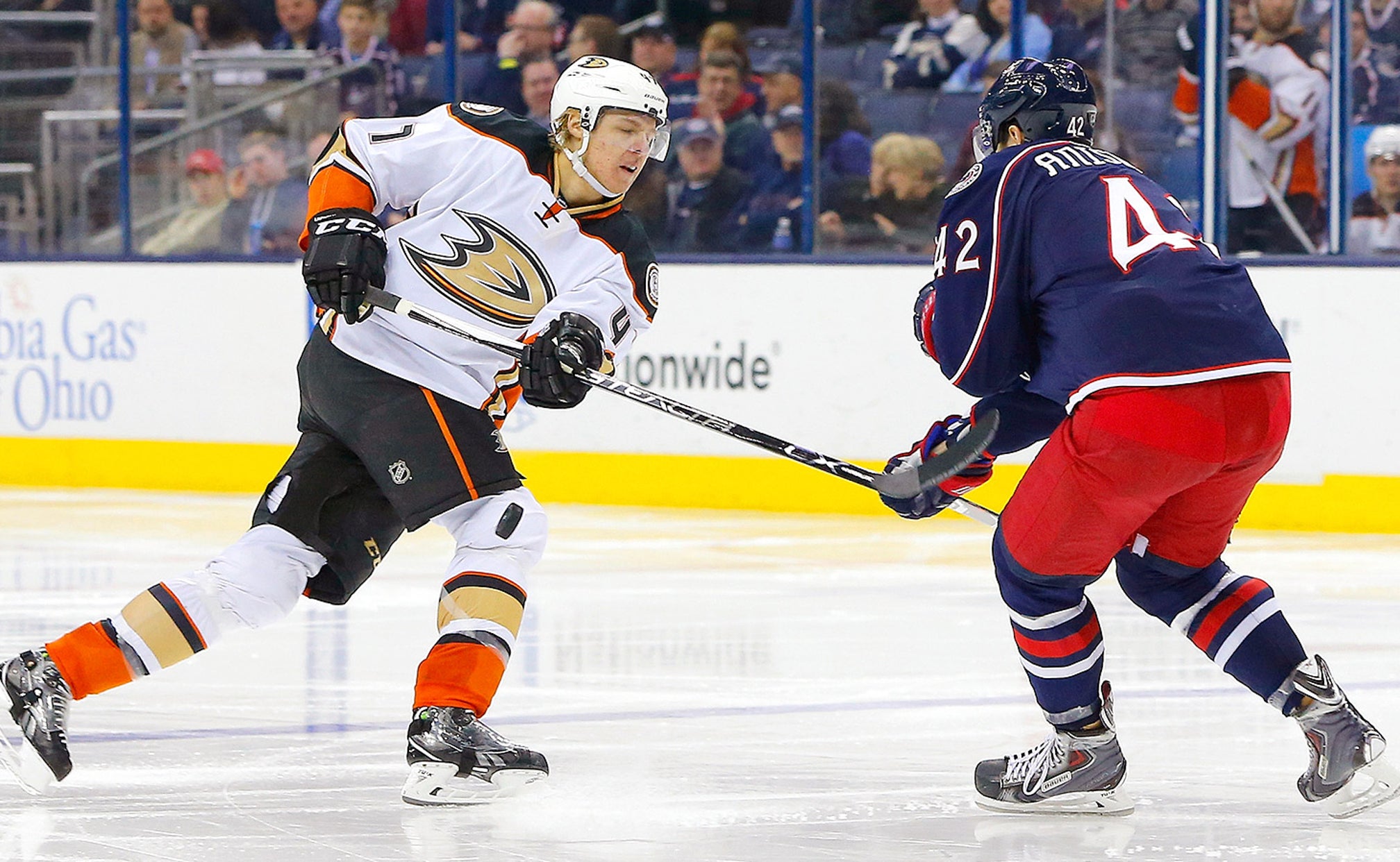 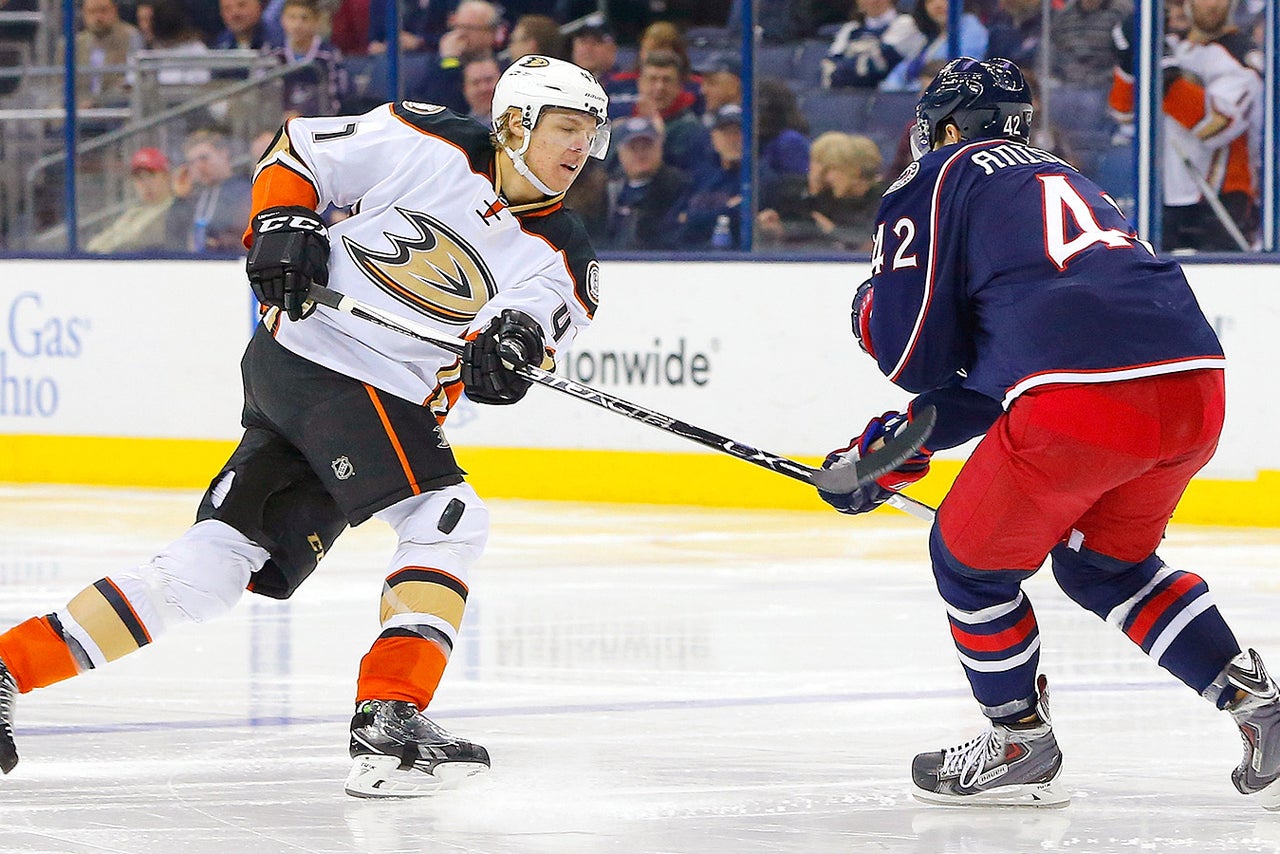 COLUMBUS, Ohio (AP) -- In a season in which injuries and spotty play will keep them out of the playoffs, the Columbus Blue Jackets are still piling up some memorable moments.

Scott Hartnell scored three times, and the Blue Jackets earned their fourth consecutive win by rebounding from a two-goal deficit to beat the Anaheim Ducks 5-3 on Tuesday night.

"It was a measuring-stick game for us," said the 32-year-old Hartnell, a hard-nosed player who has 25 goals and 28 assists after he was acquired in a trade with Philadelphia for R.J. Umberger and a draft pick. "These last few weeks we'll have to measure up against the teams we're playing to gain some confidence going into the summer, knowing that we can play and play well. We want to keep it up."

It was the first hat trick for the Blue Jackets since Cam Atkinson had three goals at Colorado on April 5, 2012. It had been three years and one day since the last Columbus player -- Umberger -- did it at home against Carolina. And it had been just short of two years since Hartnell last accomplished the feat for the Flyers at Montreal.

Ryan Johansen had a goal and an assist, and Nick Foligno scored the go-ahead goal for the Blue Jackets, who came in having lost five of six at home. They still have one of the worst home records in the league at 14-20-4.

The Ducks came in tied for the most points in the league, which just burnished the win for the Blue Jackets.

"It's always fun winning against a team that is probably one of the top three teams in the league," Johansen said. "It's a good feeling. Guys have been playing some great hockey lately."

Sergei Bobrovsky made 36 saves -- stopping the final 18 shots after the Ducks took a 3-2 lead.

Down 2-0 on goals by Ryan Kesler and Andrew Cogliano by the 14:21 mark of the first period, the Blue Jackets scored four of the next five goals -- including three in the second period. Hartnell scored on the power play to cut the deficit in half by the first intermission.

It took a lengthy review in Toronto, but Johansen collected his 24th goal after several minutes. Atkinson's shot was blocked by John Gibson, with the puck popping up in the air and then glancing off his right shoulder and toward the goal line. As the goalie reached for it, Johansen crashed the net, winding up sitting down staring back at center ice with Gibson sprawled next to him.

The officials ruled on the ice that Johansen had scored, although there was no horn, no goal light and no signal. The review was deemed inconclusive.

Matt Beleskey made it 3-2 at 10:05 with a nifty backhander from a hard angle on the right side, but the Blue Jackets mustered two more goals. Hartnell got his second with a rising shot from the right circle after taking a pass from William Karlsson -- his first point for the Blue Jackets.

Artem Anisimov then outbattled two Ducks on the back wall and passed to Jeremy Morin. He then fed Foligno for a hard one-timer from the slot for his 26th of the season -- and the Blue Jackets' first lead of the game.

"It's a tough pill to swallow," Ducks coach Bruce Boudreau said. "We have that meltdown in the second period. In the third period we regained our senses, but sometimes it's too late."

The Blue Jackets stayed on top because Bobrovsky was a brick wall. He stuck a left toe out to push away Rickard Rakell's scoring attempt with 8 minutes left in regulation.

Gibson, who had 22 saves, was pulled for an extra attacker in the final minute. Hartnell then won a puck battle with Sami Vatanen deep in the offensive zone, collected the puck and scored on a wraparound with 37 seconds left for his eighth career hat trick.

The Ducks were angry.

"What we're doing and how we're playing right now is not acceptable," forward Corey Perry said. "We're going to change that in our locker room. We're pretending. We're not playing hockey to the best of our abilities."

NOTES: D James Wisniewski, dealt to Anaheim at the trade deadline along with a draft pick for Rene Bourque, Karlsson and a draft pick, was recognized for his 209 games with the Blue Jackets during a video tribute. ... Karlsson made his Columbus debut. ... The Ducks were upset after Perry was called for embellishment in conjunction with the Blue Jackets' David Savard getting penalized for roughing in the final minute of the second.