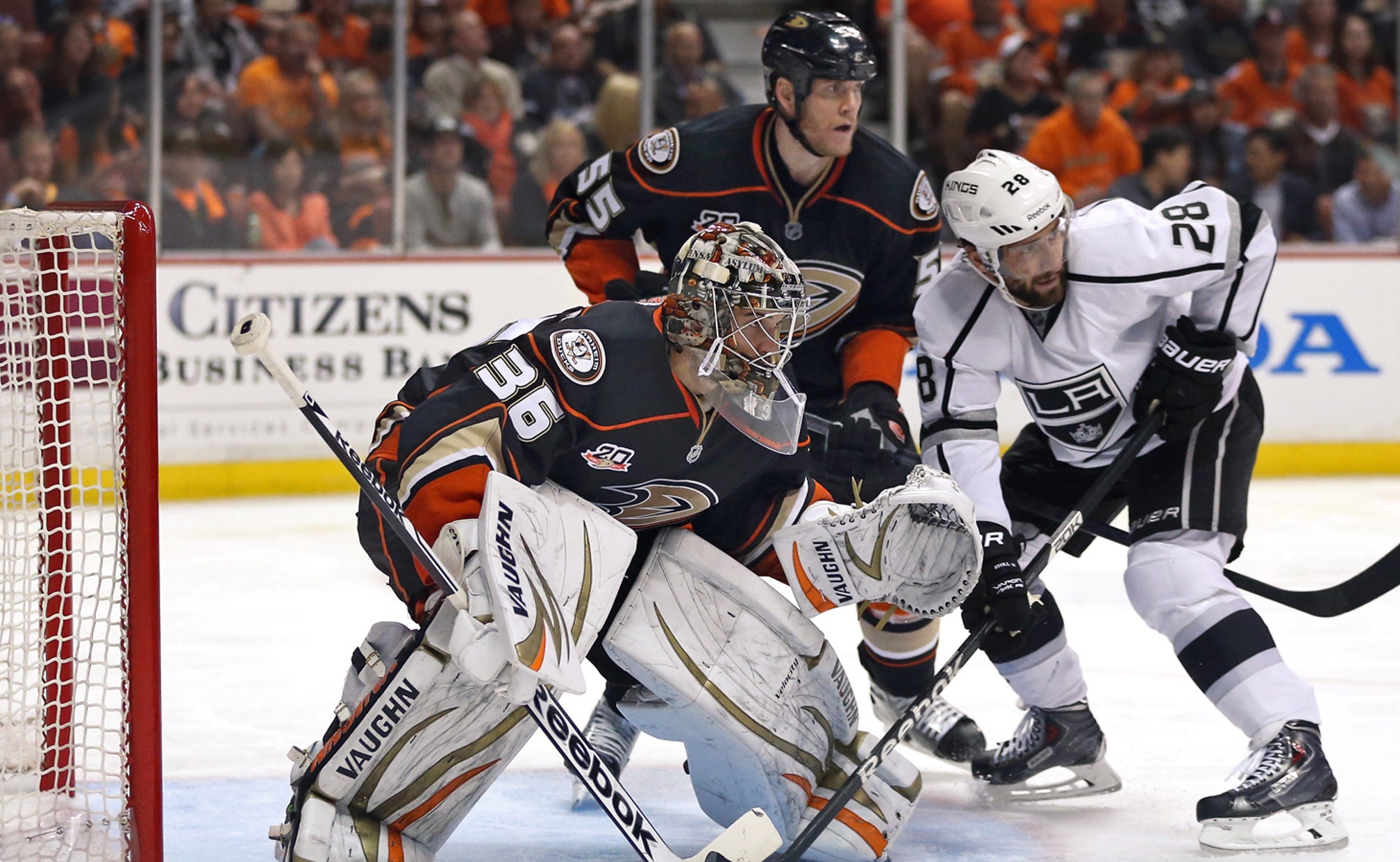 Ducks and Kings to meet in Game 7 Friday night

ANAHEIM, Calif. (AP) -- For the past few years, the Anaheim Ducks have watched enviously while the Los Angeles Kings evolved into phenomenal playoff performers and Stanley Cup champions.

The Ducks want that reputation as much as they want the Cup.

In Game 7 of their second-round series Friday night, they're on the perfect stage to supplant their rivals and to demonstrate they're a title contender, not just a regular-season power.

After five straight wins in elimination games this spring, the Kings won't surrender their postseason supremacy. The Ducks will have to take it at Honda Center in a fitting finale to the Freeway Faceoff.

"When you have our trust and experience with each other, it puts games like this in perspective," Kings captain Dustin Brown said. "We've been through a lot worse. We know what has to be done."

The Kings have pushed another playoff opponent to the limit, and the Ducks have one last chance to push back. After a series filled with tight games, dramatic momentum swings and improbable heroes, Los Angeles and Anaheim will finish their first postseason series with one game to earn a trip to the Western Conference finals against Chicago.

"You say you want to approach this like any other game, but no one believes that," Ducks defenseman Ben Lovejoy said. "This is an exciting time. These are situations that you grow up wanting to be involved in."

The top-seeded Ducks have more at stake than extending beloved forward Teemu Selanne's career. Ducks coach Bruce Boudreau's team had the best regular season in franchise history, but will have little to show for it without one more win over the Kings, who have developed a preternatural poise in tough situations. Los Angeles improved to 6-1 in elimination games over the last two years with its 2-1 win in Game 6 on Wednesday.

"We just have the mentality that nothing is going to stop us," Kings defenseman Drew Doughty said. "We're just a close-knit team that wants nothing more than to be another Stanley Cup champion."

The Kings already won a Game 7 in this postseason, making a merciless rally from three games down to stun San Jose in the first round. Los Angeles coach Darryl Sutter cast his team as the underdog throughout this series, but ramped up the rhetoric immediately after Game 6.

"I think the two rivals, especially the one team that had 116 points, probably would prefer not to play a Game 7," Sutter said. "But (Los Angeles) was prepared to play a Game 7 because we knew that they're a tough team to beat, and if we could get to seven, that meant that we'd done good things."

Boudreau could use a breakthrough along with his team. The coach is 1-4 in Game 7s with Washington and Anaheim, losing four of those at home and never reaching a conference final.

"I think you learn more every year you're in this situation," Boudreau said. "My Game 7 record wouldn't indicate that I've learned anything, but I tend to believe that I have. ... I am due, I think."

The Ducks lost a Game 7 in the first round last year, dropping the final two games of their series against lower-seeded Detroit. That loss to the Red Wings has stuck with the Ducks, whose team workout gear bore the slogan "Unfinished Business" all season.

"I hope guys learned a lot," Anaheim captain Ryan Getzlaf said. "That's terrible feeling when you have that opportunity in front of you and you don't take it."

Selanne isn't the only Finn whose NHL career might hinge on the result. Center Saku Koivu is contemplating retirement after a lengthy career in Montreal and Anaheim.

Game 7 will conclude an eventful series that seems certain to boost hockey's growing popularity in Southern California. The road team won the first four games before the home teams rallied for two victories.

Kings forwards Mike Richards, Marian Gaborik and Justin Williams are all 5-0 in a Game 7 in their NHL careers, while Jeff Carter is 3-0. Williams, a two-time Stanley Cup winner, has scored five Game 7 goals.

The goalie matchup features the same stark contrast that defined the past three games -- ever since Boudreau chose 20-year-old John Gibson over veteran Jonas Hiller. Less than two weeks after Gibson was stopping pucks in the minors, he's in a winner-take-all game against Jonathan Quick, the Conn Smythe Trophy winner and U.S. Olympian who has never lost a Game 7.

Gibson doesn't have Quick's experience, but Boudreau knows there's no other way to get it.

"There's not a person in either room that hasn't dreamed about what (happens) if they're successful, and the opportunities that await them," Boudreau said.