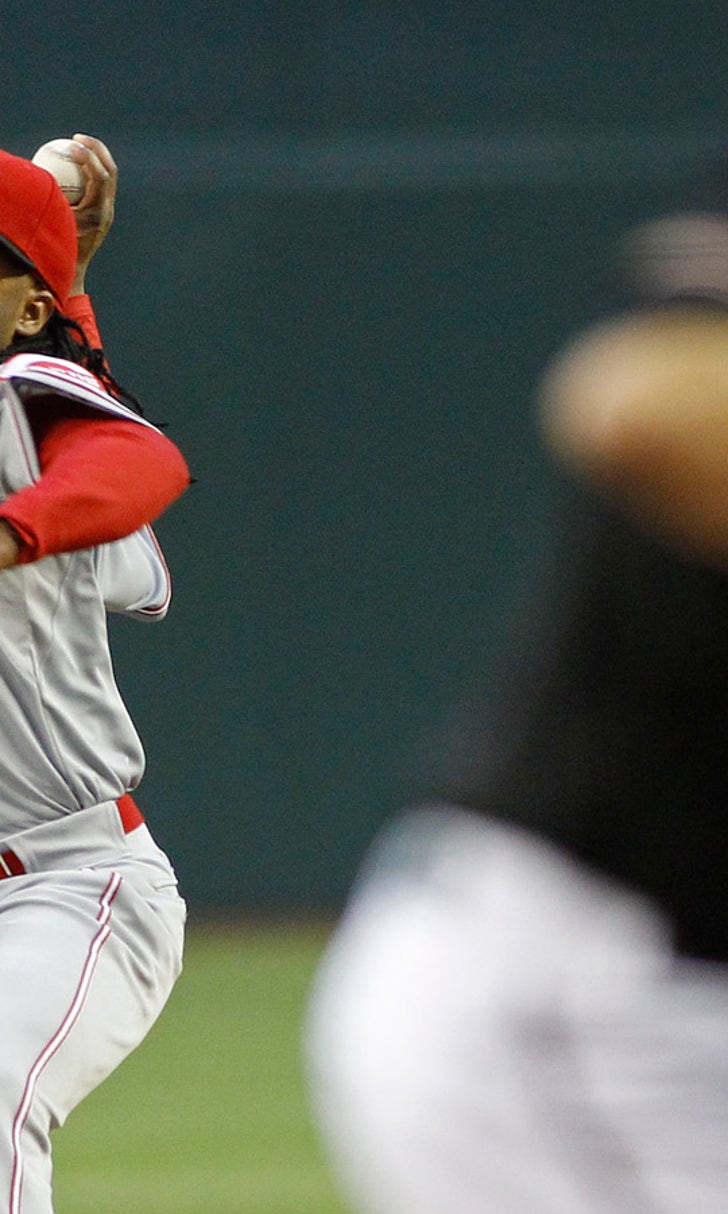 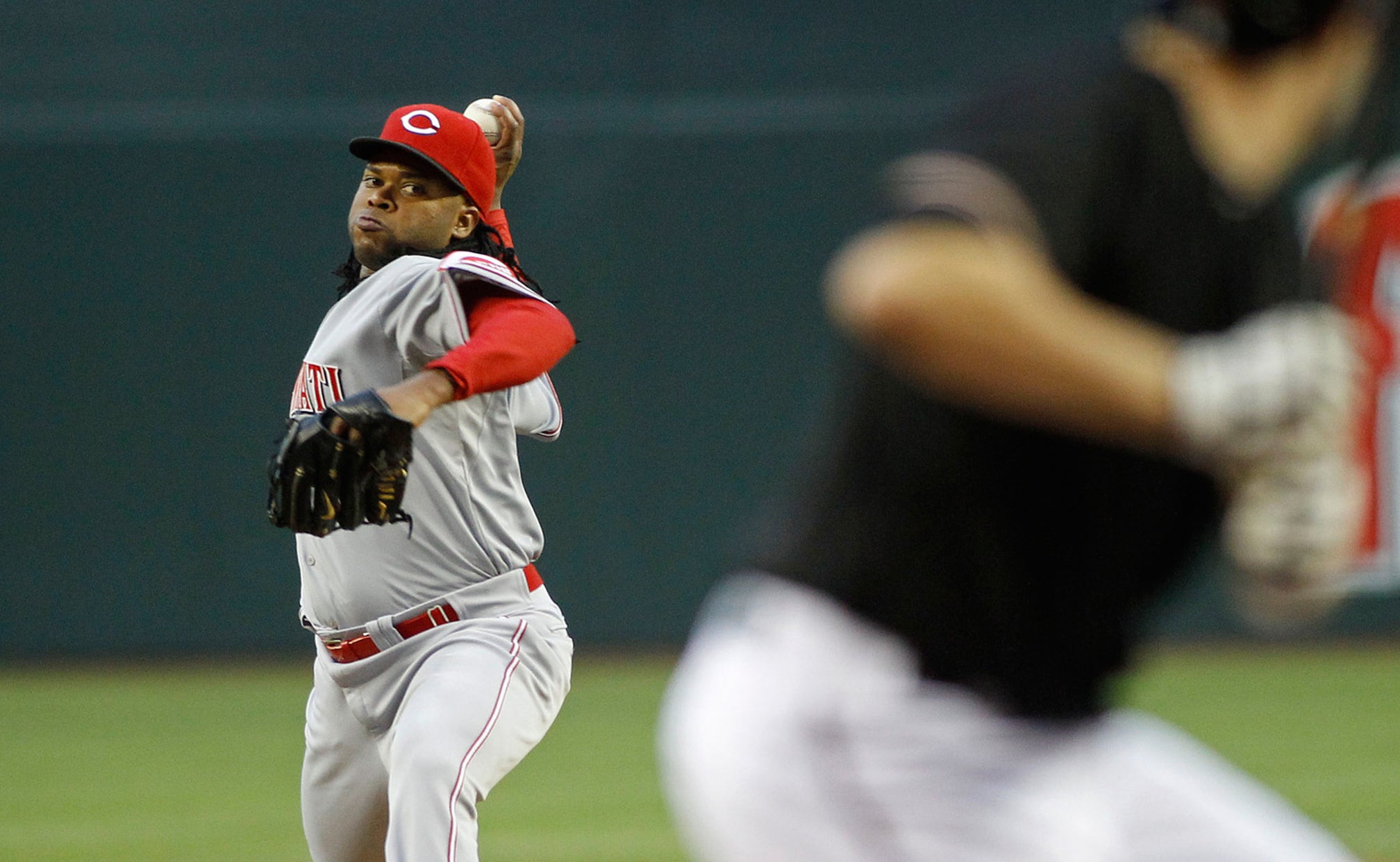 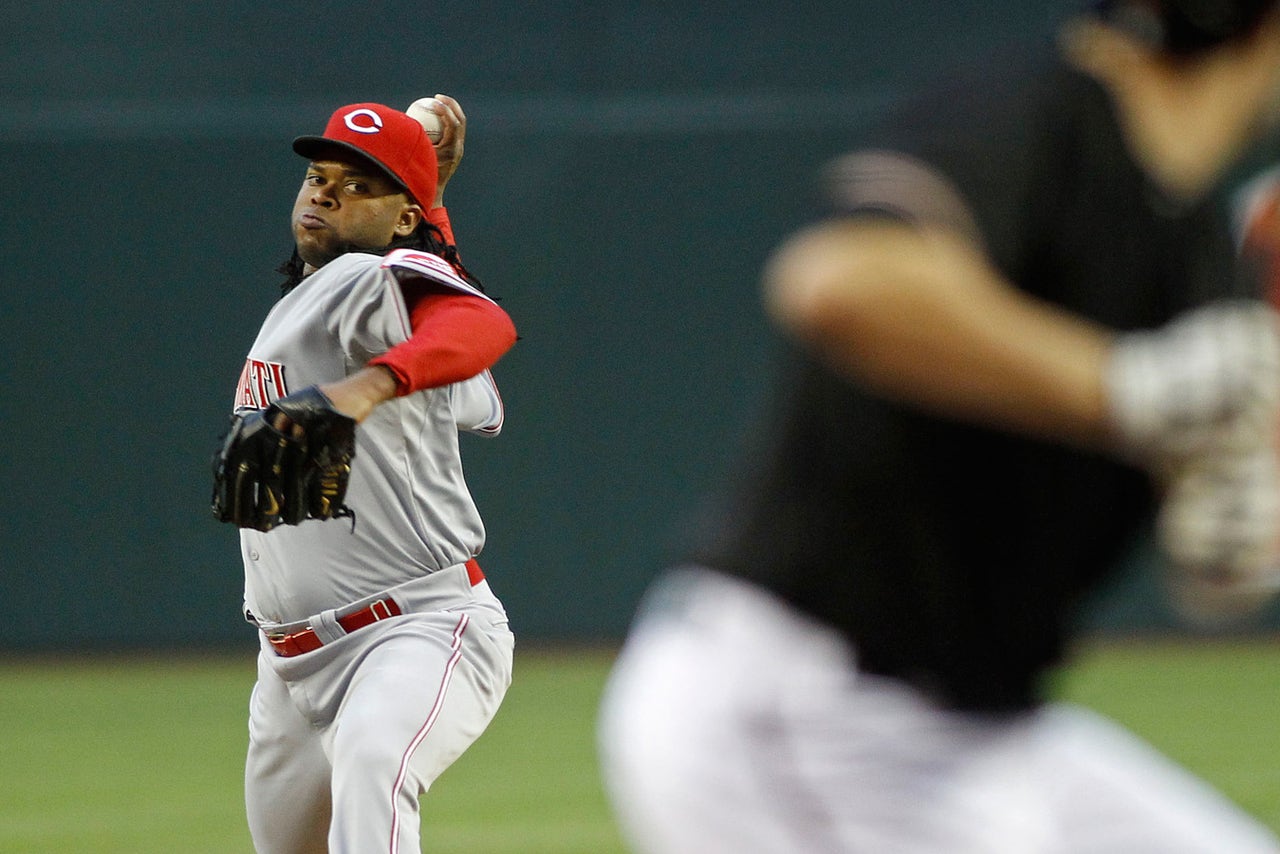 PHOENIX -- Unsatisfied after a pair of losses, Johnny Cueto told his teammates he would pitch well against the Arizona Diamondbacks. Just get me two runs, he told them.

The Reds did more than that. Not that he needed it.

Cueto pitched effectively into the eighth inning and the Reds gave him some rare run support in a 5-0 win over the Arizona Diamondbacks Saturday night.

"He backed his word," Reds catcher Brayan Pena said. "He said it was going to be a good one and we gave him much better run support today."

The Reds have had trouble hitting with Cueto (5-4) on the mound this season, but followed Friday's big offensive night by scoring all five runs off Diamondbacks starter Brandon McCarthy (1-7) in consecutive innings.

Billy Hamilton ignited Cincinnati's offense with two hits and two runs from the leadoff spot. Brandon Phillips had a pair of run-scoring singles off McCarthy and the Reds had 11 hits to win for the third time in four games.

Cueto allowed five hits and struck out seven in 7 2-3 innings, and Jonathan Broxton escaped a bases-loaded jam in the eighth to preserve the Reds' sixth shutout of the season.

"Another excellent performance," Reds manager Bryan Price said of Cueto. "Certainly needed because we're trying to put some wins together. We've won some series, but we really haven't run off a winning streak, which would really help us."

That wasn't even the worst news of the night for the Diamondbacks. Not even close.

Center fielder A.J. Pollock, arguably Arizona's best player over the past month, broke his right hand while swinging at a pitch by Cueto in the eighth inning.

"That is a big blow," Arizona manager Kirk Gibson said. "He has been playing great, emerging. He has been huge for us. I don't know how else to say it."

Cueto has been superb most of the season, leading the NL in batting average against at .148 with an ERA of 1.83, third-best in the league. He also allowed two earned runs or less in 10 of 11 starts before Saturday.

The problem has been getting help from Cincinnati's offense.

The Reds have scored an average of 2.8 runs per game when Cueto is on the mound, including one total run his previous two starts combined.

Cincinnati did break out of its offensive doldrums a bit against the Diamondbacks on Friday night, beating up on former teammate Bronson Arroyo in a 6-4 win that included 11 hits and a grand slam by Devin Mesoraco.

The Reds kept rolling against McCarthy, scoring three runs in the fourth inning on run-scoring singles by Phillips and Todd Frazier and Brayan Pena's RBI double.

Skip Schumaker added a run-scoring double in the fifth inning and Phillips chased McCarthy with an RBI double -- he was thrown out trying to stretch it to a triple -- that put the Reds up 5-0.

McCarthy allowed five runs on nine hits in 4 1-3 innings, matching his totals in 6 2-3 innings against San Diego his previous start.

"I am starting to give up runs again and that is kind of where it's been," McCarthy said. "A few quality innings and then things turn and I don't have any understanding why."

Cueto got off a shaky start, giving up a pair of one-out singles in the first inning, but wriggled out of it, stranding runners at second and third.

The right-hander worked quickly and efficiently over the next six innings, twice stranding runners in scoring position. He was lifted with one out in the eighth after a walk and a hit batter.

Arizona loaded the bases after Parra hit an infield single, but Broxton struck out Paul Goldschmidt and got Miguel Montero to fly out to end the threat.

"He just answered the bell," Price said of Broxton. "He faced two of their most productive hitters and did a terrific job."

NOTES: Hamilton stole second in the fifth inning to reach 20 for the season. ... Arizona's Gerado Parra went 2 for 3 against Cueto and is 6 for 15 with three doubles, two homers and three RBIs career against him. ... Arizona LHP Wade Miley, the starter in Sunday's series finale, struck out a career-high 11 in his last start, but was not part of the decision on the 4-3 loss to the Padres. He will face Reds RHP Alfredo Simon, who failed to get out of the fourth inning against the Dodgers his last start.