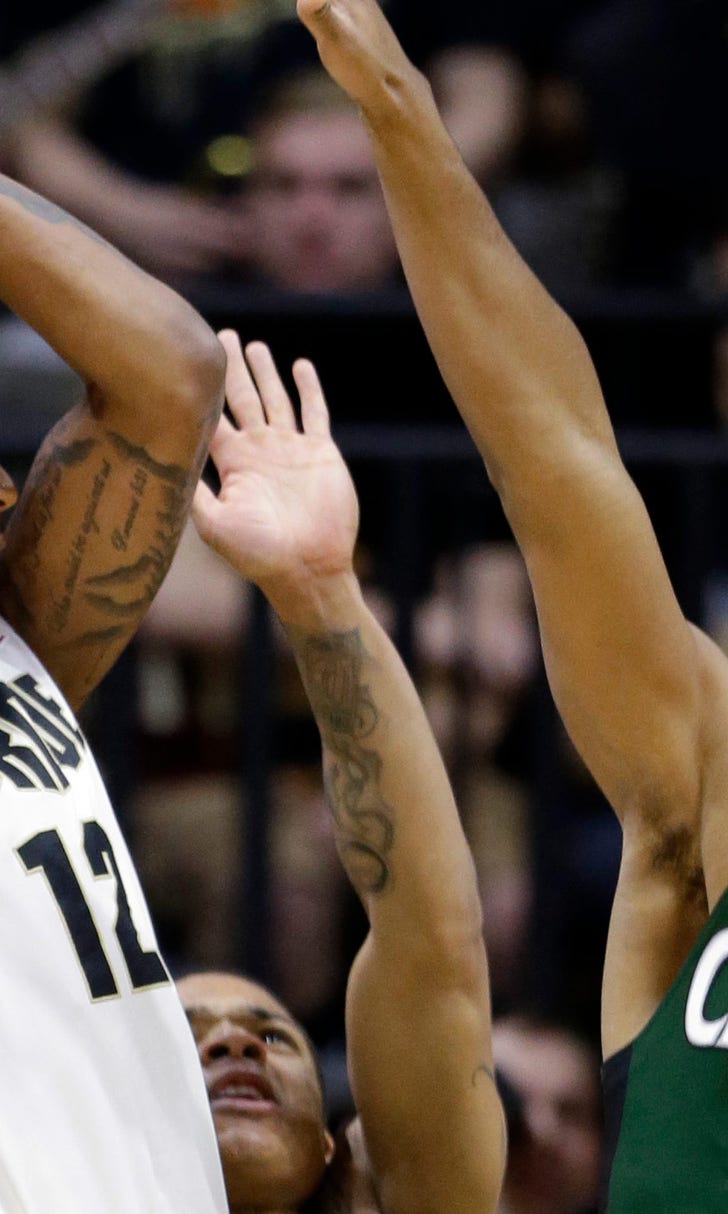 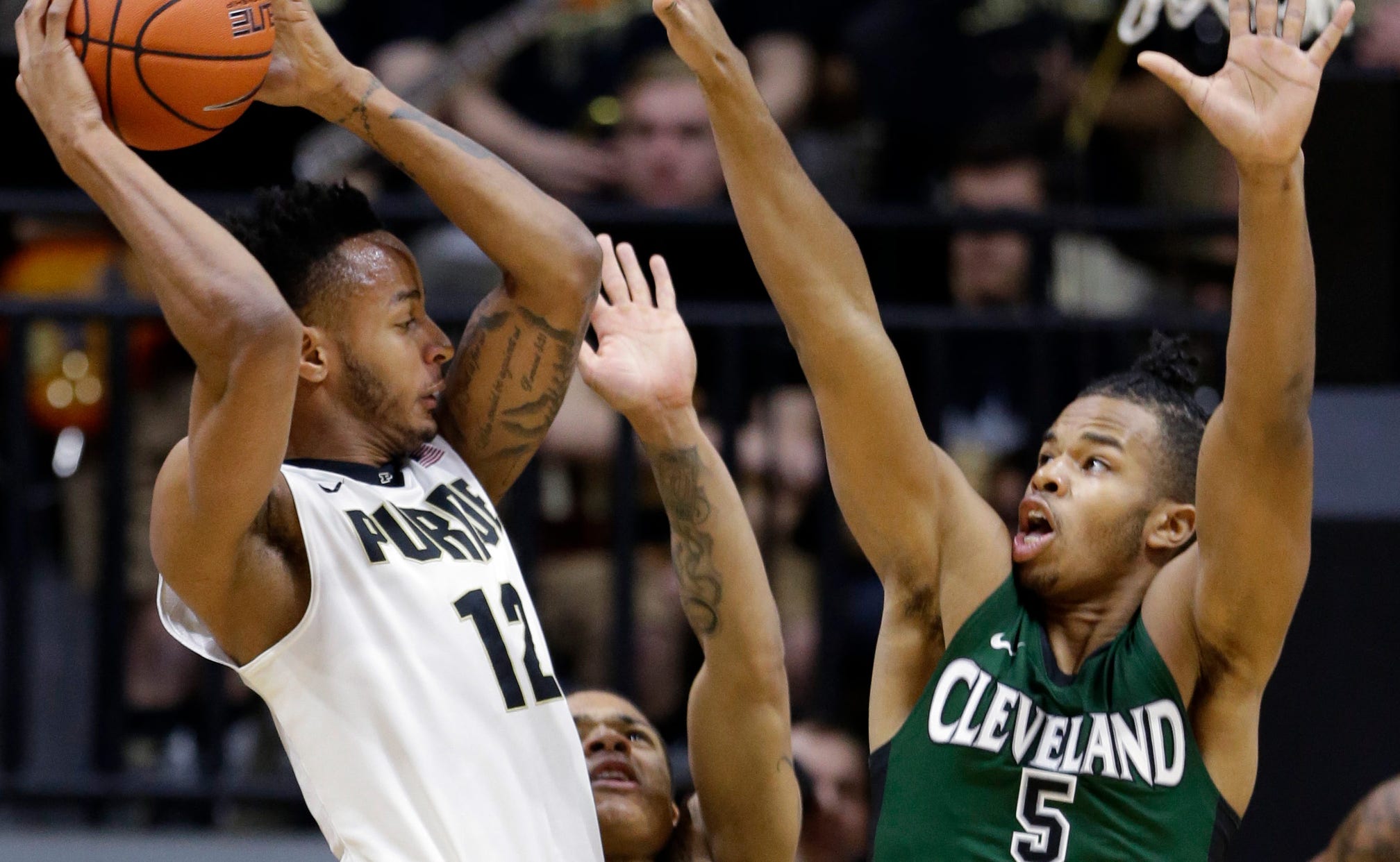 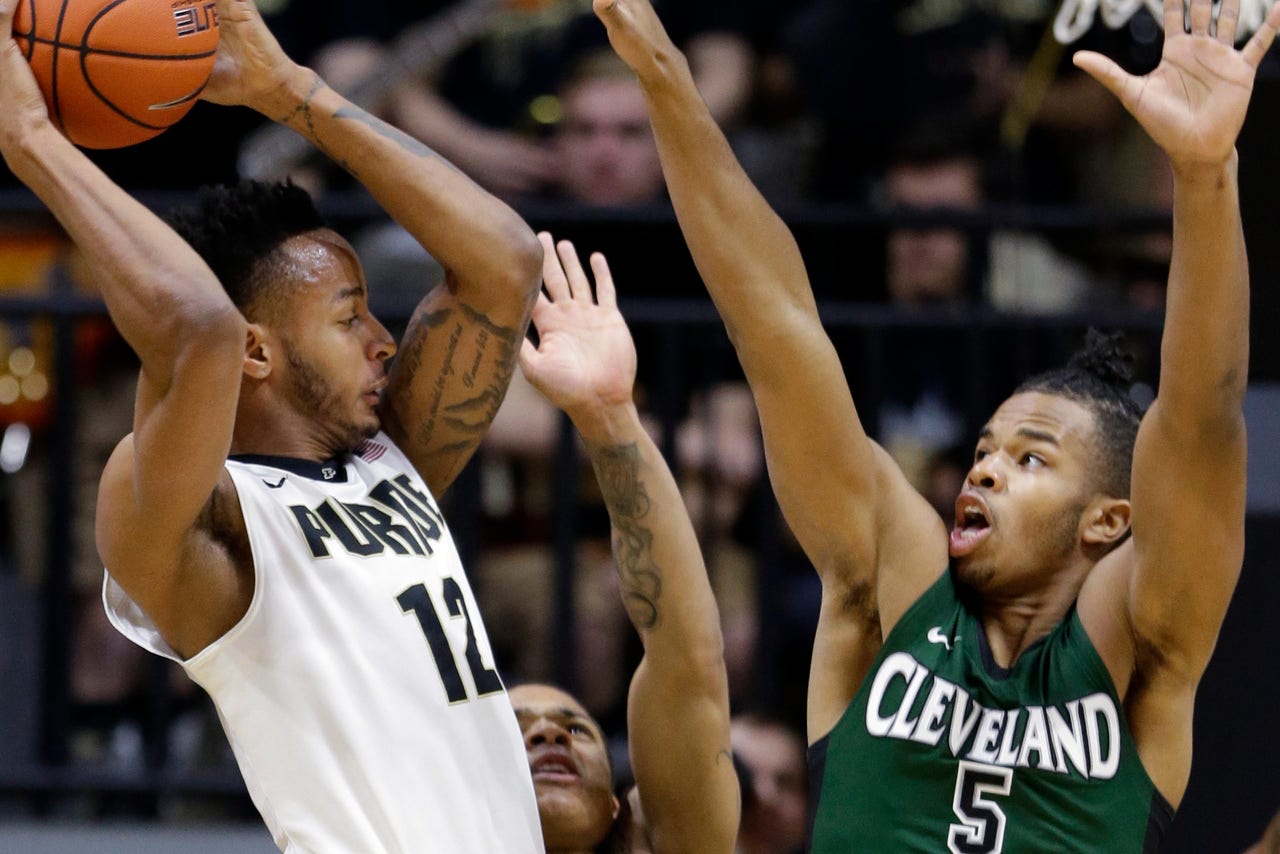 WEST LAFAYETTE, Ind. -- No. 18 Purdue currently has only eight healthy scholarship players. At this point in the season, it hasn't been a problem.

Isaac Haas scored 14 points, Caleb Swanigan had 13 points and 10 rebounds and Dakota Mathias added 12 points on four 3-pointers, leading the Boilermakers to a 77-53 victory over Cleveland State on Saturday.

Fifth-year graduate student point guard Spike Alnrecht (back) and sophomore forward Jacquil Taylor (foot surgery) are out indefinitely. However, Purdue is getting balanced scoring and solid defense from its eight healthy scholarship players.

The Boilermakers (8-2) finished the first half on a 12-0 run to lead 41-20 and never were threatened thereafter, leading by as many as 27 points in the second half.

"That run to close the first half was huge, especially since they had started to make shots right before that and had a little momentum going," Mathias said. "Coming out of that last media timeout, we had to close out the first half strong, so we did. We were aggressive and got into the passing lanes."

It was a 5:15 stretch Cleveland State would like to forget.

"The run to close the first half was big for (Purdue) after we cut it to nine," Cleveland State coach Gary Waters said. "We made some errors, they started hitting some shots and they picked up their defense. They are a great team, and that's what great teams do."

Bobby Word had 14 points to lead Cleveland State (3-6), which shot only 26.7 percent (8 of 30) during the pivotal first half. Vikings leading scorers Word, Rob Edwards and Demonte Flannigan scored only 24 combined points on 9-of-35 shooting from the field.

Vince Edwards added 11 points, six rebounds and four assists for the Boilermakers, who have won each of their past three games by at least 24 points. Mathias finished with six rebounds, seven assists and no turnovers to go with his 12 points in 26 minutes.

"Vince Edwards had a lot to do with that 12-0 run to close the first half, and right now, having the balance that we have is a really good thing," Purdue coach Matt Painter said. "Our guys were ready to play today, including Dakota, who really did a nice defensive job on Edwards. We relaxed a little bit once we got a 20-point lead, but sometimes that happens."

Edwards liked the way Purdue limited the Vikings to 31.3 percent shooting (20 of 64).

"Guys did a really good job on defense and with help defense," Edwards said. "We were really helping each other out by scrambling on the floor. I think that made a big difference. We were active, and we also were getting on the glass."

The Boilermakers outrebounded the Vikings, 44-34.

Cleveland State: The Vikings, who came to Purdue having won two in a row, stayed close for a while by making seven 3-pointers in the first 24:04 but had no answer for Purdue's 7-2 Haas and 6-8 Swanigan.

Purdue: The Boilermakers once again featured a solid blend of interior and perimeter scoring to win for the seventh time in the past eight games. Purdue entered this game shooting 44.8 percent from 3-point range -- second best nationally -- and shot 43.8 percent from beyond the arc in the first half Saturday.

UP AND DOWN DAY

Swanigan added another double-double with 13 points and 10 rebounds but was not happy after making eight of the Boilermakers' 15 turnovers.

"It's not on the team, it's on me and Vince Edwards because the last game we had a lot of turnovers, but Vince cut his down to two, and I have to try to do that," Swanigan said.

Cleveland State: The Vikings play on Dec. 17, at Ohio University.

Purdue: The Boilermakers will play No. 23 Notre Dame on Dec. 17 in Indianapolis' Bankers Life Fieldhouse.