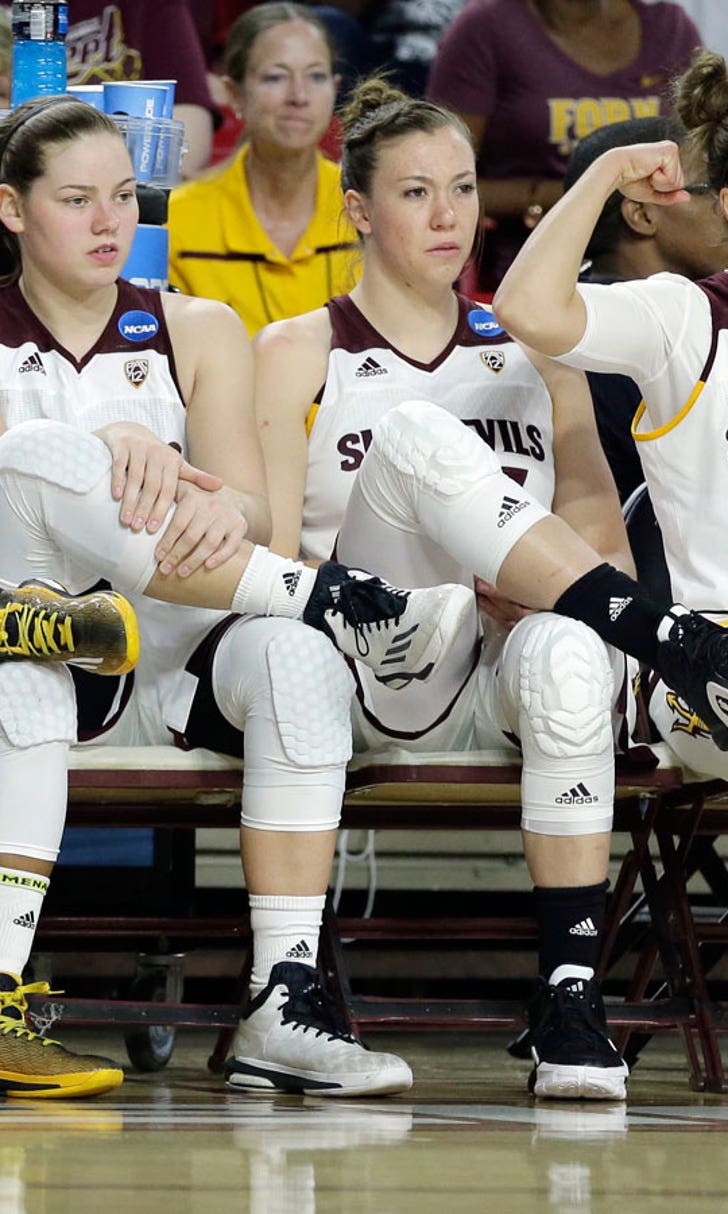 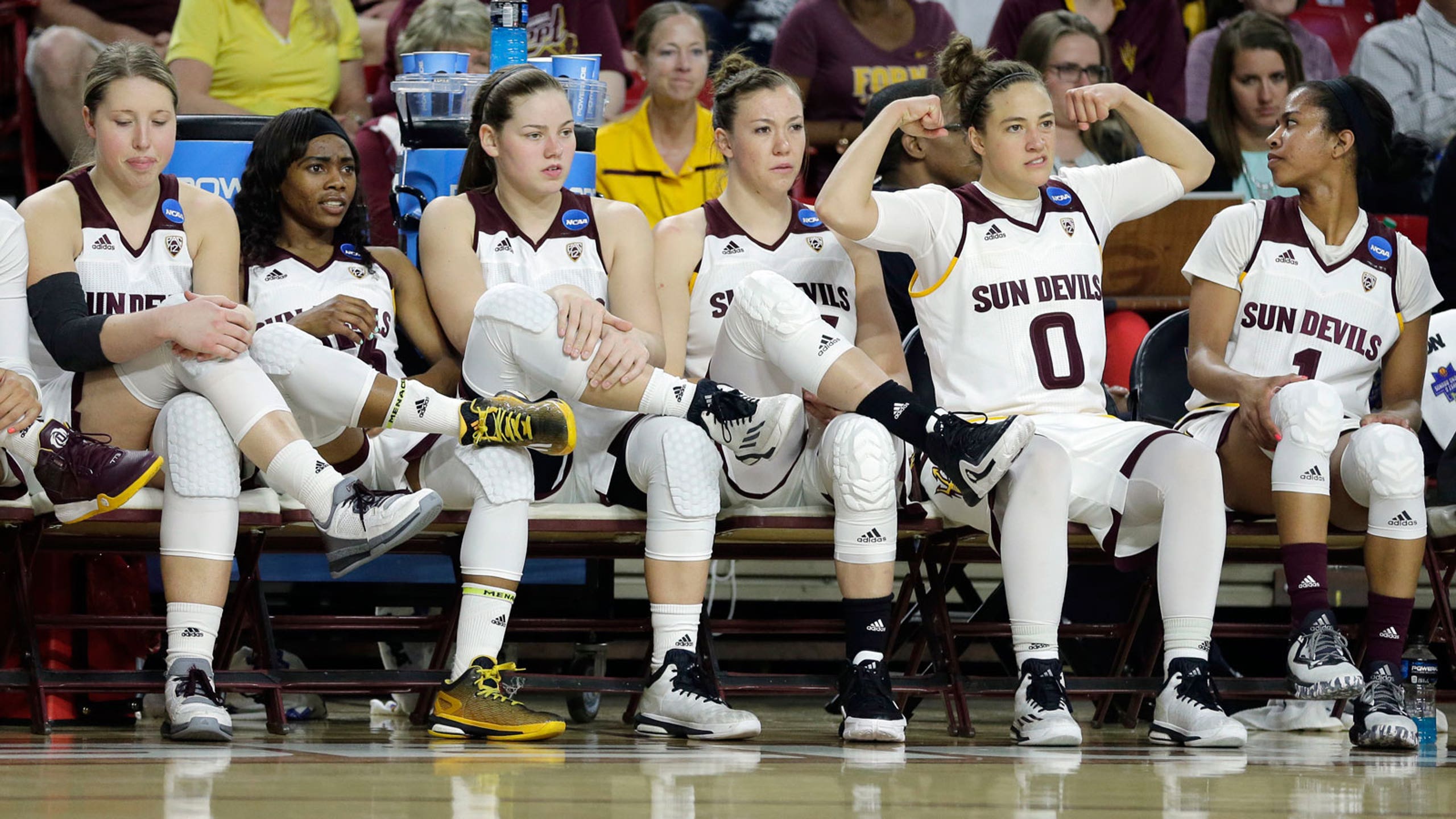 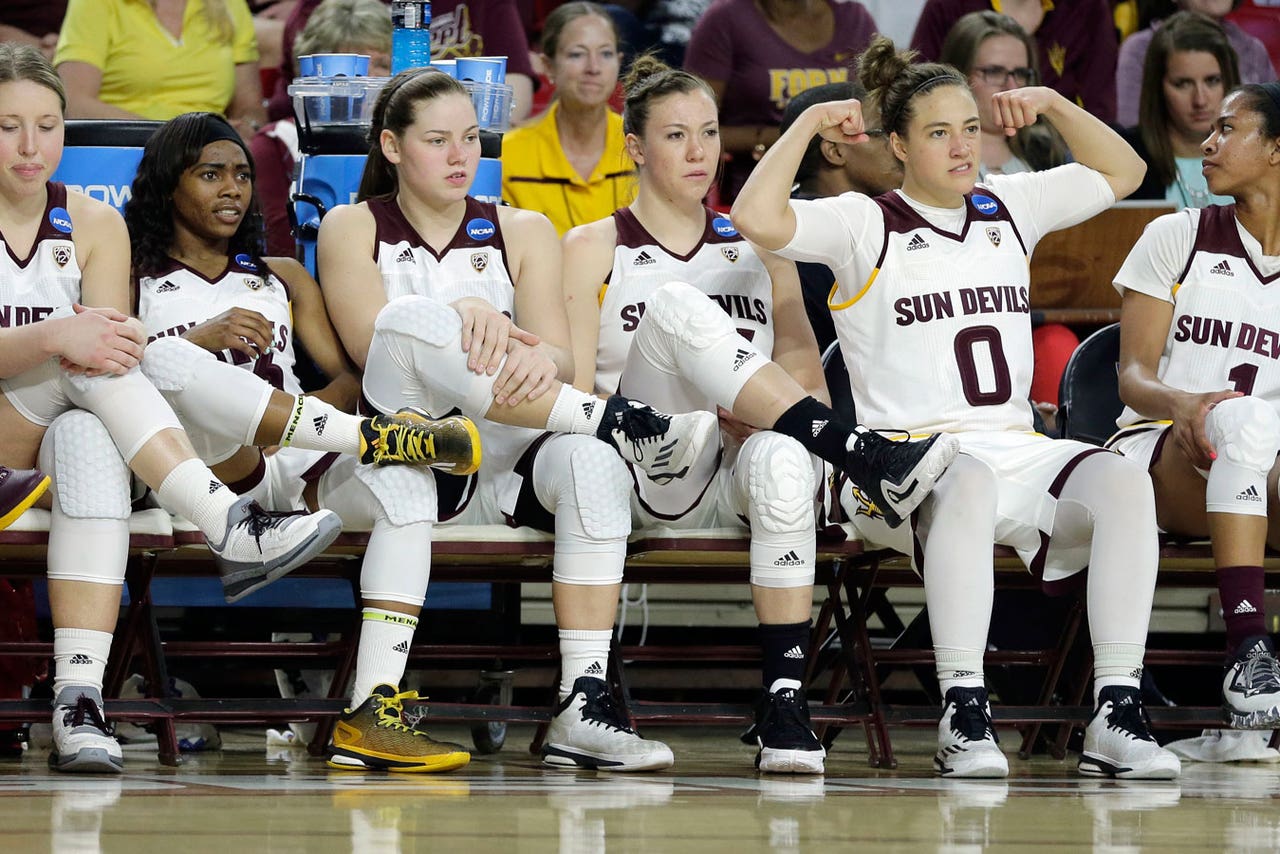 TEMPE, Ariz.  -- Katie Hempen stroked in a 3-pointer to open the game and leaped in the air as she turned back, thrusting her arm in the air while letting out a scream. Next trip, another 3 and the rout was on.

So much for Arizona State stumbling into the NCAA Tournament.

Hempen opened with a pair of 3-pointers and tied an NCAA Tournament record by making all six of her attempts, scoring 20 points to help Arizona State run away from New Mexico State 74-52 in the first round of the NCAA Tournament on Friday.

"We tried to do everything we could to stop her, but she was just hot," New Mexico State's Moriah Mack said. "She made everything she shot."

The No. 2 seed in the Sioux Falls Region, Arizona State (26-6) bounced back from a pair of losses to end the season with a dominating performance in the NCAA Tournament. The Sun Devils shot 54 percent, made 7 of 15 from 3-point range and hounded the 15th-seeded Aggies into one mistake after another.

Elisha Davis added 13 points and six assists for Arizona State, which moves on to face No. 7 seed Tennessee in Sunday's second round. Hempen's six 3-pointers matched the most without a miss in NCAA Tournament history.

"ASU Sun Devil basketball is pressure," said Hempen, who made 7 of 8 shots overall after struggling with her shot late in the season. "We try not to give one free bounce, one free touch."

New Mexico State (26-5) struggled with the Sun Devils' pressure, finishing with 21 turnovers that led to 26 points for Arizona State.

Sasha Weber had 18 points to lead the Aggies, who were 4 for 20 from the 3-point arc and never recovered from Arizona State's early onslaught.

"You know why were turned it over? Because they were aggressive, they got in our face, they stole the ball," New Mexico State coach Mark Trakh said. "They just flat-out outplayed us in the first half. We didn't make shots because they defended us."

New Mexico State earned it second straight NCAA Tournament appearance and fourth in school history by rolling through the WAC tournament. The Aggies were blown out by No. 1 seed Maryland last year and were hoping to avoid a repeat against the deep, tenacious Sun Devils.

Arizona State reached the Sweet 16 last season and built upon it this year, using a 15-game winning streak to share the Pac-12 regular-season championship.

The Sun Devils ended the regular season by losing to UCLA and had an opening loss to California in the Pac-12 Tournament, but did not let that affect their confidence. Learning they were still No. 2 seed -- highest in program history -- in the Sioux Falls Region certainly helped.

It certainly carried over into the opener against the Aggies.

Hempen got it going with her two 3-pointers to set the tone.

The Sun Devils ran away from there behind their defense, opening up a quick 10-point lead.

Creating havoc with its pressure, Arizona State made it hard for the Aggies to get into their offense, much less get good looks at the basket. New Mexico State had seven turnovers that led to 11 points for the Sun Devils and just three field goals (12 attempts) to trail 22-13 after the first quarter.

The Sun Devils -- namely Hempen -- gave the Aggies no shot of a comeback. She hit three more 3-pointers -- making all five attempts in the first half and had 17 points by halftime, helping Arizona State to a 45-24 lead.

New Mexico State had nearly twice as many turnovers (15) as field goals (8) in the first half.

"Arizona State really came out and made a statement in the first half," Trakh said.

The Aggies were more efficient offensively in the third quarter -- four turnovers, 9-of-16 shooting -- yet weren't able to make up any ground. Arizona State made 8 of 15 shots in the quarter to lead 65-44.

New Mexico State has won the WAC in consecutive seasons to reach the NCAA Tournament twice after doing it twice as a program before that. Now it's time to take the next step.

"I'm not going to coach at New Mexico State to win the WAC every year," Trakh said. "I want to come in here and have more than a cup of coffee. I want to have a whole sandwich next time."

New Mexico State: Coach Mark Trakh is 2-7 in the NCAA Tournament, with both wins coming at USC. ... The Aggies had six turnovers in the second half.

Arizona State: The Sun Devils are 5-1 in NCAA Tournament games played in Tempe. ... ASU had 18 assists on 30 field goals.

New Mexico State's season is over.

Arizona State faces No. 7 seed Tennessee in the second round.