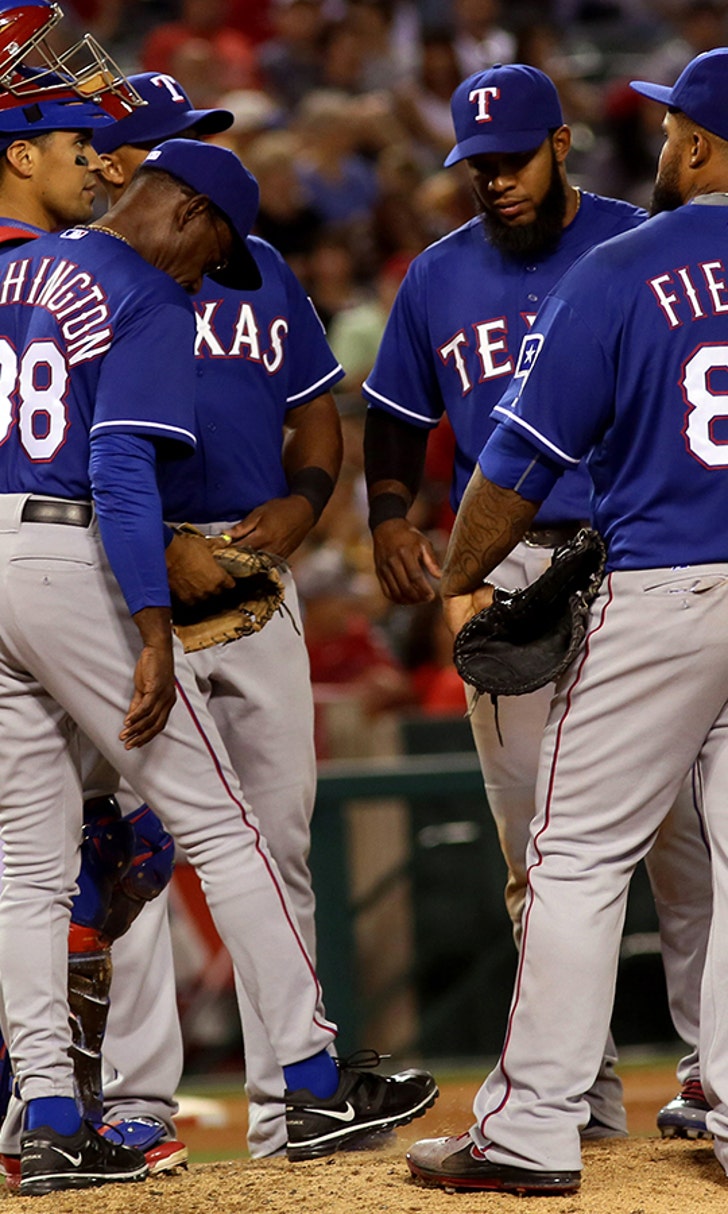 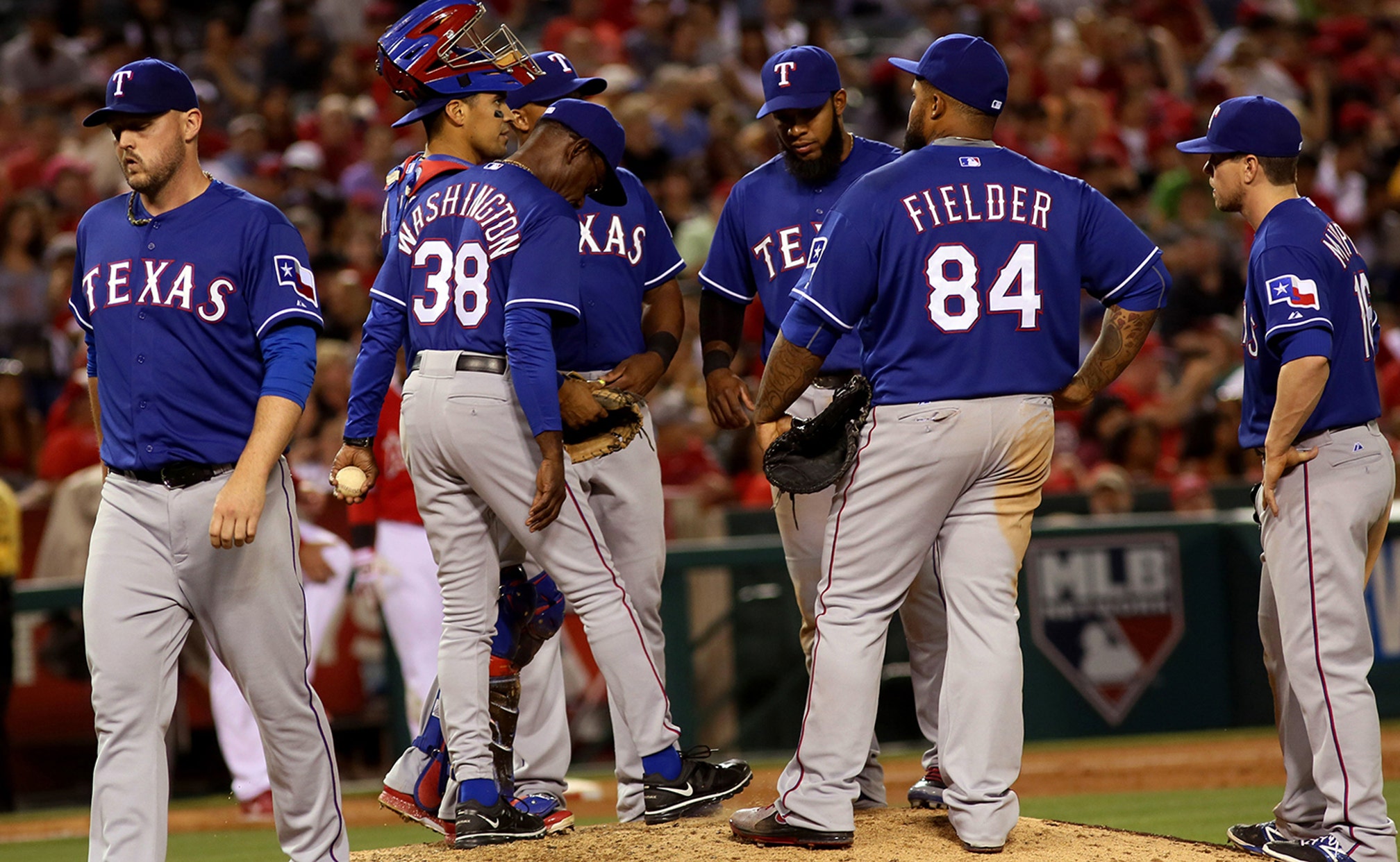 Angels get best of Harrison, Rangers in loss 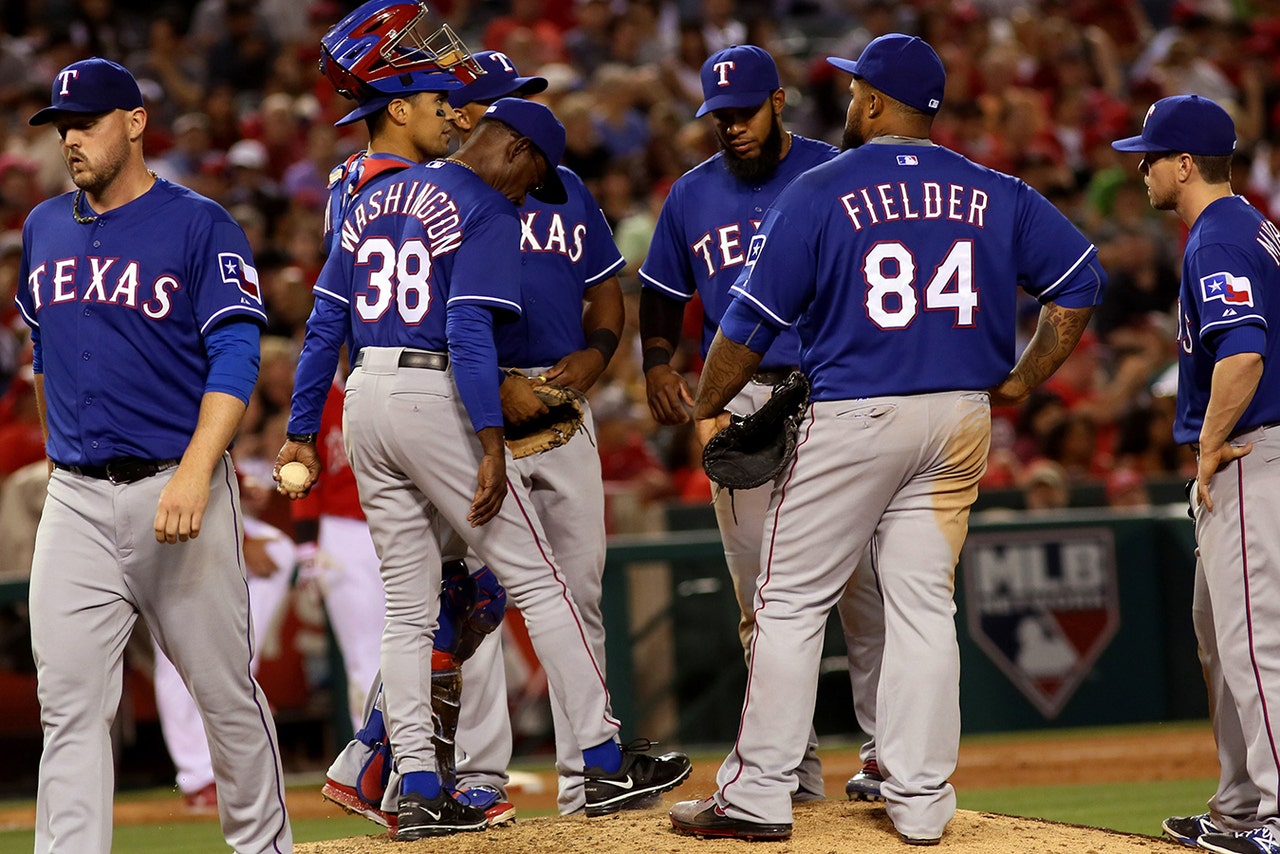 ANAHEIM, Calif. (AP) -- The bloodlines preceded C.J. Cron to Angel Stadium. His father played at the "Big A" when it was still called Anaheim Stadium and the team was known as the California Angels.

The only thing that would have made Saturday night perfect for the 24-year-old in his big league debut would have been to see Chuck Cron in the stands watching. He hit an RBI single on the first pitch he saw at the major league level, then doubled his second time up and hit a tiebreaking RBI single in the sixth inning to lead the Angels to a 5-3 victory over the Texas Rangers.

"It was unbelievable, man. Every ballplayer's dream is to be at this stage, and just being able to help the team win is an awesome feeling," Cron said. "I don't think it's really sunk in yet. There were obviously nerves. It's tough not to have them, but you have to contain them. Once the first pitch was thrown in the game, I calmed down a little bit."

Cron led all of minor league baseball with 123 RBIs in 2012 while playing for Inland Empire of the Class-A California League. His three hits Saturday were one more than his father's entire major league total. Chris Cron was 2 for 25 in 12 games with the Angels and Chicago White Sox between 1991 and 1992.

"It's awesome. My dad was drafted by the Angels and played with them, so I'm just kind of following in his footsteps," Cron said. "I haven't spoken to him yet. I know he was in the Dominican today, so I'm not sure if he's home yet. But I'm sure he'll call me sooner than later."

Howie Kendrick capped his first four-hit game of the season with an RBI double in the ninth and scored two runs. Right-hander Garrett Richards (3-0) allowed three runs and nine hits over six innings with two walks and a career-high nine strikeouts after three straight no-decisions.

Kendrick doubled with two outs in the sixth against reliever Shawn Tolleson (0-1) and scored the go-ahead run when Cron lined a 1-1 pitch to left. Joe Smith followed Fernando Salas and Ernesto Frieri out of the Angels' bullpen and got three outs for his third save in as many chances since replacing Frieri in the closer's role.

Cron, born in nearby Fullerton and drafted by the Angels with the 17th overall pick in 2011, had his contract purchased from Triple-A Salt Lake before the game after third baseman David Freese went on the disabled list with a non-displaced fracture of his right middle finger. Freese was hit by a pitch in the Angels' series-opening 5-2 loss.

Matt Harrison made his second start of the season for the Rangers, allowing three runs and 10 hits in 4 1-3 innings. The left-hander, was pitching on five days' rest -- a combination of Thursday's off day and the team's desire to keep his turn in the rotation from coming up during next week's interleague series at Colorado.

Harrison, who signed a five-year, $55 million contract after winning 18 games in 2012, was sidelined for more than a year because of back problems after losing to the Angels in his second start of 2013.

For the second straight night, the Rangers spotted the Angels a 2-0 lead before pulling ahead 3-2. Prince Fielder led off the fourth with a single and scored on a fielder's choice grounder by Mitch Moreland. Chirinos and Shin-Soo Choo drove in the tying and go-ahead runs with two-out RBI singles.

Choo was back in the lineup after leaving Friday's game in the seventh because of soreness on the outside of his left ankle.

"He came in today and got some treatment, so he feels better," manager Ron Washington said. "But it probably will linger. I mean, we're talking about his ankle. So as long as he's playing, I can't see how he's going to get it one hundred percent well. But he can perform with it, so we'll see."

The Angels tied it in the fourth with an RBI single by Albert Pujols.

Cron drove in Mike Trout with a two-out single to left. Choo's one-hop throw to the plate bounced off Chirinos's glove, allowing Cron to take second. But Erick Aybar grounded out to shortstop Andrus, whose low throw was scooped out of the dirt by Prince Fielder.

The Angels added a run in the third on a fielder's choice grounder by Aybar, after Kendrick's infield single and a drive to right-center by Cron that bounced out of center fielder Leonys Martin's glove as he ran full-speed toward the warning track.

NOTES: After walking his first batter of the game, Richards struck out Andrus, Adrian Beltre and Fielder in succession. Fielder fanned on a ball in the dirt, one pitch after Choo stole second with an enormous jump before Richards came out of the stretch in his delivery. ... Beltre, still looking for his first home run, has played eight games since coming off the DL.