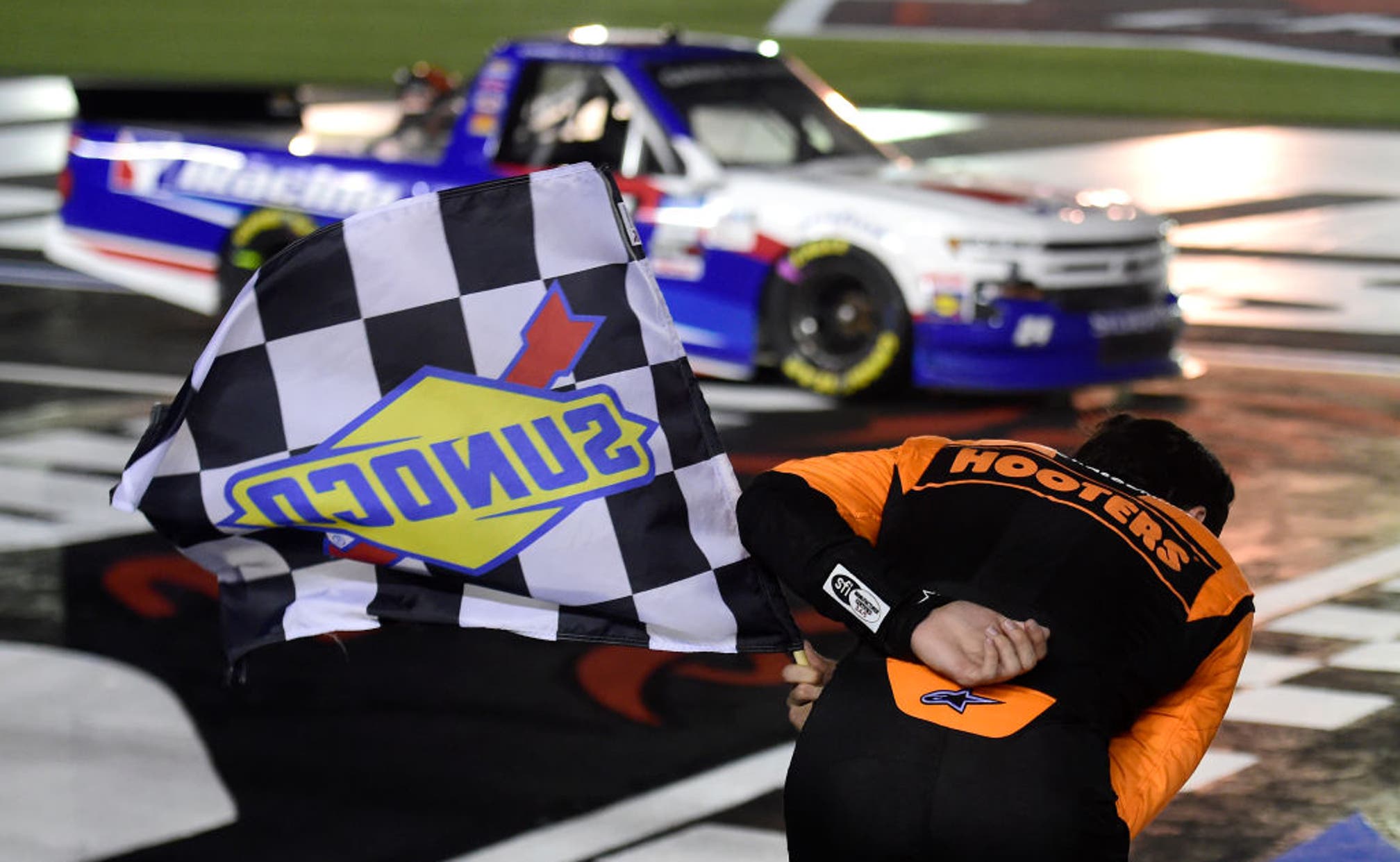 Chase Elliott finally had a feel-good moment in May.

Winning a Gander RV Trucks race at Charlotte Motor Speedway made him feel good Tuesday night – not as great as a Cup race would make him feel, but good enough to take a bow.

That bow signaled his beating Kyle Busch in the North Carolina Education Lottery 200, not just for a victory, but to capture the Kevin Harvick-created “bounty” for any Cup driver to beat Busch.

Busch, who had won the last seven truck races he had entered dating back to 2018, has a signature bow when he wins and Elliott did his best impression of it with a laugh.

“It was a spur of a moment thing,” Elliott said. “I thought we have had so much fun with this with Kevin putting up the money and Kyle is a good sport about it, I hope.

“Just having fun, man. It’s not a dig at anybody. It was about beating him and we did it, so why not have some fun with it?”

Harvick pledged $50,000 to the bounty in February and Gander RV CEO Marcus Lemonis added $50,000 to the pot, which Harvick said Tuesday morning would go to a COVID-19 relief effort of the winner’s choice. Elliott had talked with Harvick in the last few days, with both feeling a charity should get the money rather than the driver.

Making it even more intriguing, Elliott and Busch came into the race having won their most recent truck starts: Busch in February at Las Vegas and Elliott at Martinsville -- in April 2017.

“Originally when Kevin put the money up, I was more in it for the challenge and to be able to come out and try to run with Kyle,” Elliott said.

“He is really good. Any time you have a chance to come race him, you’re doing nothing but make yourself better.”

Driving for GMS Racing, Elliott took the lead with 24 laps remaining and held off Busch, whose night was filled with problems from broken rubbers in suspension pieces at the start to a pit strategy that had him coming in for his final set of tires later than the rest of the field, putting him 23rd with 27 laps remaining.

“Self-inflicted,” said Busch, whose truck team is the defending series owners champion. “Threw it away. We had six months to prepare and screwed it all up.”

Nothing irks Busch more than losing a race he thinks he should win. And to know he finished second in a truck he wasn’t happy with makes him know he could have finished one spot better.

A frustrated Busch didn’t see Elliott’s bow. But he kind of chuckled a little bit when told about it.

“Imitation is the strongest form of flattery – or something, I don’t know what [the saying] is,” Busch said. “Huh. That’s cute.”

Elliott probably wouldn’t use cute as his term for the night. It was rewarding, but he probably still feels the sting of two potential Cup wins in the previous six days slipping through his fingers in the final laps, including one last Wednesday at Darlington where Busch wrecked Elliott when Elliott was in second moments before the rains came. Then on Sunday, in the Coca-Cola 600 at Charlotte, Elliott was cruising to the win when the caution came out, he pitted and settled for second.

So at least he left the track feeling good.

“I knew it would be tough to come in and beat Kyle,” Elliott said. “He still does it more than most. ... It doesn’t make up for Sunday by any means, but it was a fun night.”

Get more from Gander RV & Outdoors Truck Series Add to your favorites to get information about games, news and more.
in this topic

NYC Marathon Canceled
The world's largest marathon was canceled Wednesday, only the second time the race will not take place since its origin.
June 24
those were the latest stories
Want to see more?
View All Stories
Fox Sports™ and © 2020 Fox Media LLC and Fox Sports Interactive Media, LLC. All rights reserved. Use of this website (including any and all parts and components) constitutes your acceptance of these Terms of Use and Updated Privacy Policy. Advertising Choices. Do Not Sell my Personal Info