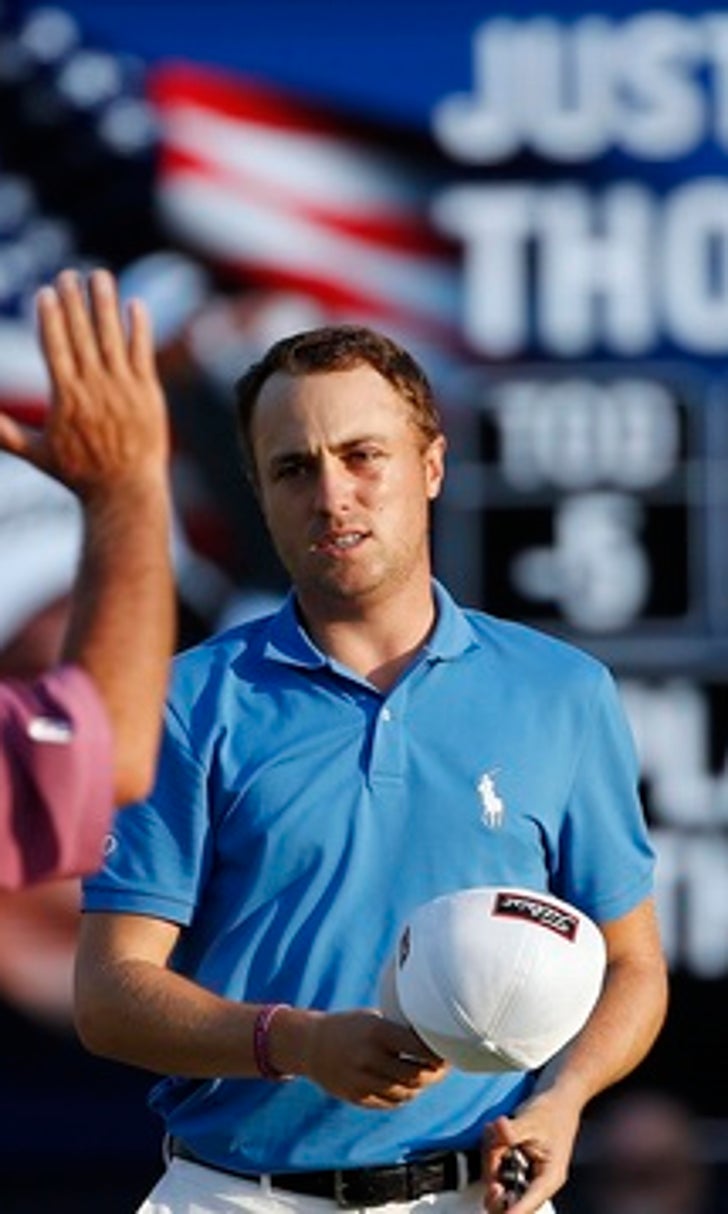 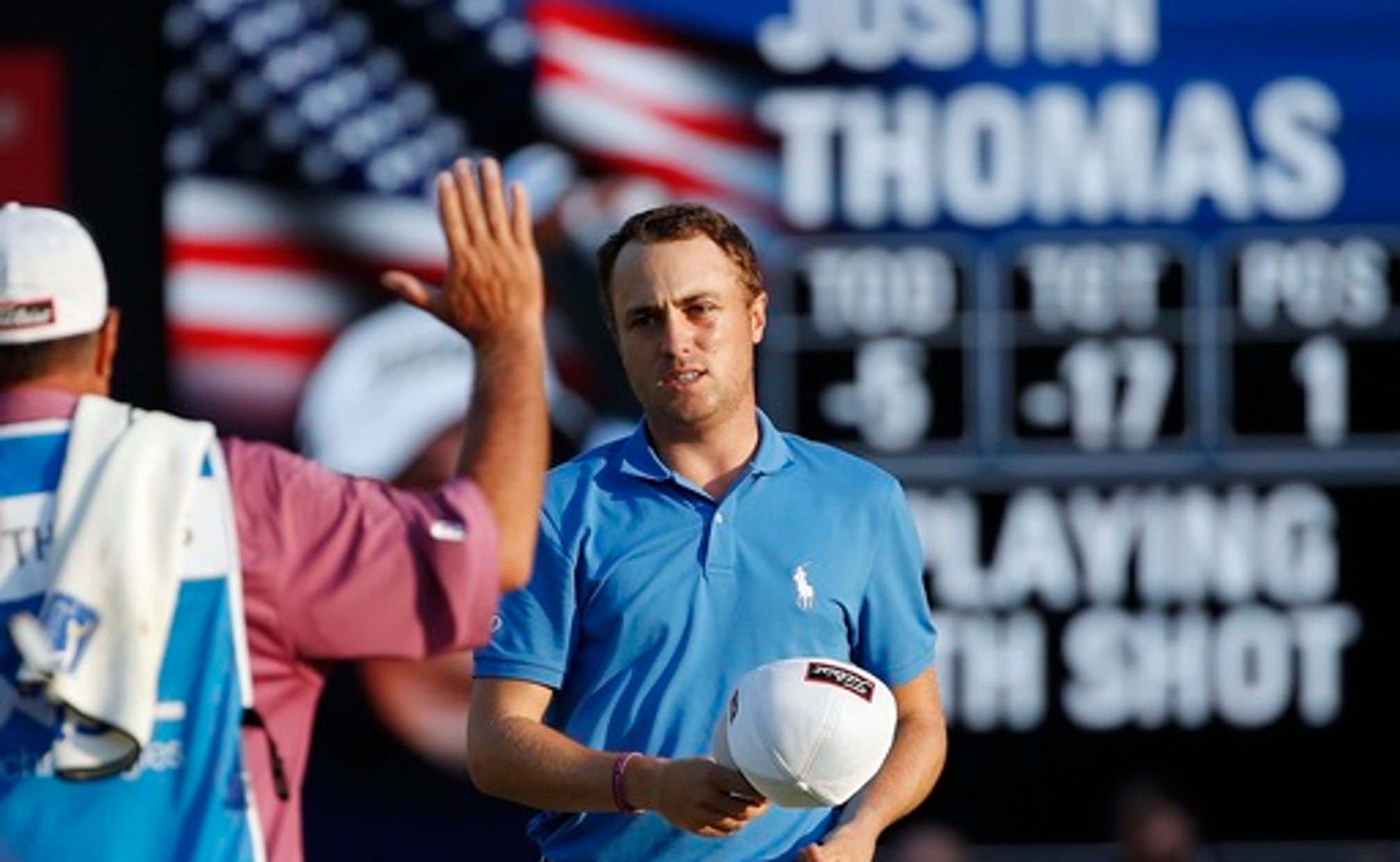 NORTON, Massachusetts (AP) Justin Thomas had an answer for everyone in the Dell Technologies Championship with just about every club.

He could tell from the cheers that Jordan Spieth was off to a good start. A glance at the leaderboard indicated it was better than he imagined - birdie-eagle-birdie. And then Thomas stood on the fourth tee and saw for himself.

Spieth rolled in a 4-foot birdie putt to go 5 under through four holes of the final round at the TPC Boston.

Concerned his driver would get up in the air and sail into trouble, Thomas hit a bullet with hopes it would roll into the bunker. It was better than that, flying fast into the shaggy collar atop the steep bunker and onto the fringe, where he rolled in a 30-foot eagle putt.

''That was a definitely a bonus,'' Thomas said.

The game was on. That eagle allowed him to catch Spieth and Marc Leishman, and Thomas didn't have to do much more on Monday.

Leishman faltered early on the back nine. Spieth lost his way in the middle. With two birdies and one clutch par save, Thomas closed with a 5-under 66 for a three-shot victory over Spieth that sent him into the off week feeling better than ever about his game, and his year.

''It was a great week because I felt like I didn't have my best stuff at the start of the week, and that's just something I've gotten so much better at,'' Thomas said.

Three weeks after he captured his first major at the PGA Championship, Thomas added another big title to a year filled with big moments. He won for the fifth time this season, the most of anyone on the PGA Tour. He moved up to No. 4 in the world.

And barring Spieth winning the final two FedEx Cup events to claim the $10 million bonus, Thomas became a heavy favorite to be voted PGA Tour player of the year.

Only he doesn't sound as though he's finished just yet.

''I have two events left. I have two more opportunities to win,'' Thomas said. ''And I'd love to make it six or seven wins.''

Spieth wasted that great start by missing the 14th green with a 5-iron for bogey. Needing an eagle to stay in the game on the par-5 18th, Spieth pushed a 4-iron into a tough lie in the bunker, blasted over the green and made bogey for a 67.

Spieth was runner-up for the second straight week in the FedEx Cup playoffs. He lost a three-shot lead to Dustin Johnson on Long Island. There wasn't much he could have done to stop Thomas, his best friend in golf since they were teenagers.

''Came out firing, like I said we had to do,'' Spieth said. ''Eight through 14 is the meat of the golf course. You want to get through even. I got through over par and didn't get any coming in when I hit some good putts.''

Spieth still moved to No. 1 in the FedEx Cup with one more event before the $10 million prize is decided at the Tour Championship.

Leishman shot 30 on the front to build a two-shot lead, only for it to vanish quickly. He had to save bogey on No. 10 after an errant drive. He three-putted from long range for bogey on the 11th. He found a bunker on the 12th for a third straight bogey. And then he closed with two bogeys that only cost him money. Leishman shot 70.

Johnson, the No. 1-ranked player in the world coming off his fourth victory of the season last week, started the final round three shots behind and was one of the few players who was never in contention. He took two to get out of a fairway bunker and made bogey on the par-5 second hole, and he closed with a 73 to finish 10 behind.

The PGA Tour heads into a dark week with Spieth, Thomas, Johnson, Hideki Matsuyama and Jon Rahm in the top five in the FedEx Cup. Next up is the BMW Championship north of Chicago for the top 70 in the standings, and from there the top 30 advance to the Tour Championship for a shot at the $10 million.

Thomas started the season at No. 34 in the world with one PGA Tour victory.

Now he's among the elite, joining Tiger Woods and Spieth as the only players in the last 50 years with five victories and a major in one season before age 25. Woods did it twice.

''I'm a lot better at golf,'' Thomas said. ''I think I'm stronger. I'm in better shape. I'm way more mentally tough. Things don't affect me as much. I'm still fiery. I still get angry. That's just my personality, my character; that will probably never change. But in terms of letting it roll over into the next shot, I think I'm way better at that.''