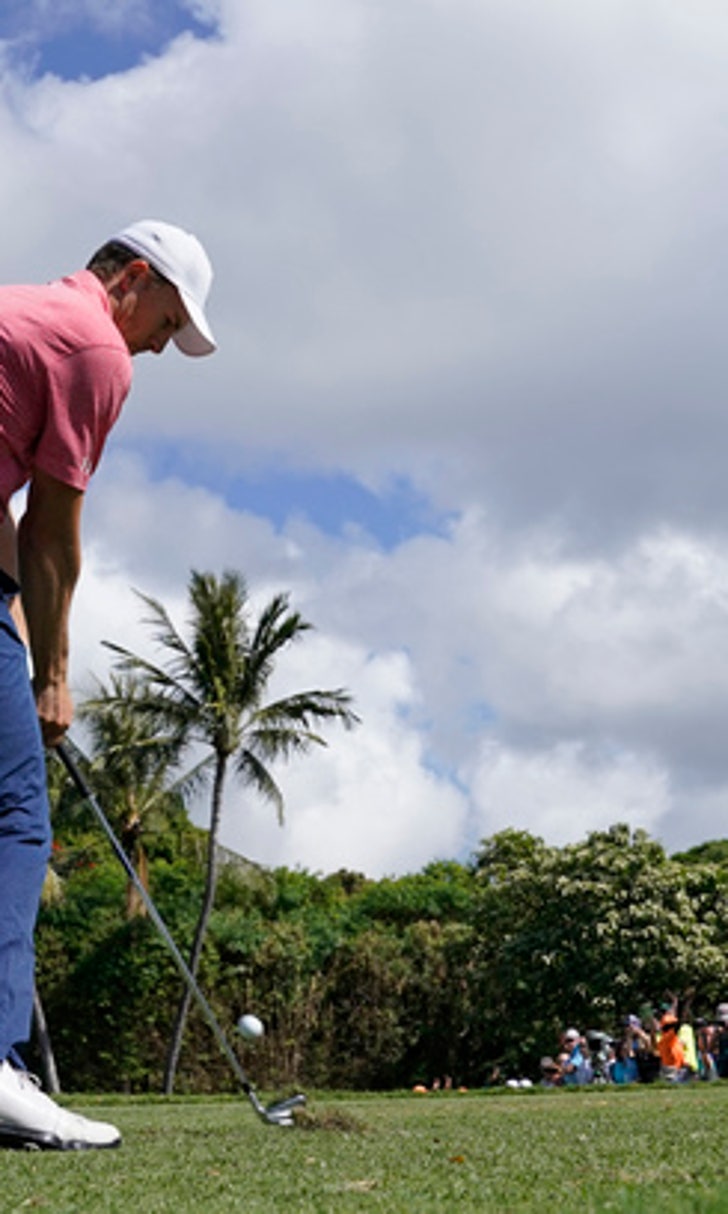 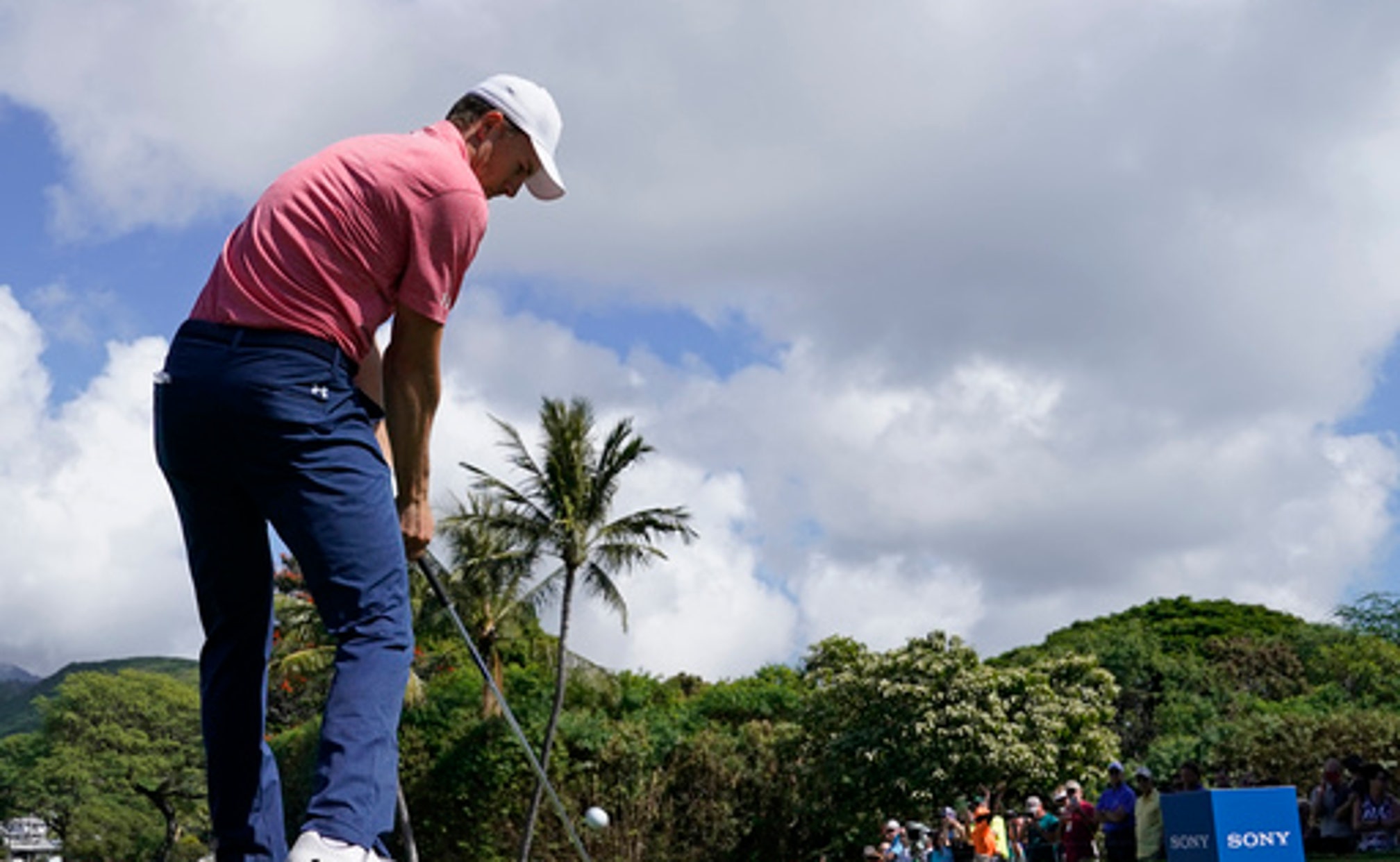 HONOLULU (AP) Jordan Spieth has played good golf in the opening round of the Sony Open each of the last two years and has little to show for it.

Both times, he wound up six shots out of the lead, for different reasons.

He opened with a 65 last year, a good score except when compared with another guy in his group - Justin Thomas - who shot a 59.

Spieth made eight birdies on Thursday and was still six shots behind, this time from one hole.

In Hawaii, no less.

He had to settle for a 69, thanks to a beautiful chip over the bunker to inches from the cup on his last hole at the par-5 ninth for a birdie. It left him closer to the cut line than to the co-leaders, Zach Johnson and Chris Kirk, who kept clean cards in their rounds of 7-under 63.

One shot off the tee led to the calamity.

''I'm looking for my best chance to make bogey,'' Spieth said to his caddie from the bottom of an 8-foot ditch as he surveyed his options.

There weren't many good ones.

To take a penalty drop where the ball entered the hazard meant playing his third shot with trees in front of him and nowhere to go.

His plan was to hit off the sand-packed bottom of the ditch toward the trees lining the fairway, and if it got caught up in the trees, it would at least leave him a shot at the putting surface. What he didn't plan on was the ball hitting a limb in just the right place that it sent back toward the ditch, a yard away from going back in.

For the third shot, he at least had a gap toward the green, except the ball came out high enough to hit another limb and carom hard to the left. At this point, he took a few steps forward and swung the club like a baseball bat, frustration setting in.

That left another tough shot - under the branches of the tree in front of him, and then over a 30-foot rounded tree in front of the green. He got the first part right, but it came down into the tree and - of course - bounced hard to the left, next to the base of another tree.

This made Spieth laugh, though he wasn't entirely amused.

From there, Spieth had no choice but to punch it into the gaping bunker in front of the green. With a thin lie in the sand, he blasted out to 30 feet.

Two putts later, he had an 8 and was back to even par.

Spieth, who hit into a fairway bunker on the par-5 ninth, stood for the longest time with his arms folded across his chest, a quiet look that belied the roiling frustration of letting such a good round get away from him.

He had no comment after his round. A PGA Tour media staffer asked him if he'd like to speak to reporters and Spieth offered a firm but polite, ''No thank you.''

Spieth then signed autographs for some 15 minutes and left.

It could have been worse. Kevin Na once took a 16 on the par-4 ninth hole at the Valero Texas Open in 2011, which included going back to the tee, having one shot that hit him and spending more time than he wanted in the thicket with nowhere to go.

John Daly had a similar moment - there have been a lot of moments with Daly - at the Valspar Championship in 2013 when his second shot hit a tree and went back into the bushes. He took a swing. He took a penalty drop. He hit another tree, tried another shot, took another penalty drop.

Spieth's 8 still beats by one shot the 9 that Justin Thomas made from the hay right of the sixth fairway at Royal Birkdale last summer. That was the second 9 Thomas made in 2017, and the year turned out pretty good for the FedEx Cup champion and PGA Tour player of the year.

Kirk arrived on Oahu a week ago and was reminded how rusty he was when he reached into his bag for some light practice at Ko Olina and found golf balls that he had marked for the final round of the RSM Classic nearly two months ago.

He shook off enough rust to birdie three of his last four holes for a 63. This is the second straight tournament for Kirk to have at least a share of the first-round lead. He tied for fourth in the last one.

Johnson didn't have the vacation he wanted. Two days after Christmas, he came down with the flu and stayed in bed. He didn't leave the house for six days, and instead of going to the Big Island, he figured he was in no shape for extra travel or fun. He had weak legs and a sore back when he tried to practice, and didn't get back to normal until Wednesday. And then he shot a 63. So he's feeling fine.

Justin Thomas went to Alabama. Kevin Kisner went to Georgia. The bet on the college football final was the loser would have to wear the winning team's jersey on the 17th hole of the opening round.

Kisner slipped on a Crimson Tide jersey from the tee until he reached the green. It's bad enough that he wanted 3+ points from Thomas (Final score: Alabama 26, Georgia 23). He also made bogey on the hole.

But all is well. Both signed the jersey and Kisner will auction it off for charity.