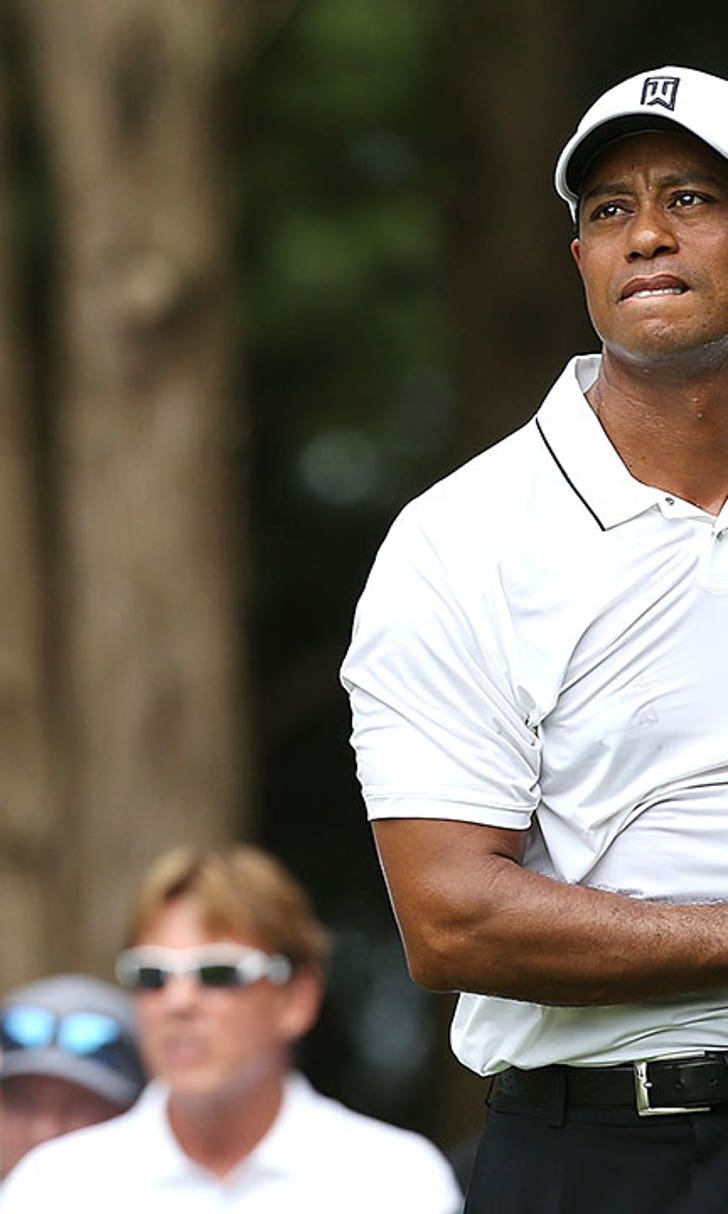 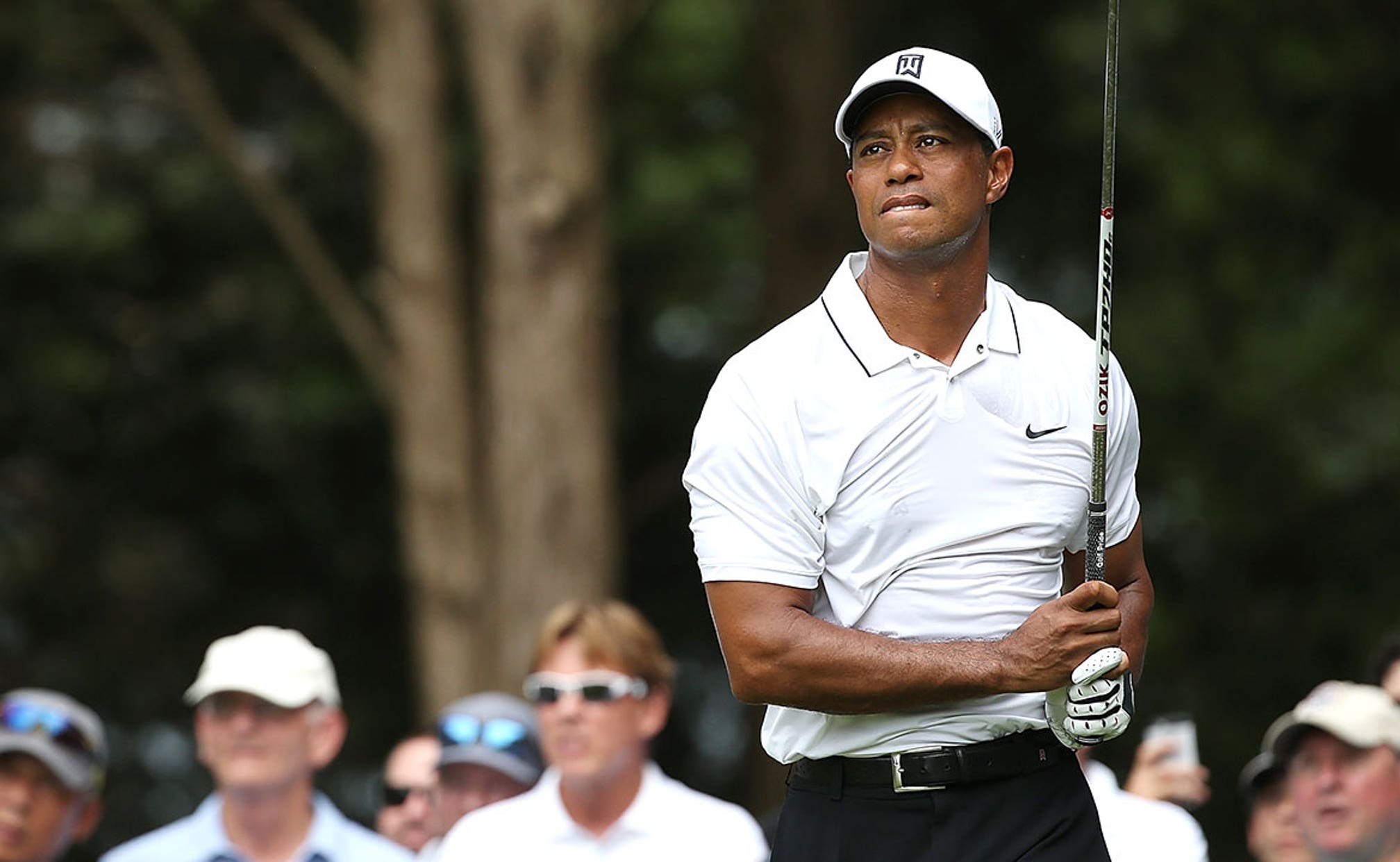 After bogey-filled start, Woods turns it around for first-round 68 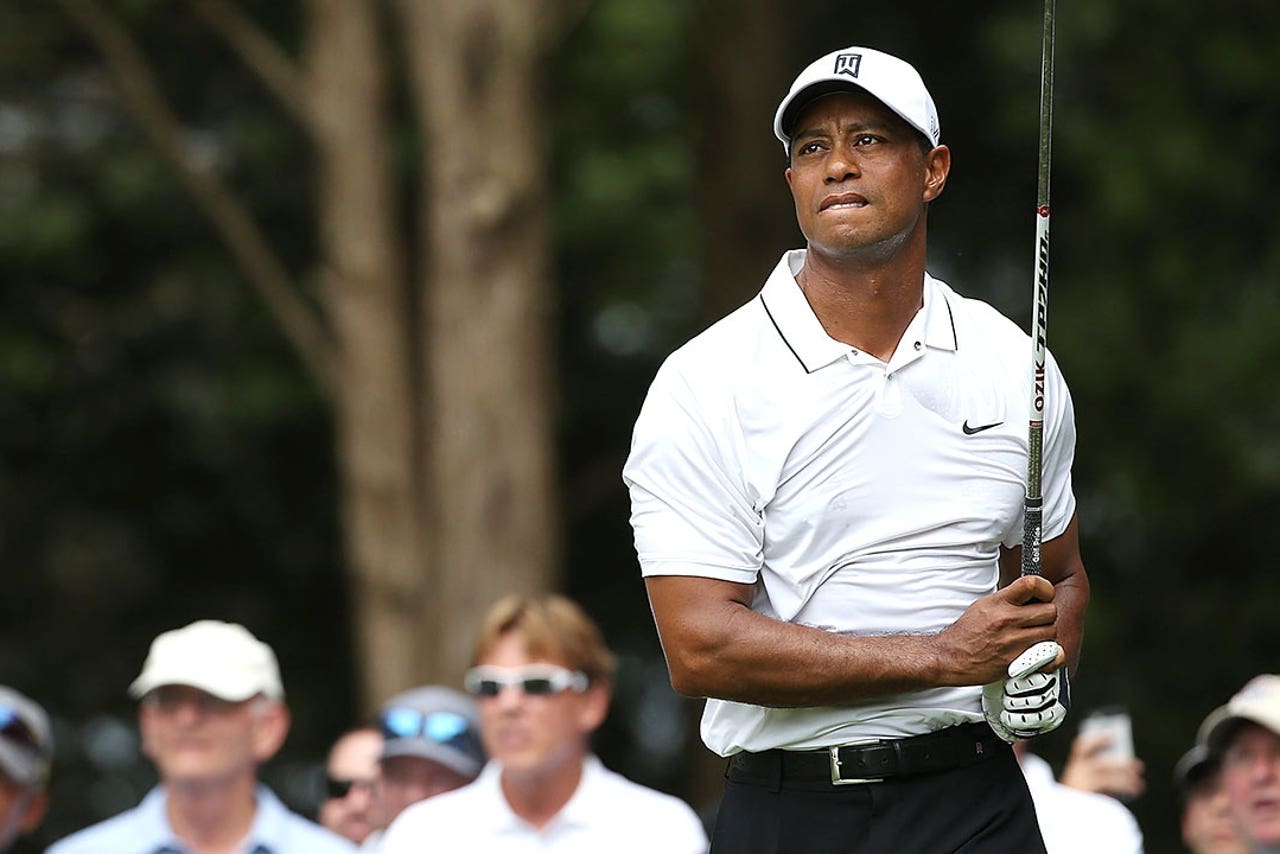 Tiger Woods took a conservative 3-wood off the first hole Thursday in the Quicken Loans National when many players were hitting driver. No matter — he still pull-hooked it into the gallery, hit his second shot into a greenside bunker and lipped out a 5-footer for par before slamming his putter against his bag.

On the third hole, he missed the green well left and had to get up-and-down for bogey. A three-putt on No. 4 left him 3 over.

It was his final bogey of the day.

Woods got a fortunate deflection off a marshal left of the green on the par-5 fifth. He apologized, handed out an autographed glove and made his first birdie. Then he ran off five birdies in six holes around the turn for a 3-under 68. That left him five shots behind leaders Retief Goosen and Ryo Ishikawa at Robert Trent Jones Golf Club.

Woods said it was the first time since the Masters in April that he's turned a bad round into a good one.

"That's what scoring is all about," Woods said. "I made a lot of key putts today. I ran them by the hole but I made all the comebacks, and overall I felt like I hit the ball well enough to turn it around. It was nice to actually turn it around."

Woods is the host of the Quicken Loans National, which he won in 2009 and 2012 at Congressional in Maryland. The last of his 79 PGA Tour victories was nearly two years ago, and he has plummeted to 266th in the world.

Woods got up-and-down from a greenside bunker for birdie on the par-5 eighth. He made a 9-footer on 10 and a 7-footer on 11. He hit his approach to tap-in range on 12, the most difficult hole on the course, and ended the run with a 12-footer on 13. He two-putted for par on the final five holes.

The 68 was only his sixth round under 70 this year. He has had three scores of 80 or higher and has missed three cuts and withdrawn once in eight events.

In soft conditions with little wind, Woods' 68 was only good for a tie for 27th. Players were allowed to lift, clean and place their golf balls on the rain-softened fairways, and 81 of them managed to break par.

"We got the fresh greens tomorrow," said Woods, who played in the afternoon after a 95-minute rain delay. "Hopefully, go out there and post a low one."

RTJ is welcoming a regular PGA Tour event for the first time after hosting four Presidents Cups, most recently in 2005, and experience seemed to help. Goosen, who played in two of those events, had a bogey-free 63. Presidents Cup veterans Ernie Els and Justin Leonard were one shot back, along with Kevin Chappell.

Goosen, a 46-year-old two-time major champion, is finally feeling healthy after major back surgery in 2012. Always stoic on the course, he still has plenty of passion for the game, which he showed by qualifying for both the U.S. Open and the British Open.

"I'm lucky to be out here. Three, four years ago my career looked like it was at an end," said Goosen, whose last victory was in 2009. "I'm just glad I'm still out there and playing. Yeah, I just wish I was 10 years younger again."

Ishikawa, who started on the back nine, ran off six birdies in a row starting on the 14th hole. Then he made a hole-in-one on the 180-yard fourth, spinning an 8-iron 15 feet back into the cup for his first competitive ace in the United States.

At that point he was 8 under with five holes to go. He parred the last five.

"It took about two holes to make myself calm," he said. "No. 5 was a par 5, like a birdie hole, but it was kind of difficult for me to make a par right there."

Defending champion Justin Rose, the highest-ranked player in the field, was three shots back. So was Ollie Schneiderjans, making his second professional start.

Rickie Fowler also made an ace, kicking a 7-iron off the fringe and into the cup on the 184-yard ninth, his final hole of the day. He was four shots back after a 67 that could have been much better.

Fowler said his putter went cold after his victory at the Scottish Open, and on Thursday he missed four birdie putts from inside 15 feet in a five-hole stretch. Three of his four birdies were from inside 4 feet. Honoring a club golf tradition, he bought beer for the media to toast his hole-in-one.

"I hit a great shot. Get a little bit of a good kick. Hey, we'll take it," Fowler said. "Looking forward to getting back out tomorrow and see if we can get some putts to go."