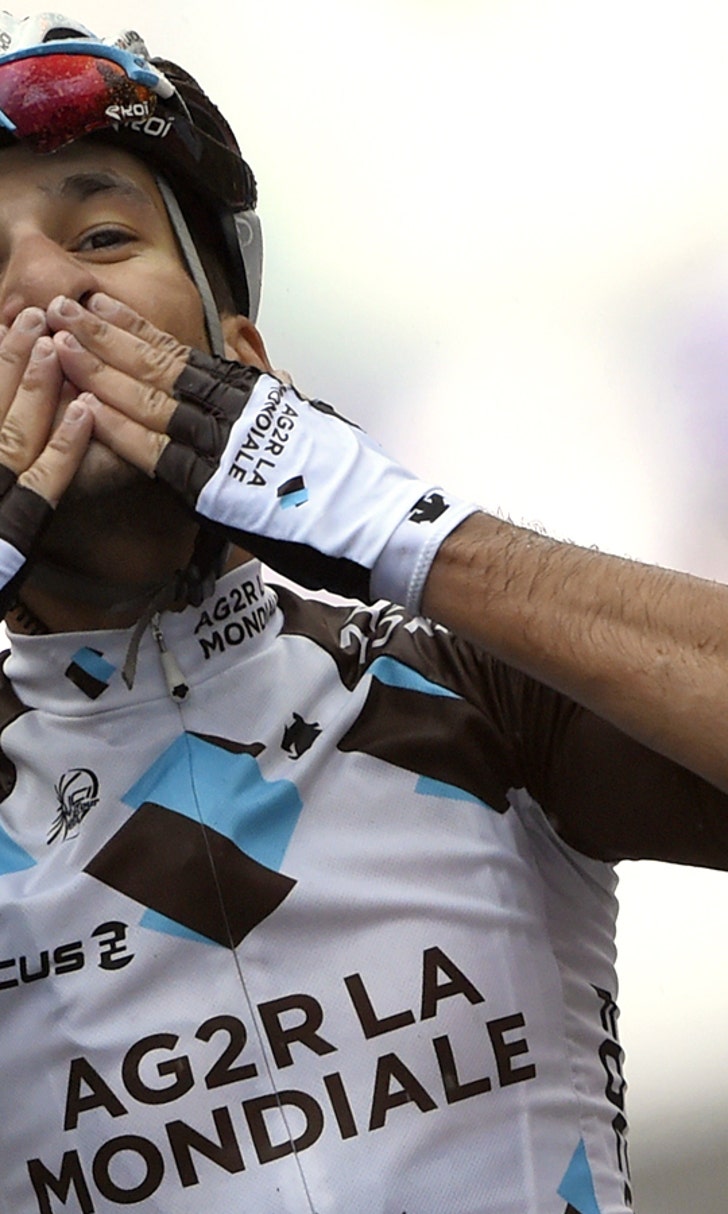 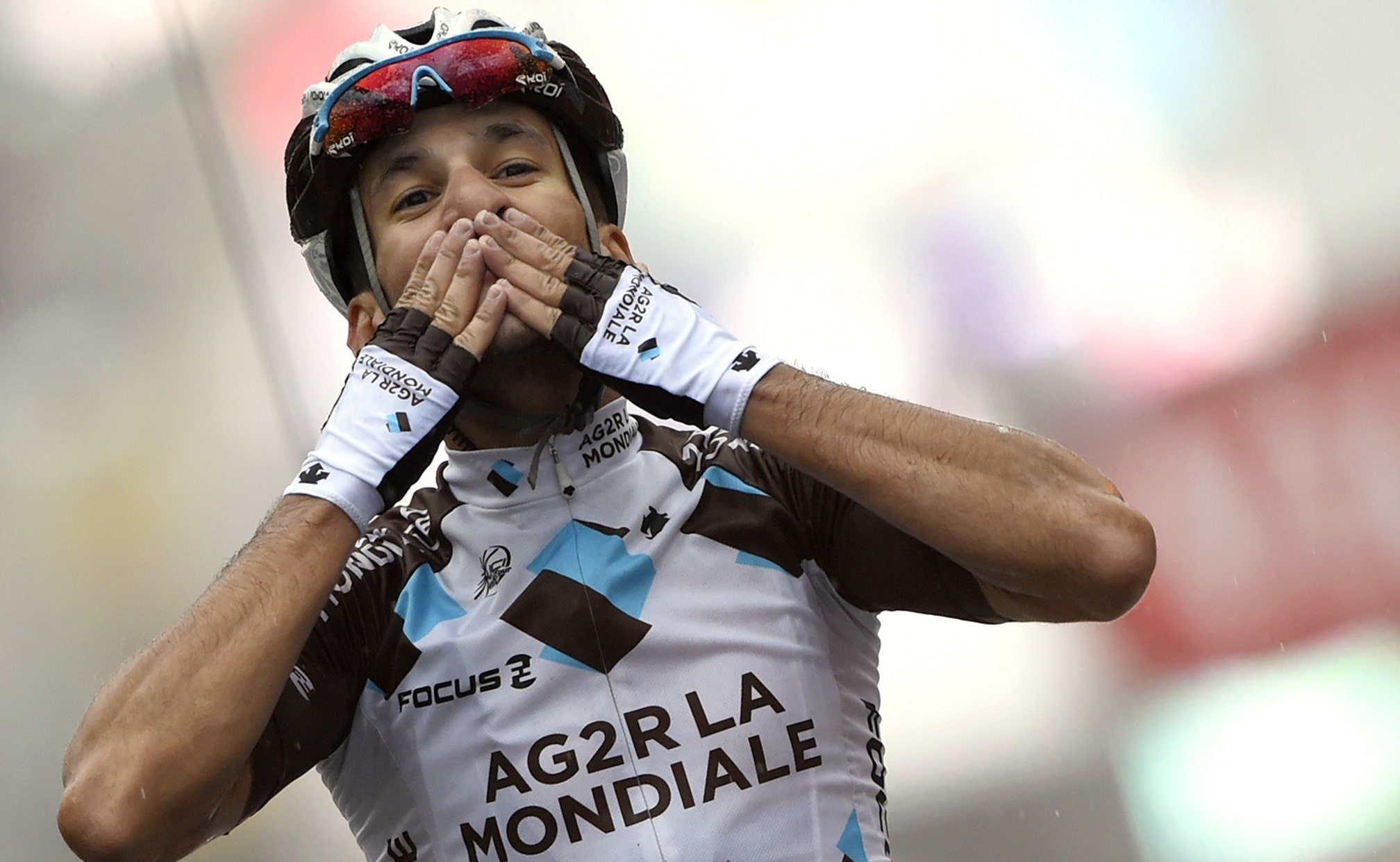 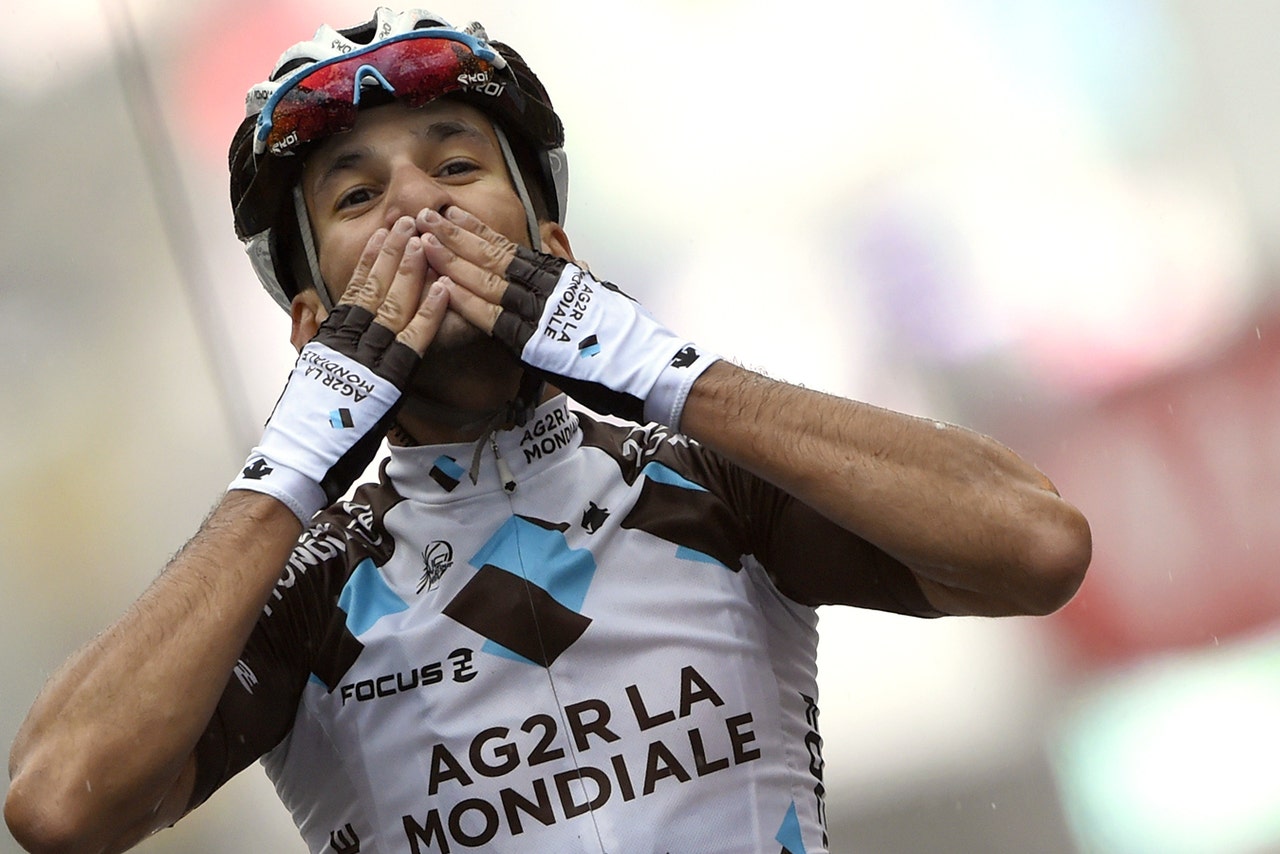 GERARDMER, France -- In a solo breakaway, Blel Kadri gave France its first stage winner at the Tour de France in the entree to the Vosges mountains on Saturday.

Meanwhile, Vincent Nibali extended his lead over his biggest rivals except an important one: Two-time champion Alberto Contador.

Over two minutes back, an attacking Contador dueled with Nibali to capture second place at the uphill finish of a rainy 161-kilometer (100-mile) ride from Tomblaine to Gerardmer La Mauselaine ski resort. Contador gained only seconds on Nibali, and was still 2 1/2 minutes behind him, but the threat was loud and clear.

The overall standings changed after Stage 8, with mostly strong climbers at the top.

Kadri, sensing his looming victory in the last kilometer, clasped hands in joy with a staffer of his AG2R Mondiale team, who was alongside him in a team car. He kissed his fingers to the crowd and smiled broadly at the line.

"Today was my day, and I'm really, really, really happy," he said after his maiden Tour stage win. "We work all year for good performances in this race. ... Today it paid off."

Kadri emerged from a five-man breakaway that chiseled out a lead of as many as 11 minutes. None of the breakaway riders threatened Nibali's yellow jersey: The highest-placed among them started the stage nearly 26 1/2 minutes back.

Contador attacked as he and Nibali passed under the red flag marking one kilometer to go. But the Italian couldn't be shaken -- hewing right on the Spaniard's back wheel except for Contador's final surge at the line.

"I'm not explosive, but I held my own," Nibali said. "I tried to respond as best I could to his attack ... he moved a lot, I really wanted to stick close to him ... in the last 100 meters he accelerated a lot."

The ride featured three mid-grade climbs in the first of three days in the mid-sized Vosges range near the German border.

American Andrew Talansky had trouble and lost time in the title chase to other contenders. In the final ascent, he skidded off the wet road and fumbled -- with help from a fan -- to repair what seemed to be a problem with his bike. A race medical report said he had multiple contusions.

Talansky, the Garmin-Sharp team leader, finished more than two minutes behind Nibali and Contador, and trailed the leader by 4 minutes, 22 seconds in 16th place overall. He started the ride in eighth, 2:05 down.

Overall, Nibali led Astana teammate Jakob Fuglsang of Denmark in second by 1 minute, 44 seconds. Australia's Richie Porte of Team Sky, who finished fourth on Saturday, was 1:58 back in third. Spain's Alejandro Valverde was fifth, 2:27 adrift, and Contador was sixth, 2:34 behind.

The breakaway five chiseled out their maximum lead with about 50 kilometers (30 miles) left, and the pack began to accelerate. With around 25 kilometers left, the lead dwindled to 4 1/2 minutes. France's Sylvain Chavanel pressed the pace among the five in front, then Kadri overtook him, pedaling alone up the final climb.

There were fewer crashes than in recent days. Before the stage, Swiss rider Mathias Frank, the leader of the IAM Cycling team, withdraw because of broken left femur in a crash on Friday. Frank, who was runner-up in the Tour de Suisse last month, underwent surgery in Geneva on Saturday.

The toughest ride in the Vosges will come on Monday when cyclists face seven ascents, including an uphill finish to the storied ski resort La Planche des Belles Filles. The pack faces six ascents on Sunday with a 170-kilometer (106-mile) ride from Gerardmer to Mulhouse.