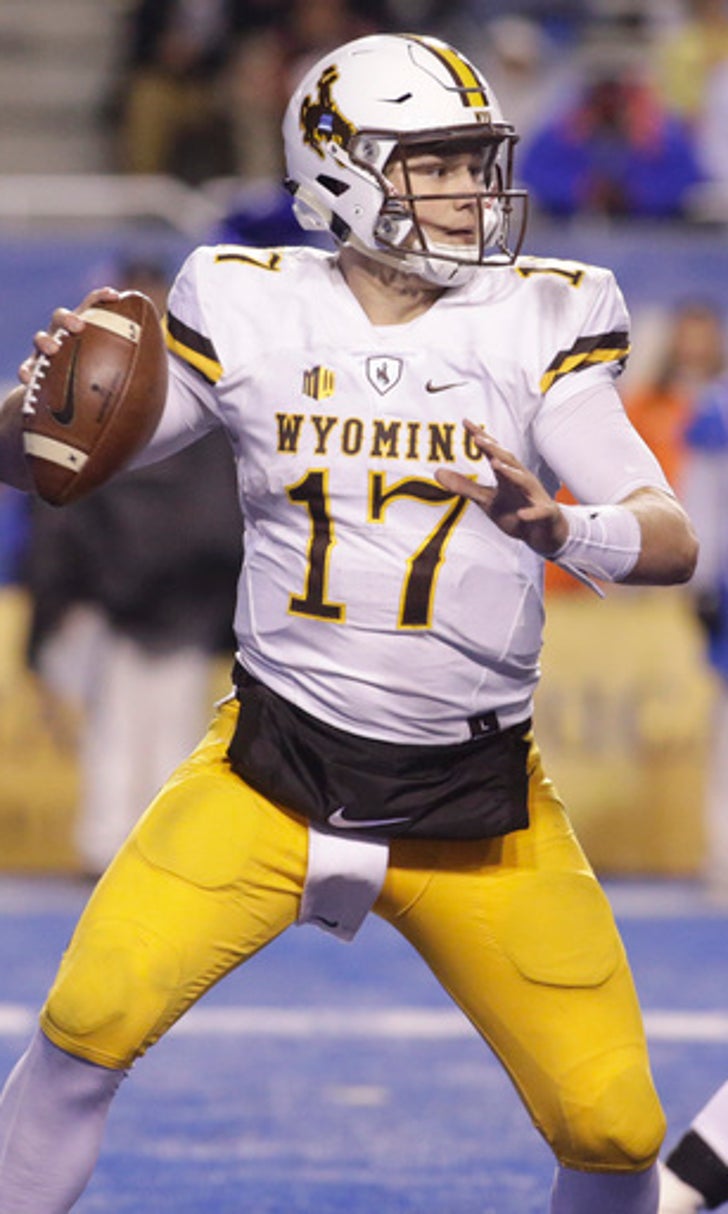 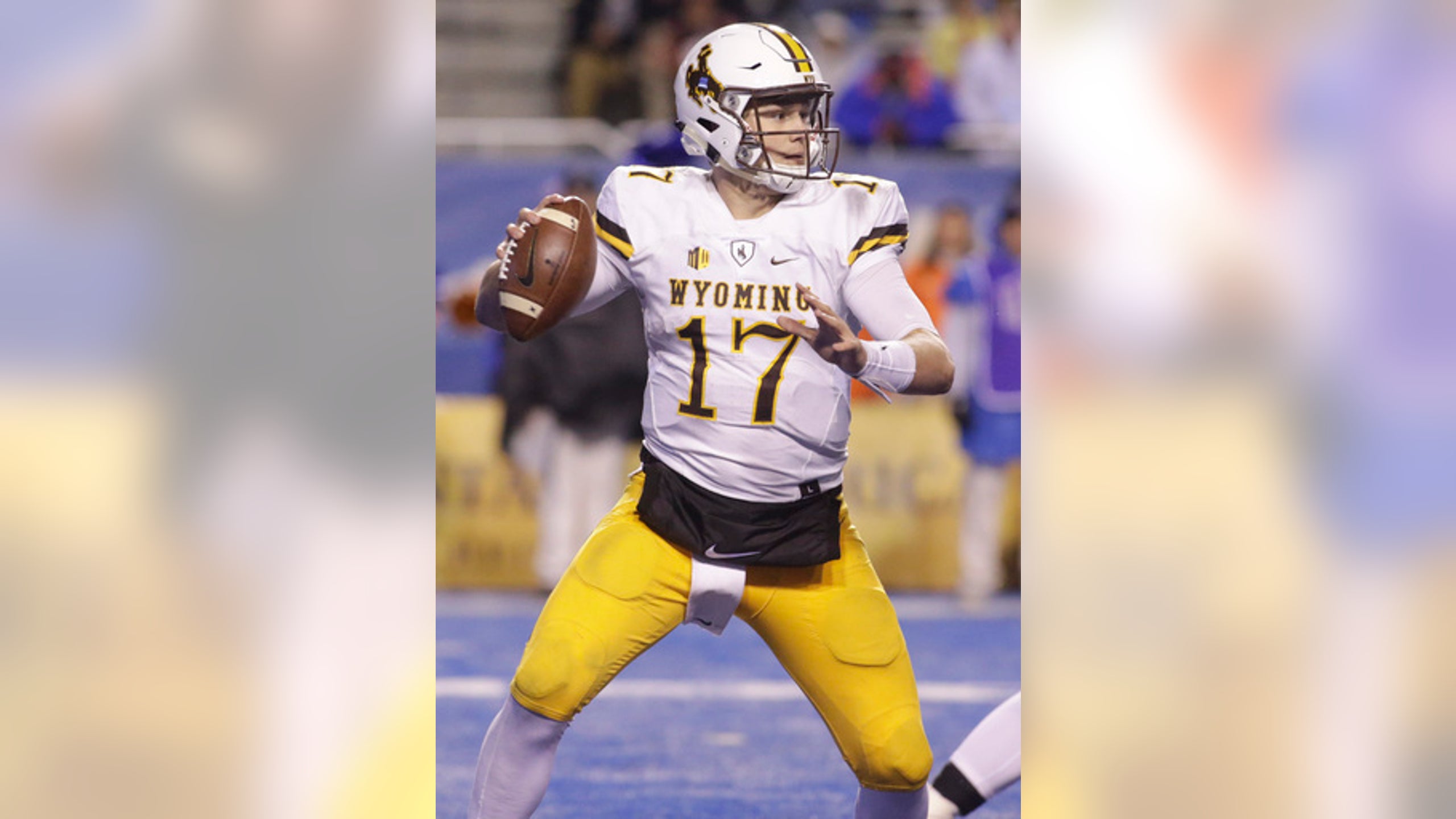 BOISE, Idaho (AP) When Wyoming junior quarterback Josh Allen stepped onto the stage to accept his MVP trophy following the Cowboys' 37-14 victory over Central Michigan on Friday in the Famous Idaho Potato Bowl, it didn't take long for the chant to begin.

''Do it! Do it!'' Wyoming players shouted in unison as snow began to fall on the field.

Surrounded by teammates and a throng of Wyoming fans, Allen couldn't resist the moment and hoisted the trophy over his head before declaring his intentions to skip his senior season to enter the NFL draft.

''I was hoping to spend at least a day or two thinking about it,'' Allen said, ''but I think my teammates knew, and they were chanting for me to do it. This was the idea the whole time, to come back and trust what Coach (Craig) Bohl was doing and learn more on the offensive side of the football. It wasn't pre-planned before the season started, but we had a pretty good idea of what we were going to do.''

Allen missed the final two regular-season games with a sprained right shoulder, resulting in a pair of close losses. In warmups, he looked anxious to return to the field and didn't disappoint the Wyoming contingent on hand for his final collegiate game.

''Sitting out for those two games killed me inside,'' Allen said. ''I wanted to be back on the field with my teammates and brothers.''

Allen completed 11 of 19 passed for 154 yards and three touchdowns without an interception. He didn't have to do much thanks to Wyoming's suffocating defense. But when the Cowboys needed Allen, he produced.

Allen's first touchdown pass to open the scoring was a 23-yard bullet to Jared Scott. But the potential top 10 draft pick showed off the arm strength and accuracy that has scouts drooling with a 45-yard strike that hit C.J. Johnson in stride in the end zone.

''In today's world where players are making all kinds of decisions about bowl games, Josh chose to play and I applaud him for that,'' Bohl said before lobbying for Allen to be drafted. ''If there's any NFL team looking for a player out there, you're never going to find a bigger competitor and a better leader than him.''

However, Allen's performance didn't have to be all that impressive thanks to a defense that forced eight turnovers.

''I don't feel that today's performance was indicative of the type of team we have,'' Central Michigan coach John Bonamego said. ''The storyline obviously is eight turnovers. You're not going to win many football games against any decent opponent turning it over that many times.''

Wyoming entered the game first in the nation in turnover margin, but second in forced turnovers with 30 behind Central Michigan, which had 31. But with an 8-0 advantage, Wyoming will likely finish at the top of both rankings after the bowl season concludes.

Wyoming took a 21-7 lead in the first quarter.

Wyoming's offense struggled in the red zone after the first quarter, settling for three field goals in three trips.

Central Michigan struggled everywhere on the field, watching promising drives end on turnovers or other drives stunted due to Wyoming's relentless pass rush. The Cowboys had a season-high five sacks.

Late in the third quarter, Central Michigan found a spark and cut the deficit to 30-14. The Chippewas strung together a seven-play, 65-yard drive that ended on a 3-yard run by Jonathan Ward.

But Central Michigan failed to build on that momentum, losing it all on a scoop and score. After a strip sack by Youhanna Ghaifan, Wyoming defensive end Carl Granderson took the fumble and rumbled 58 yards for the touchdowns.

''This defense is special,'' Ghaifan said. ''We all do our jobs and do it exceptionally well. ... We got eight turnovers today-that's not too shabby.''

Wyoming: Finding a replacement for Allen will be a high priority for a Cowboys team that is losing only three starters on offense and three on defense. Wyoming returns leading rusher Trey Woods and a stout defense that should give the Cowboys a strong chance to contend for the Mountain West Conference title.

Central Michigan: The Chippewas face a rebuilding season next year in the MAC as they lose seven starters on offense and five on defense. The offense is a mix of good and bad. The bad? They lose starting quarterback Shane Morris along with his top two receivers, Mark Chapman and Corey Willis. However, the top three rushers-Jonathan Ward, Kumehnnu Gwilly, and Romello Ross-all return.

The team wore helmet stickers with Enberg's ''Oh My!'' signature call, while coaches wrote the phrase on the back of their caps.

Enberg graduated from Central Michigan in 1957 and played baseball for the Chippewas.

Central Michigan will open the 2018 season on Sept. 1 at Kentucky.