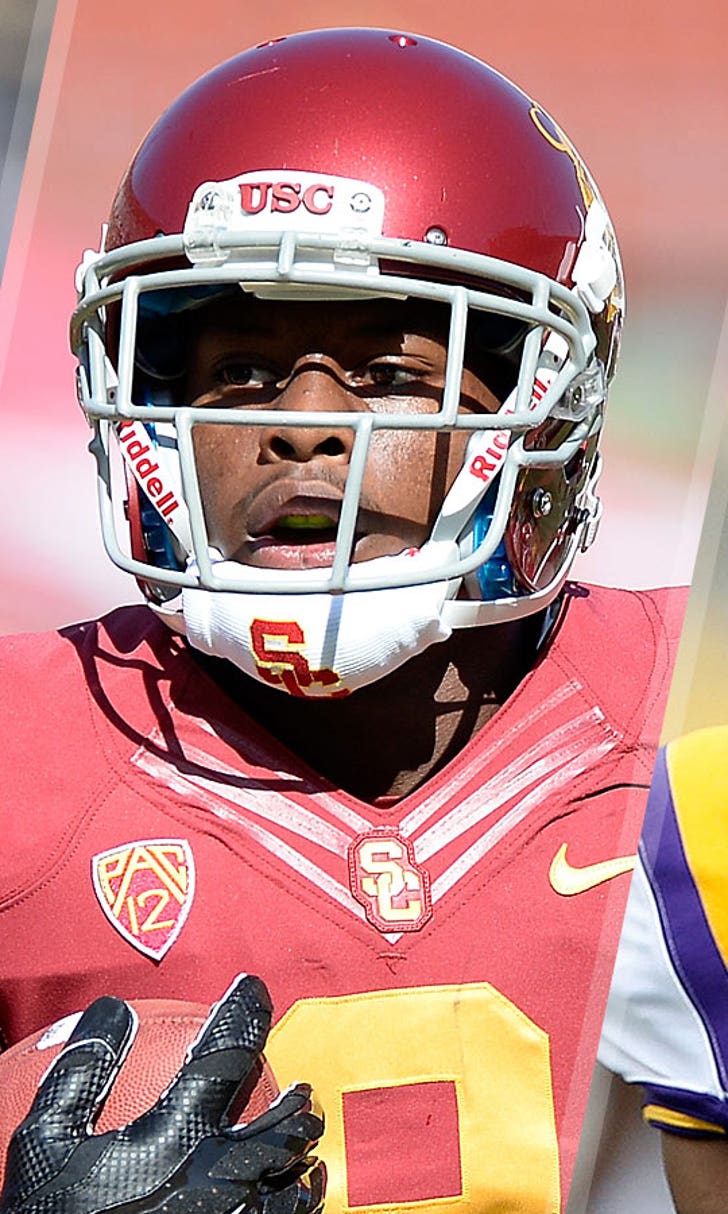 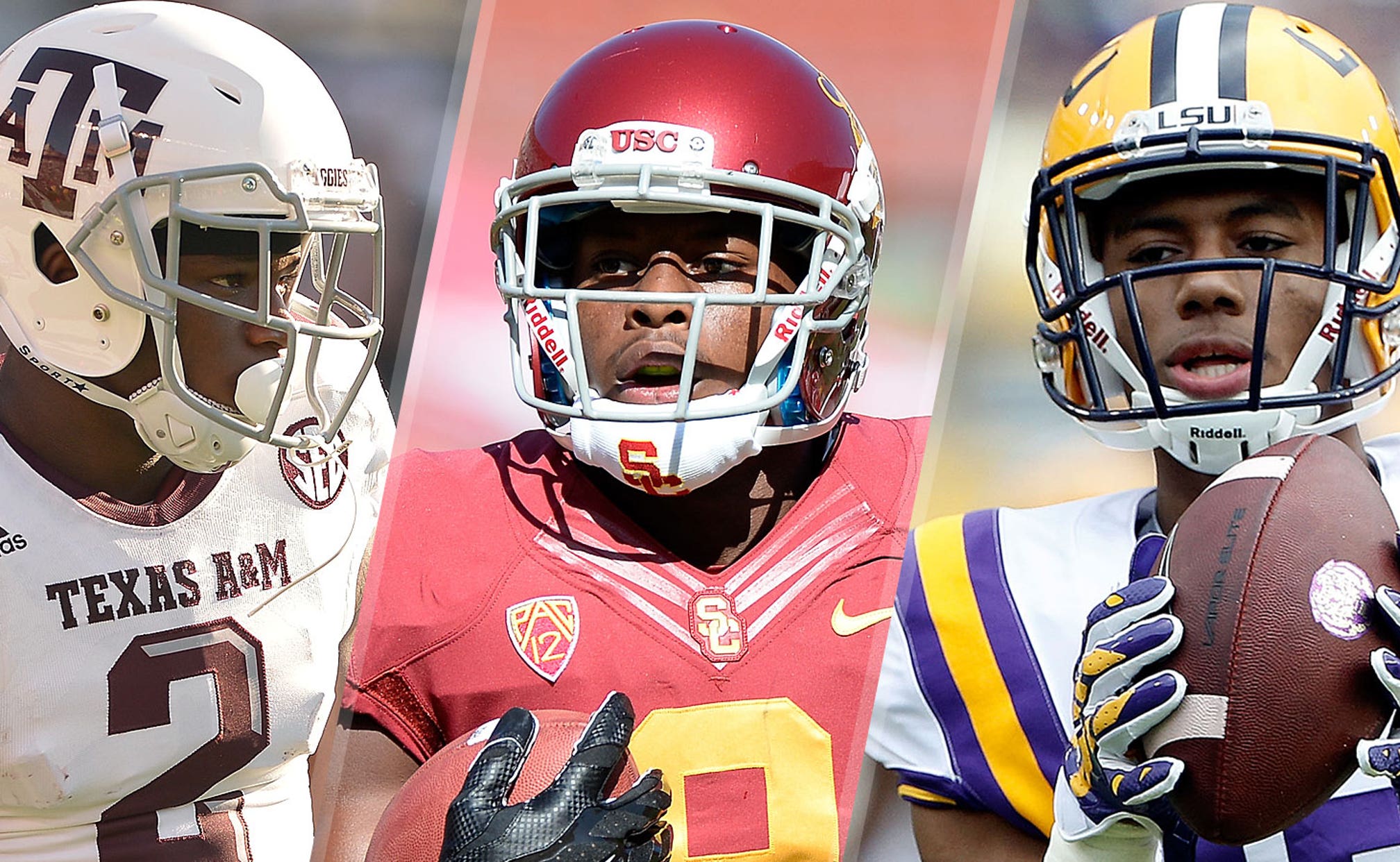 The top 24 wide receivers ready for monster seasons in 2015 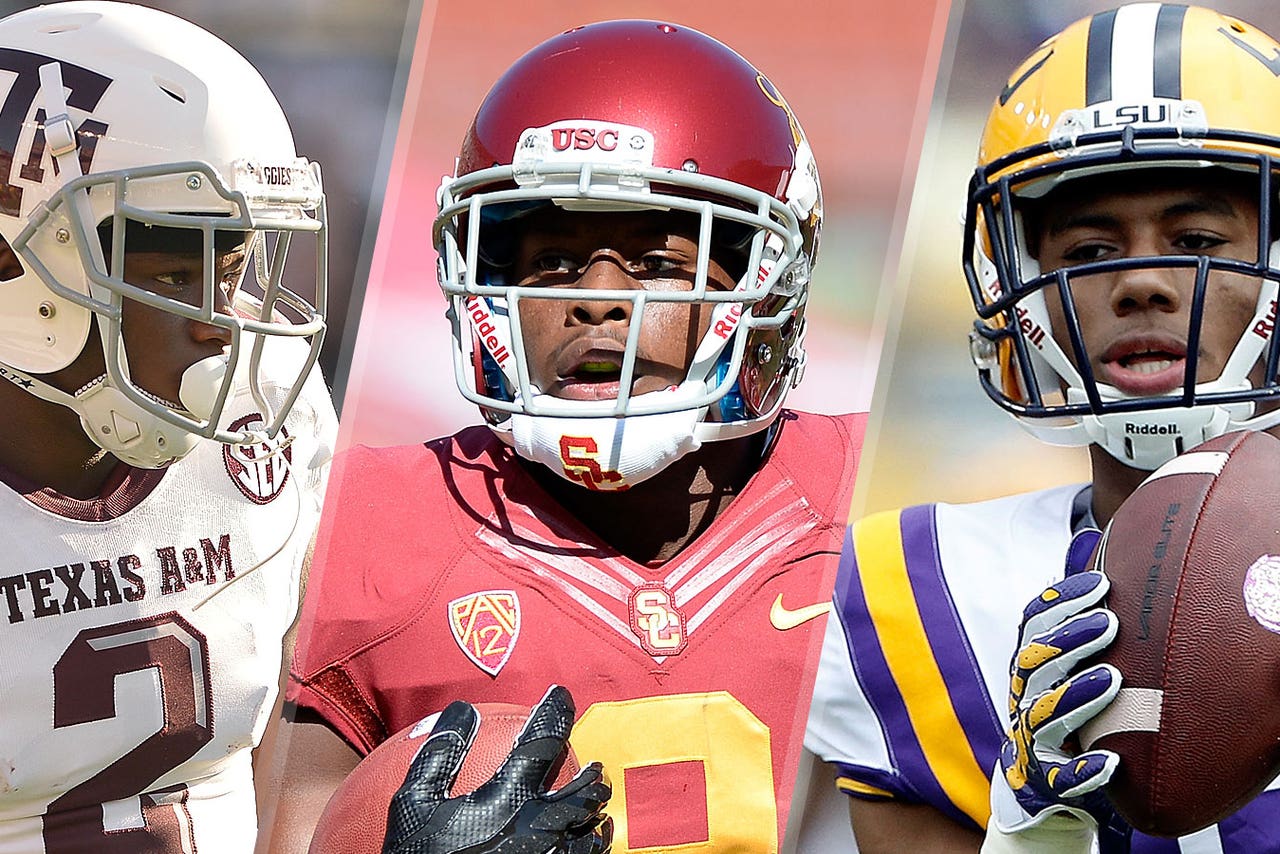 More from Athlon Sports: Alabama is ready for another title run / Florida could win SEC East in 2015 /Tennessee is ready to make an SEC title run / South Carolina needs to step up in 2015 / Will Ohio State repeat as national champions?

College Football's spring practice session is underway, and all 128 teams and coaches are getting their first glimpse at how their depth chart is shaping up for the 2015 season. And with teams hitting the practice fields, it's the first chance to take a look at which players are ready to take the next step in their development and emerge as a key contributor.

After taking a look at the quarterbacks and running backs on the rise for 2015, let's finish the offensive side of the ball with the wide receiver position. There's no shortage of receivers or breakout candidates at this position, but the list is headlined by USC's JuJu Smith, Florida State's Travis Rudolph, Virginia Tech's Isaiah Ford and Ohio State's Jalin Marshall.

Here are 24 wide receivers to watch who could have big seasons this fall.

Note: Players considered for the on-the-rise designation had fewer than 1,000 receiving yards in 2014.

If LSU gets any consistency from its quarterbacks in 2015, then it's safe to assume Dupre will have a breakout campaign. The Louisiana native was the No. 17 overall recruit in the 2014 247 Sports composite rankings and showed his big-play ability as a freshman by averaging 22.7 yards per catch on 14 receptions. Additionally, five of Dupre's catches went for touchdowns.

In his true freshman campaign, Ford emerged as Virginia Tech's top receiver. In 13 contests, Ford grabbed 56 receptions for 709 yards and six scores. He recorded only one performance of 100 yards (Georgia Tech) but averaged 4.3 receptions per game, which ranked ninth among receivers in the ACC. With more consistency from quarterback Michael Brewer and another year to work in the offensive scheme, Ford should only improve on his totals in 2015.

The Nittany Lions are loaded with promising young talent at receiver, with Hamilton and Lewis the group's leading statistical options last season. Hamilton led the team with 82 catches for 899 yards, while Lewis ranked second with 55 receptions for 751 yards. Assuming Penn State can protect quarterback Christian Hackenberg in 2015, the passing attack should take a step forward, allowing Hamilton and Lewis to increase their production and opportunities.

Let's group all three of California's top returning receivers here, as the Golden Bears should have one of the nation's top passing attacks in 2015. Quarterback Jared Goff returns after throwing for 3,973 yards last season, and the talented trio of Lawler, Anderson and Treggs is due for an increase in opportunities after Chris Harper left for the NFL. With a defense that is still rebuilding, California will have to win with its offense in 2015. Keep an eye on this receiving trio, as it's a safe bet at least one player will earn All-Pac-12 honors this year.

Marshall and Dontre Wilson manned Ohio State's H-Back position last season, and with the departure of Devin Smith, Evan Spencer and tight end Jeff Heuerman, both players should see an increased role in the offense in 2015. Marshall finished 2014 with 38 receptions for 499 yards and six scores and added 145 yards and one touchdown on the ground. Three of Marshall's touchdowns came in one game, but he grabbed 24 of his 38 receptions over the final six contests. 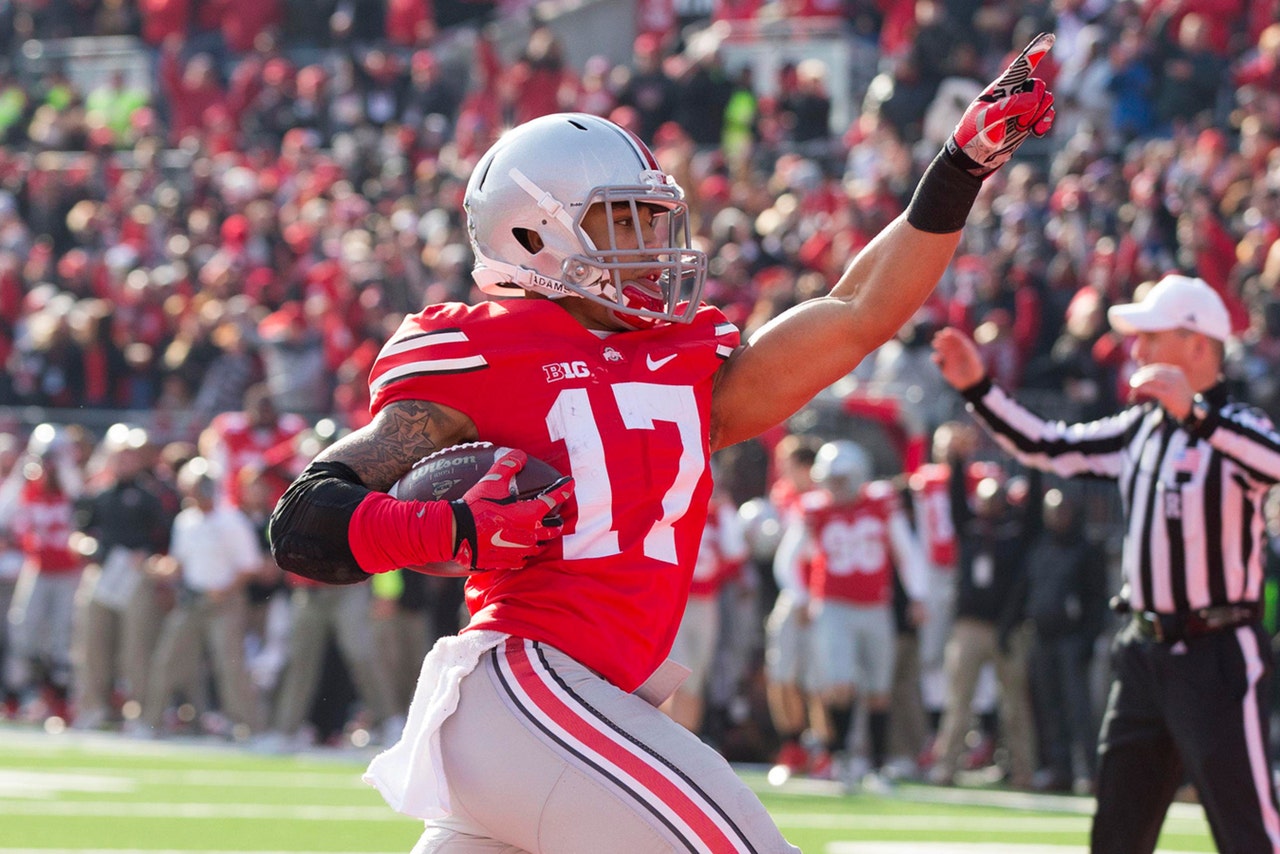 The Thundering Herd enters spring with a few holes to fill on offense, as quarterback Rakeem Cato and top receiver Tommy Shuler expired their eligibility after the Boca Raton Bowl. While the quarterback battle could extend into the fall, the receiving corps could find its next go-to receiver in McManus this spring. As a redshirt freshman last year, the Maryland native caught 26 passes for 422 yards and six scores.

The Aggies have one of the nation's top receiving corps in 2015, and this group could get even deeper if Noil and Ricky Seals-Jones take the next step in their development. Noil caught 46 passes for 583 yards and five scores in his first season in College Station. In addition to his receiving totals, Noil averaged nearly 24 yards per kickoff return and 12 yards on punt returns. The sophomore should be one of the SEC's top all-around playmakers in 2015.

Bowling Green coach Dino Babers is a former Baylor assistant, and his "Falcon Fast" offense is similar to the one he learned under coach Art Briles in Waco. Rhodes is eligible in 2015 after sitting out 2014 due to NCAA transfer rules, and the sophomore should be an instant-impact performer for the Falcons. As a freshman at Baylor in 2013, Rhodes caught 10 passes for 157 yards (15.7 ypc). The Texas native ranked as the No. 28 recruit in the 2013 247 Sports composite rankings.

Florida's offense isn't going to take a huge step forward in 2015, but new coach Jim McElwain will make a difference with this group. Robinson was the go-to target in the Gators' passing offense last year, grabbing 53 receptions for 810 yards and seven scores. McElwain's offense at Colorado State was instrumental in receiver Rashard Higgins (96 catches for 1,750 yards and 17 scores) pushing for All-America honors last season. Robinson won't make that big of a jump in receiving totals, but he should benefit from the head coaching change this year.

With the departure of quarterback Jameis Winston, four starters on the offensive line and receiving targets Rashad Greene (WR) and Nick O'Leary (TE), there are a handful of new faces in key roles for Florida State's offense this spring. Regardless of who takes the snaps under center for the Seminoles, Rudolph should be one of the team's top playmakers in 2015. He caught 38 passes for 555 yards and four scores as a true freshman last season. Rudolph, Ermon Lane and incoming freshmen George Campbell and Da'Vante Phillips give Florida State one of the nation's most talented groups of receivers for the next couple of seasons. 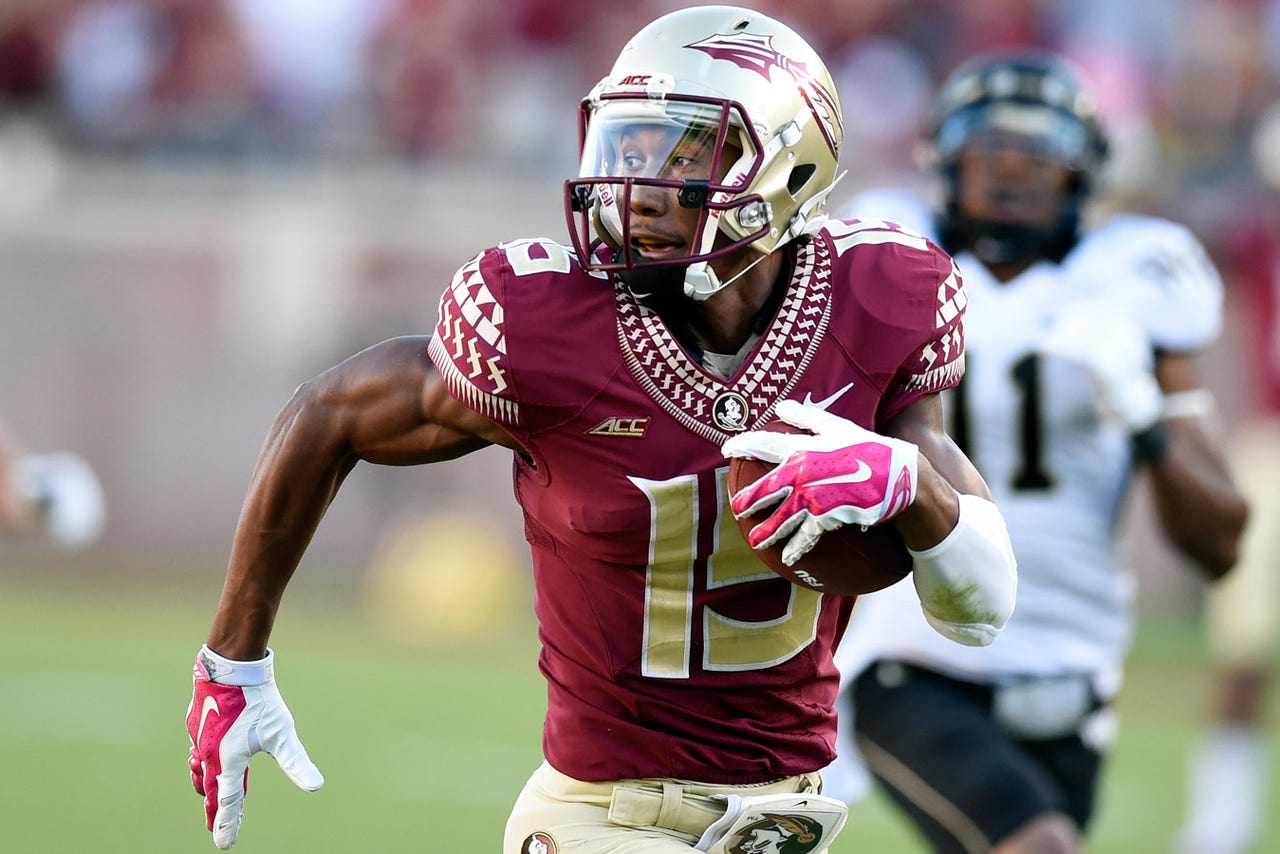 As a true freshman last season, Scott led the team with 76 catches (including eight for scores) and recorded 965 receiving yards in 13 games. Scott capped the season on a high note by torching rival South Carolina for 185 yards and two scores, while also posting eight catches for 114 yards against Oklahoma. Scott should easily eclipse the 1,000-yard mark in 2015, especially if rising star quarterback Deshaun Watson stays healthy.

Despite injuries to Utah State's top three quarterbacks, the Aggies still finished 10-4 and claimed victories in six out of their last seven games. Sharp was a key junior college find on the recruiting trail for coach Matt Wells, as the California native led the team with 66 catches for 939 yards and seven scores. Assuming Utah State has better luck in the injury department this year, Sharp should easily eclipse 1,000 yards and rank among the Mountain West's best at receiver.

Sheperd entered 2014 with just 15 career receptions, but the Missouri native emerged as one of the top big-play threats in the Big 12. In 13 games, he grabbed 39 receptions for 737 yards and five scores. Sheperd developed a good rapport with quarterback Mason Rudolph late in the season, catching 12 passes for 254 yards and three scores in the final two games of 2014. With Rudolph under center for a full season, Sheperd is expected to be an even bigger piece of the offense in 2015.

With the departure of Amari Cooper, DeAndrew White and Christion Jones, Alabama is essentially starting over at receiver in 2015. Go ahead and pencil in a name from the Crimson Tide roster in this space, the only question is which player will emerge as a go-to target for the quarterback in 2015? Sims and Foster are the two most likely breakout players on the roster, as the duo combined for 13 catches for 106 yards and one score last season. True freshman Calvin Ridley is another name to watch in Tuscaloosa.

The biggest void on USC's offense heading into 2015 is at receiver with the departure of Nelson Agholor. Last season, Agholor led the Trojans with 104 catches for 1,313 yards and 12 scores. Coach Steve Sarkisian isn't hurting for options at receiver with the emergence of Smith, along with the addition of a talented recruiting class for 2015. Smith ranked second on the team with 54 catches for 724 yards and five scores last season and is expected to emerge as quarterback Cody Kessler's go-to target in 2015. 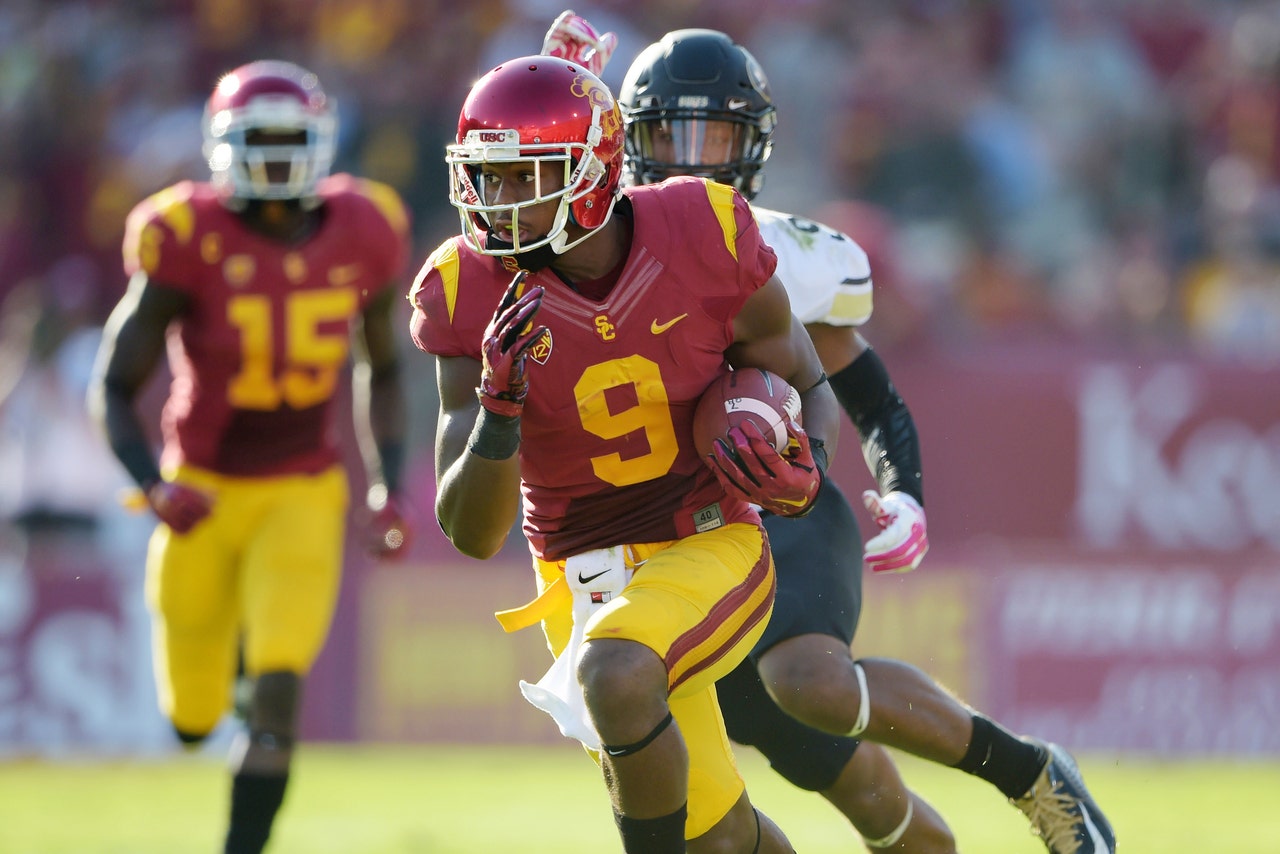 The Broncos lost top receiver Matt Miller early in 2014 due to injury, but the receiving corps didn't miss a beat with the emergence of Sperbeck. The California native caught 51 passes and led the team with 877 yards (17.2 ypc). He also delivered in the Fiesta Bowl with his best performance of 2014 (12 receptions for 199 yards) and caught six passes for 148 yards in a 55-30 win over BYU. Even with a new quarterback taking over at Boise State, Sperbeck should be a lock for All-Mountain West honors in 2015.

The Hilltoppers averaged 374.3 passing yards per game last season and should rank near the top of the nation once again with quarterback Brandon Doughty back under center. Taylor ranked second on the team with 797 yards (17 yards per catch) and third on the stat sheet with seven touchdown catches. Taylor is the team's top big-play threat and should be an even bigger piece of Western Kentucky's offense in 2015.

New coach Mike Riley and coordinator Danny Langsdorf produced their share of prolific passing attacks at Oregon State and a few tweaks are coming to Nebraska's offense in 2015. The Cornhuskers need quarterback Tommy Armstrong to take the next step in his development this season, but the passing game has all of the necessary pieces in place at receiver. Westerkamp was second on the team in 2014 in catches, yards and receiving touchdowns. With Kenny Bell out of eligibility, Westerkamp should slide into the No. 1 receiving role for Armstrong.

Williams ranked as one of the top junior college prospects in the nation going into the 2014 season. The Louisiana native didn't disappoint in his Auburn debut, catching 45 passes for 730 yards and five scores. With Sammie Coates off to the NFL, and Jeremy Johnson -- a better passer than Nick Marshall -- taking over at quarterback, Williams will see more opportunities in his direction this year.

The Bulldogs have several new faces stepping into the lineup with just seven returning starters in 2015. However, there's little doubt about the strength of this team next season with the return of quarterback Dak Prescott. The senior should be one of the top quarterbacks in the nation and has a talented group of receivers at his disposal. Wilson is a nightmare matchup for opposing defensive backs at 6-foot-5 and 225 pounds. The Birmingham native finished 2014 on a tear, catching at least eight passes in each of his final three games.