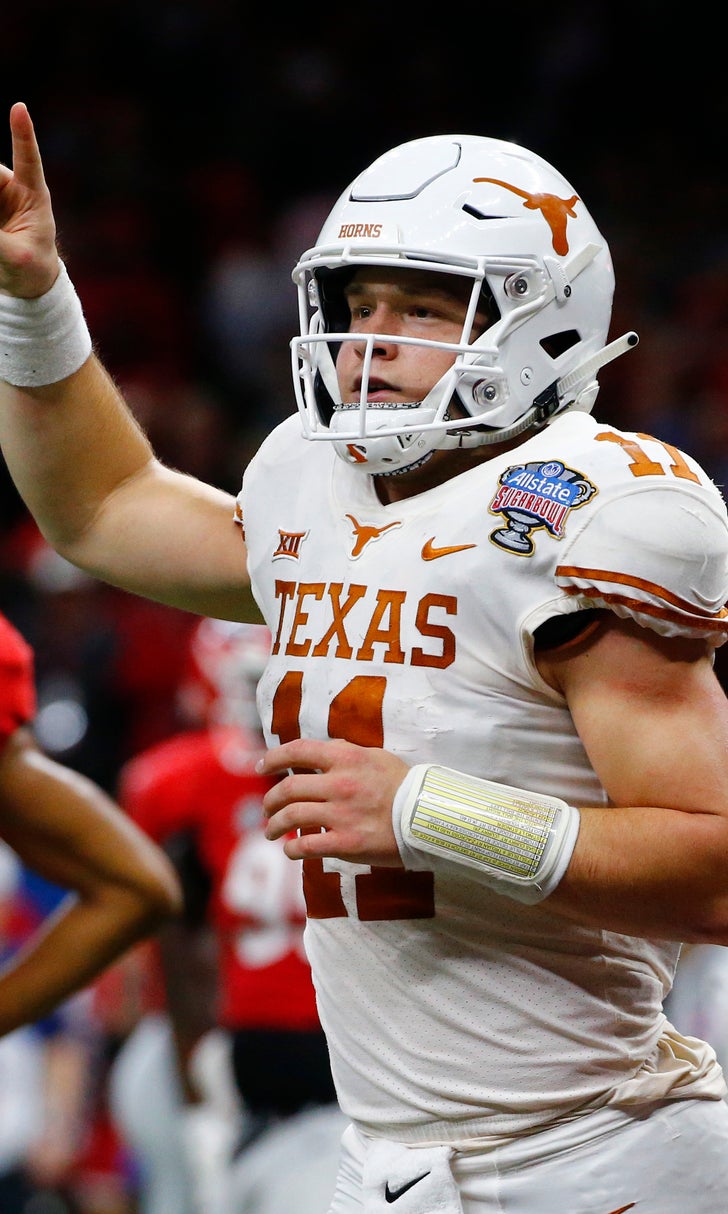 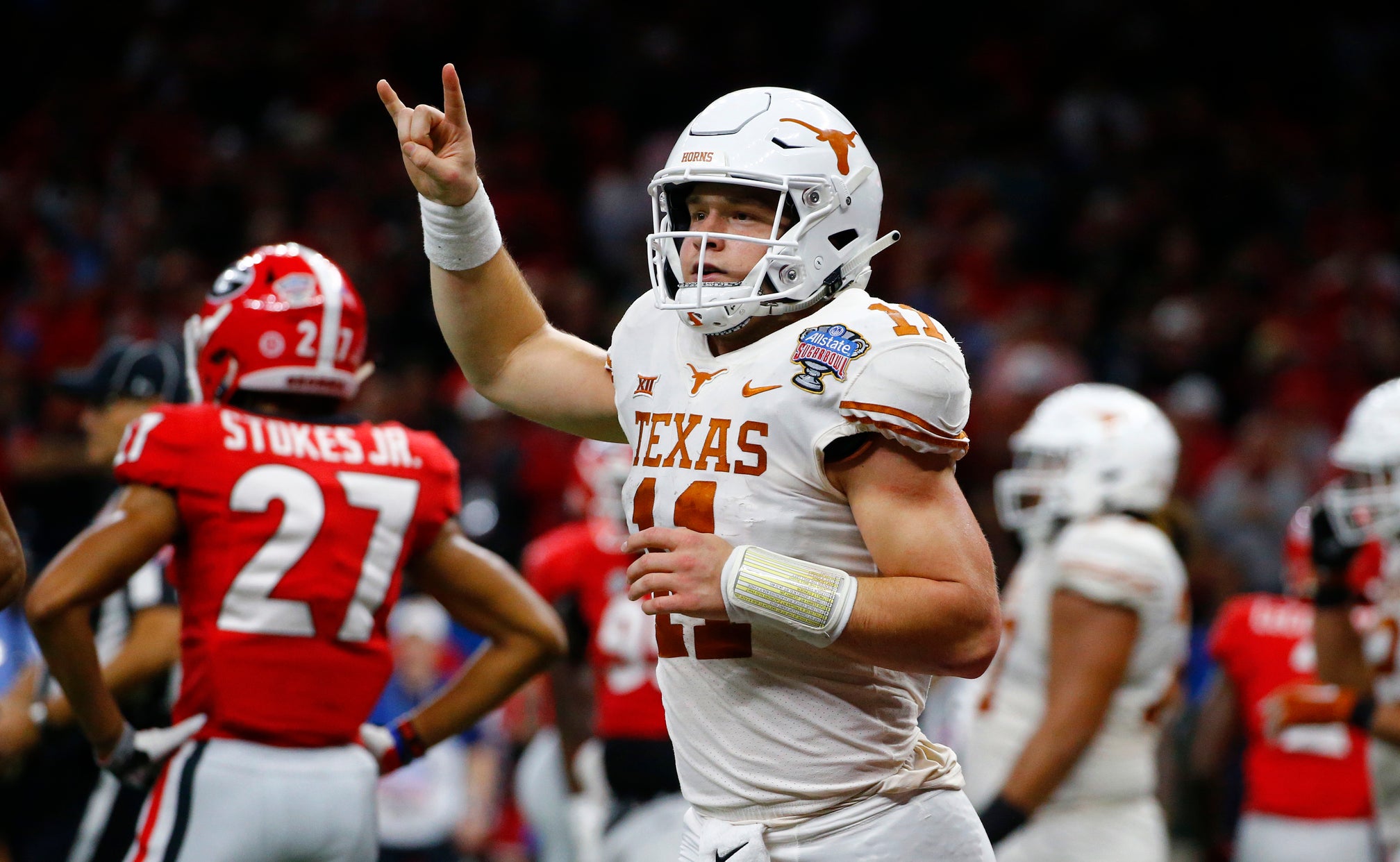 Texas QB Sam Ehlinger likely to 'crank it up a notch'

AUSTIN, Texas (AP) — The hits came at Sam Ehlinger from just about every angle this summer.

Baker Mayfield jabbed him first. Then Terry Bradshaw landed one.

The junior quarterback for Texas didn't seem to mind, and will likely care even less every time he gets to flash a "Hook'em horns" hand sign after scoring a touchdown. Which he does a lot.

"It's completely irrelevant in my mind," Ehlinger said as he leads No. 10 Texas into a 2019 season when the Longhorns will be expected to again challenge for the Big 12 title. "All that's outside noise."

The noisy Summer of (Bashing) Sam erupted in June when Mayfield, the former Heisman Trophy-winning Oklahoma quarterback now with the Cleveland Browns, used a radio interview to dig deep into a pool of rivalry resentment. He and Ehlinger played for rival powerhouse high school programs in the Austin area.

Mayfield said Ehlinger wasn't as good as Drew Brees or Nick Foles, two pro quarterbacks who also came from Ehlinger's Westlake High School (and some pretty good company to be mentioned with).

"Sam can stay down there in Texas," Mayfield said. "That'll stir the pot. He doesn't like me, and I hope he knows I don't like him either."

Then came Bradshaw, the retired NFL great who said Ehlinger "ain't that good" when speaking to a Louisiana Tech fan group. Texas hosts the Bulldogs in the season opener Aug. 31. While Mayfield's comments dripped with venom, Bradshaw's words sounded more like goofy chatter among a group of fans.

Ehlinger has been through far, far worse, long before he stepped on campus and into the pressure cooker of Texas football. He was in eighth grade when his father died of an apparent heart attack while swimming in the Escape from Alcatraz triathlon. Ehlinger later had his dad's race number from that day tattooed on his rib cage in Roman numerals: MDLXV.

While Ehlinger may ignore the jabs from the Mayfields of the world, don't expect him to forget them.

"Our guys file certain things away," Texas coach Tom Herman said. "Sam loves to play with a chip on his shoulder. I'm sure he'll use this to crank it up a notch."

After last season's home loss to West Virginia, Texas players didn't like the Mountaineers flashing upside down "Hook'em" signs. "I remember every single team/player that disrespects the rich tradition of the University of Texas by putting the Horns down. Do not think it will be forgotten," Ehlinger wrote on Twitter.

The tweet was deleted a few hours later, but after Texas lost to Oklahoma in the Big 12 title game, Ehlinger vowed to not forget the hard feelings of that defeat.

"I will make it my mission to never let this team, or this school, feel this disappointment again," he said.

That comment, and his "We're baack!" declaration after the Longhorns beat Georgia in the Sugar Bowl, will follow Texas into this season.

And his teammates hear every word he says.

"When he speaks," offensive lineman Sam Cosmi said, "we all listen."

Ehlinger has silenced the former critics within the burnt-orange crowd. For most of the past decade, the most painful jabs a Longhorns quarterback would face often came from inside Texas' Royal-Memorial Stadium.

Ehlinger arrived long after the heyday of Vince Young and Colt McCoy. The span of 2010-2017 included four losing seasons and struggling quarterbacks, and there were plenty of boos from the home crowd. Even Ehlinger took his share of lumps as a freshman in 2016 when he split starts with Shane Buechele and Texas finished 7-6.

He took more friendly fire after throwing two interceptions in a season-opening loss at Maryland in 2018. But Herman didn't waver and said two days later Ehlinger was still his No. 1 QB. Herman later acknowledged the quarterback was "shook" by the loss.

Ehlinger rallied quickly and finished with 25 passing touchdowns and 16 more rushing as Texas went 10-4 and played for the Big 12 title. Then came the Sugar Bowl and his triumphant declaration on national television.

"I've always said that I want the University of Texas to always be competing for championships," he said. "I think we're at a place in our program where we have a chance to do that. That's ultimately where I want us to be."