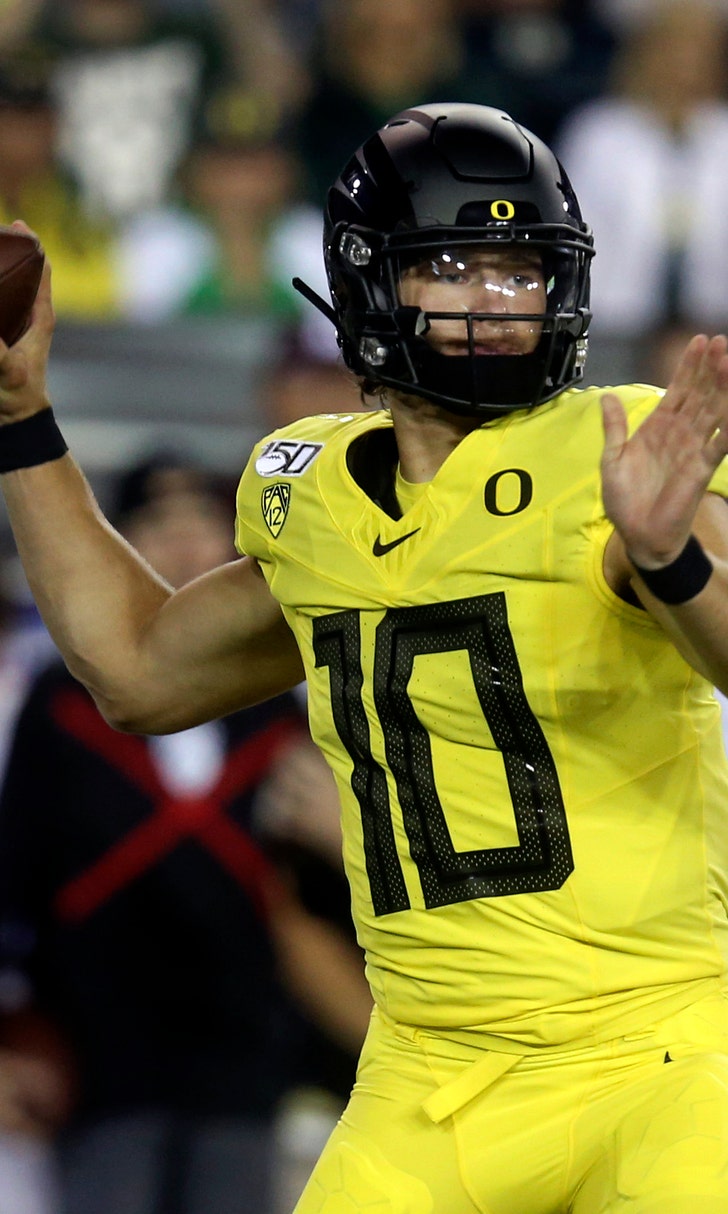 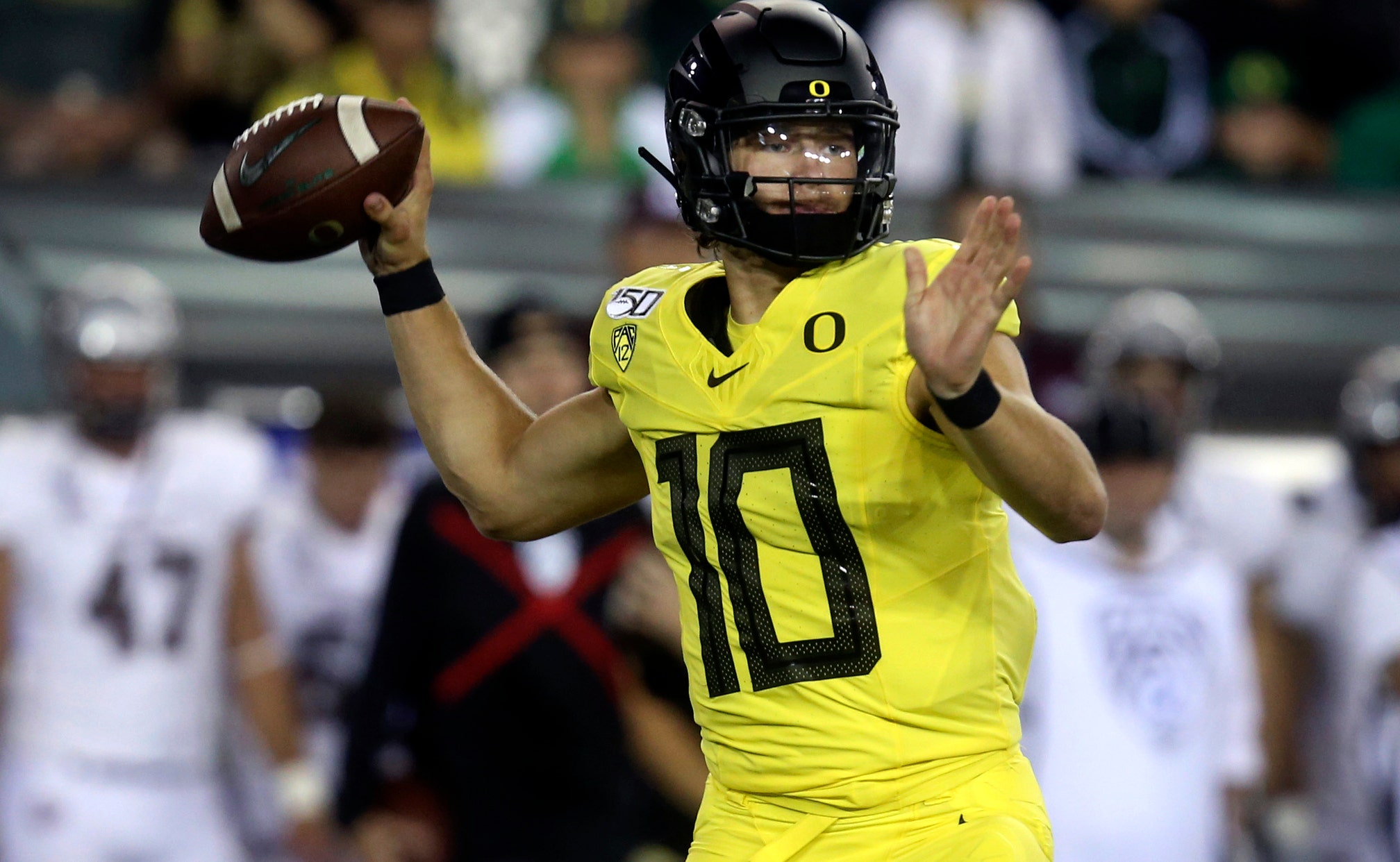 Stanford looks to bounce back vs. No. 16 Oregon

STANFORD, Calif. (AP) — Stanford coach David Shaw believes he speaks for most of the rest of the Pac-12 coaches when he talks about his lack of excitement over the fact that Oregon quarterback Justin Herbert decided to return to school rather than enter the NFL draft as a probable first-round pick.

Instead of getting to enjoy watching Herbert play on Sundays, Shaw now must contend with him on the field once again when his slumping Cardinal (1-2, 0-1 Pac-12) host the 16th-ranked Ducks (2-1, 0-0) on Saturday.

"I think he got some bad advice to come back to school," Shaw joked. "There are 11 other coaches in the conference who would say it. I love watching the kid play. He has a sweet stroke. We call it a repeatable motion. It's a very smooth throwing motion. He's such a good athlete, moves so well in the pocket, can escape the pocket, throws the deep ball with ease. You can see why he's so highly touted by NFL scouts."

Herbert showed that last year against Stanford when he completed 26 of 33 passes for 346 yards in a 38-31 overtime loss at home. Now he gets to face a defense that has struggled to stop big passing plays the past two weeks in losses to Southern California and Central Florida, who both lack a quarterback as capable as Herbert.

If that happens again, the Cardinal could be looking at their first three-game losing streak since 2008 — three years before Shaw took over for Jim Harbaugh.

"They got explosive plays and we didn't," Shaw said of last week's 45-27 loss to Central Florida. "In three games, we've given up 18 plays of 20 or more yards. That's not us. It's missed tackles, missed alignments, letting receivers run free. We've got to play better from the top down on defense."

The Ducks have been outstanding defensively the past two weeks at home against lesser opponents, allowing just nine points against Nevada and Montana and no TDs in the past 27 drives.

Now they have to contend with their first true road game, after losing a neutral site game to Auburn to open the season.

"You have to understand that you've got to pack your toughness, your resiliency, you've got to pack your perseverance, all the stuff that goes with being a tough football team on the road, knowing that when you leave your home and you go do it on the road there's the factors that are outside the football game itself," coach Mario Cristobal said. "They can't matter, they cannot be relevant and it requires a certain type of mindset. With young players or older players, it's always going to be a huge point of emphasis"

The Ducks have lost three straight in the series for the first time since 1995-97, with last year's 38-31 overtime loss at home particularly painful. Oregon led by 17 points at halftime but allowed Stanford to tie the game after C.J. Verdell lost a fumble in the final minute of regulation. Cristobal doesn't believe there will be any hangover for Verdell heading into the rematch.

"I don't think that exists with our guys and the way our guys are built up and the way we train. If there's anything lingering it's nothing but motivation."

The Cardinal entered the season with little depth on the offensive line and that has been tested early this season. Star left tackle Walker Little went down with a season-ending knee injury in the opener. Guard Dylan Powell is doubtful this week but right tackle Foster Sarell is probable to return.

Oregon has lost its last four conference openers, including last year's collapse against the Cardinal. With trips still remaining to No. 22 Washington, No. 24 Arizona State and USC, as well as home games against No. 23 California and No. 19 Washington State, the Ducks can ill afford an early slipup if they want to win the North.

Stanford cornerback Paulson Adebo established himself as one of the top cover cornerbacks in the nation last season. But he has been beaten a few times early this season, most notably on a 38-yard TD catch last week by Central Florida's Gabe Davis. Adebo also got beat a couple of times the previous week against USC.

"I don't know if it's called struggling or just playing against really good receivers," Shaw said. "That's the hard part for a corner. It's a little bit like an offensive lineman. If you keep the guy covered for the whole game they don't say your name, you must be doing a pretty good job, but if you give up two plays, which is what Paulson gave up, two plays now you have a bad game."