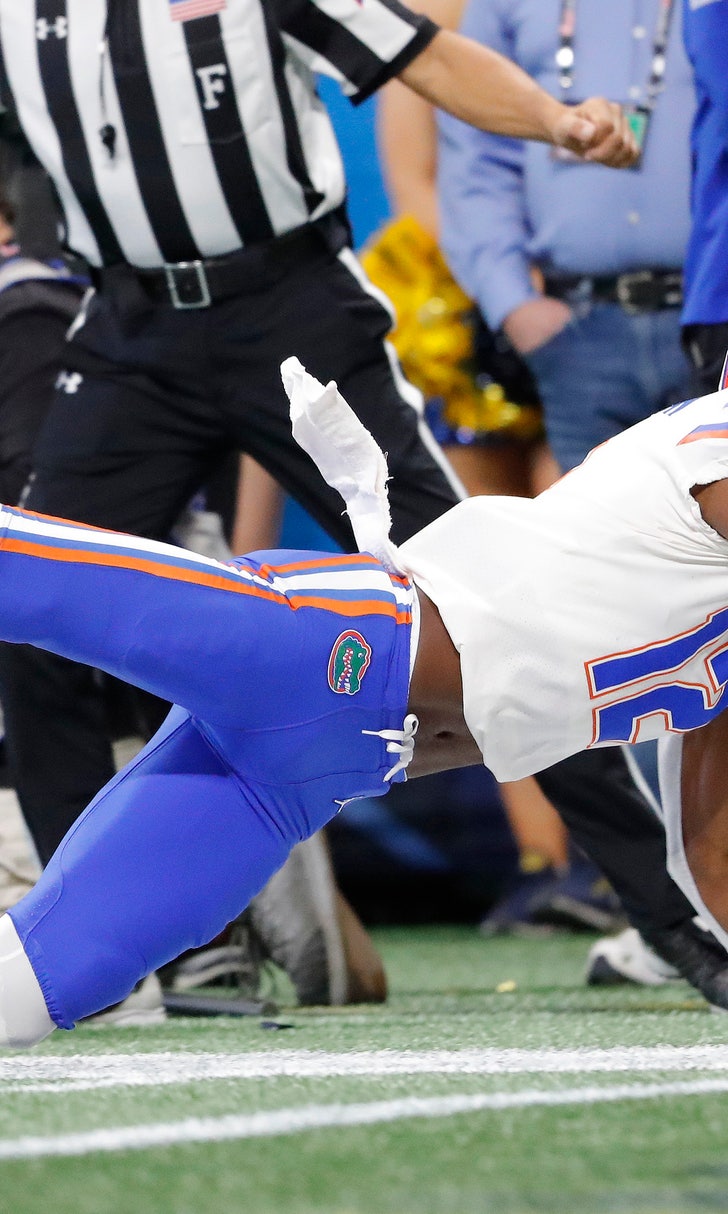 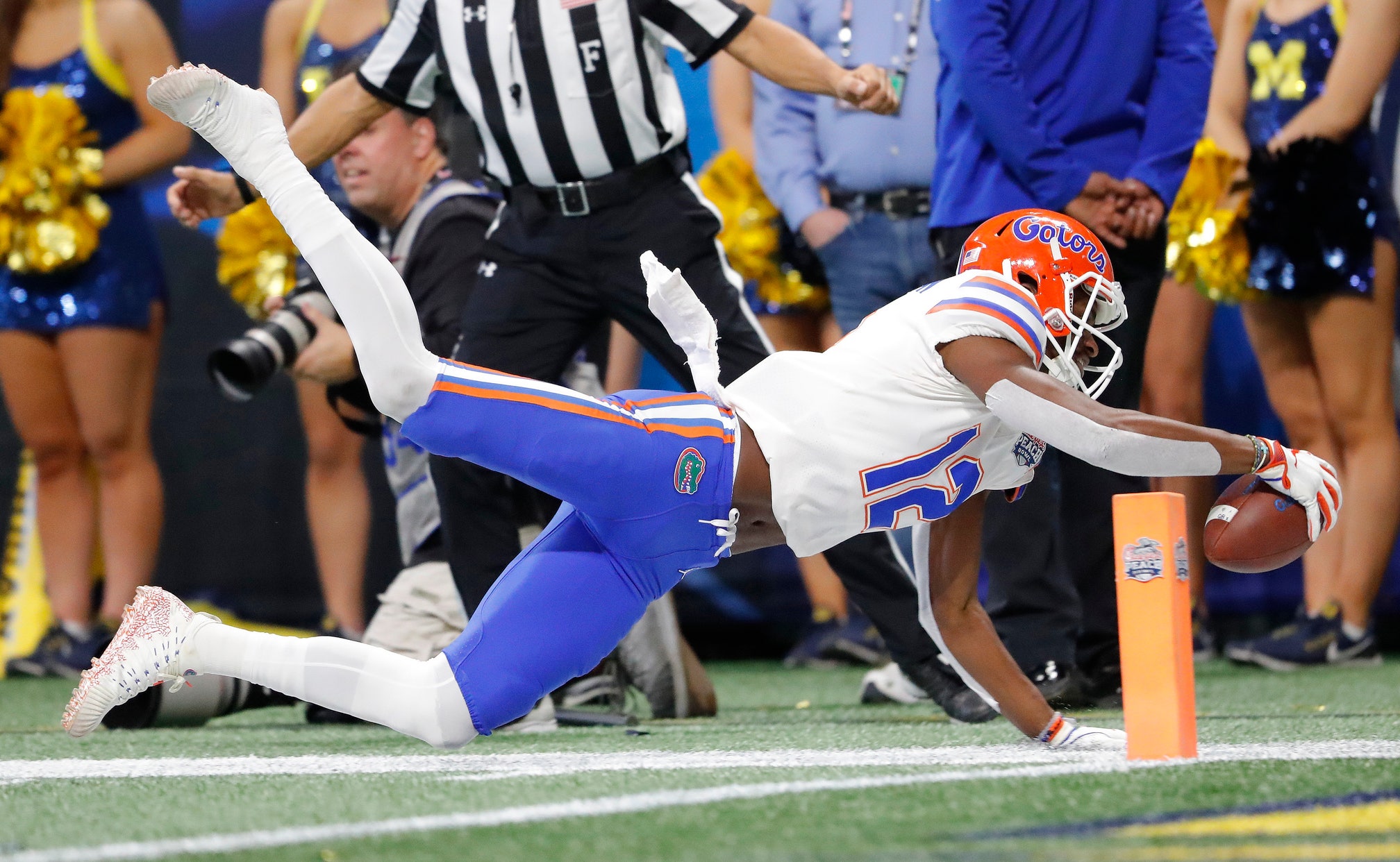 Lamical Perine had a 5-yard scoring catch and 53-yard touchdown run to lead No. 10 Florida's strong rushing attack Saturday, helping the Gators affirm their return to relevance with a 41-15 rout of No. 8 Michigan in the Peach Bowl.

After finishing 4-7 in 2017, Florida enjoyed a dramatic turnaround in Dan Mullen's first season as coach.

The victory put Florida (10-3) in position to enter next season as a Top 10 team.

"In year one, to come here and to know where we were this time a year ago to where we are today, it's special to me," Mullen said. "... To finish as a 10-win season, one of the Top 10 teams in the country, that's pretty special."

"I don't know many teams that'd be lining up to play us right now," Mullen said.

Chauncey Gardner-Johnson led Florida's defense with two interceptions, including one returned 30 yards for a touchdown with less than five minutes remaining. Gardner-Johnson's first interception early in the second half, when Florida led only 13-10, set the tone for the Gators.

"We showed a lot of heart and a lot of fight and treated it like a regular week," Gardner-Johnson said. "I don't know how they prepared. But I don't think they prepared too well."

The Wolverines faced the unenviable task of having four top starters, including top rusher Karan Higdon and leading tackler Devin Bush, skip the game to focus on the NFL draft.

Coach Jim Harbaugh said he thought his Michigan players recovered from allowing 567 yards in a 62-39 loss to Ohio State to close the regular season, ending the Wolverines' hopes for a spot in the College Football Playoff.

"It would have been a great season had we won this game," he said. "Didn't get that done."

Harbaugh said he does not plan staff changes.

Florida compiled 427 total yards, including 257 on the ground.

Trailing 13-10, Michigan's first possession of the second half began at its 48. The excellent scoring opportunity was only a prelude for disappointment.

The Wolverines gained one first down before Patterson's deep pass over the middle was intercepted at the 3 by Gardner-Johnson, whose 47-yard return to the Michigan 44 set up the Gators.

Florida: From the start, with players bouncing up and down on the sideline, the Gators seemed intent on ending their feel-good season with a win. Florida made a statement it will be a team to watch in the Southeastern Conference's Eastern Division in 2019 after it piled up big yards on the nation's top-ranked defense.

Michigan: The Wolverines' loss of talent was evident on both sides of the ball, especially at running back. Tru Wilson made the start as the replacement for Higdon at running back but had only three carries for nine yards. Christian Turner and Chris Evans each had seven carries. The committee approach couldn't make up for Higdon's departure. Michigan was held to 66 yards rushing, including 32 by Turner.

On the Wolverines' first possession, Turner's 46-yard touchdown run was turned into a modest 8-yard gain when the review showed he stepped out of bounds at the Florida 38.

Michigan came away with no points when fullback Ben Mason was stopped for no gain on back-to-back runs.

Patterson's apparent 8-yard scoring pass to Tarik Black was taken away in the fourth quarter when the review showed Black lost control of the ball when falling back.

Turner, who played in only two regular-season games, will retain his freshman eligibility in 2019 under college football's new redshirt rule.

Shea Patterson's 9-yard scoring pass to Donovan Peoples-Jones in the first quarter was the Wolverines' only touchdown. Patterson threw two second-half interceptions and completed 22 of 36 passes for 236 yards and a touchdown.

Florida: Franks will return for his junior season as Florida will attempt to build off the 10-win season. It opens the 2019 season against Miami on Aug. 31 in Orlando.

Michigan: The Wolverines expect to have four returning starters on their offensive line, including left guard Ben Bredeson, when they open the 2019 season Aug. 31 against Middle Tennessee State. Patterson returns for his senior season at quarterback, with Michigan again trying to build an offense to keep pace with its recent string of top-five defenses.