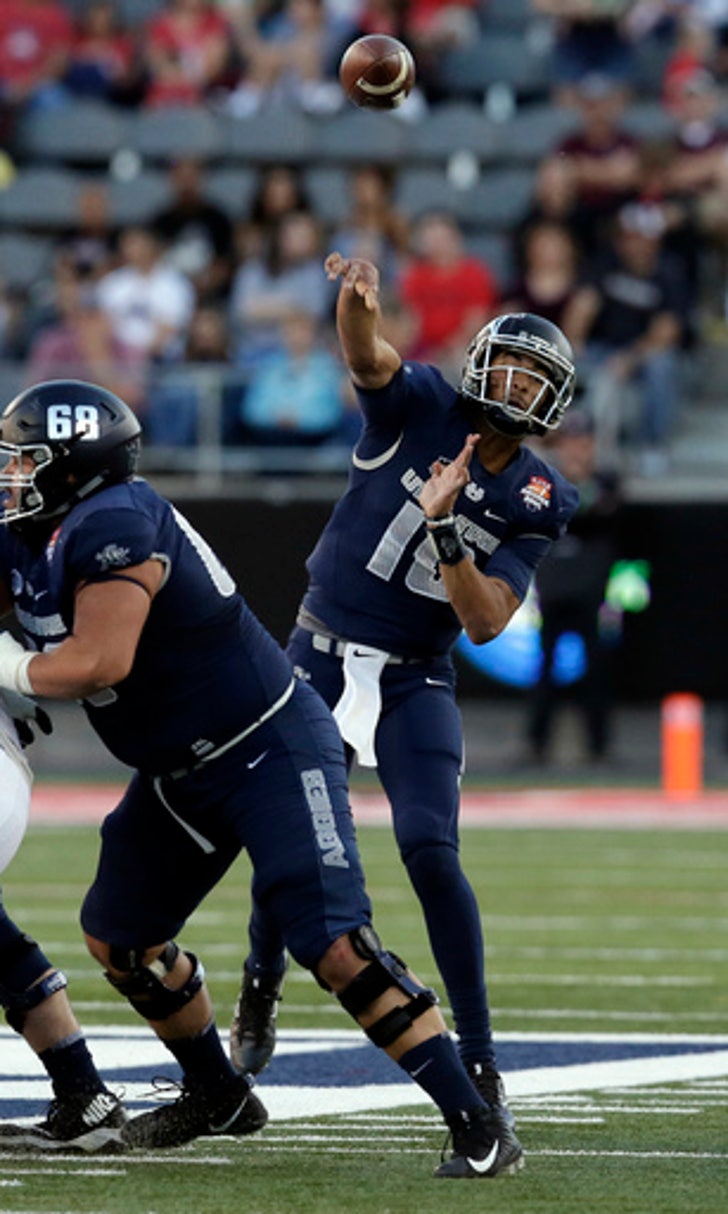 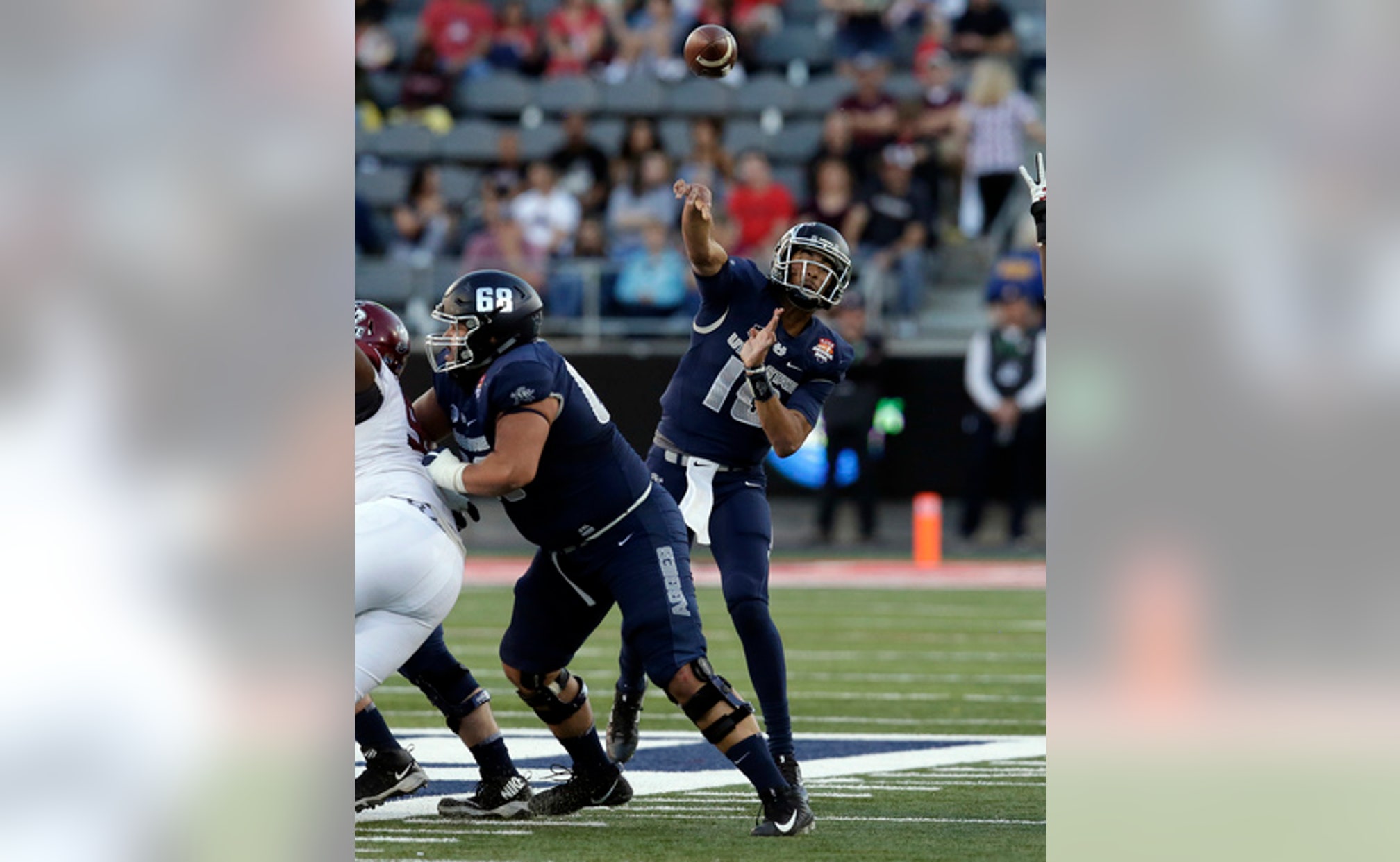 previous story
Of one mind: Mayfield and Riley ascend together at Oklahoma
next story
No. 2 Michigan State routs Cleveland State 111-61 (Dec 29, 2017)

TUCSON, Ariz. (AP) The Arizona Bowl is not typically the type of game where fans storm the field. Certainly not for a team that finished 7-6.

But this has been a long, arduous wait for New Mexico State fans. All those losing seasons, all that disappointment, all that time between bowl games.

Storm away, Aggies. You've earned it.

Larry Rose III scored on a 21-yard run in overtime and New Mexico State won in its first bowl game in 57 years, beating Utah State 26-20 in the Arizona Bowl on Friday night.

''I'm just thrilled for these kids and this community,'' New Mexico State coach Doug Martin. ''Just look at these fans who showed up here. This is an unbelievable day for us.

Utah State (6-7) had the ball first in overtime and Dominik Eberle hit the right upright on a 29-yard field goal attempt, sending a groan through the Utah State crowd. Eberle made 16 for 18 field goals during the regular season, but missed three in the Arizona Bowl.

New Mexico State won it when Jones burst through a hole on the left side, sending the Aggies and their fans rushing onto the Arizona Stadium field. Jones finished with 142 yards on 16 carries.

''He's my field goal kicker. I love that kid and he's been really consistent all year,'' Utah State coach Matt Wells said. ''Was I surprised? Yes. Was I disappointed in him? Not one bit.''

The third Arizona Bowl started with some early fireworks on special teams.

Utah State's Savon Scarver returned a kickoff 96 yards for a touchdown in the first quarter, then New Mexico State's Jason Huntley took the ensuing kickoff 100 yards for a score.

The excitement leveled off considerably until LaJuan Hunt scored on a 1-yard run in the fourth quarter, set up by a shanked punt from New Mexico State's Payton Theisler.

New Mexico State's Tyler Rogers, held in check most of the game, answered by moving the Aggies on a 69-yard scoring drive, capped by his 11-yard touchdown pass to Jaleel Scott that tied it at 20. A video review overturned the initial call that Scott was out of bounds.

Rogers, who was second nationally with 347 yards passing per game during the regular season, threw for 191 yards and touchdown with two interceptions.

This was a rematch 57 years in the making.

New Mexico State had not been to a bowl game since the 1960 Sun Bowl. The opponent: Utah State.

Utah State went to eight bowls after that, including six of the last seven.

New Mexico State went into a bowl-less tailspin, finishing with a losing record 44 times since that last bowl game. It had 14 straight losing seasons, including a 0-12 mark in 2005, before winning its final two games this season to finally get back to bowling.

The long-awaited rematch turned into the Special Teams Bowl in the first half.

New Mexico State's Dylan Brown made two field goals, Eberle made two and missed two, and each team had a kickoff return for a touchdown.

After a third quarter of defensive stops and punting, both teams found the end zone to send the game overtime - and, later, New Mexico State's fans onto the field.

''I thought it was a fairly clean game and pretty aggressive on both sides,'' Wells said. ''If we had made the field goals early, then maybe it would have been a different ball game.''

Utah State racked up 441 yards of offense and kept Rogers from having a big game, but had a rough night on special teams.

New Mexico State made its first postseason game in nearly six decades a memorable one by rallying for a victory.

Utah State had the game's best chance for the game's first offensive touchdown early in the third quarter, when Jordan Love completed a 41-yard pass to Ron'quavion Tarver to New Mexico State's 1.

On the next play, New Mexico State's Terrill Hanks knocked down Love's pitch to Hunt and recovered the ball himself at the 12-yard line, ending Utah State's hopes.

Both teams struggled on third downs, converting a combined 5 of 40. Utah State was 1 for 18 and New Mexico State was 4 for 22. The teams had a combined 20 punts

Utah State must replace seniors Hunt and cornerback Jalen Davis, a second-team AP All-American, but Love is a redshirt freshman.

New Mexico State will have big holes to replace with Rogers and Rose among the seniors it will have to replace.

Utah State Aggies
share story
those were the latest stories
Want to see more?
View All Stories
Fox Sports™ and © 2021 Fox Media LLC and Fox Sports Interactive Media, LLC. All rights reserved. Use of this website (including any and all parts and components) constitutes your acceptance of these Terms of Use and Updated Privacy Policy. Advertising Choices. Do Not Sell my Personal Info