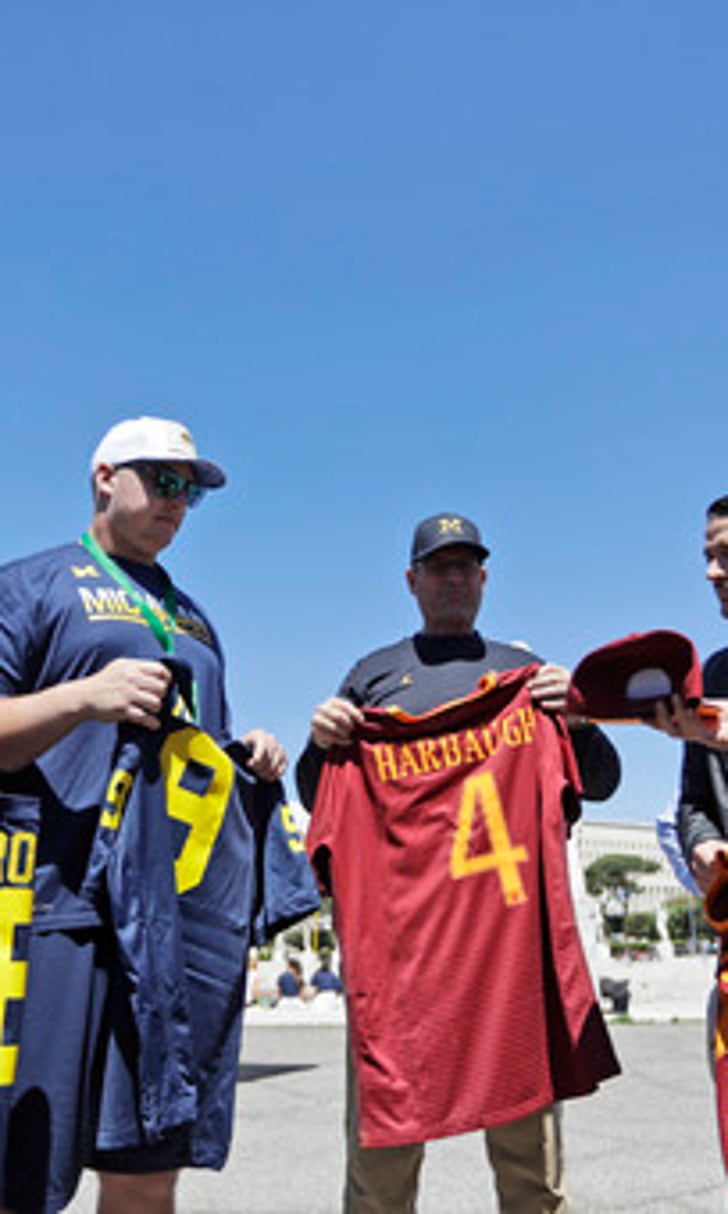 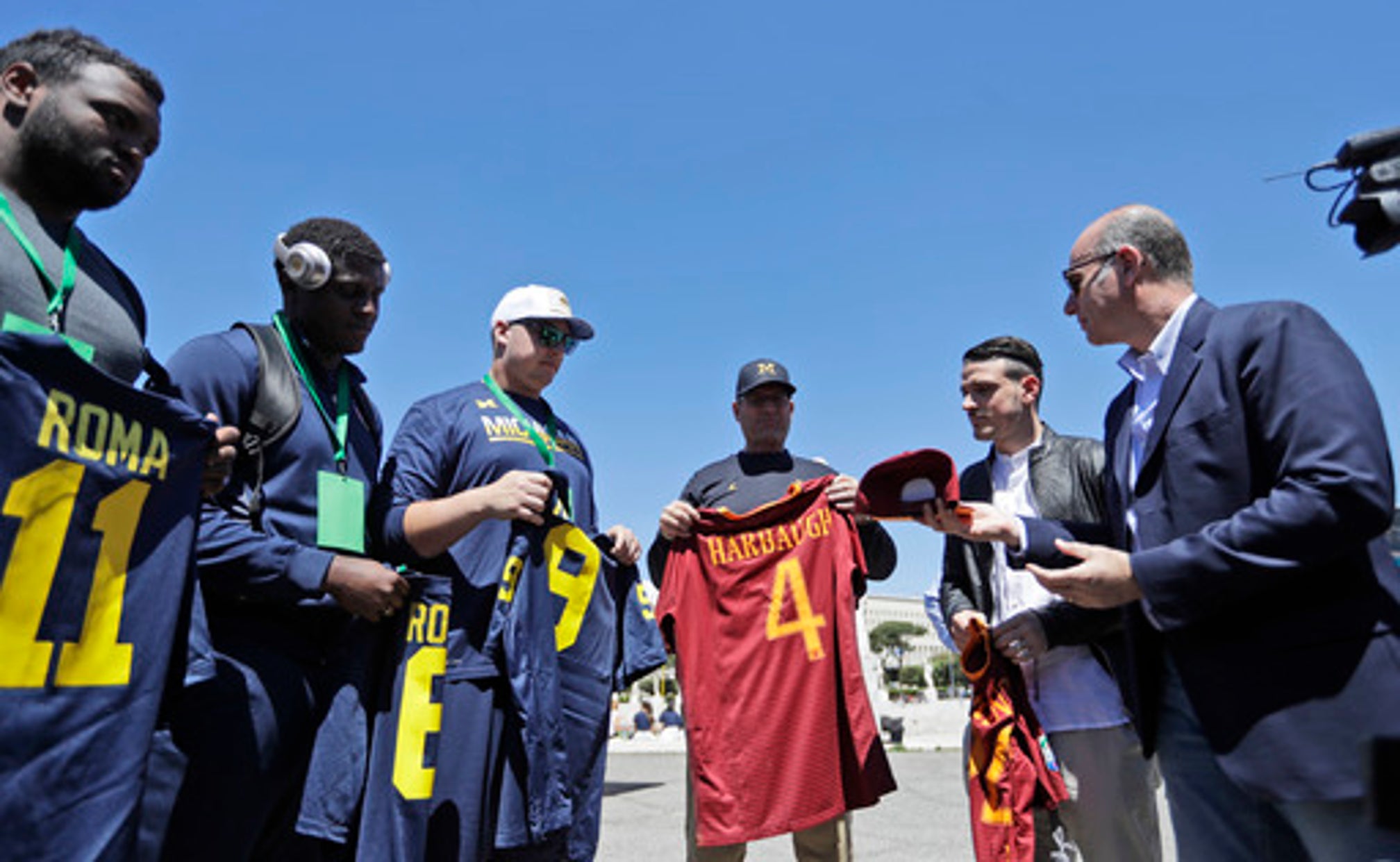 Harbaugh thanks Italy for hospitality during Rome trip

ROME (AP) Jim Harbaugh stood with a megaphone, his team at his back, in front of more than a thousand spectators, some sporting maize and blue.

He thanked the Italians in attendance for their hospitality, enthusiasm and for helping Michigan's football program experience a trip of a lifetime.

''This has been the best week of practice this football team has ever had, being with you here in the great city of Rome,'' Harbaugh shouted into the stands of Stadio de Marmi, a facility adjacent to Stadio Olimpico in the Eternal City. ''There's never been a better practice venue than this one right here. And we are lucky, lucky, lucky to be with you here.

The Wolverines wrapped up their spring practice in style Saturday in Italy, belting out a rendition of ''The Victors,'' in what was their final act as a team in Rome.

Michigan's players tossed gloves and T-shirts into the crowd, signed autographs and posed for selfies to show gratitude for the unique college football experience.

''With coach Harbaugh, whether it's resources, time, ideas, it's all geared toward his roster,'' Michigan quarterback Wilton Speight said. ''And you feel special as a player because of that.''

Before practice, Harbaugh outlined his plans to take Michigan on another trip like this next spring as long as the NCAA allows it, of course. Harbaugh said he would like to either go to South Africa or Brazil, adding he'll let the team decide the destination.

The funding for this trip was provided by an anonymous Michigan donor. Harbaugh took some time to explain how he hopes this type of trip is embraced across college football. If a program has the resources, he said, they should invest it in their players.

''This should be experienced by others and once someone sees someone else do something, they see it's possible,'' Harbaugh said. ''This is a good way to spend our resources: Investing in players,'' he said. ''We can't close ourselves off. We have to connect with the rest of the world.

''From this experience, it's been amazing. We're all similar. We're all part of the same team: The human race. When you throw out a ball, there is no language barrier anymore. Everybody's speaking the same language. So we feel like innovators. We feel like pioneers. Innovators for the good.''

Michigan's players will have the entire month of May off before returning to football activities in June, enjoying a break that appears to be rare in major college football. Harbaugh wants to allow his players the opportunity to study abroad, find jobs, get internships and be with their families. He simply wants to give them time to do what they want with down time.

''The bang for the buck here, the educational experience, it's priceless. It really is,'' Harbaugh said. ''The whole month of May, I want them to have options. I saw that this had gotten to be 12 months a year of `Do this. Do that. This is when you do this or that,' whether it's fall, winter, spring or summer. Now they have options. Options to come here. To study abroad, to do internships in Europe or back in Ann Arbor and the United States.

''They can take classes in the spring. They can go home. They can get a job. I wanted them to have options like other students have. . And this has been a really dynamic learning experience.''

The team walked the streets of Rome. They toured the Colosseum and the Pantheon. They saw Pope Francis and the Sistine Chapel. And they grew closer along the way.

After interacting with fans Saturday afternoon under clear blue skies in Rome, the Wolverines stopped for photos. They laughed, smiled and enjoyed each other's company.

Harbaugh has called this one of the best weeks of his life. Many members of his team and staff agreed.

''This trip right here, this is a life-changer,'' said offensive coordinator Tim Drevno, who playfully faced Harbaugh at a gladiator school. ''I sat down every night with someone different at the table. You break bread, you laugh and you get more love for them. This has been such a blessing, getting to know guys as people and as players. It's been a lot of fun.''