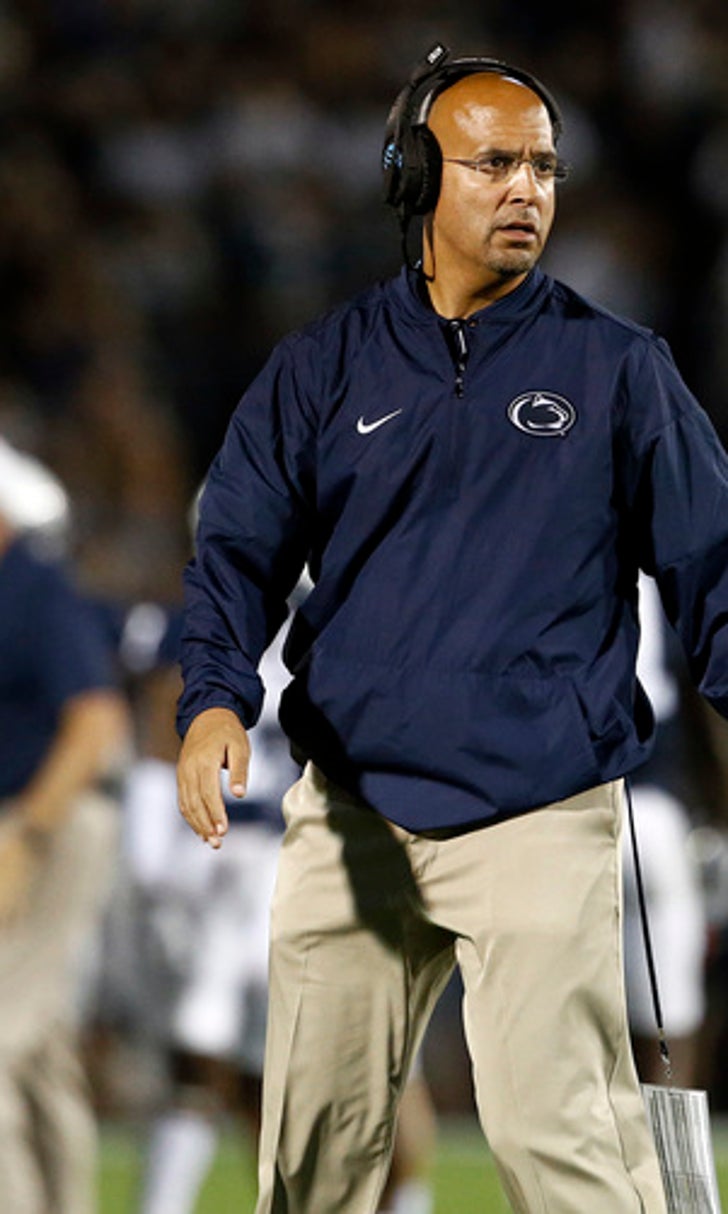 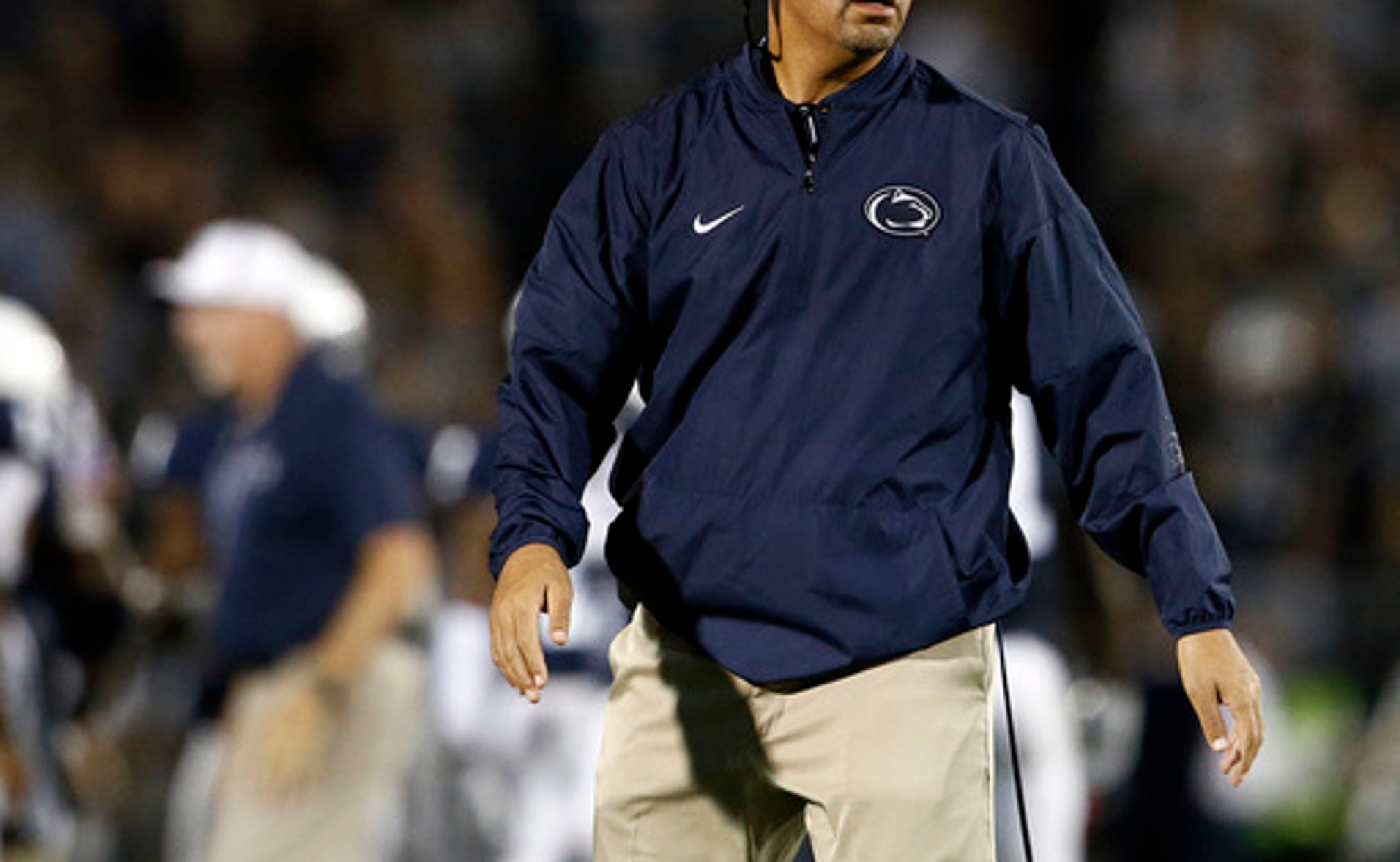 STATE COLLEGE, Pa. (AP) Every aspiring head coach in college football seemingly has a master plan, copious notes and ideas about how to run a program gathered over years as an assistant. Maybe it is written in a notebook or scratched out on legal pads. Could be printed out and stacked in a file folder or two.

James Franklin's master plan is in a three-ring binder, about 8 inches thick, and it sits on a book shelf in his office at Penn State.

The 45-year-old Franklin has it all covered. He said he hardly ever opens the binder anymore, but the plan appears to be working to perfection.

In his fourth season as coach of the Nittany Lions (7-0), Franklin has the No. 2 team in the country and the Nittany Lions are playing as well as they did during Joe Paterno's prime. Coaching in a division that was supposed to be owned by Ohio State's Urban Meyer and Michigan's Jim Harbaugh, Franklin's Penn State team is the defending champion.

Franklin has also done something else: He has restored the pride in Penn State football to pre-Sandusky scandal levels, leading with a grand vision and big, bold personality. He is in many ways the epitome of the 21st century college football coach: An energetic CEO who has his hands in everything while giving his assistants room to work. Cool enough to relate to the players, but demanding enough to get them to embrace his process and give him their respect.

''Every game is like the Super Bowl for us,'' Heisman Trophy contender Saquon Barkley said Wednesday, three days before Penn State visits No. 6 Ohio State for one of the biggest games of the season.

Coaching was not an early calling for Franklin. Football was in some ways a means to an end. Excelling at the game when he was young helped him become the first member of his family to go to college.

Franklin grew up in the Philadelphia area with a father who was in and out of his life. Jim Franklin, Franklin said, became violent when he drank. Once the younger Franklin became old enough to stand up for himself and his mother, Josie, his father left for good.

''What I learned very early on is that if you have a cycle in your family, whether it's alcohol or abuse, the best way to break that cycle, the higher educated you are the better chance you have of not repeating it,'' Franklin said during a pre-dawn interview in his office this week. ''I had major fears that I was going to turn into my father.''

Franklin played quarterback at East Stroudsburg University, a Division II school in northeast Pennsylvania and majored in psychology. He became a graduate assistant coach mostly to pay for grad school.

He spent a summer working at two psychiatric treatment centers in eastern Pennsylvania, one for adolescents and one for adults. He desired to help fix people's problems, but in many cases the best that could be done was manage them. He recalled a woman who was seeking treatment for depression. She was sobbing.

''And I remember saying to myself, `I can't do this. I cannot do this because I'm getting emotional with her,''' he said. ''I want to reach over and put my hand on her, which is not appropriate and I'm sitting there saying to myself one of two things is going to happen: I'm either going to become desensitized to this ... where you're just kind of filling out the form and it doesn't affect you anymore. I don't want to be that person. Or I'm just not going to be able to do this because of the emotional investment. It takes a special person and I just can't do that.''

To this day, Franklin views himself as an extremely empathetic person. He said it is almost comical how easily he gets choked up. His wife, Fumi, will make fun of him for getting misty eyed while watching contestants do well on ''America's Got Talent'' with his daughters, Shola, 10, and Addy, 9.

In coaching, Franklin found a way to be a fixer. He could help kids get into college and change their lives. It didn't take him long to start compiling that binder and get on track to be a head coach.

''He was really high energy and it kind of slapped you in the face when you first meet him and get to know him,'' said Penn State strength and conditioning coach Dwight Galt, who was at Maryland when Franklin was hired as an assistant by the school in 2000. ''It got my attention.''

At an event for minority assistant coaches, Franklin got the attention of Vanderbilt athletic director David Williams. Franklin was not necessarily Vanderbilt's first choice to be head coach in 2011, but that meeting with Williams had led the athletic director to follow his career and it got Franklin an interview.

''He had the thickest notebook I'd ever seen,'' Williams said.

Franklin had unprecedented success at Vanderbilt, going 24-15 and taking the Commodores to three bowl games in three seasons.

Penn State hired him in 2014 to replace Bill O'Brien, who had held the program together after Paterno's downfall. The winningest coach in major college football history was fired in 2011 after the arrest of former Penn State assistant coach Jerry Sandusky for sexually abusing boys.

Franklin had to win over fans, alumni and former players, many of which felt the school was not doing enough to defend Paterno, who died a few months after he was fired. Many Penn Staters wanted one of their own to take over the program. Instead they got Franklin, a gregarious charmer who never misses an opportunity to promote the program.

''It takes time to understand that none of that for James is show,'' said Penn State athletic director Sandy Barbour, who was hired seven months after Franklin. ''You have to have a certain level of exposure to him to understand that's him. And it's him all the time.''

Even some of Franklin's own players say the coach's personality takes some getting used to.

''It was almost like, whoa, what's up with this dude?'' quarterback Trace McSorley said, recalling what it was like to be recruited by Franklin.

The Nittany Lions won seven games in each of Franklin's first two seasons and then started 2-2 last year. Skeptical fans were already losing patience. Penn State has won 16 of 17 games since.

Maybe the biggest move by Franklin was hiring Joe Moorhead to be offensive coordinator last season. Handing over the offense to Moorhead has fed into an image of Franklin that he doesn't particularly care for: Great recruiter, but not necessarily a great tactician.

''I guess what I'm saying is there's a lot of head coaches out there across the country who never called a play,'' Franklin said. ''Who have never been coordinators. I coached in the NFL. I've been a coordinator at multiple schools in multiple major conferences. Have I been a good recruiter in my career? Yeah, but most of the good head coaches and good programs are. But there's more to that. That bothers me a little bit.''

There is little doubt that Franklin's ability to connect with people and his boundless enthusiasm are pivotal to his success.

''He says he always does back flips out of bed in the morning,'' Penn State senior cornerback Grant Haley said, ''and honestly I wouldn't be surprised if that's what he does.''