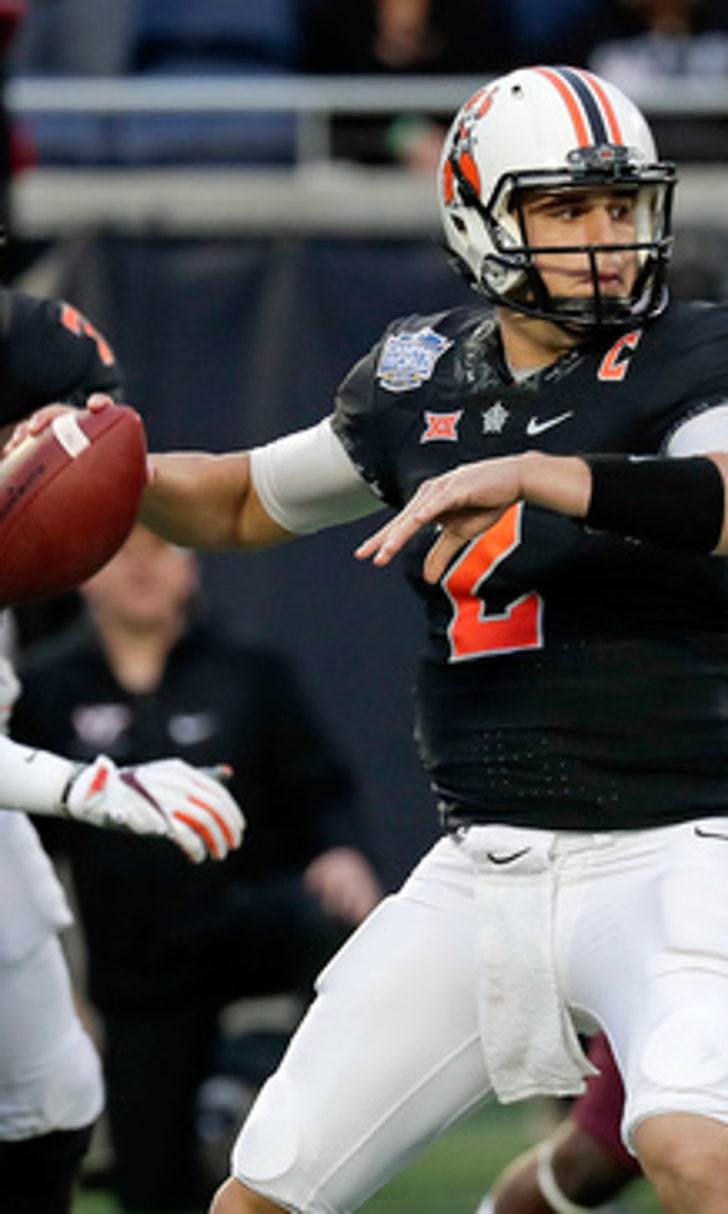 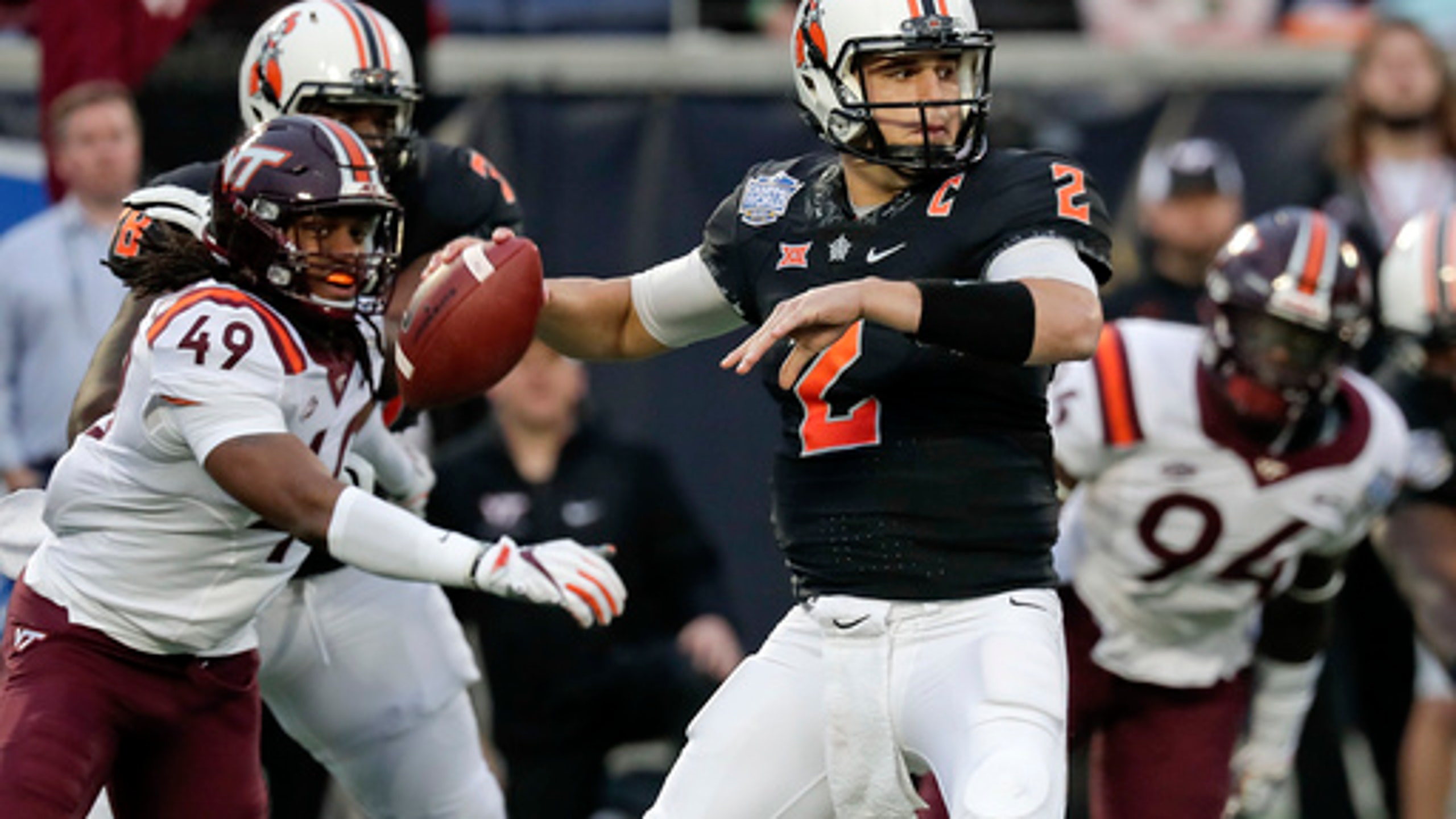 ORLANDO, Fla. (AP) They started playing football at Oklahoma State 116 years ago, and never in that span had there been a run of three consecutive 10-win seasons.

Mason Rudolph threw for 351 yards and a pair of touchdowns on his way to winning game MVP honors, James Washington had a long touchdown grab and became Oklahoma State's career receiving yards leader, and the 17th-ranked Cowboys beat No. 22 Virginia Tech 30-21 in the Camping World Bowl on Thursday night.

''It's cool. It speaks a lot about the senior class, about the leadership on both sides of the ball,'' Rudolph said. ''It's a great achievement for us.''

Washington caught five passes for 126 yards, giving him 4,472 for his career and passing Rashaun Woods for the school mark. Justice Hill ran for 120 yards and another score for the Cowboys (10-3).

''A really good win for our organization,'' Oklahoma State coach Mike Gundy said. ''Defensively, we gave up a lot of rushing yards but we were able to make some stops and force some turnovers. For Oklahoma State, really in the end, that's what it comes down to.''

Josh Jackson ran for two scores and threw for another for the Hokies (9-4), including a rush that got Virginia Tech within 27-21 with 5:40 remaining. Deshawn McClease ran for 124 yards, a Virginia Tech season-best, but the Hokies were hurt by two turnovers in Oklahoma State territory.

''We had a plan and we executed well at times,'' Virginia Tech coach Justin Fuente said. ''I don't really remember Oklahoma State making very many, if any, mistakes. And we made a handful, just enough to kind of keep us from pulling the thing off. That's not to say that Oklahoma State doesn't deserve credit for winning the game. They do.''

Hill came through with perhaps the play of the night. Facing a third-and-11 with 3:30 left, Hill took a handoff, went left, waited for a lane to open - and broke loose for a 31-yard gain down to the Hokies' 18. Matt Ammendola's 38-yard field goal with 2:34 left put the Cowboys up by nine, essentially sealing the outcome.

''Hats off to them,'' said Virginia Tech defensive lineman Ricky Walker, who said the Hokies expected a run on that key late third down. ''They made a good call and they executed it.''

A pair of big missed Hokie opportunities helped Oklahoma State take a 13-7 lead at the break. An 18-play, 10-minute drive that got to the Oklahoma State 1 resulted in no points when the Hokies fumbled a snap away. And after the Cowboys took the lead late in the half, Jackson had a wide-open Henri Murphy down the middle for what would have been a 54-yard score.

But the pass was overthrown, the Hokies never led again, and Rudolph and Washington got the winning ending they sought.

Oklahoma State: Rudolph ended his college career with no less than 52 school records. His two touchdown throws gave him 37 on the season, tying Brandon Weeden's school mark. And he came into the game needing 175 yards to break Weeden's season passing record, eclipsing that in the third quarter.

Virginia Tech: Hokies kicker Joey Slye came up with a highlight in his college finale, making a big tackle on a third-quarter kickoff and celebrating by flexing his biceps as he skipped to the sideline. He ended his career as the Hokies' all-time leader in field goals and points.

Oklahoma State cornerback Rodarius Williams got shaken up twice - both after collisions with teammates. He and defensive end Jordan Brailford crashed into one another in the first quarter on a play where they were pursuing Jackson, and Williams went knee-to-helmet with fellow cornerback A.J. Green in coverage during the third quarter.

Ryan Howard, who hit 382 home runs in 13 seasons with the Philadelphia Phillies, was at the game and cheering for Oklahoma State - even giving Cowboys DT Enoch Smith a Twitter shoutout.