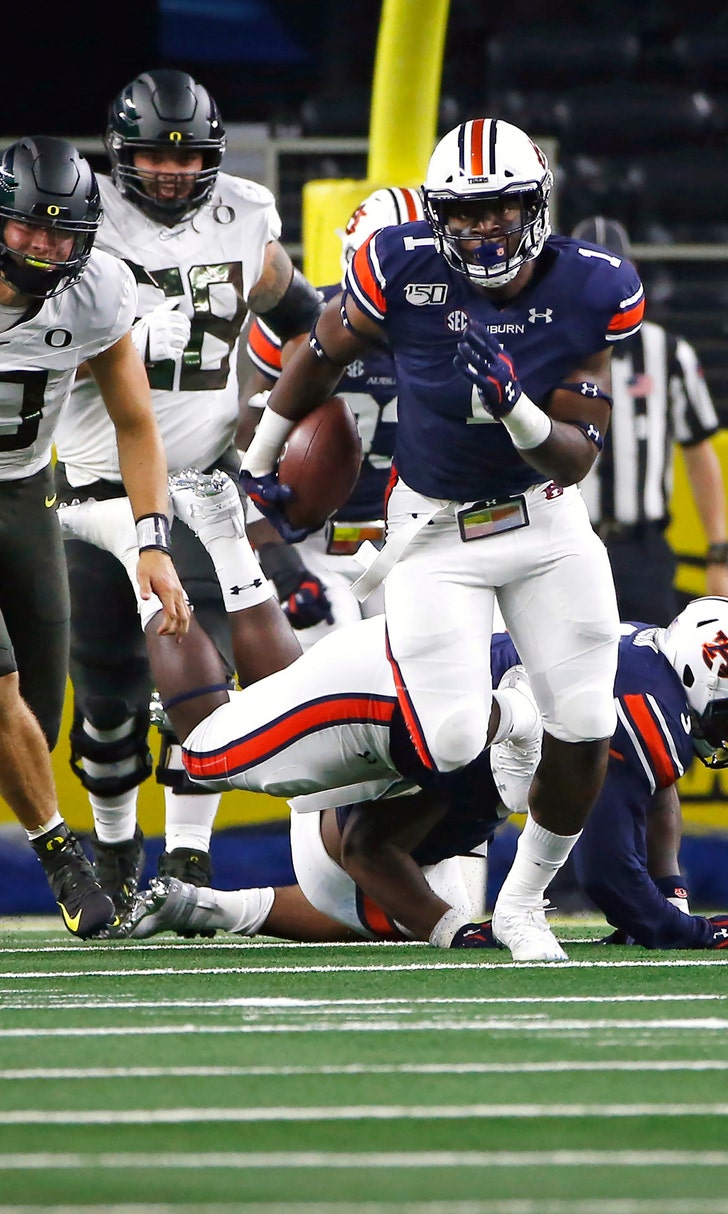 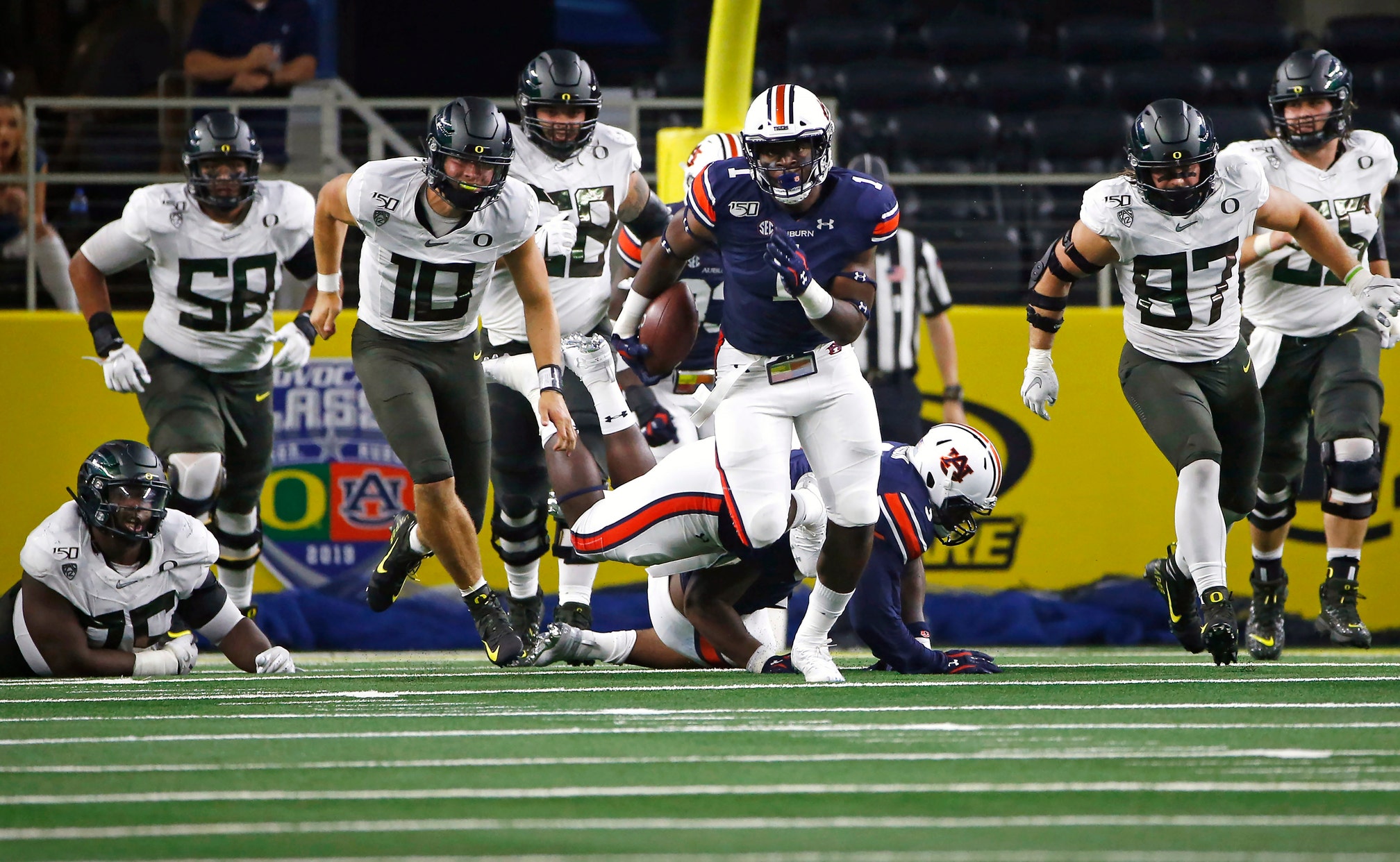 ARLINGTON, Texas (AP) — Bo always knows at Auburn, even a true freshman quarterback by that name.

After barely converting a fourth down with a gutsy run in the final minute, Bo Nix threw a 26-yard touchdown pass to Seth Williams with 9 seconds remaining as the 16th-ranked Tigers rallied for a 27-21 win over No. 11 Oregon on Saturday night.

"He has some savviness to him, there's no doubt," coach Gus Malzahn said of the young quarterback. "When the game is on the line, you've got to make plays, and that's the one thing he showed."

On fourth-and-3, Nix rolled to the right, then tucked and pushed forward. Only the nose of the ball, sitting at midfield, was past the chain when officials measured for a first down.

"Play of the game," Malzahn said.

And Nix wasn't done. On third-and-10 from the Oregon 39 and no timeouts, he hit Williams for 13 yards. The receiver got out of bounds with 16 seconds left, with Tigers already in field goal range. But the play-calling head coach wanted to give Williams the chance to make another play — and Nix delivered to put Auburn ahead for the first time.

The Tigers, who trailed 21-6 late in the third quarter, delivered another early blow to the Pac-12. They beat the Pac-12's highest-ranked team in a season opener for the second year in a row — No. 6 Washington lost to them 21-16 in Atlanta last year.

Nix finished 13-of-31 passing, four of those completions on Auburn's final drive, for 177 yards with two touchdowns and two interceptions. He also ran seven times for 42 yards, while Whitlow had 110 yards rushing on 24 carries.

Justin Herbert, who bypassed early entry in the NFL draft to return to Oregon, was 28-of-37 passing for 242 yards with a touchdown. He was under pressure when he threw across the field and hit Spencer Webb on a 20-yard score that made it 14-3 late in the first quarter.

Herbert wasn't on the field for a fourth-and-1 play with 5 1/2 minutes left, after banging his knee with a defender following a pass. After Herbert was tended to and came off the field, the Ducks called two timeouts — though those stoppages didn't allow Herbert to return at that point.

"The wrong personnel was in, and we got personnel straightened out, they weren't quite sure as to who was going to do what," Cristobal said. "As a coaching staff, that's on us. ... Trying to make pieces work for a certain play."

But it didn't work when CJ Verdell, who had a 1-yard TD run on the opening drive of the game, was stuffed for a 1-yard loss.

Auburn went three-and-out, but after Oregon got a quick first down, Herbert was sacked and the Ducks punted with just over 2 minutes left.

Nix threw an 11-yard TD pass to Eli Stove late in the third quarter. When the Tigers got to the 1 with just under 10 minutes left, Joey Gatewood — the redshirt freshman Nix beat for the starting job — came in, leaped from the 3 and over the line with the ball extended to make it 21-20 since Auburn kicked the extra point instead of trying for two.

"We brought back a play we used to run in 2010 with Cam (Newton)," said Malzahn, the offensive coordinator of that team that beat Oregon in the BCS championship game. "He looked pretty good going over the top with it."

Oregon: The Ducks had several chances to keep this game from being that close. Already up 7-0, Bryan Addison couldn't pull in a catch in the back of the end zone on their second drive right before Camden Lewis missed a 20-yard field goal. There was also an exchange of 80-yard returns in the second quarter. Jevon Holland had an 81-yard punt return to the Auburn 9, setting up a chance to go up 21-3. But Herbert fumbled on the next play. Defensive end Big Kat Bryant scooped it up and ran 83 yards to the Oregon 3, though the Tigers had to settle for a field goal.

Auburn: While Nix had some mistakes, like the sidearm throw into traffic that was picked off near the Oregon 10 in the second quarter, he made plays when the Tigers needed them and when starting his first game against one of the nation's best teams. His father and high school coach, Patrick Nix, played at Auburn from 1992-95.

Both Auburn and Oregon are Top 25 teams, but the Tigers should be the higher-ranked of the two in the next poll.

Oregon is home to play Nevada on Saturday night.