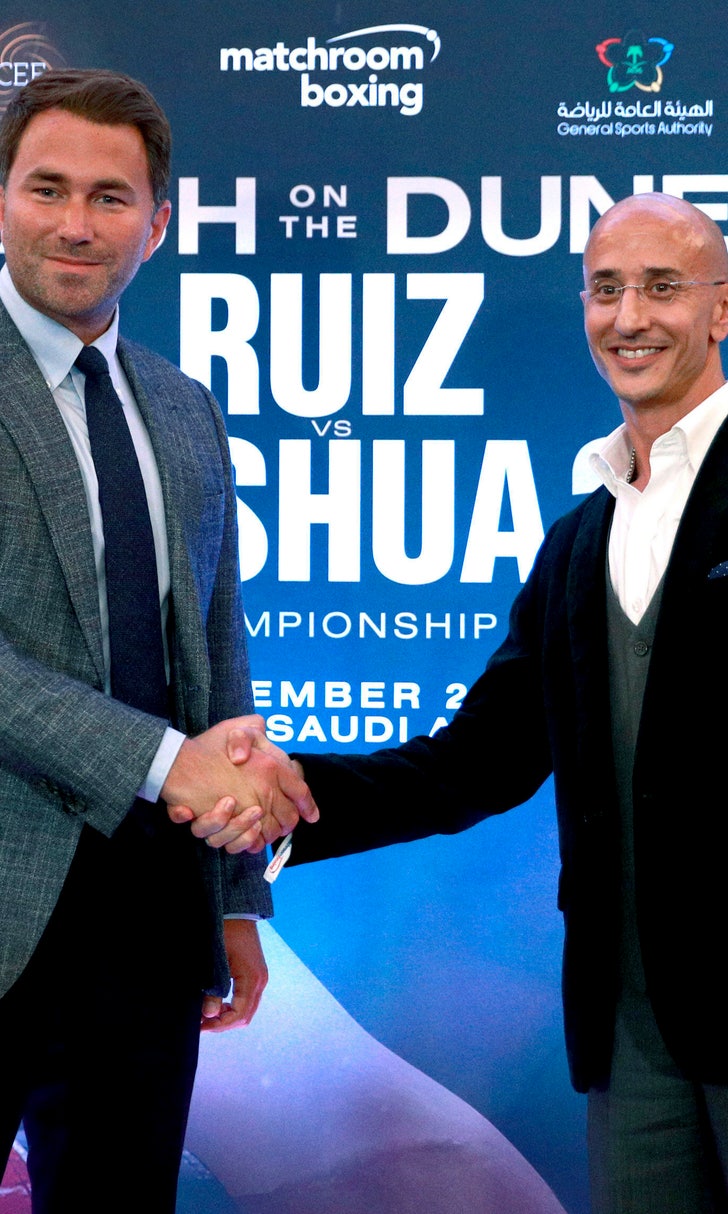 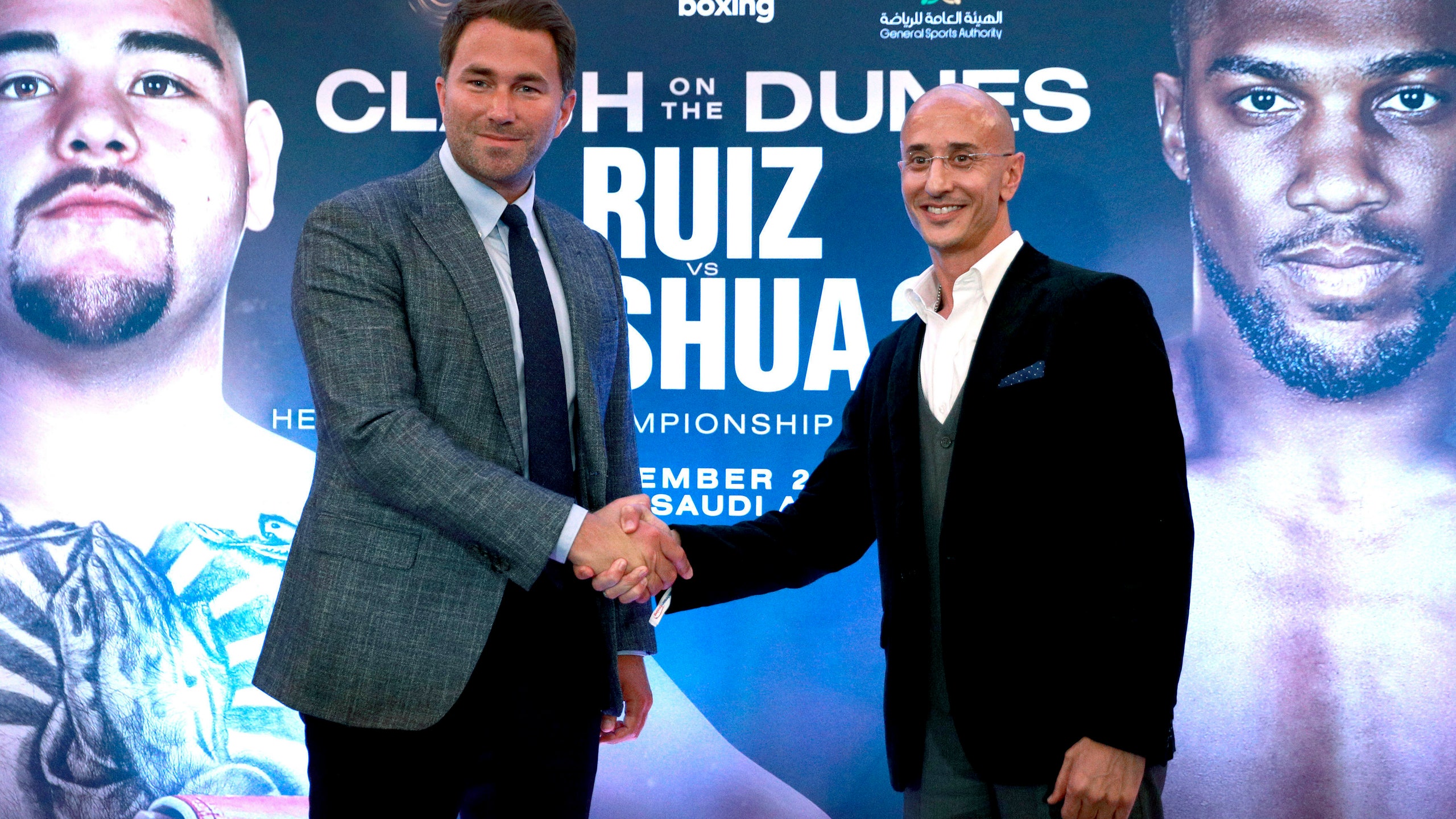 There's nothing new about those who make their living in sports chasing every dollar they can.

NFL owners do it every time they threaten to devastate a city by moving a team to greener pastures. Baseball does it by signing lucrative broadcast agreement that make it more expensive — and sometimes impossible — to follow the team you love.

So in a perfect world, what Eddie Hearn is doing with the big heavyweight fight in Saudi Arabia he is promoting isn't particularly groundbreaking or outrageous. It has a rich history in boxing, most notably when Muhammad Ali led a caravan to what was then Zaire during Mobuto Sese Seko's dictatorship to knock out George Foreman in a 1974 fight that will live forever as the "Rumble in the Jungle."

Somehow, "Clash on the Dunes" just doesn't have the same ring. And it's not a perfect world, particularly in a country noted for human rights abuses.

Unfortunately, Hearn just doesn't seem to get it when asked why — outside of the obvious answer of money — Anthony Joshua and Andy Ruiz Jr. will find themselves fighting their heavyweight title rematch on Dec. 7 in, of all places, Saudi Arabia.

Selling out to the highest bidder sometimes comes with a price of its own.

"That's well beyond my head as a sports organizer," Hearn said Monday in London as questions swirled about the propriety of holding the heavyweight championship of the world in a country that is at odds with the rest of the world in so many ways. He later added, "We knew the criticism we may face when we announced the fight."

It would be hard not to know. A quick glance at news sites not controlled by the Saudi government shows that despite recent relaxations on rules banning women from driving and attending sporting events, there are still reports of serious human rights abuses in the country. There are also questions about how high up in the Saudi government the plan to kill Washington Post columnist Jamal Khashoggi was put together.

But boxing promoters — actually, most people in sports — tend to gloss over those kinds of issues when there is money involved. And the Saudis, Hearn said, offered more money than could have been generated at the Principality Stadium in Wales — where Ruiz didn't want to fight — or at Madison Square Garden, where Ruiz scored a major upset over the previously undefeated Joshua in their June 1 fight.

Still, Hearn would have served himself better had he not tried to pretend he's merely a sportsman and that political things are too complicated for him to worry about.

If he needs a quick lesson, Amnesty International calls it "sportwashing," which basically means the use of big sporting events to burnish a country's image. And, no doubt, the rematch in a temporary outdoor stadium in Diriyah, on the outskirts of the capital, Riyadh, is a big event that would have drawn 80,000 rabid boxing fans in Wales.

Hearn said he was unfamiliar with the term. He came prepared with his talking points at hand, saying other organizations like the WWE, Formula One and golf's European Tour had staged successful events recently in the country.

They made money, so why shouldn't he?

Why, even women will be allowed inside the temporary 12,000-seat stadium. Isn't that progress enough?

The argument being made is that sports are different, sports should stand on their own and sports — even boxing — should somehow be pure. It's nonsense, of course, as evidenced when Russian President Vladimir Putin spent billions to host a tainted Olympics in Sochi and the Chinese did the same in 2008 to deliver the message they were a world power.

Ali and Foreman were used in Zaire, too, to try and show the world that Mobuto wasn't such a bad guy even as the dictator looted his impoverished country to pay for the fight.

Just how much the Saudis paid has not been revealed, though Hearn said it wasn't the $40 million some speculated. What they'll get for their money is an intriguing heavyweight rematch, though Hearn tries to sell it as far more.

"I think it's going to be mind-blowing for the sport of boxing," he said. "This could change boxing forever. This will be a boxing event that will go down in history."

It will, but probably for all the wrong reasons. The only vision Hearn has is the same vision that has ruled boxing for more than a century — pure greed.

This is a money grab, nothing more and nothing less.

Hearn would serve himself — and boxing — better if he owns that now.

Win with Super 6 on Dirrell-Davis bout
You can win $1,000 absolutely for free with Super 6 when Anthony Dirrell faces Kyrone Davis on Saturday night. Here's how.
February 26

Boxing World Reacts To Spence Jr.'s Win
Is Manny Pacquiao next for Errol Spence Jr.? The boxing legend was among those who shared their thoughts Saturday night.
December 6, 2020
those were the latest stories
Want to see more?
View All Stories
Fox Sports™ and © 2021 Fox Media LLC and Fox Sports Interactive Media, LLC. All rights reserved. Use of this website (including any and all parts and components) constitutes your acceptance of these Terms of Use and Updated Privacy Policy. Advertising Choices. Do Not Sell my Personal Info