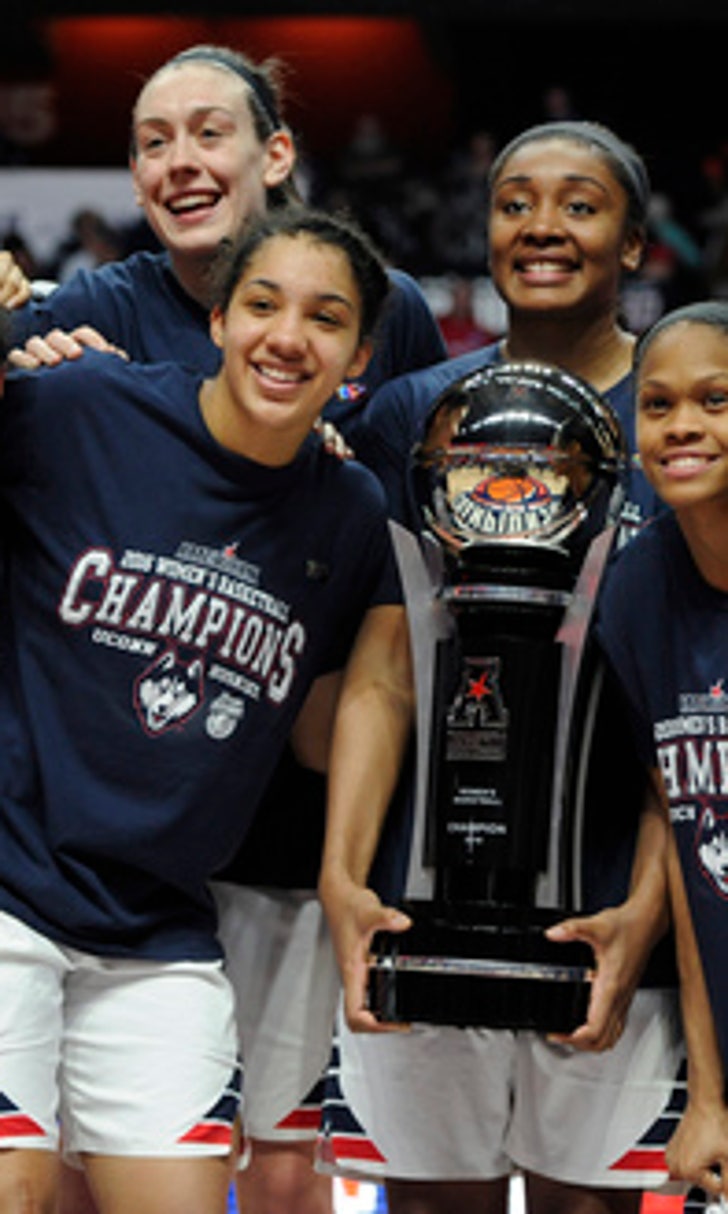 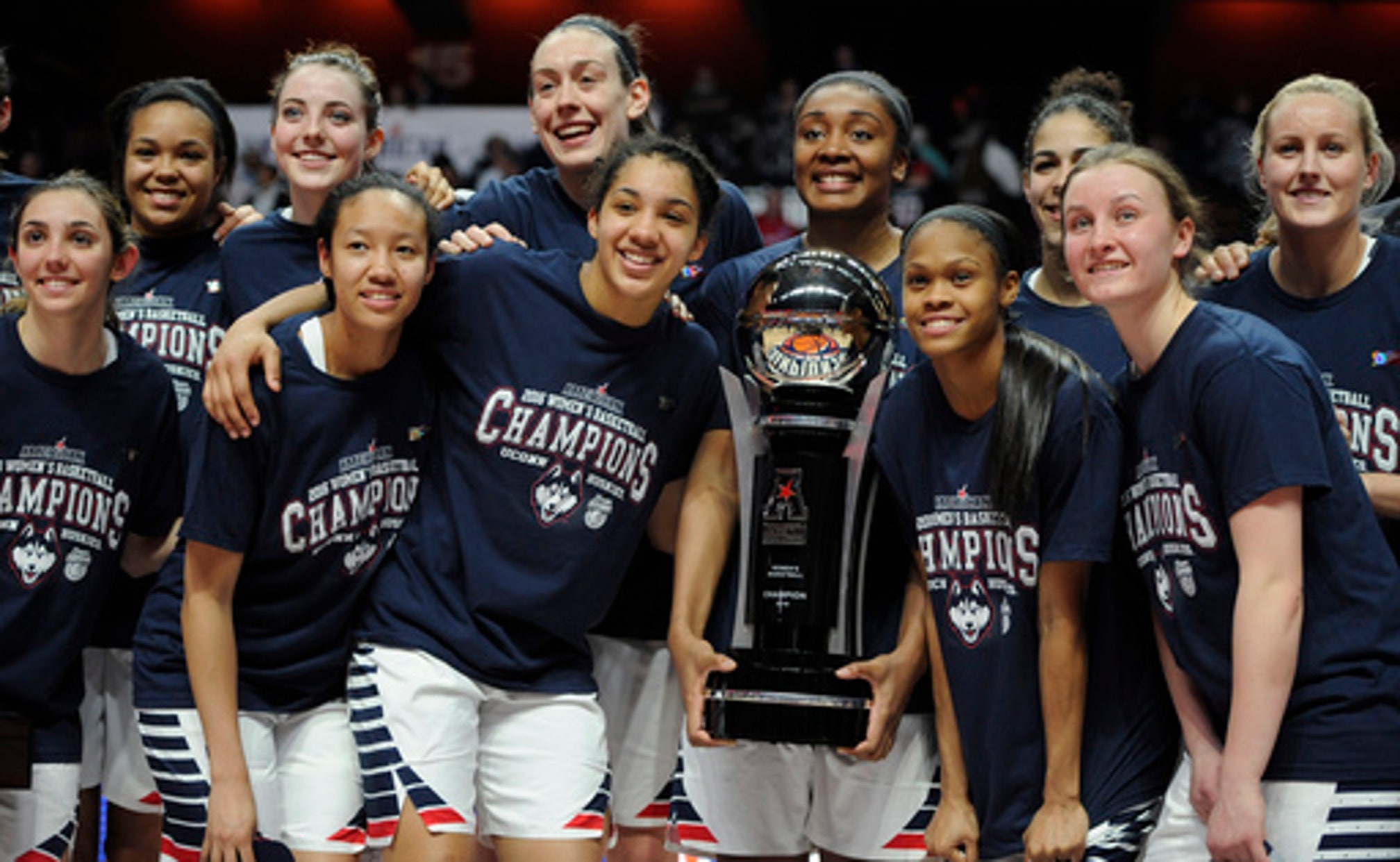 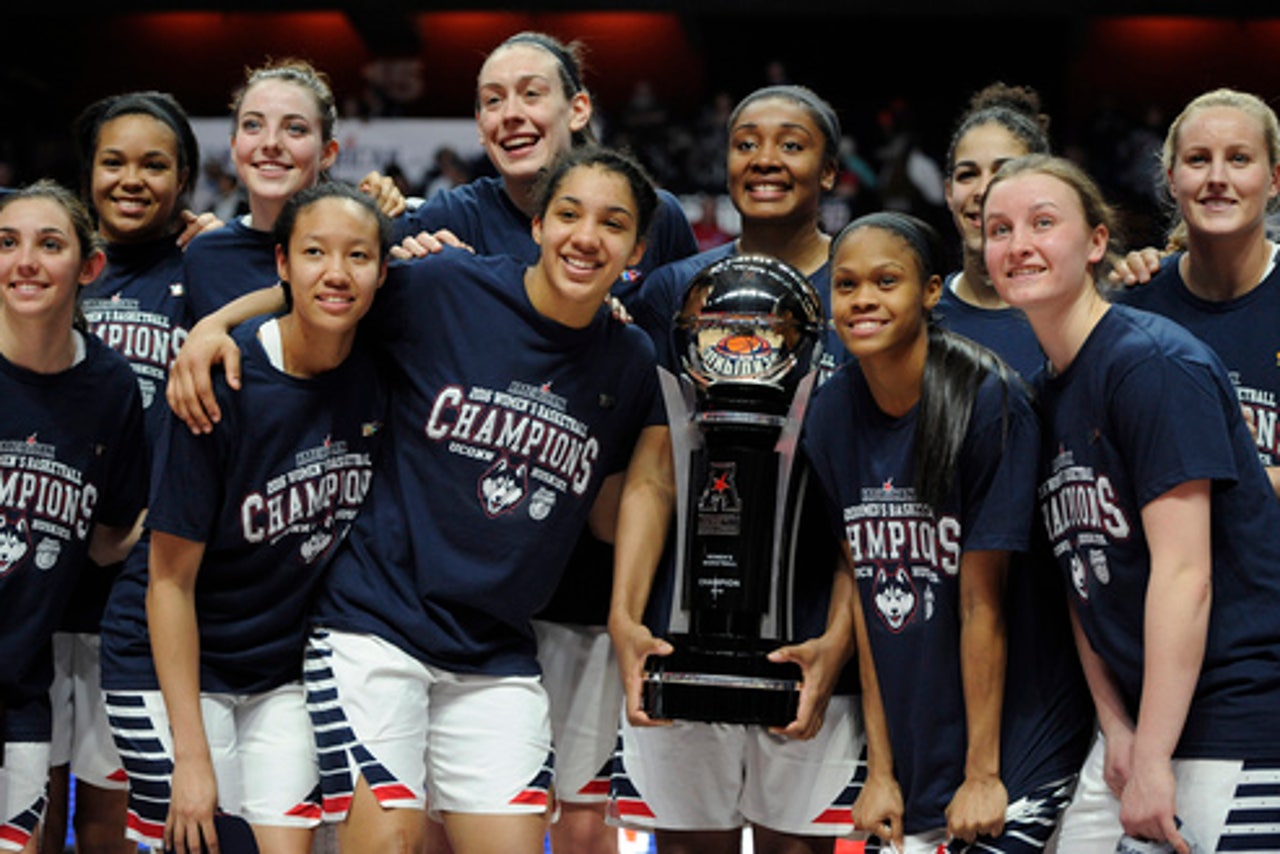 NEW YORK (AP) The next time the Huskies leave Connecticut they could be two wins from women's basketball history.

UConn's road to an unprecedented fourth straight national championship will begin at home.

The Huskies were the top overall seed in the women's NCAA Tournament that was revealed Monday night. UConn (32-0) won't have to leave the state until the Final Four in Indianapolis because it is in the Bridgeport Regional.

''I am kind of jealous of the people who get to play in Los Angeles,'' UConn's Morgan Tuck joked. ''I mean, Storrs is great, but L.A. is great, too.''

There is no doubt the Huskies have been great over the past three seasons, winning the title every year. Coach Geno Auriemma said they don't focus on what lies ahead.

''They know obviously that this is an opportunity for them to win the fourth national championship. They know that,'' he said. ''And they've known it since the first time we met at halfcourt there for the first day of practice. The only other time it has been mentioned is in passing when they do something stupid and I say, `Teams that are trying to do something great, they don't do that stuff, not in March.'''

Joining the Huskies as the other No. 1 seeds are South Carolina, Notre Dame and Baylor. UConn has already beaten the Gamecocks and Irish this season. The Huskies would face Baylor on April 3 in the national semifinals if both teams advance that far.

UConn and Tennessee have both won three straight women's titles, but no women's team has four consecutive championships. The UCLA men's team won seven in a row. A title this year would give Auriemma 11 in his career, breaking a tie with celebrated UCLA men's coach John Wooden.

First up for the Huskies, who have been a No. 1 seed for 10 straight years, is 16th-seeded Robert Morris. The Colonials won the NEC championship.

The top four seeds in each region will host the opening two rounds except for No. 4 Michigan State, which has a conflict. So fifth-seed Mississippi State will take over as the host.

Tennessee earned a No. 7 seed, the lowest in school history. The Lady Vols, who have played in every NCAA Tournament, will face Green Bay in the opening round at Arizona State.

''Is it where we usually are? No, but it's a great spot for us to go to work,'' Tennessee coach Holly Warlick said.

While Tennessee has to head west, fourth-seeded Stanford could be heading east. Tara VanDerveer's team hosts former player Jennifer Azzi and her San Francisco program in the opening round. If they can advance to the Sweet 16, the Cardinal will play in Kentucky. The third-seeded Wildcats won't have to leave the area until the Final Four. They host the opening two rounds and then would play in Rupp Arena for the regional.

''For our team to work hard enough and be able to earn a top-16 seed and host in Memorial Coliseum is great,'' Kentucky coach Matthew Mitchell said. ''So they had to earn that and I am grateful the committee put us in Lexington. We are going to have to really work hard to get a victory in the first round, but the prospects to get to play in Lexington for the Sweet 16 is exciting.''

Tennessee, Kentucky and South Carolina are three of nine SEC teams to make the field. That ties the Big East (2011) for the most ever in the women's tournament.

Other notables from the bracket:

TWO-BID IVY LEAGUE: Days after announcing the first Ivy League postseason tournament, the league earned the first at-large bid for either a men's or women's team with Princeton getting an 11 seed. The Tigers, who will face West Virginia, lost to Penn twice during the regular season - their only conference blemishes.

Penn is a No. 10 seed and will face Washington in the opening round.

NEWCOMERS: Duquesne headlined five first-time NCAA Tournament teams. The ninth-seeded Dukes are the only at-large team of the group and open up against Seton Hall. Other newcomers include Buffalo, Central Arkansas, Iona and Jacksonville.

GOODBYE TOBACCO ROAD: For the first time since 1988, Duke, North Carolina and N.C. State all missed the tournament. The Blue Devils, who had been in the tournament the past 21 years, were on the bubble to get in.

LEFT OUT: Iowa, N.C. State, Ohio and UTEP were the first four teams left out of the field, according to the NCAA. Princeton, Missouri, Purdue and St. Bonaventure were the last four in.

''I think the toughest decision with the first four out was that there was a large group of teams looking a lot alike,'' NCAA women's basketball committee chair Chris Dawson said. ''Each team had their own merits. Through our vetting and voting process we came up with the last four I mentioned.''

DOUBLE DUTY: There are 24 programs that have both their men's and women's teams in the NCAA bracket, including women's top seeds UConn, Notre Dame and Baylor.