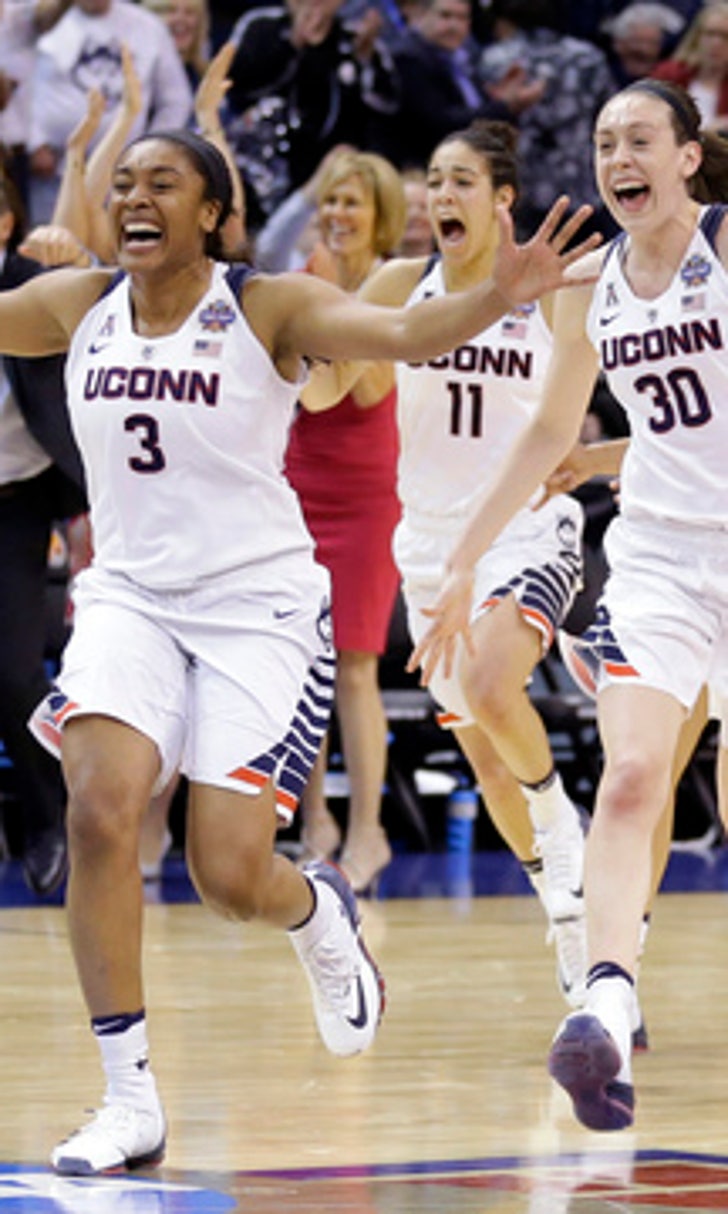 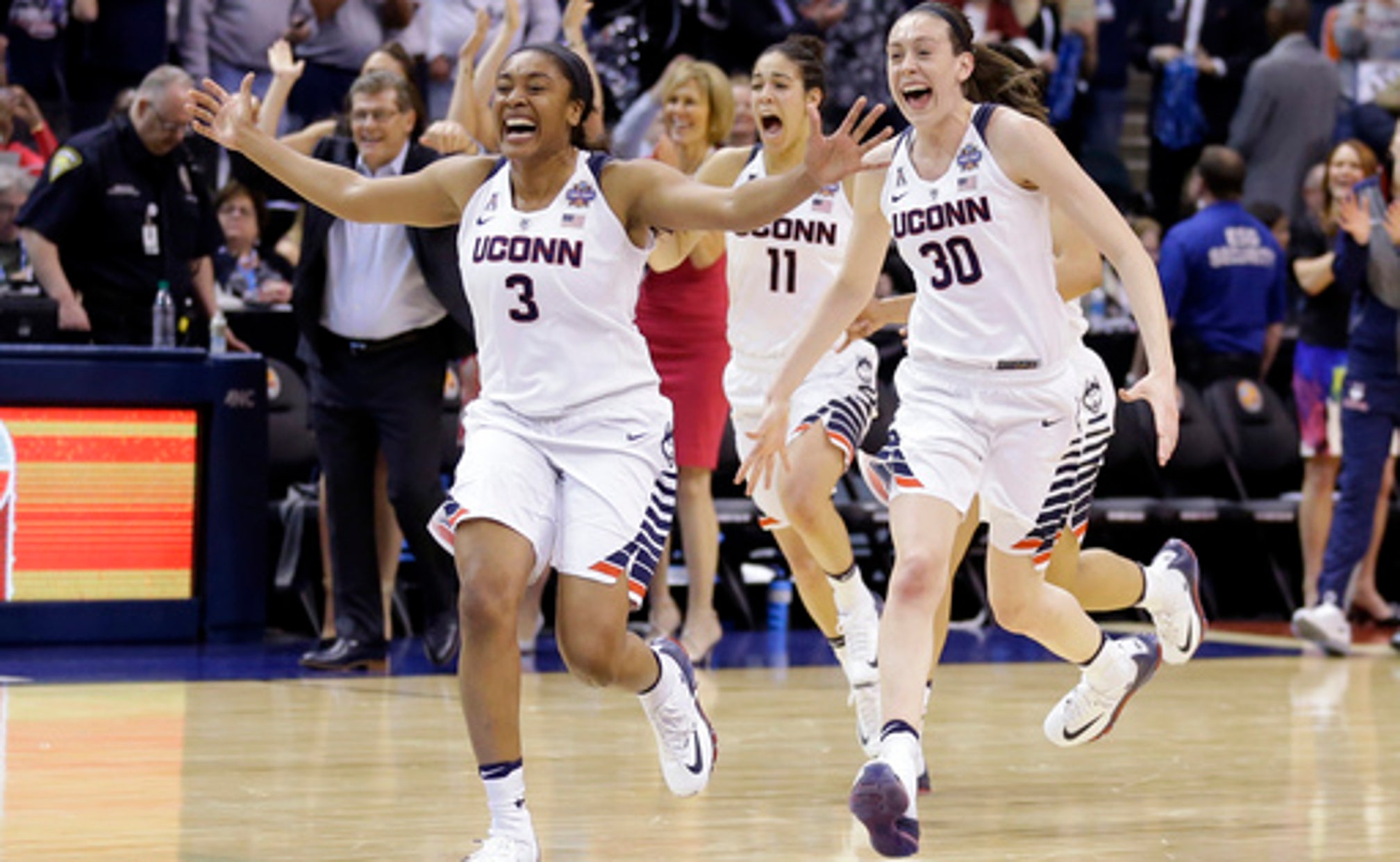 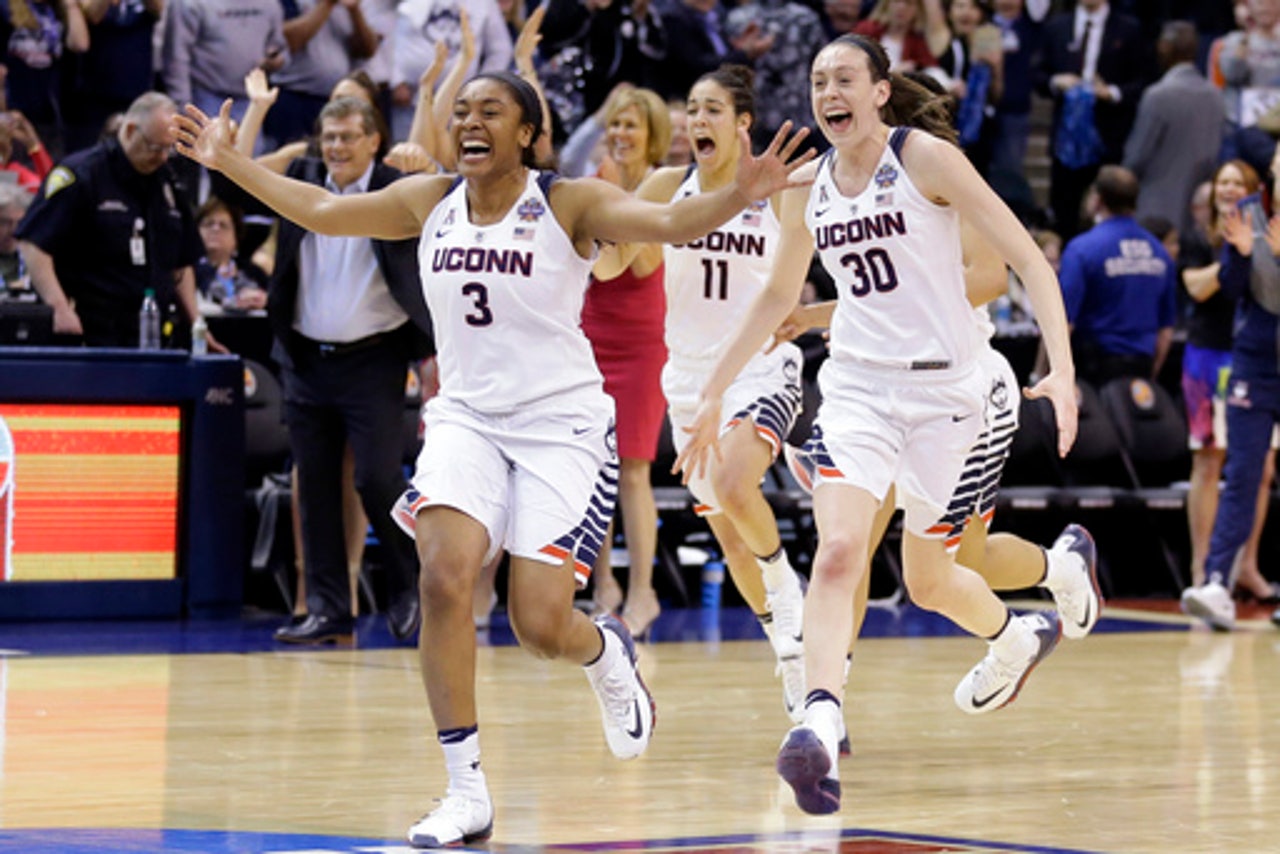 Connecticut senior Breanna Stewart capped off her brilliant career with a fourth straight national championship - a feat never accomplished before in Division I women's basketball.

''It was the perfect ending,'' Stewart said. ''We had a goal coming in as freshmen and now as seniors we did that. We did what we wanted to do. It was a lot of fun.''

The 82-51 win over Syracuse on Tuesday night finished another flawless season for Geno Auriemma and his Huskies. Until now, only the UCLA men's team had won four in a row in D-I, rolling to seven consecutive championships under John Wooden from 1967-73.

And now Auriemma has passed the Wizard of Westwood with his 11th national title.

''What those 11 championships mean to me is how many great players I've had the opportunity to coach,'' Auriemma said. ''How many great people have come through the program. It doesn't matter whose name is above, or whose name I'm under. As long as I have those players in my memory, I'm good.''

The three-time AP Player of the Year has said it is up to others to decide her place in women's college basketball lore. There is no denying she is the most accomplished player ever, winning more titles than fellow UConn greats Diana Taurasi and Maya Moore, who watched from the stands at Bankers Life Fieldhouse. Auriemma wouldn't argue with the description of Stewart as the best ever.

`I'll say this. She's the greatest NCAA Tournament player I've ever been around,'' Auriemma said. ''When the lights were the brightest, that's (when) she was at her best.''

Stewart said when she came to campus four years ago that she wanted to win four titles. She delivered on that promise by scoring 24 points and grabbing 10 rebounds. She and fellow seniors Morgan Tuck and Moriah Jefferson posed on a ladder after cutting down the net for the final time.

Mission accomplished. The three went 24-0 in NCAA tourney games, too.

''It wasn't a sense of relief, it was a sense of success. This is exactly what we wanted,'' Stewart said. ''Going into every one of our national championship runs, we were confident and that's what we were tonight, confident. We made history and to be able to say that we did that with those two guys, we're going to remember that forever.''

The Huskies (38-0) have been nearly unbeatable since Stewart arrived. They lost four games her freshman year and only one since. The win over Syracuse was the 75th straight for UConn, all by double figures.

Stewart earned the most outstanding player of the Final Four all four years of her career. No other women's player has won it more than twice and only Lew Alcindor did it three times on the men's side.

Like the other great UConn teams, this version had a killer instinct. The Huskies scored the first nine points of the game and UConn built a 23-6 lead. Stewart, Jefferson and Tuck, who have helped the Huskies to an NCAA-record 151 wins over four years, combined for 26 of the 28 points in the opening quarter.

Handling the Orange's press with precision passing that led to easy layups, the Huskies were up 50-23 at the half and extended their lead to 33 early in third quarter before Syracuse scored 16 straight points to get within 60-43 with 2:02 left in the period that brought the Orange fans to their feet. Consecutive layups by Napheesa Collier restored the 20-plus point lead and UConn cruised from there.

''Not shocked by how good they are, not shocked by the things they did in the game. We were definitely prepared for it,'' Syracuse coach Quentin Hillsman said. ''We didn't play scared.''

Stewart, Tuck and Jefferson left the game for good with 1:46 left, sharing an embrace together before hugging Auriemma. The trio then went down the bench hugging every member of the team.

''There's three key ingredients that go into this kind of success, `One, two, three,''' Auriemma said afterward, pointing to his three seniors.

Auriemma certainly knows the recipe in the NCAA title game, going a perfect 11-0. This one gave the Hall of Fame coach a sixth undefeated season.

''He pushed us to levels that we didn't know we could even reach or play at,'' Stewart said. ''And once we bought into that, it was a great journey to be on.''

Fourth-seeded Syracuse (30-8) had the best season in school history, advancing to its first NCAA championship game. They hadn't made it out of the first weekend of the tournament until this year and wound up making a run all the way to the title game. They ran into the Huskies and Stewart, who is from the Syracuse area.

''I'm really happy for Breanna Stewart, who came to one of my camps,'' Hillsman said. ''She's a great player.''

With Lubbock Christian and Thomas More finishing off their undefeated seasons Monday night in the Division II and III title games, this marks the third year that all three champions didn't have a loss. It also happened in 1995 and 2014 - and UConn won the D-I titles those years, too. Lubbock Christian and Thomas More players held the flag during the national anthem before the game.

Syracuse: The Orange had been stellar in the tournament from behind the 3-point line. They came into the game after making 48 3-pointers, averaging nearly 10 a game, and were shooting 33.6 percent from behind the arc. In the title game, they were just 2 for 19.