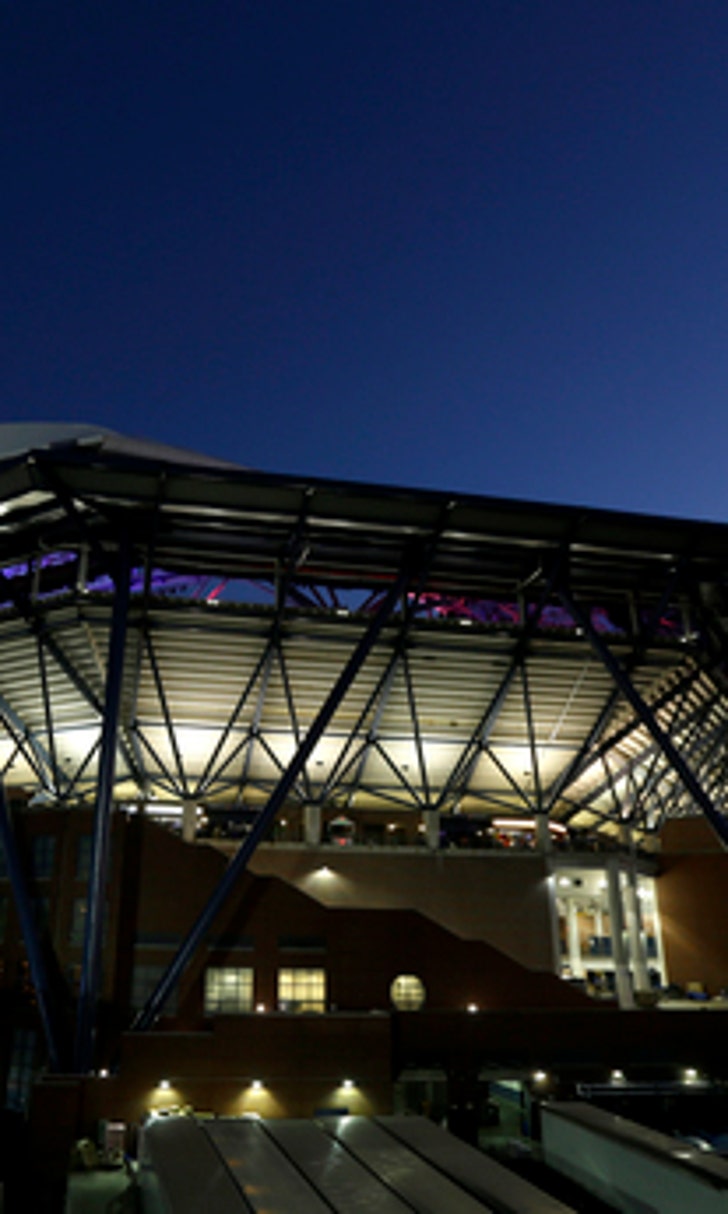 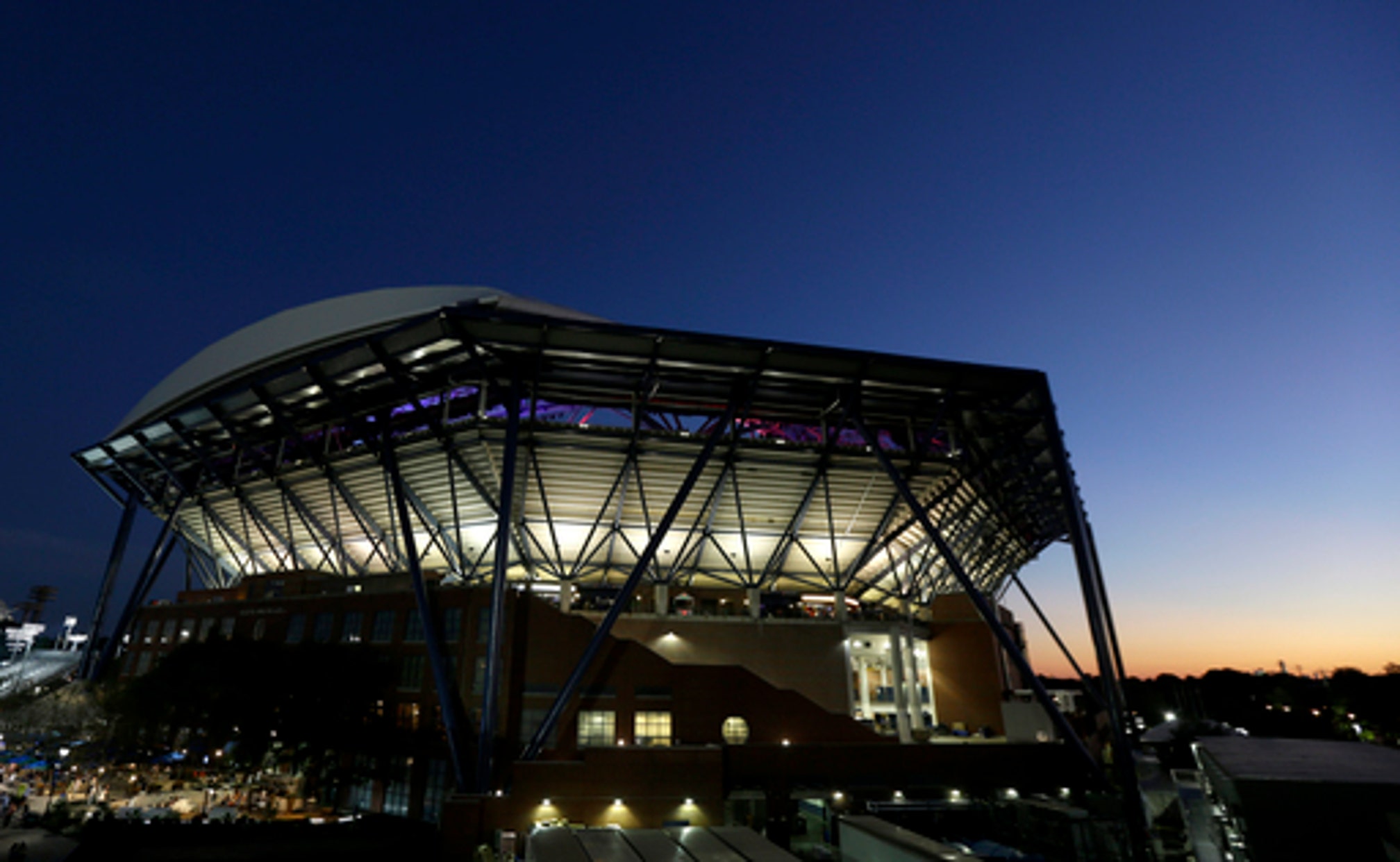 The Latest: Steve Johnson rallies for 5-set win at US Open 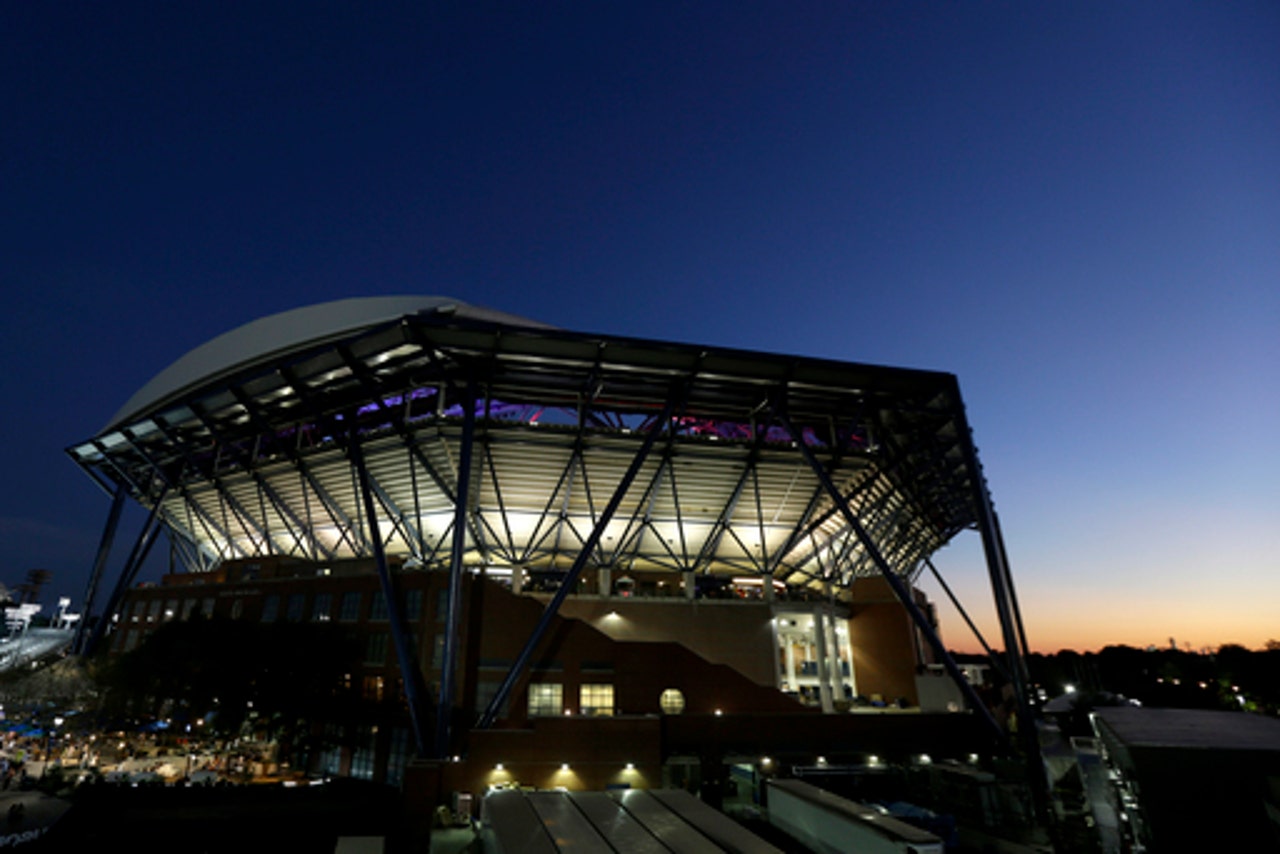 American Steve Johnson rallied from down two sets and a break to move on to the second round at the U.S. Open.

Donskoy, ranked 79th, served for the match in the third set, and then had two match points on Johnson's serve three games later.

Johnson, who lost in the first round at his last three U.S. Opens, routed Donskoy 6-1, 6-1 at the Olympics less than three weeks earlier. It was his second career comeback from down two sets.

He had 54 unforced errors in the first three sets and 20 in the last two. Johnson next faces 2009 U.S. Open champ Juan Martin del Potro.

Serena Williams' serve was in fine form in a routine first-round win over Ekaterina Makarova at the U.S. Open.

The top-seeded Williams had played just three singles matches since Wimbledon because of a sore right shoulder, but it didn't show as she hit 12 aces, with only one double-fault, in a 6-3, 6-3 victory Tuesday in 63 minutes.

It was a potentially tricky draw for Williams as she opened her bid for a record 23rd major title. Makarova is a two-time Grand Slam semifinalist who just missed a seed.

In the latest outburst by Bernard Tomic, the Australian muttered at a heckler during his U.S. Open match that he was going to perform a lewd act on that person.

Tomic said after his first-round loss Tuesday that he apologized to the fan afterward. He added, though: ''He definitely baited me the whole set for me to say that. But I do apologize if there were people around that heard. That's all I can say.''

The vulgar comments came during the first set as Dzumhur was trying to serve. Tomic later claimed he didn't remember what the heckler was saying to him.

Tomic, 23, has attracted plenty of controversy on and off the court. He has been accused of tanking matches and suspended from Australia's Davis Cup team and had multiple run-ins with police. His father, who serves as his coach, was given an eight-month suspended sentence and banned from the ATP Tour for a year in September 2013 for assaulting his son's former hitting partner.

Del Potro is ranked just 142nd and needed a wild card to get in. But he proved with his unexpected silver medal at the Olympics that he can contend again.

In his first match since losing to Andy Murray in four grueling sets in the final in Rio, del Potro showed few ill effects of his emotionally and physically draining run there.

Schwartzman is ranked 73 spots better than del Potro right now, but he's never been in the top 50 or advanced past the second round at a major.

Williams led 5-2 in the third set, but the 22-year-old Kozlova pushed her to the limit in the 2-hour, 42-minute match.

Third-seeded Stan Wawrinka advanced to the second round of the U.S. Open with a straight-set win.

The two-time major champion beat Fernando Verdasco 7-6 (4), 6-4, 6-4 on Tuesday despite more unforced errors than winners (37-30). He saved all four break points he faced, while converting two of his five chances, which was just enough for the victory.

The 32-year-old Verdasco is a former top-10 player, but he hasn't been to a major quarterfinal since 2013.

The 19-year-old qualifier won 4-6, 7-5, 6-4, 6-0 in the first round of the U.S. Open on Tuesday for his first victory at a major. He had lost in straight sets in his two previous Grand Slam matches, both at Flushing Meadows. Donaldson is ranked a career-best 122nd.

American Sam Querrey couldn't build on his upset of Novak Djokovic in his next Grand Slam.

The 29th-seeded Querrey lost to Janko Tipsarevic 7-6 (4), 6-7 (0), 6-3, 6-3 in the first round of the U.S. Open on Tuesday. It was a tough opening matchup for Querrey - Tipsarevic is a former top-10 player whose ranking is down to 250th after a series of injuries. A two-time quarterfinalist at Flushing Meadows, Tipsarevic got in on a protected ranking.

Querrey stunned the top-ranked Djokovic in the third round at Wimbledon en route to his first major quarterfinal. But in six of his past eight Grand Slams, he's lost to a lower-ranked opponent in the first round.

He's also dropped seven of his past eight meetings with Serbian opponents - the only win that upset of Djokovic at Wimbledon.

The 2011 U.S. Open champion needed three sets against Giorgi, who had an ace to win the second-set tiebreaker. But the 67th-ranked Giorgi got off to a slow start in the third, with Stosur taking a 4-0 lead in the deciding set.

Giorgi capitalized on only 3 of 14 break-point opportunities. She won 15 of 20 net points, but finished with 45 unforced errors.

Stosur will next face Zhang Shuai, who defeated Ellen Perez 6-1, 6-1.

Rio Olympics bronze medalist and 2014 U.S. Open runner-up Kei Nishikori has avoided what would have been his fourth first-round exit in his past six appearances at Flushing Meadows.

Nishikori, who earned Japan's first Olympic tennis medal since 1920 a little more than two weeks ago, advanced in New York on Tuesday by beating Benjamin Becker 6-1, 6-1, 3-6, 6-3.

The sixth-seeded Nishikori reached his first Grand Slam final at the U.S. Open two years ago, losing to Marin Cilic at that stage. But he exited in the first round in 2011, 2013 and 2015.

Becker, a German who won on NCAA singles title at Baylor University, has lost his past 15 matches against opponents ranked in the top 10.

Ana Ivanovic is out of the U.S. Open in the first round for the second straight year after a 7-6 (4), 6-1 loss to Denisa Allertova of the Czech Republic.

Ivanovic is a former No. 1 player and 2008 French Open winner who has slipped to No. 31 in the rankings.

The Serb was serving for the first set at 6-5 but struggled with her serve and faltered in the tiebreaker. She finished with seven double-faults and 41 unforced errors.

At the Open, she has reached the fourth round or better five times, including a career-best quarterfinal run in 2012.

The 89th-ranked Allertova improved to 7-1 in first-round matches in majors, making her second main-draw appearance at the Open.

Simona Halep gave herself ''less than 9'' for her quick work against Kirsten Flipkens, 6-0, 6-2, in the first match on Arthur Ashe Stadium.

The Romanian was ahead 6-0, 5-0 with countrywoman Nadia Comaneci cheering her on. Comaneci was the first gymnast to score a perfect 10 at the 1976 Montreal Olympics.

Halep says she wasn't perfect, but pleased with how she played against the Belgian. She got 69 percent of her first serves in and won 12 of 15 points at the net.

Halep, who reached the semifinals of the U.S. Open last year, will next face Lucie Safarova, a 6-4, 6-4 winner over Daria Gavrilova.

Venus and Serena Williams are among the featured matches on Arthur Ashe Stadium at the U.S. Open.

Venus will take on Kateryna Kozlova of Ukraine in the afternoon Tuesday before her top-ranked sister plays Ekaterina Makarova of Russia in the night match at the stadium with the new retractable roof.

Serena has been bothered by a shoulder injury, playing only three matches since winning Wimbledon for her 22nd Grand Slam title. She faces a tough opening opponent in Makarova, who beat her at the 2012 Australian Open.

Kirsten Flipkens of Belgium and Simona Halep of Romania have started play on Ashe, followed by Fernando Verdasco of Spain against Stan Wawrinka of Switzerland.

Andy Murray of Britain will face Lukas Rosol of the Czech Republic in the other evening match.