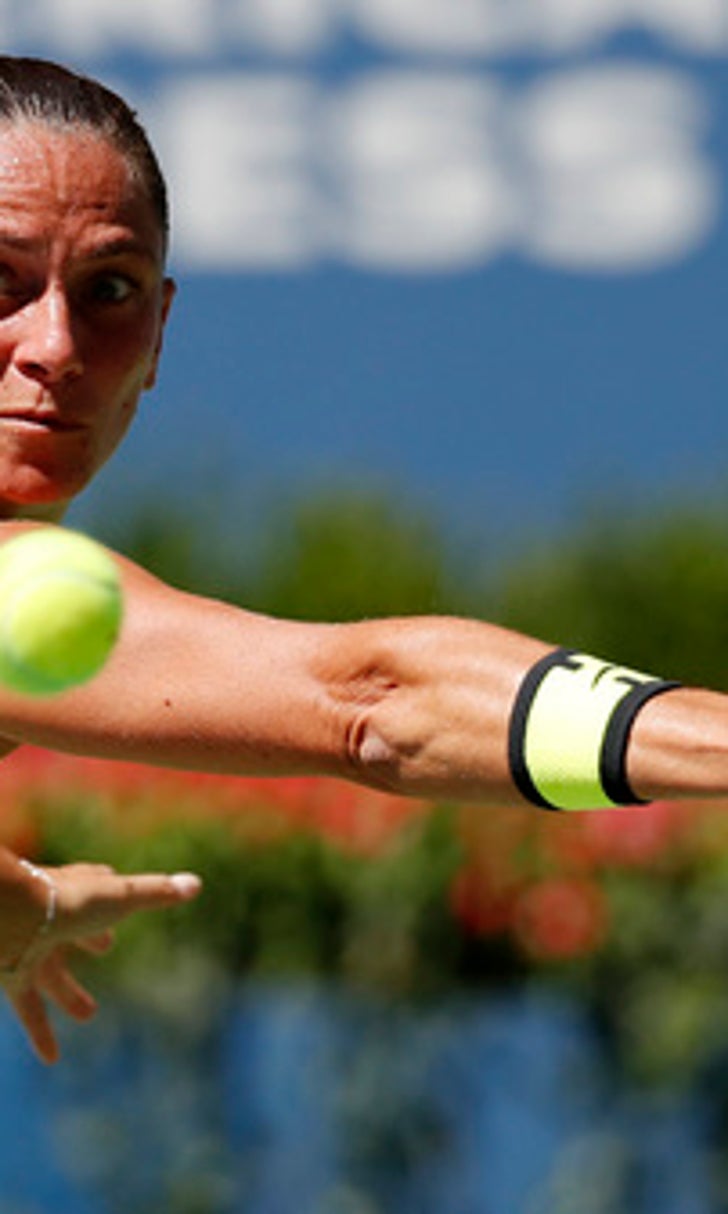 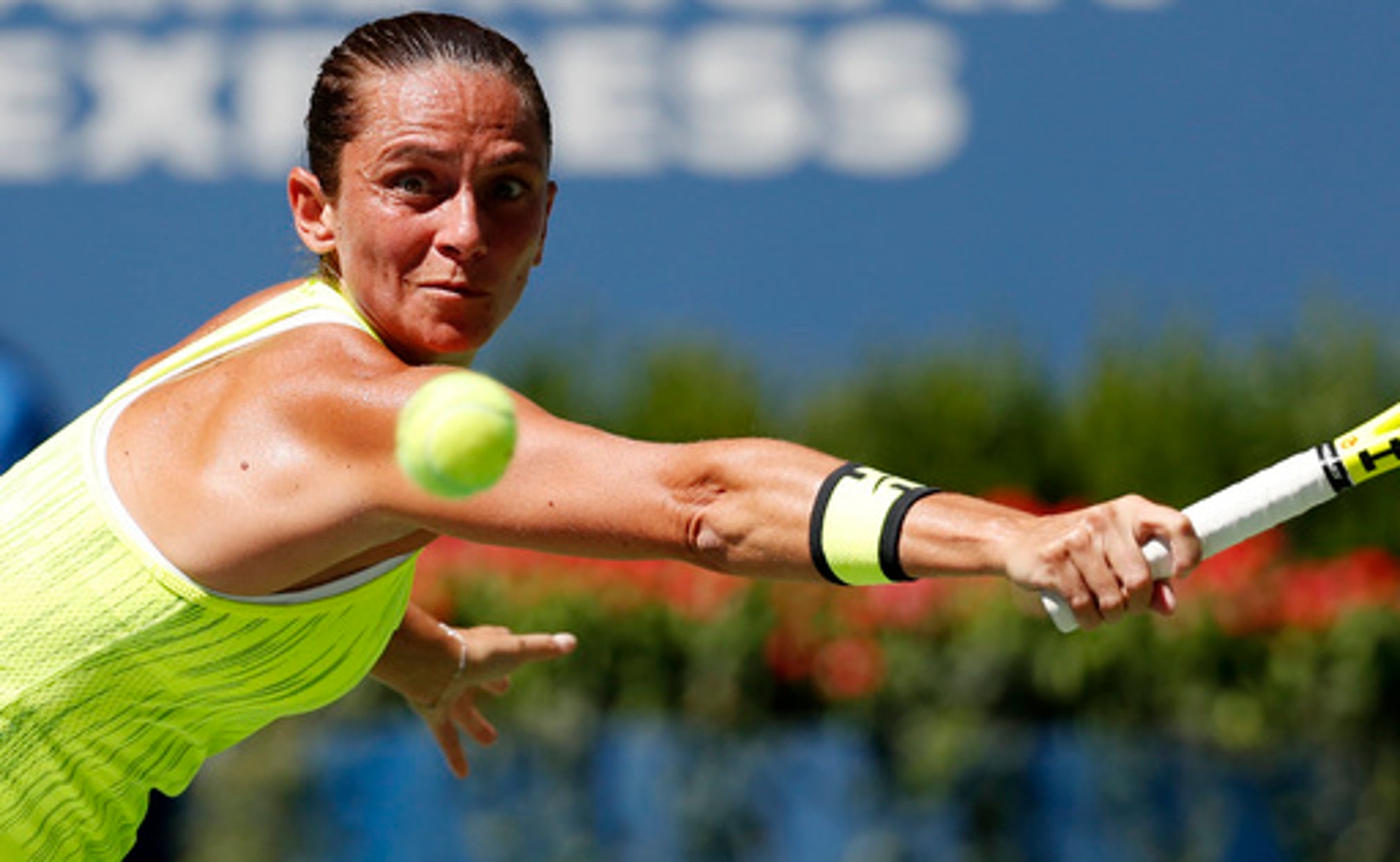 Djokovic's right arm gives him trouble during US Open win 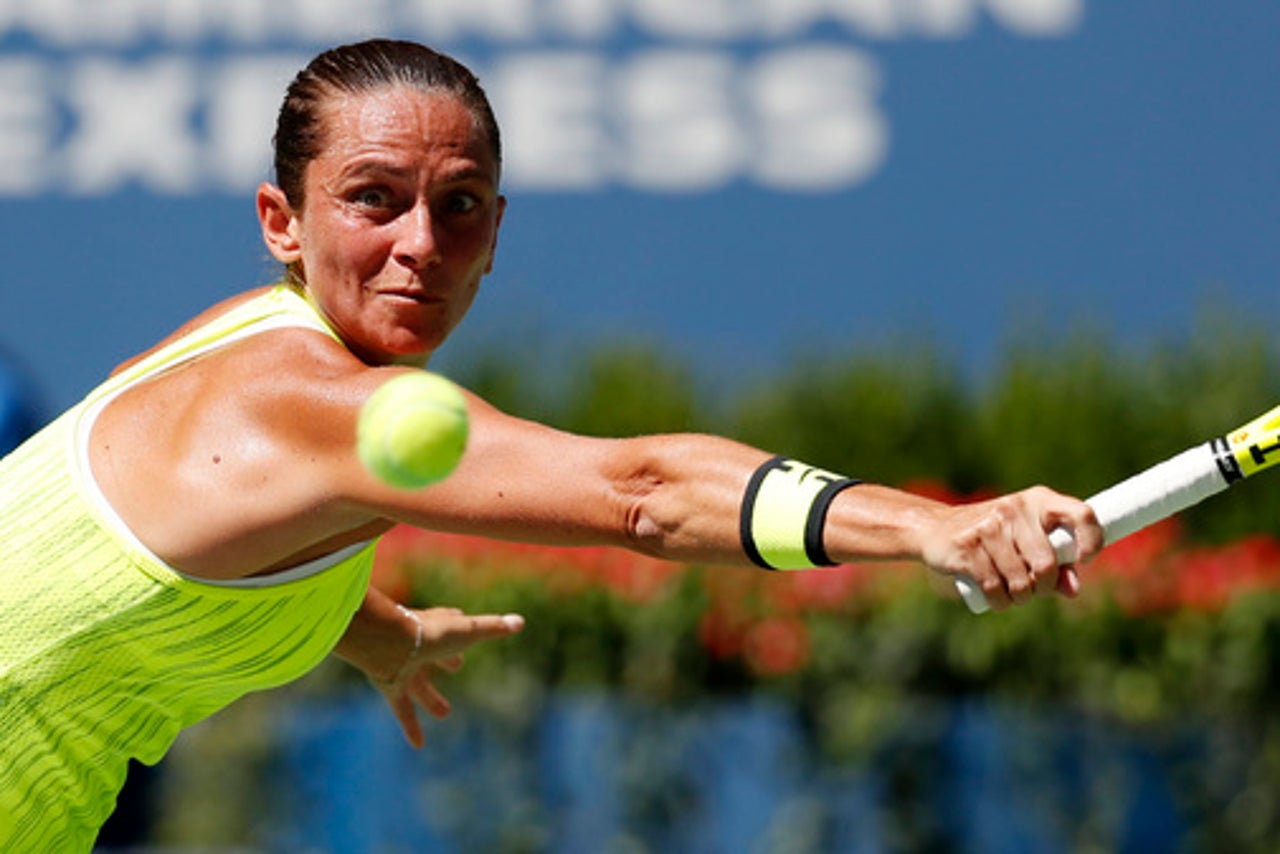 Seconds later Monday night, a weak serve produced a wince from the U.S. Open's defending champion, then was followed by a missed forehand that gave away a set - the first set dropped by Djokovic in the first round of any Grand Slam tournament since 2010.

While he managed to emerge with a 6-3, 5-7, 6-2, 6-1 victory over Jerzy Janowicz of Poland, there were plenty of signs of trouble, starting with a visit from a trainer who massaged Djokovic's bothersome arm after only five games.

Asked about his health during an on-court interview, Djokovic deflected the question, saying, ''I don't think it's necessary to talk about this now. I'm through. I'm taking it day by day.''

When the subject arose at his news conference, Djokovic again avoided addressing the topic, saying the trainer's visit ''was just prevention; it's all good.''

During the match, Djokovic hit first serves around 100 mph, sometimes slower - 25 mph or so below what's normal for him. He hit second serves in the low 80s mph. He flexed that right arm, the one he has used to wield a racket on the way to 12 Grand Slam titles, and appeared generally unhappy, covering his head with a white towel at changeovers.

Djokovic's coach, Boris Becker, gnawed on his fingernails, looking nervous as can be.

All in all, Djokovic's issues figure to loom large as the tournament progresses, and therefore were the most noteworthy development on a Day 1 at Flushing Meadows that did include drama elsewhere.

There was 20th-seeded John Isner's comeback from two sets down to edge 18-year-old Frances Tiafoe before a rowdy, standing-room-only crowd at the new Grandstand. And 26th-seeded Jack Sock's five-set victory over 18-year-old Taylor Fritz in another all-American matchup.

More, too: A first-round loss by Rio Olympics gold medalist Monica Puig, and French Open champion Garbine Muguruza's complaints about having trouble breathing after dropping the first set of a match she would go on to win in three.

This was the No. 1-ranked Djokovic's first match at a major since losing to Sam Querrey in the third round of Wimbledon, which ended the Serb's bid for a calendar-year Grand Slam after titles at the Australian Open and French Open. It was also his first victory since the second round at the All England Club, because he exited the Rio Olympics by losing his opener, then sat out the Cincinnati Masters because of a sore left wrist.

''After all I've been through in last couple of weeks, it's pleasing, of course, to finish the match and win it,'' said Djokovic, who lost to his next opponent, Jiri Vesely, at Monte Carlo in April. ''Look, each day presents us some kind of challenges that we need to overcome, accept and overcome.''

The wrist appeared to be just fine against Janowicz, a former top-20 player who reached the semifinals at Wimbledon in 2013 and is now ranked 247th after his own series of injuries.

Earlier in Arthur Ashe Stadium, Rafael Nadal stood near the net after winning his first Grand Slam match in three months - 6-1, 6-4, 6-2 against Denis Istomin - and unraveled the thick wrap of white tape protecting his all-important left wrist. He said he's still not back to hitting his forehand the way he does when he's at his best.

Nadal's afternoon match was played with the new $150 million retractable roof open under a blue sky, while offering some extra shade on a day when the temperature reached 90 degrees.

The good news for Nadal, he said afterward, is that the pain is gone from his wrist, which whips those violent, topspin-heavy forehands that are the key to his success - 14 of his 21 winners came off that wing.

The bad news for Nadal?

He still is working on feeling comfortable hitting down-the-line forehands, in particular, after sitting out - not just zero real matches, but barely any practice, either - from his withdrawal at the French Open in late May to the Olympics.

''Not easy to go 2+ months out of competition, in the middle of the season, without hitting a forehand,'' Nadal said. ''I need to have the confidence again with my wrist.''

Both Nadal and his coach, Uncle Toni, described the way Rafael changed the way he hits a forehand during the Rio Games to try to avoid pain.

Both said things are improving.

Istomin, ranked 107th, was not likely to give Nadal much of a test. So what did he think of Nadal's play Monday?

''For the first set, I was feeling that he was not hitting hard,'' Istomin said. ''A lot of short balls.''

Nadal's summation of his day: ''Not very good; not very bad.''