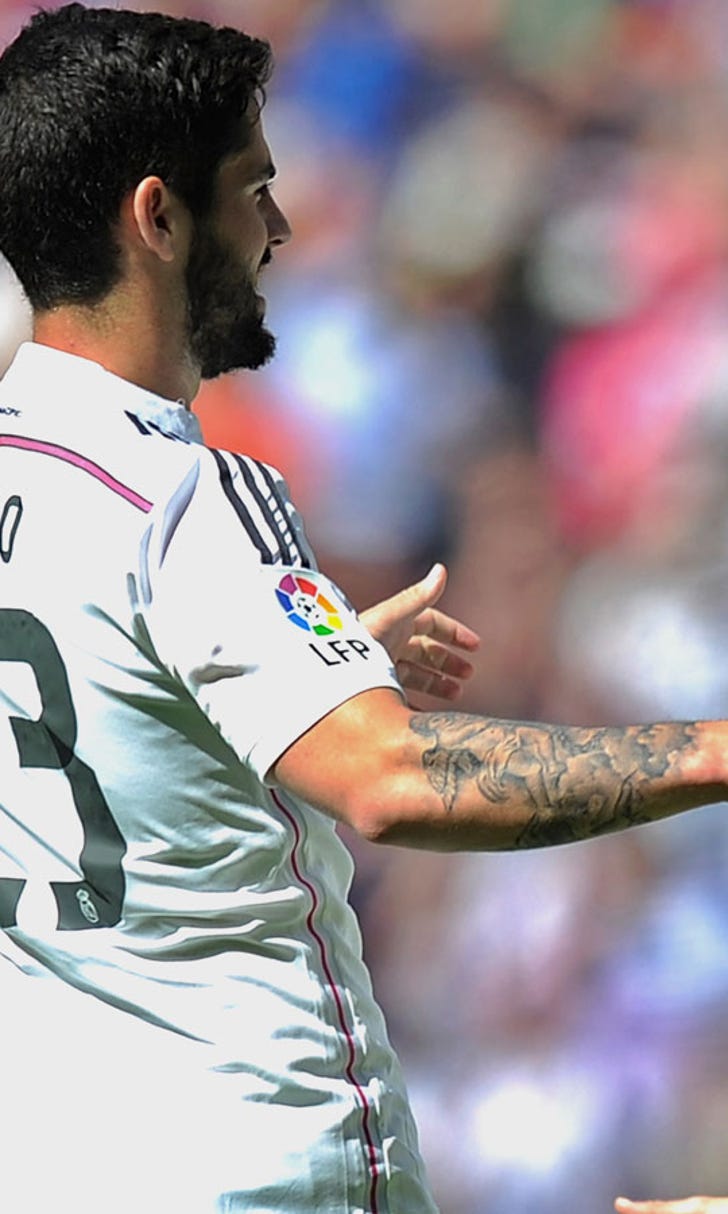 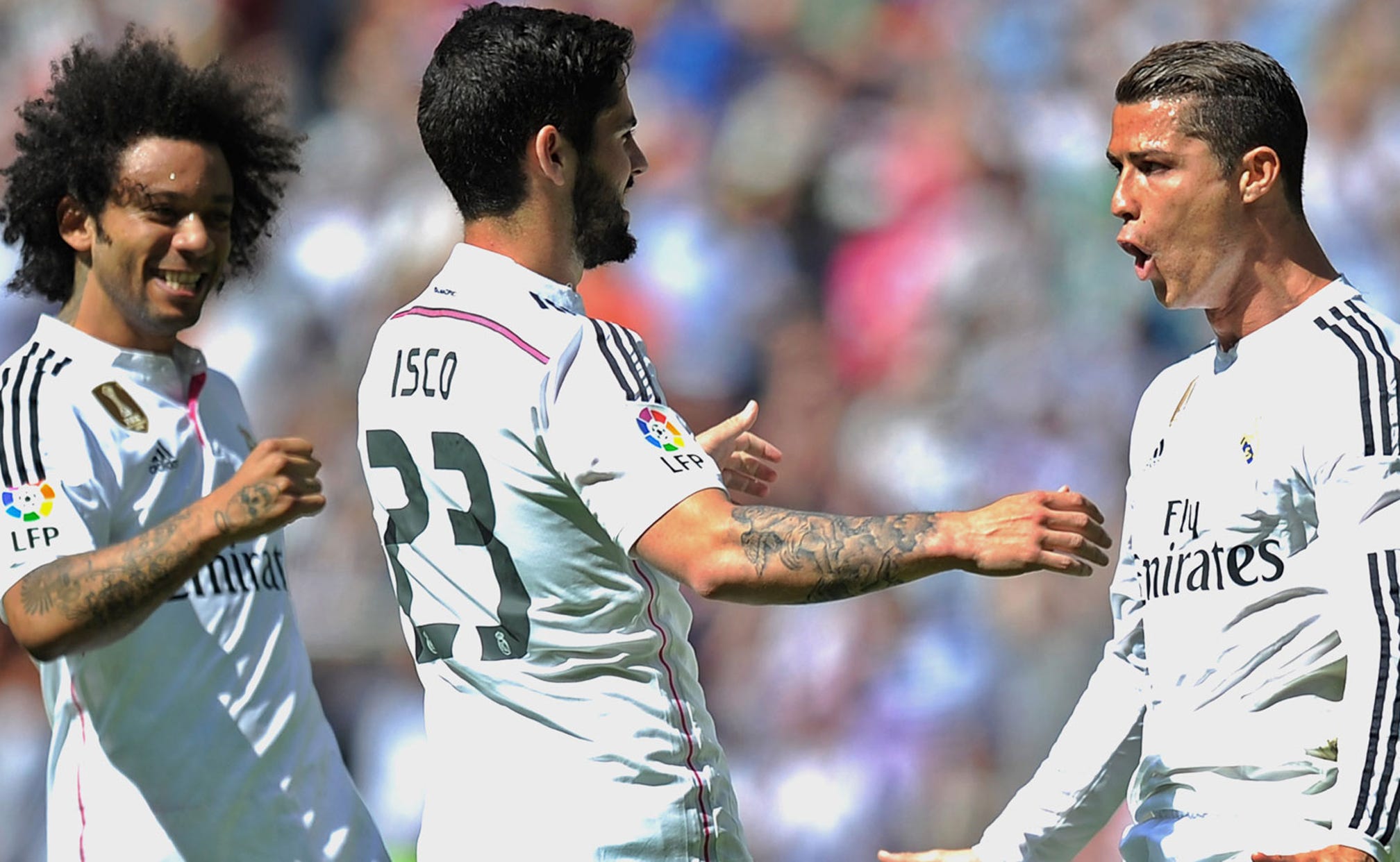 Real Madrid keep pace with Barcelona ahead of derby vs. Atletico 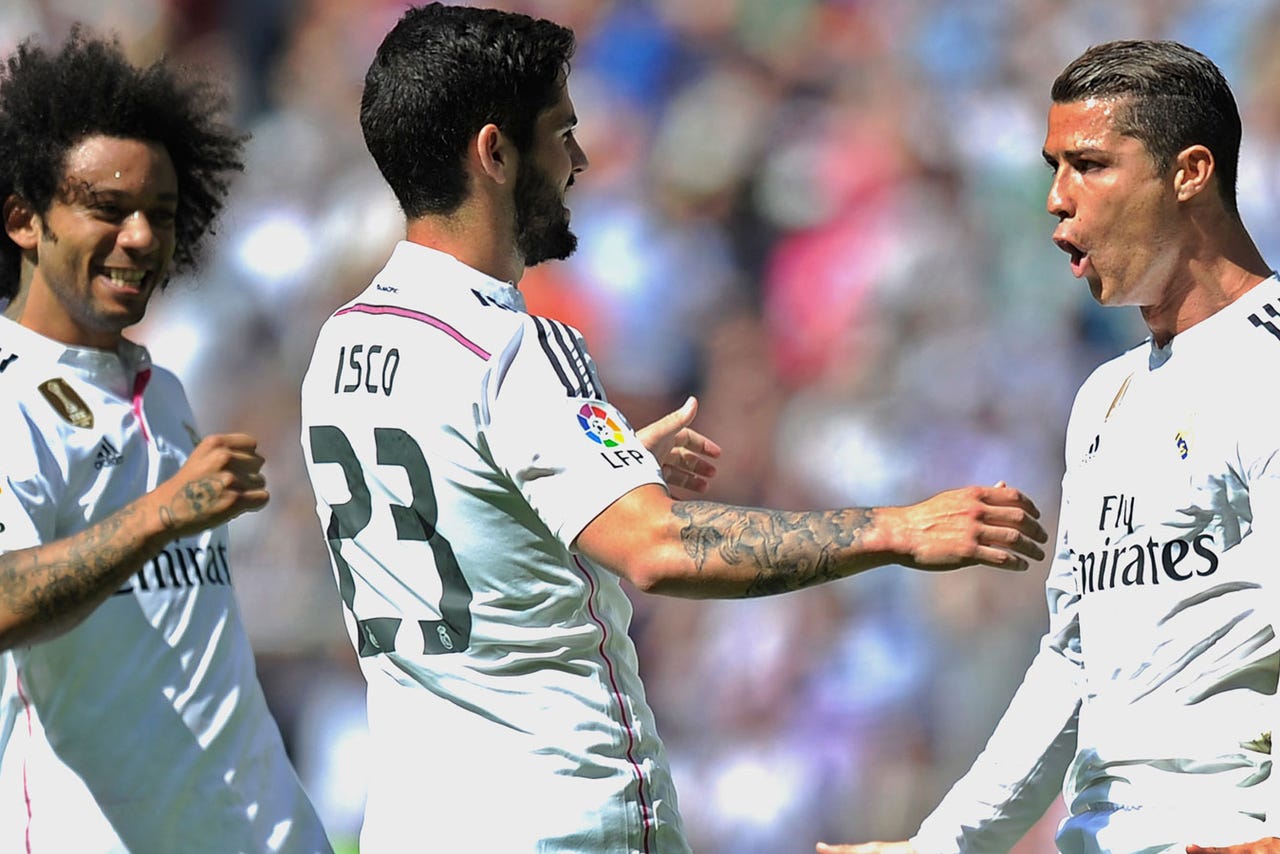 Real Madrid eased to a 3-0 victory at home to Eibar as their makeshift front three of Cristiano Ronaldo, Javier Hernandez and Jese all got on the scoresheet.

Ronaldo scored his first free-kick of the season to put Madrid ahead midway through the first half and two minutes later Hernandez nodded in a second goal to net for the first time in just under six months.

Then Jese scored a fine individual effort late in the second half to round off a win that takes Madrid on to 73 points and keeps the pressure on league leaders and bitter rivals Barcelona.

''It's surprising how eager Ronaldo is to play and score. That's what makes him different from other strikers,'' Madrid coach Carlo Ancelotti told reporters after the match. ''Ronaldo is enjoying the way we play because the team is playing at a fast pace and that gives him more freedom in front of the net.''

Madrid boss Carlo Ancelotti made six changes to the team that won 2-0 at Rayo Vallecano on Wednesday.

Gareth Bale was injured and James Rodriguez and Toni Kroos suspended, and the Italian also opted to rest Iker Casillas, Dani Carvajal and Karim Benzema, with the first leg of their Champions League quarter final tie with neighbors Atletico Madrid looming next Tuesday.

Hernandez made just his second league start for Madrid and thought he had given the hosts the lead on 20 minutes as he tapped in a loose ball after Isco's shot had smacked the post, but the Mexican was correctly ruled offside.

Sergio Ramos had hit the crossbar seconds earlier as Madrid came to life after a slow start, and they took the lead two minutes later with Ronaldo's bouncing free-kick taking Xabi Irureta in the Eibar goal by surprise.

It was the prolific Portuguese's 38th goal of the season and his first from a free-kick in 11 months. Ronaldo could have doubled the lead a moment later as he slid in to meet a cross from Hernandez at the back post but could not find the target.

But Madrid extended their advantage soon enough, with Hernandez glancing Alvaro Arbeloa's cross from the right into the far bottom corner.

With a two-goal advantage at home to a side that had won just once in their last 12 matches, Madrid inevitably took their foot off the pedal in the second half with Ancelotti taking off Ramos, Marcelo and Luka Modric to keep them fresh for the short trip to the Vicente Calderon.

Los Blancos still remained on top, however, and Hernandez was denied a second goal by a goal-line clearance by Txema Anibarro, even though the referee thought Ronaldo had got in the way of the shot instead and gave a goal kick instead of a corner.

But Eibar's resistance could not hold out and with seven minutes remaining Jese fattened the scoreline, powering his way into the area and past Anibarro to arrow the ball into the far bottom corner, giving Madrid fans a reminder of the potential he showed last year before tearing his cruciate ligament.