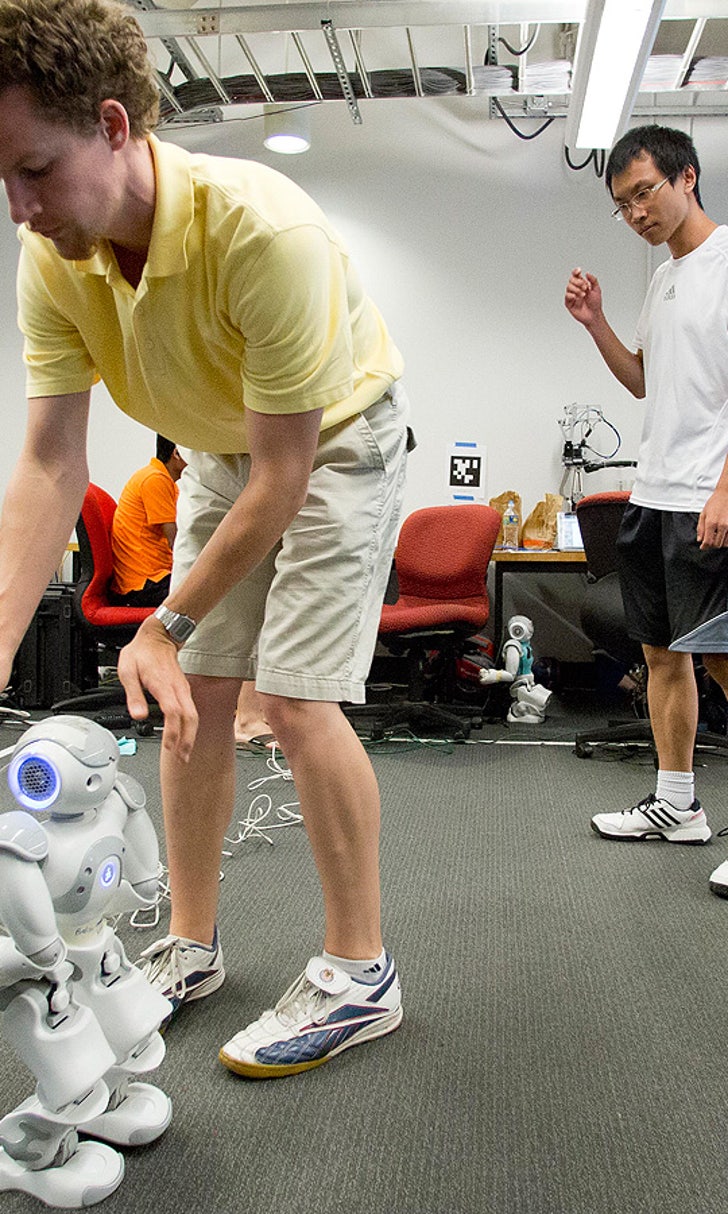 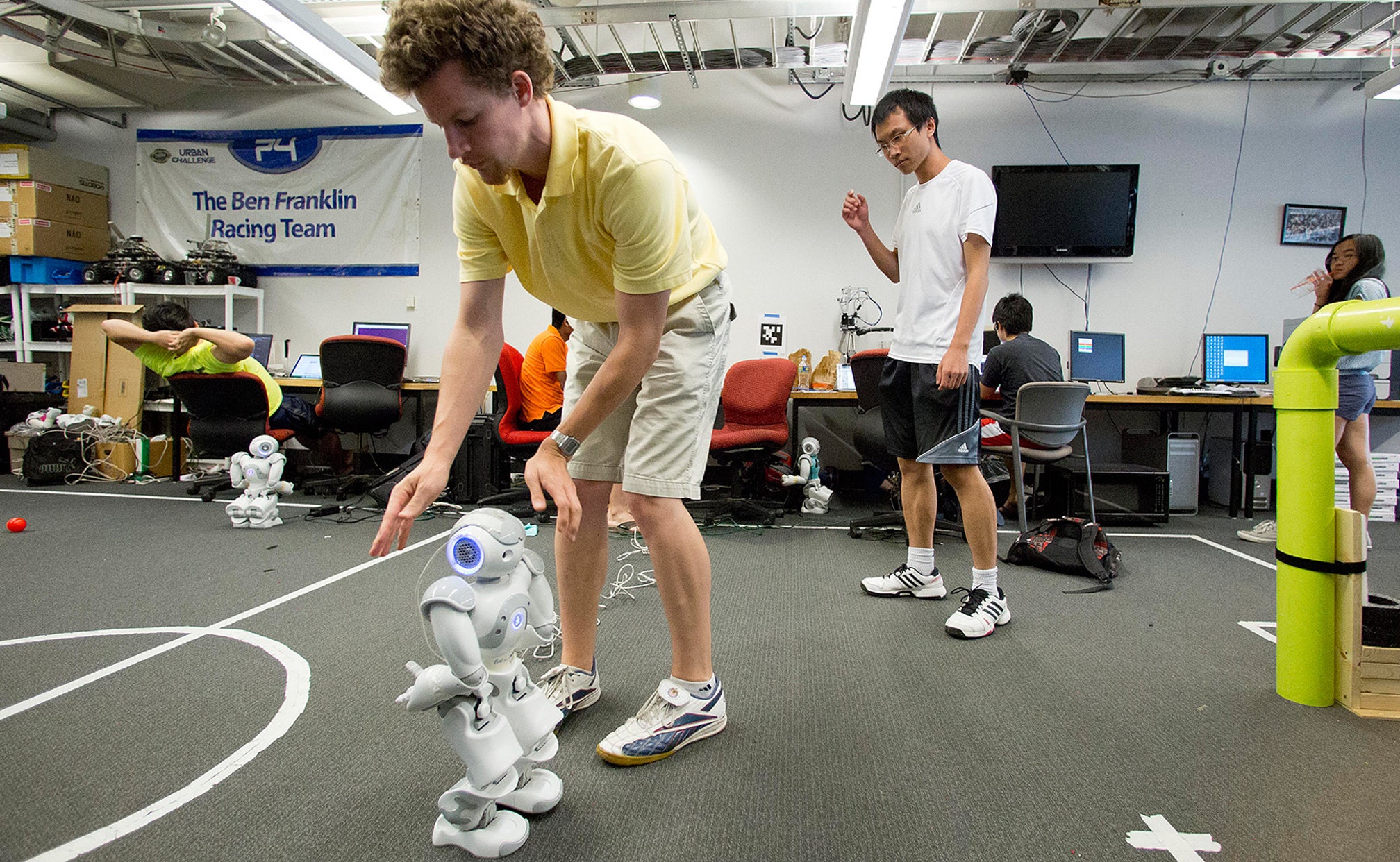 Meet the soccer team geniuses think will beat humans by 2050 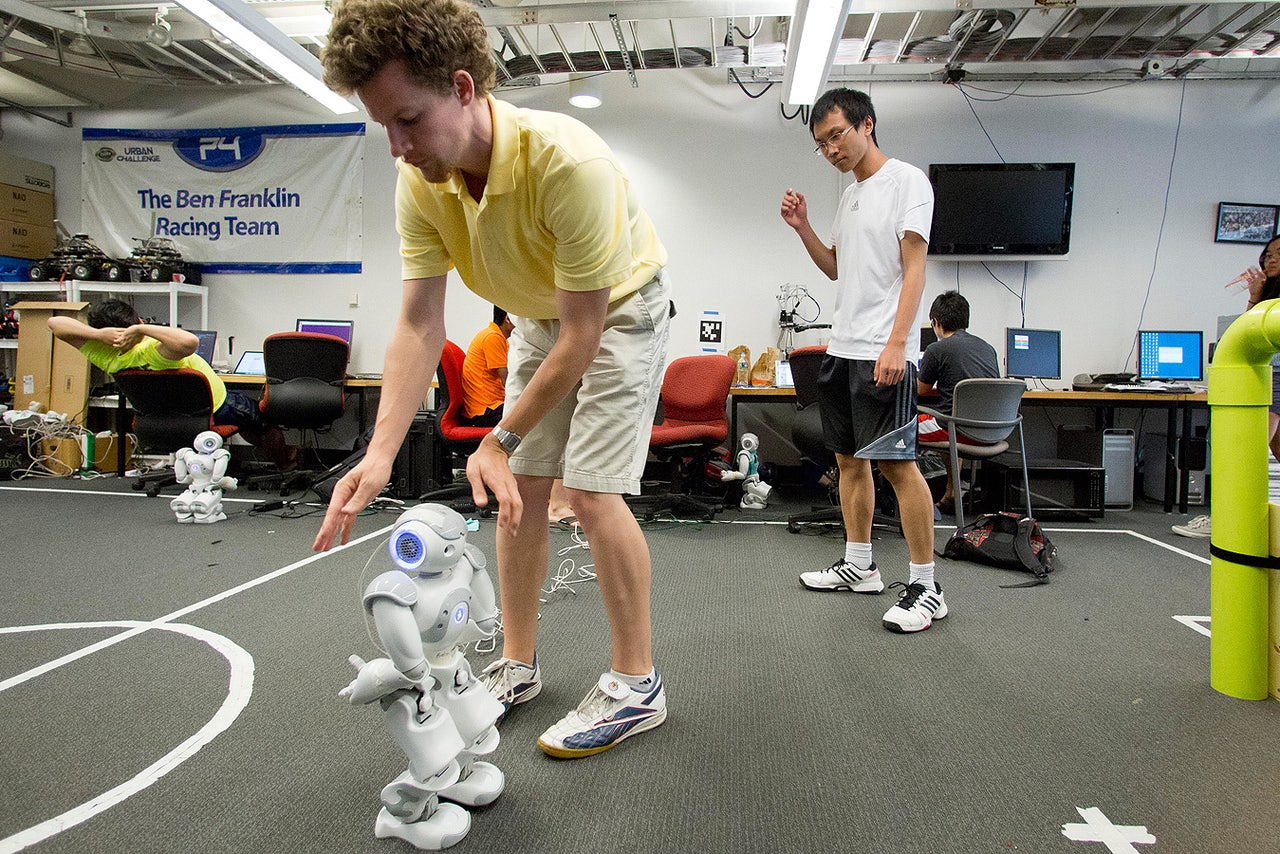 When robots first started playing soccer, it was a challenge for them just to see the ball. And to stay upright.

But the machines participating in this month's international RoboCup tournament are making passes and scoring points. Their ultimate goal? To beat the human World Cup champs within the next 35 years.

"It's hard to predict what will happen in 2050, but we are on the right path," said event co-founder Manuela Veloso, a computer science professor at Carnegie Mellon University in Pittsburgh.

A week after the World Cup title game in Rio de Janeiro, teams from 45 countries will face off at RoboCup about 1,200 miles away in the Brazilian coastal town of Joao Pessoa.

The "players," which range from life-size humanoids to wheeled objects the size of soccer balls, compete in size-based divisions on miniature indoor fields. The tournament runs from July 19-25.

While it's certainly fun to watch, organizers say the annual competition isn't just about creating kicking machines. It's about teaching the fully autonomous robots to make quick, smart decisions while working together in a changing environment.

Those algorithms can translate off the field into technology like self-driving cars or delivery drones, said University of Pennsylvania engineering professor Dan Lee. RoboCup includes separate contests for service robots and search-and-rescue droids.

Lee, who directs Penn's robotics lab in Philadelphia, has been the head "coach" of the school's RoboCup soccer teams since 2002. Back then, the games resembled those played by 5-year-old children, Lee said.

"They would all cluster together," he said of the robots. "Whoever got the ball would have a hard time figuring out which way to kick the ball."

Now, it's like watching 10-year-olds execute basic athletic skills and strategies, Lee said. The battery-powered creatures play much shorter matches — about 20 minutes, compared with 90 minutes in the World Cup — but generally follow the same rules. Humans referee the games, entering their calls into a computer that communicates with the robots.

Penn, which has won the past three years in the kid-size humanoid league, is one of about eight U.S. universities traveling to Brazil. Students are bringing a 5-foot-tall metal humanoid named THOR (Tactical Hazardous Operations Robot) to play in the adult-size division, as well as a squad of smaller plastic white robots known as Naos — an off-the-shelf model that looks like a cross between a "Star Wars" Stormtrooper and the Stay Puft marshmallow man from "Ghostbusters."

Just like humans, the robots have to "practice" as students monitor (but do not control) their actions in the lab. And, just like humans, robots can get injured: THOR needed hip "surgery" last month to replace a blown motor.

When RoboCup first began in 1997, Veloso said, most robotics research focused on the abilities of single machines, such as NASA's Sojourner rover on Mars. RoboCup seeks to emphasize machine collaboration, she said.

The team from George Mason University in Virginia wants to teach its players to work together in real time — a crucial skill for using droids to respond to disasters or emergencies. Students plan to train their 18-inch-tall humanoids through field demonstrations immediately before each game.

"You want to be able to bring something to the table that nobody's come up with yet," Langstaff said.

And there's always something new to learn. Robot types and technologies are evolving as fast as smartphones, RoboCup co-chairman Alexandre da Silva Simoes said in an email. Organizers make the game tougher each year by changing parameters like field size or number of players.

Next year, Veloso said, the robots might play outside.