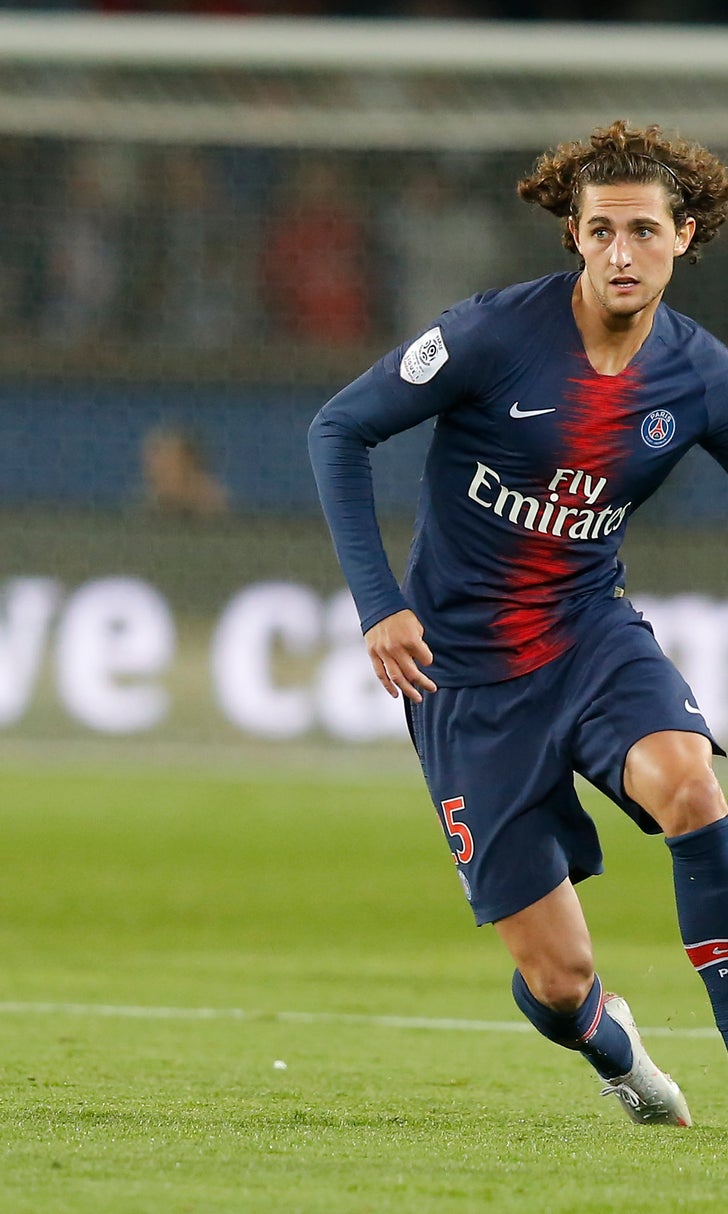 From fan favorite to unwanted: Is Rabiot's PSG career over?

PARIS (AP) — Adrien Rabiot was once one of Paris Saint-Germain's most promising players: a talented local lad who rose through the ranks to become a huge fan favorite.

Now the relationship between PSG, Rabiot and the fans is so toxic it's beyond repair.

"Because the situation has completely deteriorated, there is no way back," his mother and agent Veronique Rabiot told RTL radio on Wednesday.

PSG fans jeered Rabiot when he came on in a Champions League game against Liverpool last month. Like the club, they have grown weary of endless contract talks.

PSG's patience snapped this week and it looks like Rabiot is certain to be sold in January — providing a sad end to what should have been a PSG fairytale.

Born in the Val-de-Marne region of Paris, the 23-year-old Rabiot joined PSG aged 15. A lanky attacking midfielder with great physique, silky touch and an excellent passing range, he has played 226 games and won multiple domestic titles with PSG.

A sure sign Rabiot's time is up came on Tuesday when, a day after being criticized by the club's sporting director Antero Henrique, he was left out for a League Cup game against second division Orleans.

That decision was made despite PSG needing to rotate players to prevent fatigue later on, notably in the Champions League. When perhaps he should have been rested, Angel Di Maria played in a physical contest against weaker opposition and picked up an ankle injury.

Speaking about Rabiot's predicament, PSG coach Thomas Tuchel said: "I love the player. But the situation has lasted a long time."

Rabiot's current contract expires next June, after which he will cost nothing — an unwanted situation considering PSG needs to raise cash in light of Financial Fair Play concerns. Spanish champion Barcelona is reportedly preparing a January bid, and Rabiot's ability to play long or short passes quickly seems suited to Barca's fluid style.

Selling Rabiot would also give Tuchel much-needed money to buy a specialist holding midfielder to protect the defense. This is not Rabiot's best role and, unfairly, he has too often been asked to compensate by playing as a defensive midfielder. Although this has held back his development as an attacking midfielder, Rabiot has not helped his cause by too often complaining about it. Also, if so unhappy, he might already have left PSG rather than continuing contract talks for so long.

But Veronique Rabiot said PSG turned down an offer from Barcelona this summer. Henrique replied by saying Barca's offer for Rabiot — made on Aug. 29 and just before the close of the summer transfer window — was so low it was considered "ridiculous."

Whoever is proved right in the end, Rabiot has long been an enigma and never quite reached the heights predicted for him.

When in charge of PSG from 2013-16, Laurent Blanc nurtured Rabiot's undoubted talent. But recently, Blanc delivered a crushing verdict on his attitude.

"When you are so far ahead, don't ruin it with decisions or attitudes that are completely off kilter," Blanc said. "He shouldn't get his back up."

"He has an enormous amount of potential but unfortunately not everything's straightforward with him," Blanc told France Football magazine. "He hasn't had the career path he should have."

Rabiot has fallen foul of both club and country.

When France coach Didier Deschamps left him out of his 23-man World Cup squad, Rabiot responded angrily by refusing to be among the reserves in case of injury. It was a startling attitude for someone with only six international caps.

But Rabiot has never been shy to back himself.

Previously, he startled PSG with a non-sanctioned television interview brazenly evoking the possibility of leaving because he wasn't getting enough games. Rabiot was criticized by media and mocked on social networks for the fact his mother represents him in negotiations.

Given the fallout from Rabiot's World Cup standby refusal, it was perhaps surprising PSG made him captain for some pre-season games over the summer. If intended as a show of faith to get him to sign a new deal, it simply didn't work.

But PSG's loss could be Barca's gain, for the Catalan giant could land a highly talented player for even less than they bid last summer.

In the end, Rabiot could be the winner.