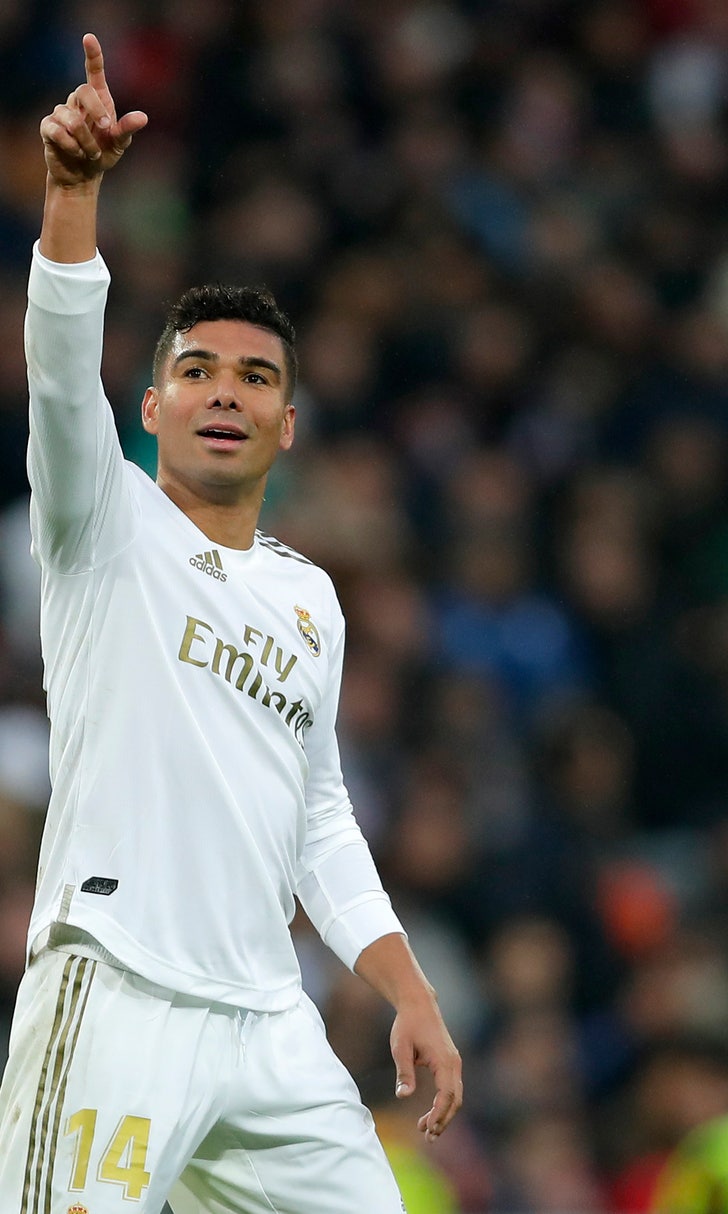 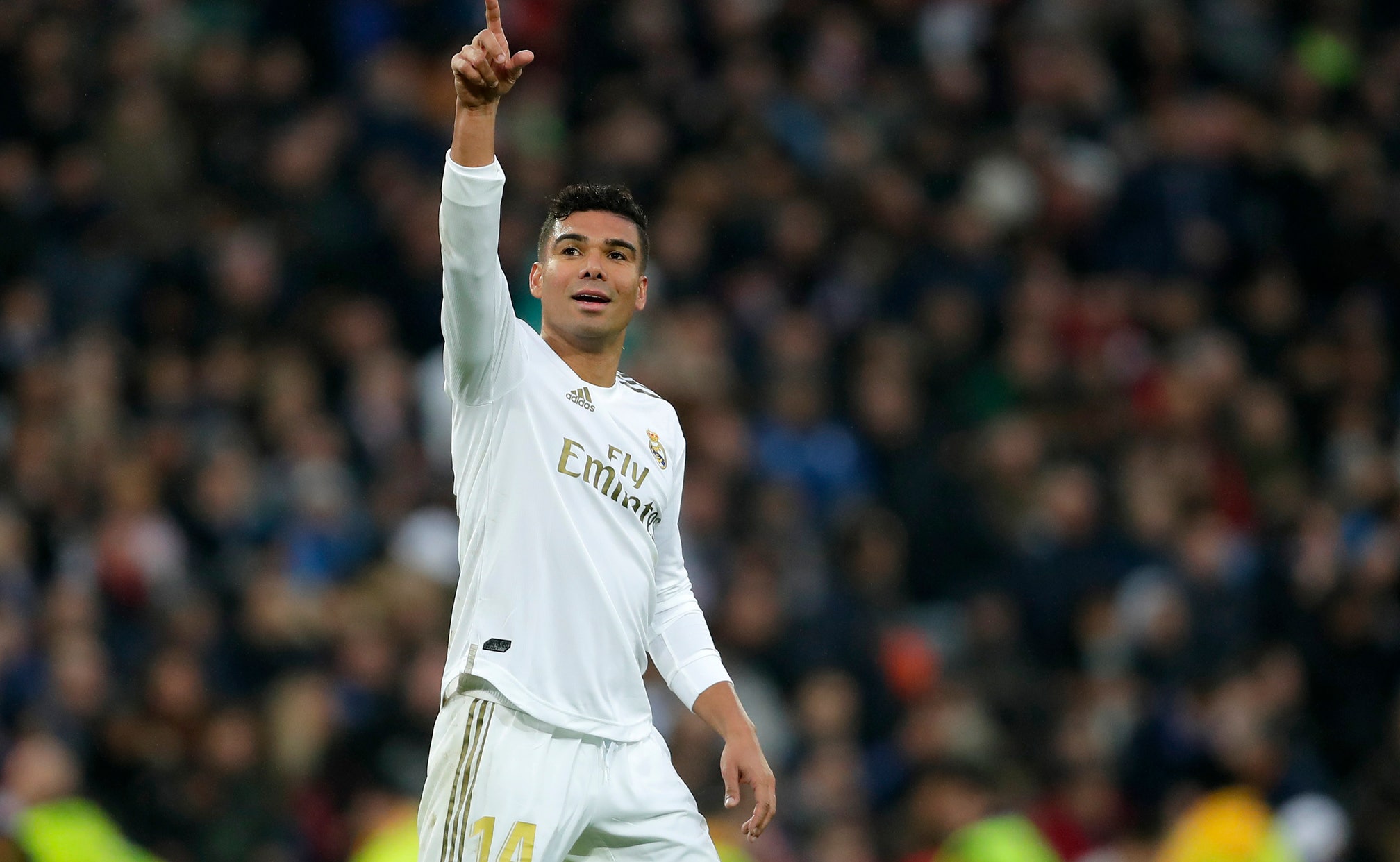 BARCELONA, Spain (AP) — Defensive specialist Casemiro scored his first brace for Real Madrid to ensure a 2-1 home win over Sevilla in the Spanish league on Saturday.

Casemiro broke the deadlock for Madrid in the 57th minute when the Brazil midfielder was set up by Luka Jovic.

Sevilla striker Luuk de Jong, who had a goal ruled out by a video review in the first half, leveled in the 64th before Casemiro headed the hosts back in front five minutes later.

“(I’m pleased) not only for the goals but also for the hard work of all the team against a great rival,” Casemiro said. “It was a typical Madrid-Sevilla (game). These three points are important.”

The victory lifted Madrid into the lead and three points ahead of second-place Barcelona before the defending champions host Granada on Sunday. Barcelona holds the tiebreaker with Madrid on goal difference.

Atlético Madrid fell further behind in third place after losing 2-0 at Eibar. Diego Simeone’s side trails Madrid by eight points just past the season’s midway point.

It was the first game back at the Santiago Bernabeu for Sevilla coach Julen Lopetegui, who was fired as Madrid’s manager last season after just 14 matches. Lopetegui has impressed this season with Sevilla, which has the best away record in the competition. Sevilla is in fourth place.

Sevilla’s players greeted Madrid with an honor guard before kickoff for its victory at the Spanish Super Cup, played last week in Saudi Arabia.

Madrid manager Zinedine Zidane left Karim Benzema on his bench until the final half-hour after the striker's left leg injury had kept him out of the Spanish Super Cup. Jovic started in Benzema’s place and was not a significant presence until he set up Casemiro’s opener.

Sevilla outplayed Madrid in the first half and thought it had gone ahead in the 30th when De Jong headed in a corner kick. But the referee reversed his initial decision to allow the goal after consulting a video review, when he spotted a foul by Nemanja Gudelj who appeared to intentionally block Madrid’s Éder Militão to leave De Jong free.

“What we saw was a great goal, the fruit of our work all this week, that was waived off. And I can’t understand it,” Lopetegui complained after the game.

Madrid enjoyed the second half against Sevilla thanks to Casemiro’s incursions in attack.

Casemiro showed an exquisitely fine touch - for a midfielder known for his tackling skills and ability to contain opposition attacks - when he scooped the ball over goalkeeper Tomas Vaclik from a tight angle. Jovic had set him up with a superb pass with the back of his heel to finally find a way through Sevilla’s defense.

De Jong hit right back with a well-placed strike into the corner of the net.

Casemiro headed in his second goal from a cross by Lucas Vázquez after he found a hole between Sevilla’s two center backs in one of the visitors’ few defensive lapses. It was his first double since becoming an important player for Madrid in 2015.

“In attack (Casemiro) can appear in scoring positions from time to time,” Zidane said. “The second goal surprised me more. Any of our players can make the difference in attack. Today it was Case’s turn and I am happy for him.”

Substitute striker Youssef En-Nesyri, who debuted for Sevilla following his transfer from Leganés, squandered a chance to score late after he recovered possession from Vázquez and fired wide.

Madrid defender Sergio Ramos was unavailable due to a leg injury that he is expected to recover from soon. Madrid was also without suspended midfielder Federico Valverde and Gareth Bale, who was left off the squad after missing the Spanish Super Cup due to illness. Sevilla was without suspended forward Lucas Ocampos.

Eibar outhustled Atlético under steady rain in northern Spain, hemming the visitors in their area early on and going in front from a set piece.

Estebán Burgos scored what proved to be the winner in the 10th when he was unmarked to tap in a corner kick headed on by Sergi Enrich to the far post.

Atlético’s late push was ended by Edu Expósito’s long strike in the 90th, ending a run of three consecutive wins in the league for the visitors.

Alavés forward Aleix Vidal scored in the second half to secure a 1-0 win at Levante.

The former Barcelona player was set up by Lucas Pérez on the break in the 64th, giving the small Basque Country side its first win in six rounds.