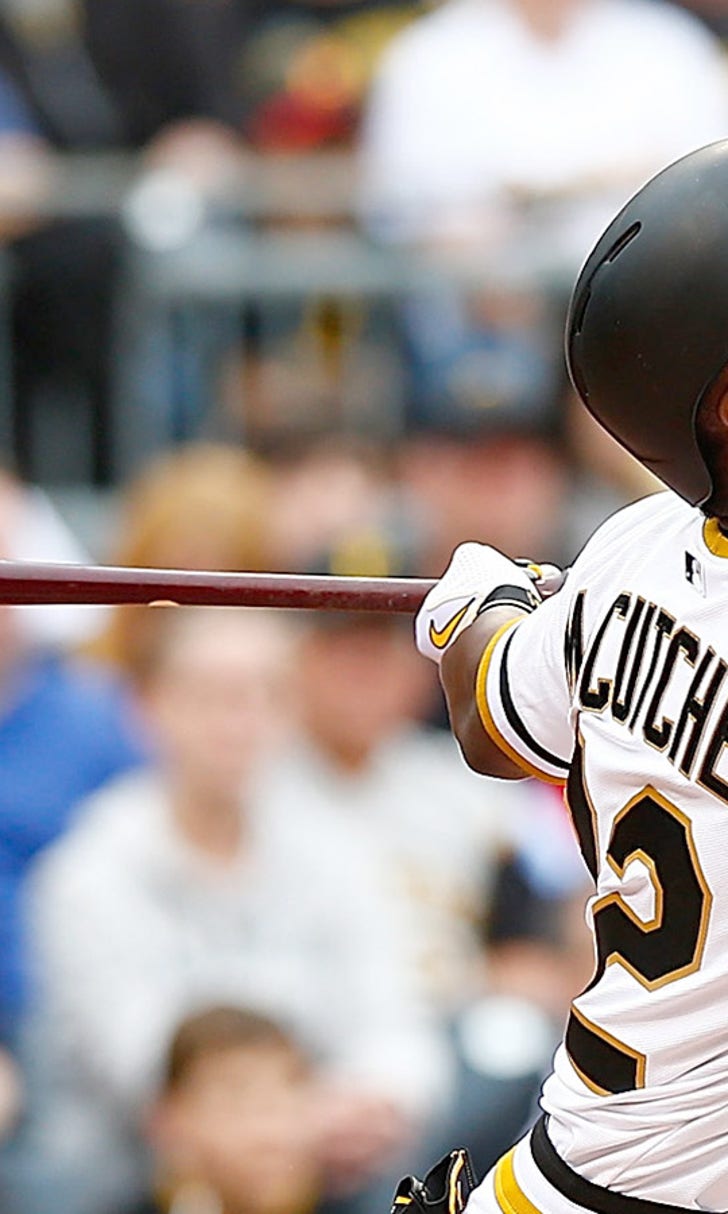 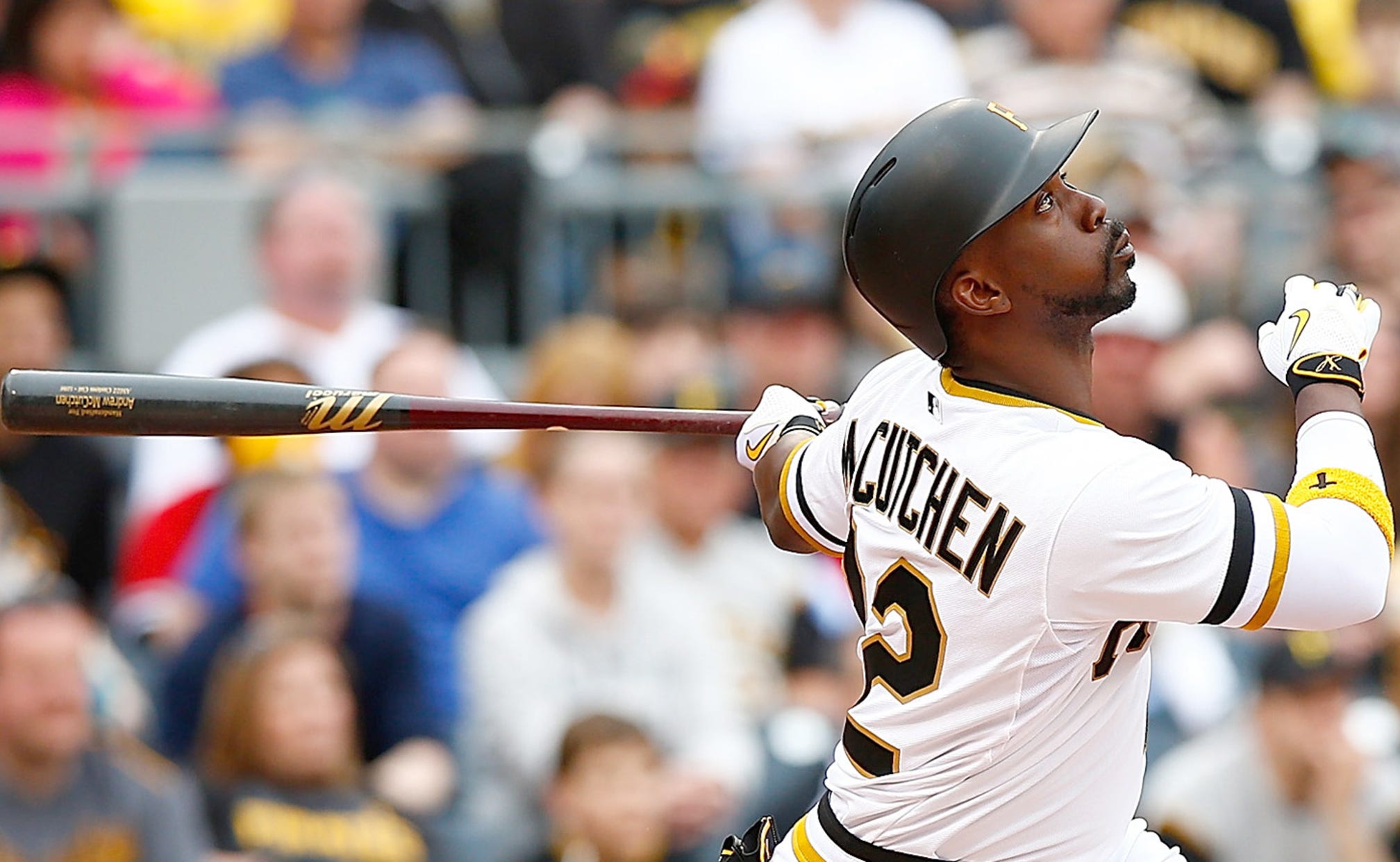 The Matter With Andrew McCutchen

Andrew McCutchen has been bad. I think I'm allowed to say that. Used to be, it was just a bad start. It's still a bad start, but we're a week into May, so that "just" is disappearing by the second. Attention to this thing is warranted.

Now, at any given time, lots of baseball players are in the midst of being bad. What's weird about McCutchen being bad, in particular, is that he's usually not. He goes beyond just being an All-Star; he's one of the five best players in the game today. The spotlight shines a little brighter, and so when things are going awry, people notice.

How much do I need to go over, here? I know McCutchen's numbers are bad. You know McCutchen's numbers are bad. I don't need to review a ton of information proving as much. Here, let's just look at one graph. As I write this, McCutchen has played 26 games in 2015. Below, his whole career, in rolling 26-game stretches of OPS. Pretty simple measure of hot streaks and cold spells: 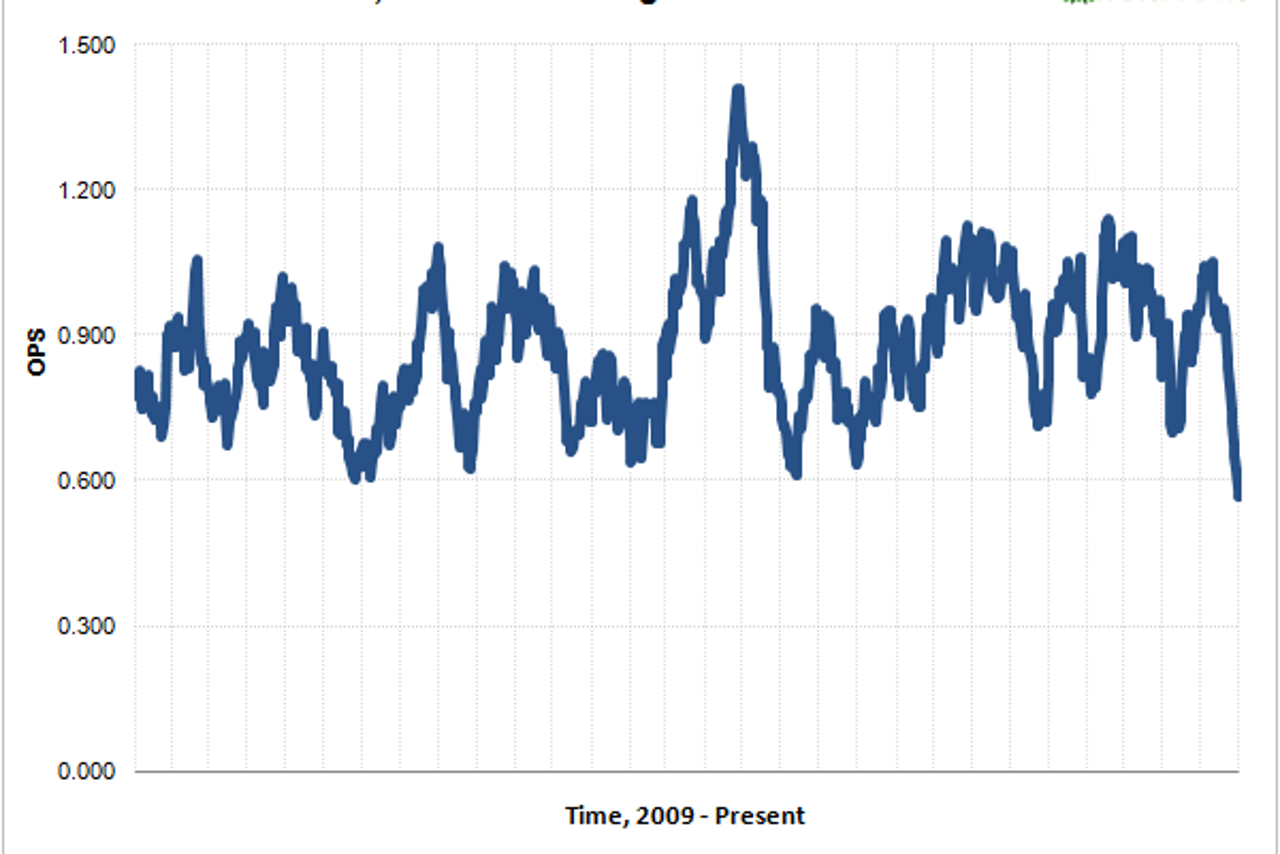 Two things to take from that. One, McCutchen has had bad 26-game stretches before. They've just been tucked into the middle of seasons, rather than being right at the start, all conspicuous-like. Two, McCutchen has been quite bad this season. As far as the graph above is concerned, McCutchen has achieved a career minimum. It's not proof that something's wrong, but it's enough to make you wonder.

OK. Next, let's look at some simple spray charts. This also won't identify a problem, but it will show something that's missing. First, McCutchen's balls in play, from 2012-2014: 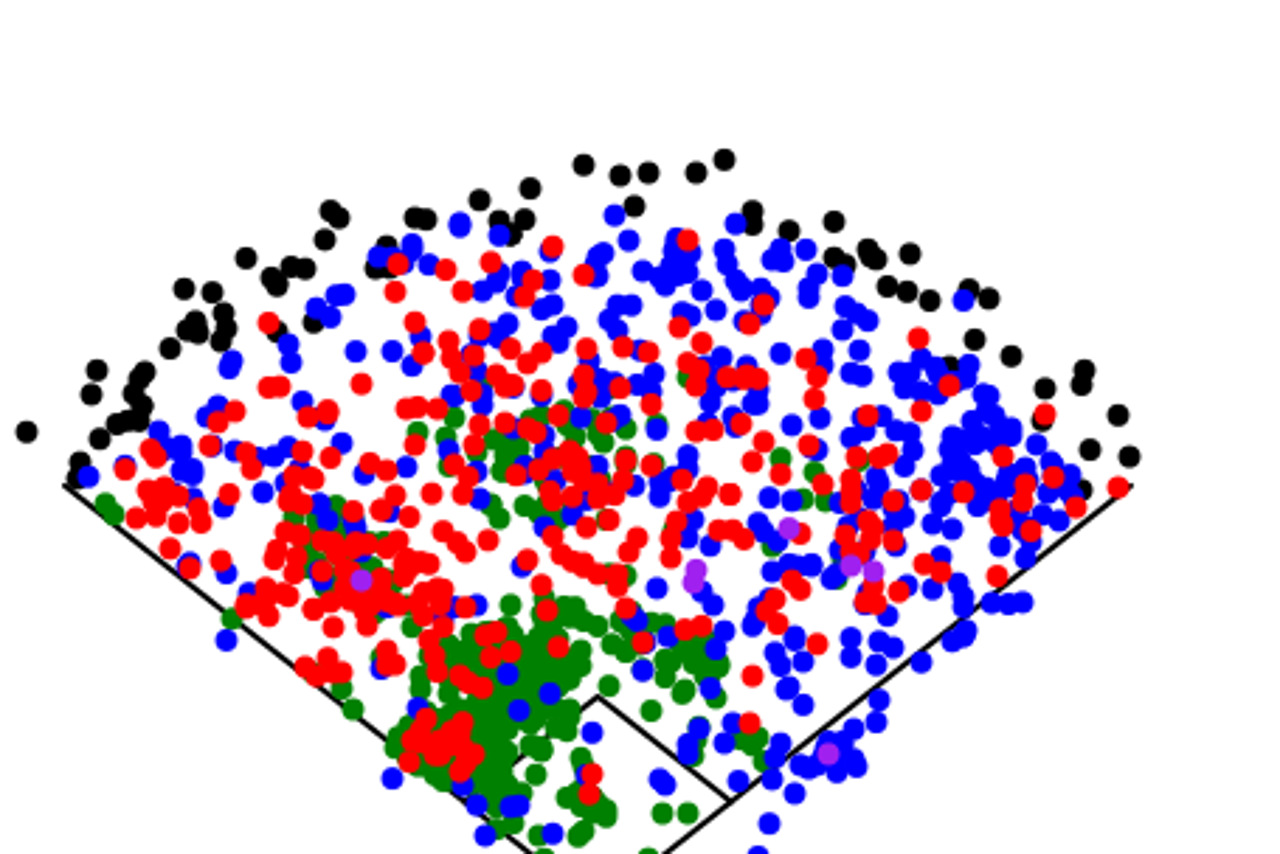 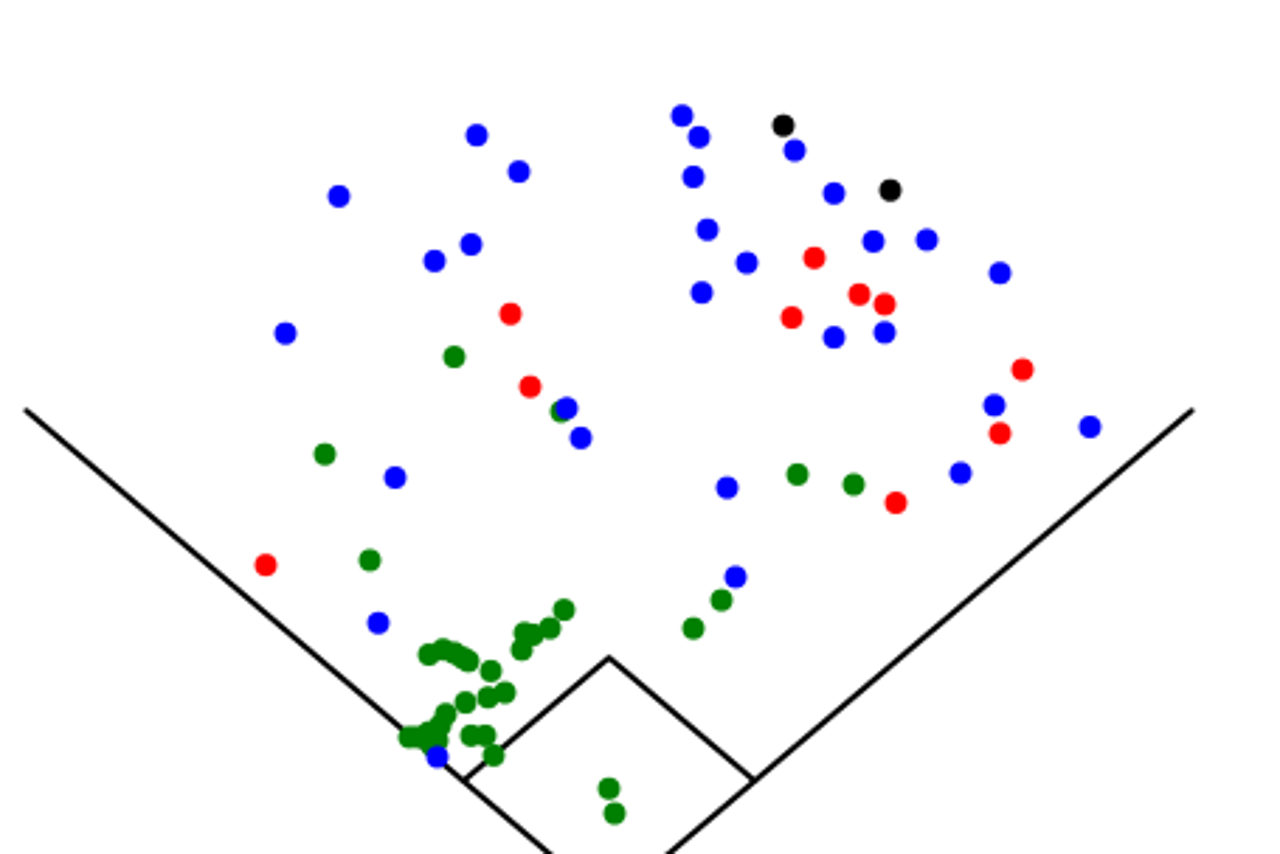 You see what isn't there? The pull power is missing. Basically nothing hit with authority to left field. There is a lonely line drive, but it's desperate for company. McCutchen has long been an all-fields hitter, so there's nothing weird about him going up the middle or the other way, but the fact that he isn't turning on anything is strange.

What's the problem? You can't just say "no pull power." You can't say "not hitting the ball hard enough." I mean, yeah, those are problems, but those are symptoms of an underlying disease. The problem has to do with McCutchen's swing. That's the part that isn't functioning like normal.

And this is where there's no choice but to talk about McCutchen's left knee. McCutchen missed time in spring training with knee inflammation. At least a little bit of discomfort has persisted, and while McCutchen refuses to take time off, you can tell from the fact he's attempted just two stolen bases that he's seemingly not 100 percent. Based on prior rates, we would've expected four or five steal attempts by now. That, again, isn't conclusive, but it's possible to go deeper.

McCutchen, for his part, denies that his knee is the reason behind his problems. His manager apparently agrees with him, and McCutchen thinks it's something mechanical. Scouts aren't so sure, but it can be both an injury and something mechanical, since an injury would have mechanical effects. It seems like we're looking at one of two things. McCutchen, perhaps, feels discomfort when he swings, because of an injury. Or McCutchen's mechanics have just become off, maybe from previously trying to compensate for an injury. Could be McCutchen physically feels fine enough, and it's just a matter of rewriting muscle memory.

But the swing is just not what it has been. Regardless of cause, McCutchen's swing is missing something. Let's watch a few .gifs of McCutchen hitting baseballs hard. A swing from 2014:

I want you to keep your eye on McCutchen's back foot. It's going to serve as our indicator. Here, you see McCutchen's foot lift off the ground, and drive forward. Then it comes back down with some force. What it's indicating is strong weight transfer to the front leg, basically maximized at contact. As McCutchen hits the ball, his back foot isn't even touching anything.

So much is similar. It's still Andrew McCutchen. But, eye on the back foot. It doesn't leave the ground. It doesn't shift forward. It's active, but it's more restrained, suggesting less-efficient weight transfer. McCutchen doesn't have everything on his front leg at contact. It's his front leg that's had the uncomfortable knee.

The foot doesn't drive forward. It basically stays where it is, in the back of the box. McCutchen still managed to pull a sharp groundball, but he wasn't getting as much strength from his lower body as he has in the past. I don't think McCutchen's swing right now is all arms, but it's definitely less legs, and legs are critical to power. It's easy enough to connect the dots.

So Andrew McCutchen has had a sore left knee. Coincidentally or not, his swing is putting less stress on his left leg. That's the kind of thing that seems protective. Now, you can't completely dismiss McCutchen's words. He doesn't think this is about his knee, and he's typically a pretty honest player. But he's also a proud player. Could be, he's swinging through discomfort. Could also be, he was swinging through discomfort earlier on, and now there's less discomfort, but he's dealing with an altered swing that he needs to get back on track. For the Pirates' sake, the latter would be preferable. If it's the former, it's hard to imagine McCutchen getting better and healthier if he keeps taking the field.

This is the year we're getting some StatCast data. It's incomplete, but very exciting. There are 172 hitters for whom we have information for at least 40 balls hit into play. McCutchen ranks tied for 103rd in average batted-ball velocity. He's tied with teammate Gregory Polanco, and just a hair above Alexei Ramirez. At the upper end, McCutchen has topped out with one ball hit 105 miles per hour. More than 200 players have at least two such batted balls. According to the ESPN Home Run Tracker, last year McCutchen hit 12 home runs at least 105 miles per hour, and most balls hit that hard stay somewhere in play. I wouldn't say the data's nightmarish. It's just underwhelming, for an MVP.

The matter with Andrew McCutchen is his swing. Maybe he's still in pain, and maybe he's not still in enough pain for it to matter. But regardless, he has a swing that's seemingly compensating for an uncomfortable left leg. And that's not the swing of a successful Andrew McCutchen.