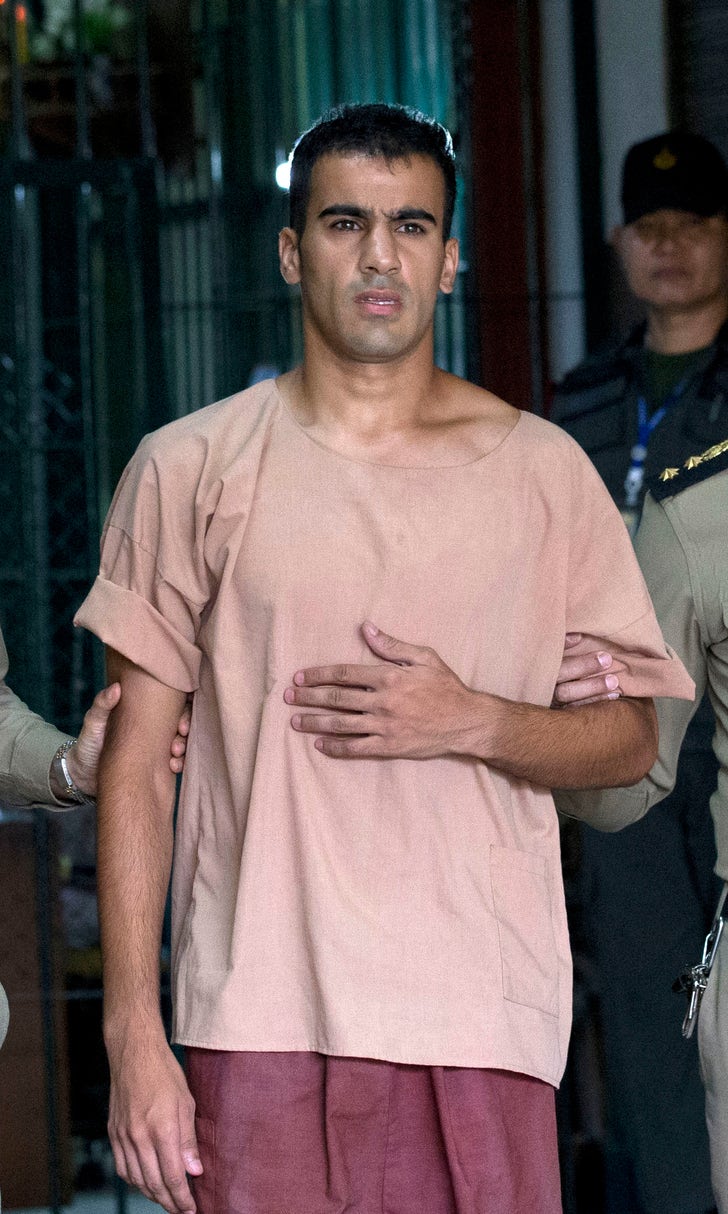 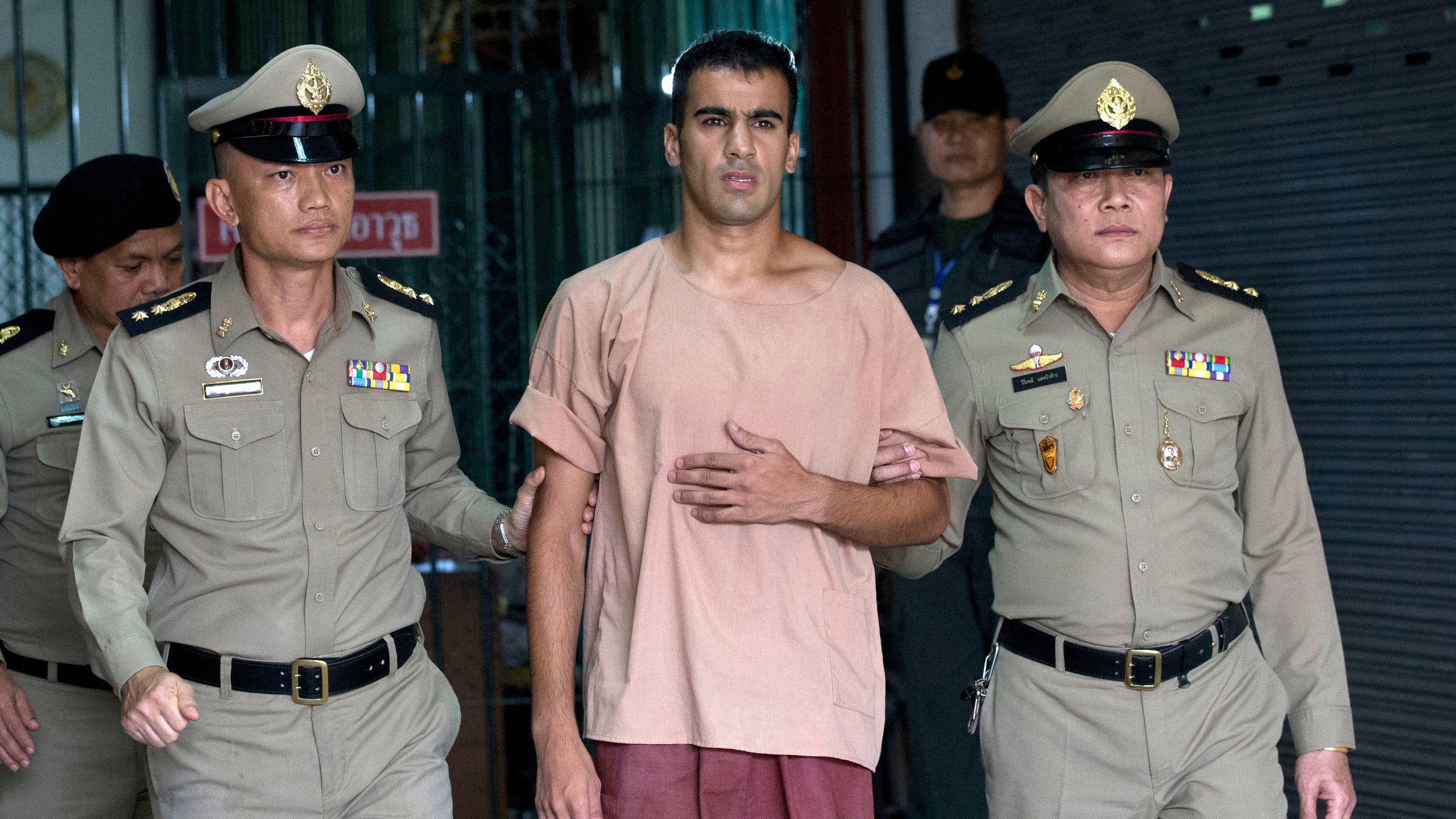 BANGKOK (AP) — Thailand's government insisted Wednesday it cannot free a detained soccer player who has refugee status in Australia until hearings on Bahrain's request for his extradition are completed.

Thailand has come under great pressure from Australia's government, sporting bodies and human rights groups to send Hakeem al-Araibi back to Australia. He was arrested last year at a Bangkok airport when he arrived on a honeymoon trip with his wife.

Al-Araibi, a former player on Bahrain's national team, says he fled Bahrain due to political repression and that he fears torture if he returns. Bahrain wants him back to serve a 10-year prison sentence he received in absentia in 2014 for alleged involvement in the arson of a police station, a charge he denies.

He contends he was blindfolded and had his legs beaten while he was held in Bahrain previously and believes he was targeted for arrest because of his Shiite faith and because his brother was politically active in Bahrain. Bahrain has a Shiite majority but is ruled by a Sunni monarchy.

Thai authorities said at a news conference Wednesday that after detaining the 25-year-old al-Araibi on his November arrival in Bangkok, they received a direct request from Bahrain for his extradition, compelling them carry out court hearings.

"From this point on, the case has entered into the Thai judiciary system," said Trumph Jalichandra, deputy spokesman for the attorney general's office. "The government's position is that it will not interfere. It will take some time before the court makes its decision. We don't know what that decision will be. Please don't make an assumption that the court will rule one way or the other. We have to wait and see."

Al-Araibi will stay in custody until a court begins hearings on April 22 on his extradition case. He informed the court on Monday that he declined to be voluntarily extradited.

The Australian government has urged Thailand to exercise its legal discretion to free al-Araibi.

Thailand's Foreign Ministry said in a statement late Tuesday that al-Araibi was detained on arrival because Australian authorities had forwarded them an Interpol Red Notice that Bahrain was seeking his arrest. Australian police acknowledge doing so, but there have been questions raised about why the Red Notice appeared to have been issued just before al-Araibi departed on his trip, and whether Bahraini authorities had been tipped off about his travel plans.

The Foreign Ministry statement appeared to be a defensive response to the almost daily public appeals Thailand has been receiving asking for al-Araibi's release.

"Thailand had previously not been aware of Mr. Hakeem's case and does not have any prejudice against him. Indeed, we would not have become involved in the issue had we not received the Red Notice alert from the Australian Interpol and the subsequent formal request by Bahrain for his arrest and extradition," it said.

Laying out the main argument at Wednesday's news conference, it said that "Thailand does not gain anything from holding Mr. Hakeem in custody. But as a sovereign country that has legal obligations and commitments to the international community, Thailand finds itself in the middle of a case involving two countries competing for Mr. Hakeem's custody."

The statement suggested that Australia and Bahrain talk with each other to work out a mutually acceptable agreement on al-Araibi's fate, rather than have a Thai court decide it.

"Thailand hopes that Australia and Bahrain will have the goodwill to earnestly work together towards finding a win-win solution to this issue," it said. "In that way, we believe that those following this case in Thailand and around the world will praise both Australia and Bahrain for their efforts."

In the latest action in support of al-Araibi, Australian soccer authorities canceled a game in Thailand to protest his continued detention.

Football Federation Australia announced Wednesday it had scrapped the game against China, a scheduled warmup ahead of next month's qualifiers for the Asian under-23 championships.

Former Australia national team captain Craig Foster and the Australian and international players' unions have been leading a campaign for the release al-Araibi, who plays for a semi-professional club in Australia.

"Australia's national teams are united in their support for Hakeem al-Araibi and we call on the community to continue to campaign for his release," Australia coach Graham Arnold said.

Australian Prime Minister Scott Morrison has in recent weeks has spoken out strongly on behalf of al-Araibi's freedom.

"I've written two letters now to the Thai prime minister and our consular officials and others have been using every opportunity they have to press the case to bring Hakeem home," he said at a Wednesday news conference in Melbourne.

"We've also been pressing that case with the governor of Bahrain as well. And I'd simply say this, it is within the executive authority of the Thai government to actually enable him under their law to be returned to Australia. I have pointed this out in the engagements I've had with the Thai prime minister."

Thai officials have indicated that there could be action taken by the executive branch of government, but only after the extradition case has gone through the courts.