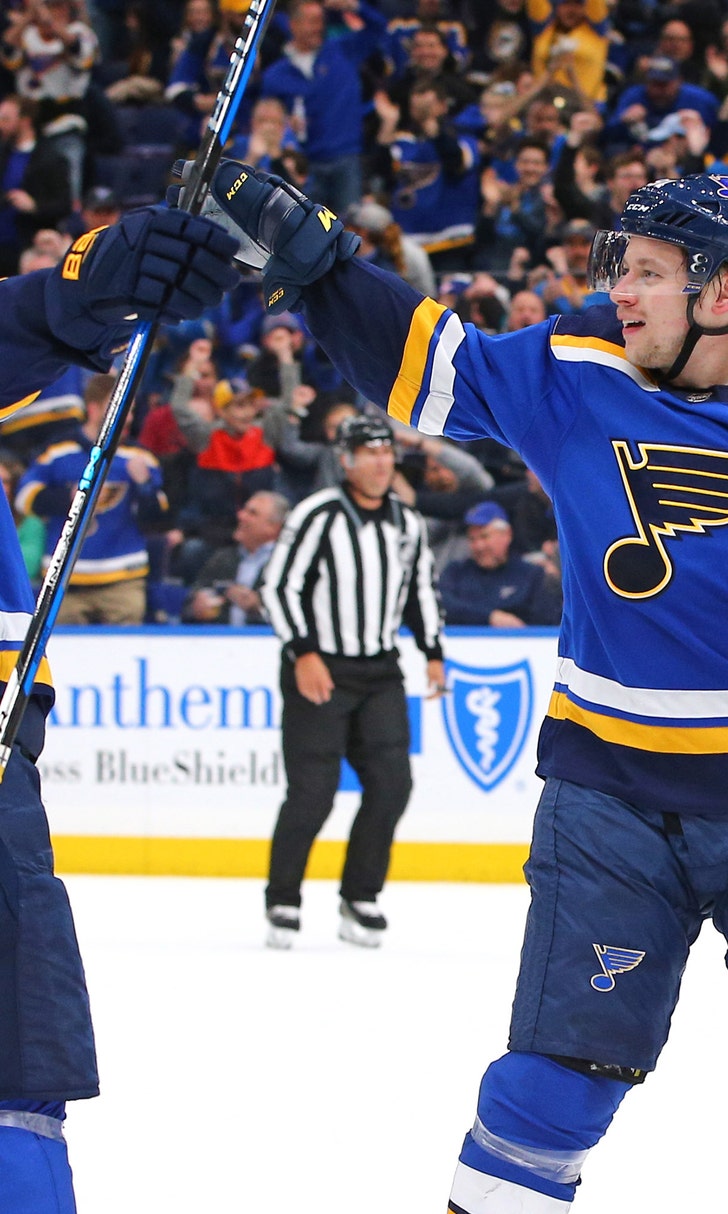 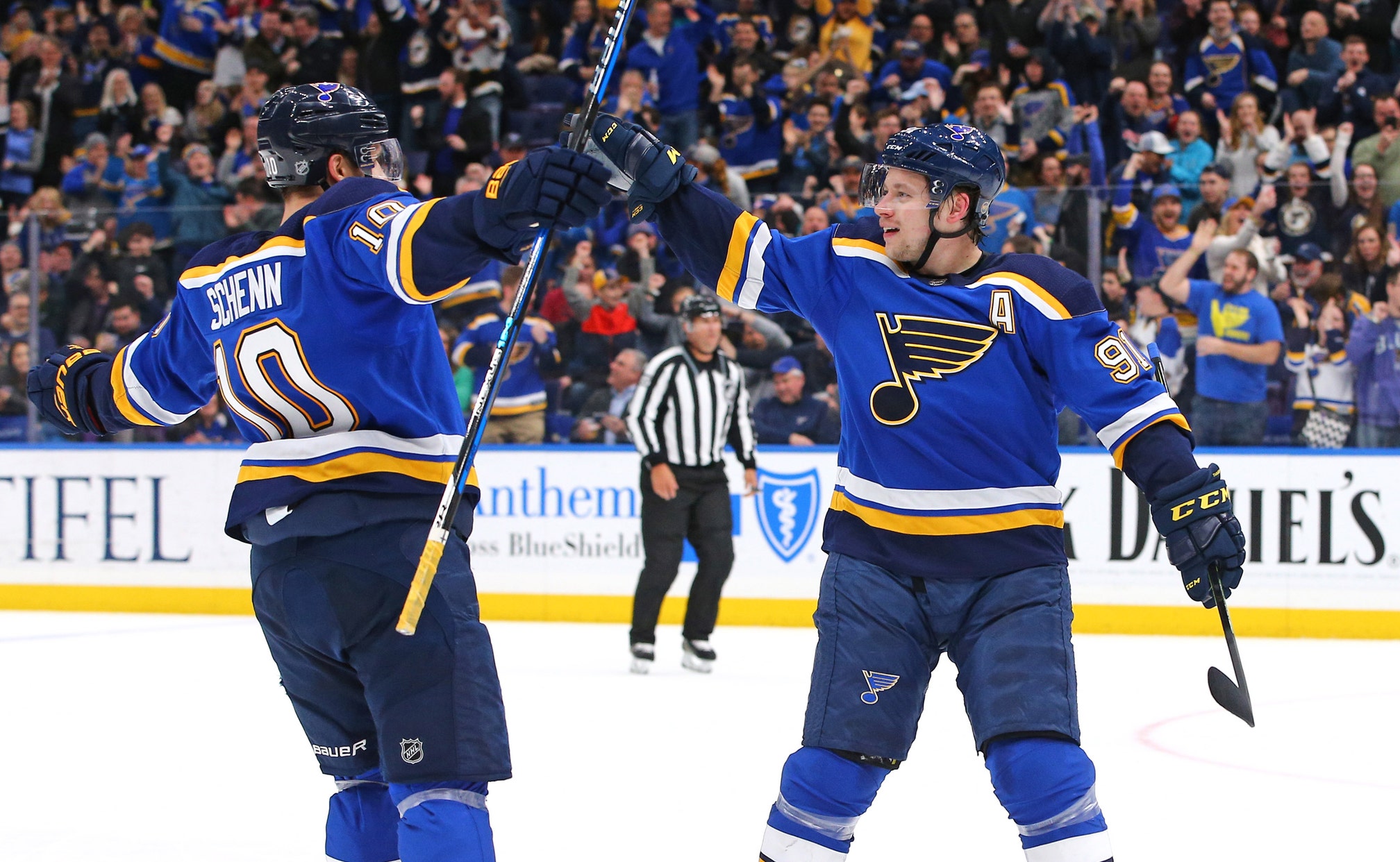 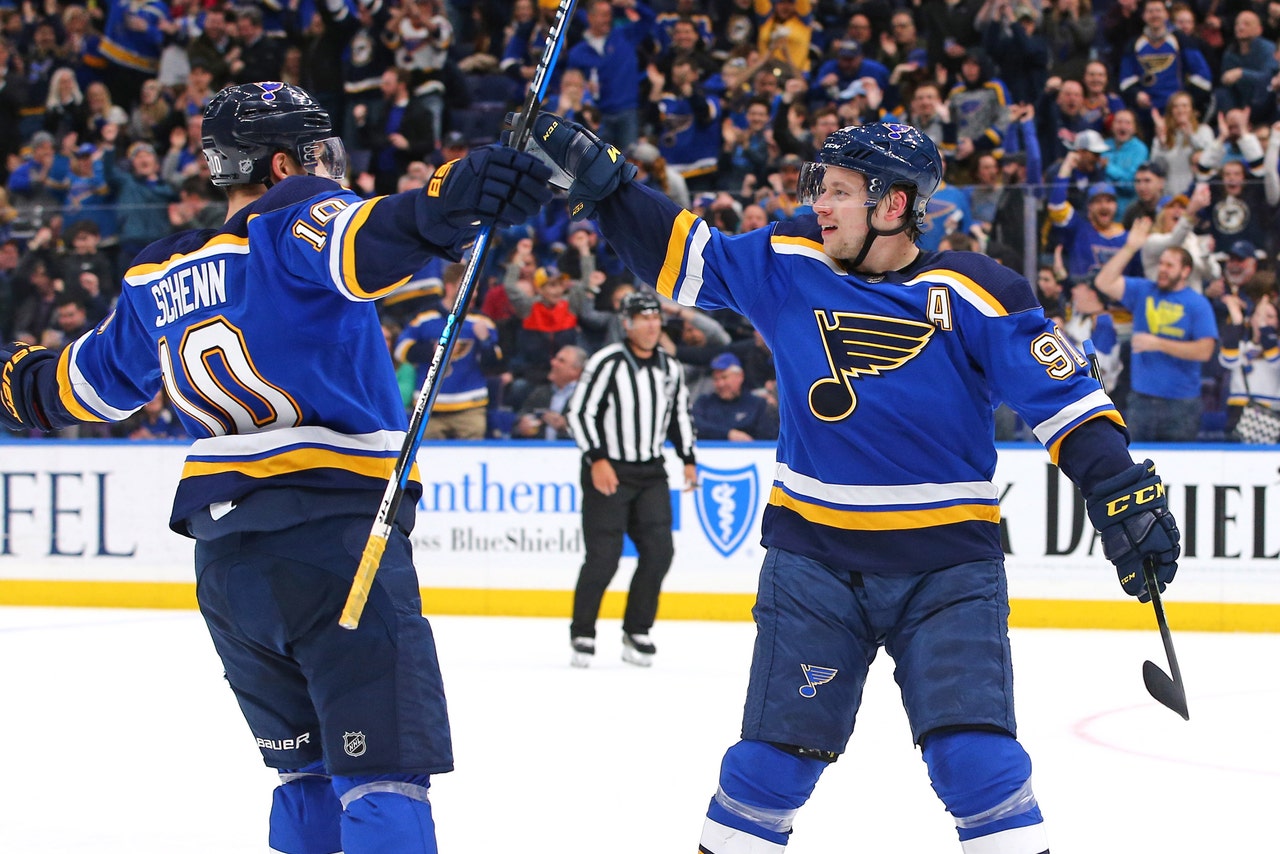 ST. LOUIS (AP) -- All Vladimir Tarasenko had to do was wait.

Tarasenko scored his second goal of the game in overtime to lift the St. Louis Blues over the San Jose Sharks 3-2 on Tuesday night.

Tarasenko got a nifty backhanded pass from Vladimir Sobotka, who fought off Mikkel Boedker behind the net for the puck. Sobotka skated in front of the net, and then passed the puck to Tarasenko, who was on the left side of the goal.

The Blues' leading goal scorer did the rest, tipping in the winner at 2:33.

It was Tarasenko's 31st goal, and he has 30 or more in four consecutive seasons. The last Blue to do that was Brett Hull, who did it for six straight seasons from 1988 to 1994.

"I knew he would make this pass," Tarasenko said. "I'm not sure he heard me or no, but he's a great player. I just expect the plays like this from him. Obviously the great play, easy tap-in goal."

"That's an unreal play," St. Louis coach Mike Yeo said. "This team works for what it gets and that play exemplified it."

Tarasenko has six goals and six assists in his last 11 games against San Jose.

"He's a good player," Dell said about Tarasenko. "I thought he was going to go short side but he went far side and just made a good shot."

Tarasenko on the pass from Sobotka to set up the game-winner in OT: "Two Vladimirs [on the ice], we'll find the chemistry together." @StLouisBlues pic.twitter.com/0ZqgMuYVWu

St. Louis has won a season-best six straight games. Four of those wins have come in overtime, all in the last 11 days.

The win moved the Blues back into a wild-card spot.

San Jose had won eight straight before the loss.

"I thought the guys dug deep and found a way to get a valuable point," San Jose coach Peter Deboer said.

Kane drew first blood for the Sharks with his 29th goal. Melker Karlsson fed Kane, who put a wrist shot off Allen's glove at 6:26. Kane has nine goals and five assists in 14 games since he was acquired in a trade with the Buffalo Sabres on Feb. 26.

Brent Burns got the second assist, giving him 50. He became the first Sharks defenseman to record 50 assists in a season.

St. Louis tied it when Sundqvist threw the puck on net and it sneaked in at 17:43. Ivan Barbashev was parked in front of the crease and helped screen Dell, who got a piece of the puck.

"That was the blueprint for the way we needed to win this hockey game," Yeo said.

It was Sundqvist's second goal in 65 career games, including 37 with the Blues. Sundqvist's only other goal came April 2, 2016, when he was with Pittsburgh.

"It's been a long time since I scored," Sundqvist said. "Actually, I didn't know what to do. It's a relief."

The teams traded power-play goals in the second period.

The Sharks took a 2-1 lead on one by Pavelski. Standing beside the net, Pavelski got a pass from Burns and tapped it in for his 20th.

Tarasenko tied for St. Louis. He got a perfect leading pass from Brayden Schenn in the left circle, then snapped a quick wrist shot to tie it.

The Blues missed a chance to take the lead about two minutes into the third period when Barbashev skated in and had Dell beat but hit the post with his shot.

NOTES: San Jose's Barclay Goodrow left in the first period and did not return. The team said he has an upper body injury. ... Blues D Alex Pietrangelo had an assist on Tarasenko's goal. That gave him 52 points for the season, a career high. ... Allen made his 10th straight start for the Blues. ... Dell got his first start in five games after San Jose played at the Chicago Blackhawks on Monday and won in a shootout. ... Blues backup goalie Carter Hutton returned after being out with a neck injury since March 8. ... The Blues are 1-2-0 against the Sharks this season.

Sharks: At Nashville on Thursday night.

Blues: At Vegas on Friday night.