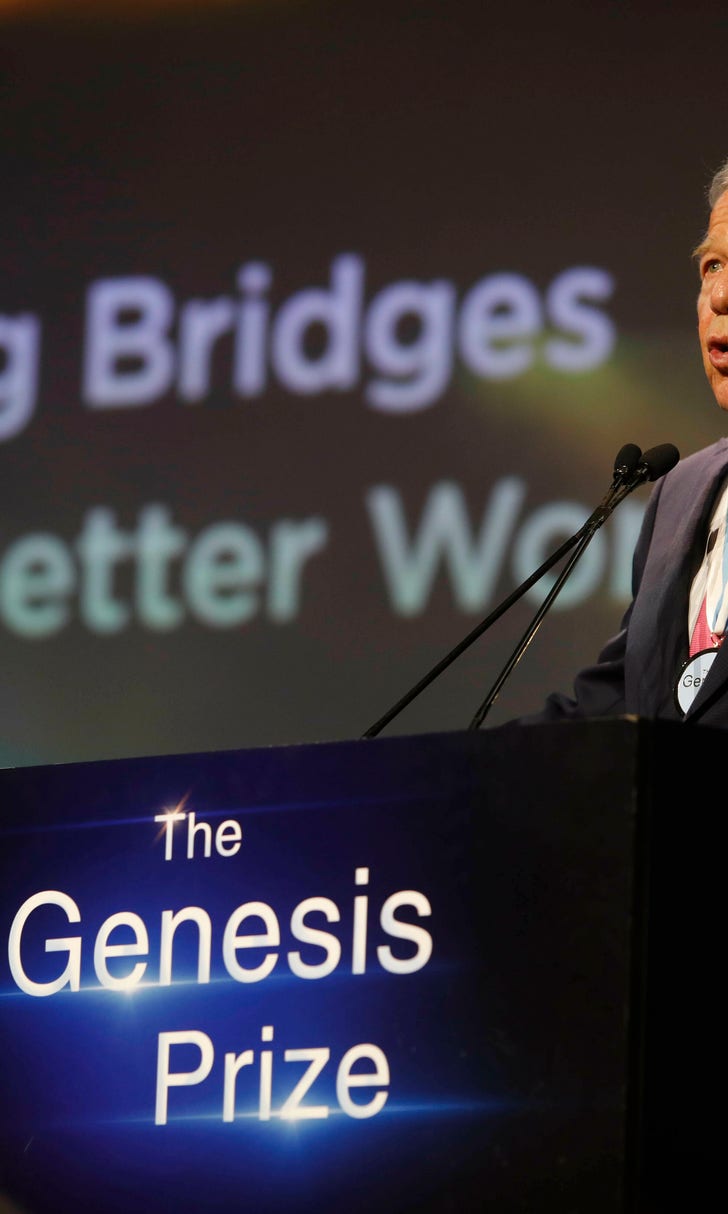 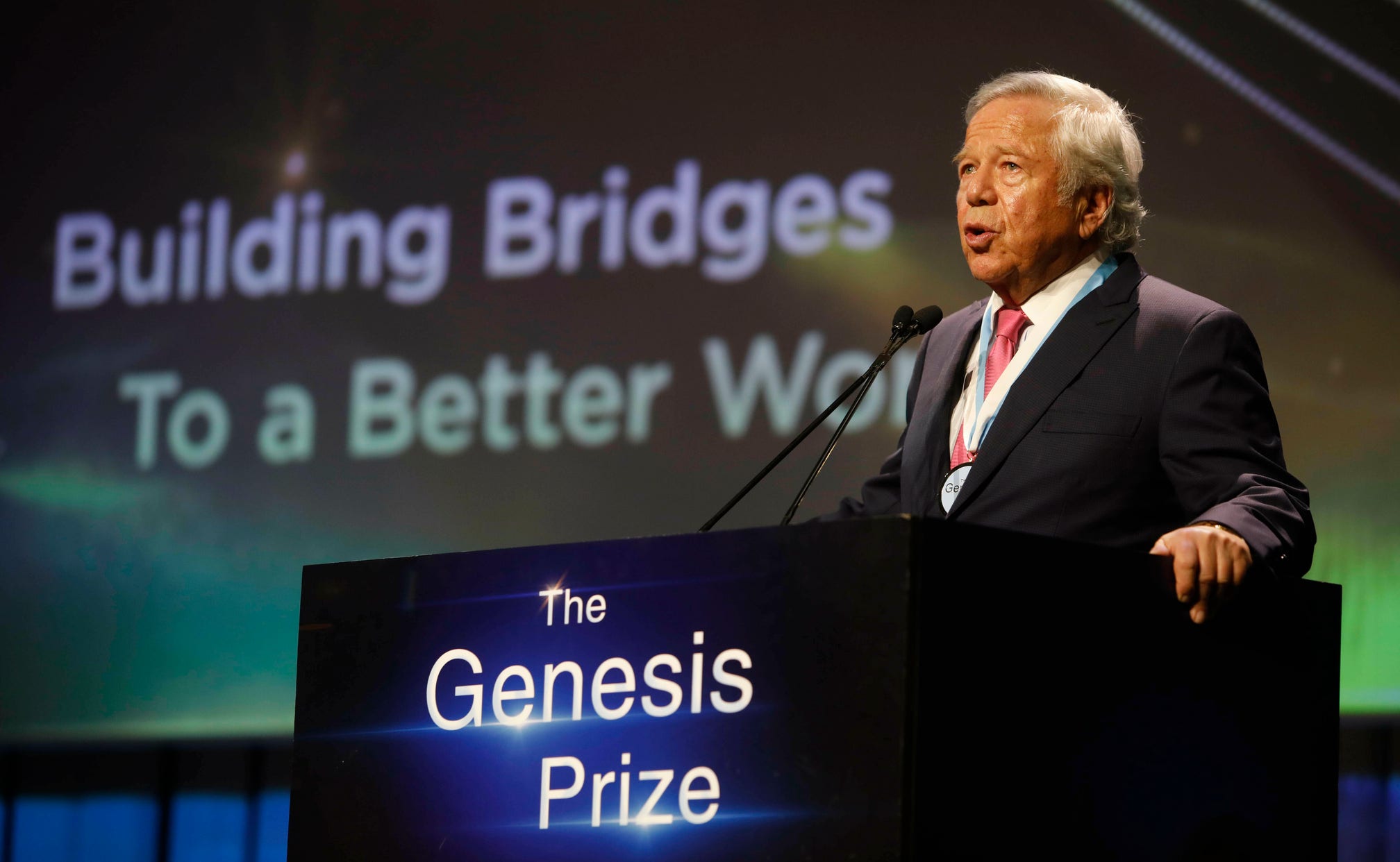 previous story
Iannetta drives in 2 in 10th, Rockies sweep D-backs
next story
Kakko ready for answer if he's No. 1 or No. 2 in NHL draft

JERUSALEM (AP) — The owner of the New England Patriots, Robert Kraft, accepted Israel's prestigious Genesis Prize at a lavish ceremony on Thursday, where he pledged $20 million to establish a foundation dedicated to combating anti-Semitism and the Palestinian-led boycott movement against Israel.

In his keynote address, Kraft told the audience of Israeli and international dignitaries that he was "humbled and blessed" to accept the award, vowing that his new foundation would seek to tackle the rising tide of anti-Semitic vitriol online.

"I believe we can use this platform of social media to make a genuine and lasting impact on the rising tide of hate," he said, "especially against our people."

The feting and ritzy ceremony in his honor in Jerusalem offered Kraft a welcome reprieve just four months after he was charged with soliciting a prostitute at a Florida massage parlor. The 78-year-old billionaire businessman has vigorously battled the charges, and the case against him appears to be crumbling. He has pleaded innocent but also issued a written apology, expressing sorrow for hurting his family, friends and fans.

Still, the embarrassing affair failed to tarnish the celebration of Kraft, a longtime supporter of Jewish and Israeli causes.

He was awarded the 2019 Genesis Prize in recognition of his philanthropy and consistent commitment to combating anti-Semitism. Organizers said his foundation would continue his efforts against anti-Semitism, as well as the Palestinian-led movement to boycott, divest from, and place sanctions on Israel, known as BDS, and "other efforts to delegitimize Israel."

The $1 million award is granted each year to a person recognized as an inspiration to the next generation of Jews through professional achievement and commitment to Jewish values.

He welcomed what he called Kraft's stand against "efforts by our enemies to undermine the State of Israel."

Leading supporters of BDS reject accusations of anti-Semitism, describing the campaign as a nonviolent protest against Israel's violations of Palestinian rights.

In his speech, Kraft stuck to safe talking points, elaborating on his love of football, strong connection to Israel and commitment to Judaism.

"These are most disconcerting times to the country I love so much," he said, lamenting that anti-Semitism appears to have gone mainstream, with a major news outlet like the New York Times recently running a bigoted cartoon and members of Congress tweeting what many have called anti-Semitic remarks. "Social media is now a platform for hateful and vile rhetoric," he said.

Kraft described his deep bond to Israel, saying that he has led 27 missions and visited the country "a hundred times" since his honeymoon with his late wife in 1962. Kraft made no mention of the scandal during the night's festivities, and the Patriots did not permit interviews with him.

Dozens of VIPs showed up to the invitation-only event, hosted by comic Martin Short, including 15 active and former Patriot players who accompanied Kraft to Israel, as well as leaders of major Jewish organizations, top business and political figures and the prime minister.

Kraft and his delegation were hosted beforehand at the prime minister's office, where they presented Netanyahu a signed Patriots helmet and posed for a joint picture along with the Vince Lombardi Trophy they won at this year's Super Bowl. Netanyahu thanked Kraft for his friendship, his longtime support and for boosting American football in Israel, where it has resonated with native-born Israelis who have taken a liking to the army-like strategy, camaraderie and collisions of the gridiron.

"Everything you need in your game, Israel needs in its game," Netanyahu told the players. "You need strategy and courage and ingenuity, we have that too."

Kraft is the sixth winner of the prestigious prize, following former New York City Mayor Michael Bloomberg, actor Michael Douglas, violinist Itzhak Perlman and sculptor Anish Kapoor. Last year's winner, Natalie Portman, snubbed the event because she did not want to appear to be endorsing Netanyahu. The saga was troubling for the foundation, which says it works hard to prevent its philanthropy from being politicized.

Kraft's selection in January seemed like a safe bet to avoid repeat awkwardness, given his years of philanthropic activity and deep ties to Israel. But the following month, Florida authorities announced the misdemeanor solicitation charges as part of a widespread crackdown on sex trafficking.

Kraft has kept a low profile since then and Patriot officials have pointedly deflected any mention of the case throughout the week-long visit to Israel.

Kraft is the founder, chairman and CEO of the Kraft Group, the holding company of a diversified portfolio of businesses, which includes one of the largest privately-owned paper and packaging conglomerates in the world. He is best known, however, as owner of the six-time Super Bowl champion Patriots, one of the most successful franchises in American sports.

Kraft, who grew up in an observant Jewish home, is a well-known philanthropist in Israel, with deep connections to politicians across the political spectrum — including to Netanyahu, whom he's known for decades. Though a Democrat, he is also friendly with President Donald Trump.

Kraft is also the driving force behind the growth of American football in Israel in recent years. He's sponsored the sport since it was launched in 1999, and there are now more than 2,000 active players on more than 80 teams playing at various levels.

In 2017, he dedicated the Kraft Sports Complex in Jerusalem, which includes Israel's first full-sized football field. At the time, he brought a group of professional football Hall of Fame players with him, including well-known stars of the game Joe Montana, Jim Brown, Roger Staubach and Mike Singletary.

The Genesis Prize was inaugurated in 2014 and is run in partnership between the Israeli prime minister's office, the private Genesis Prize Foundation and the chairman's office of the Jewish Agency, a nonprofit group with close ties to the Israeli government. It is funded by a $100 million endowment established by the foundation.