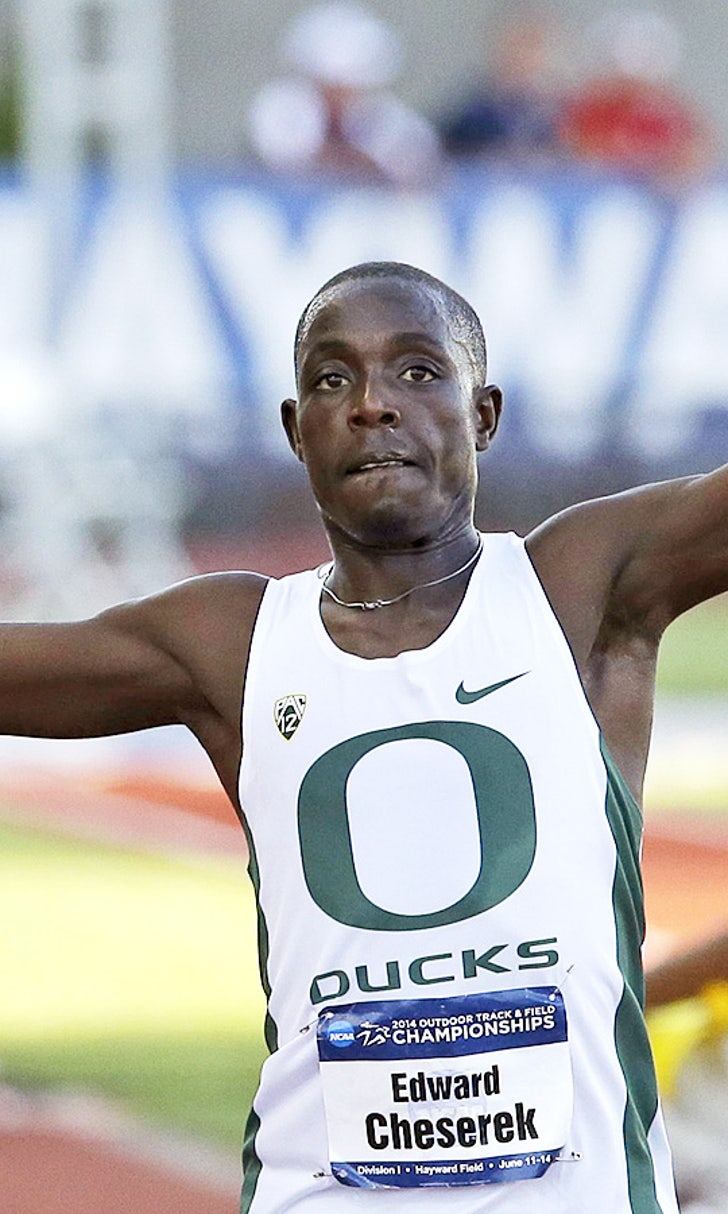 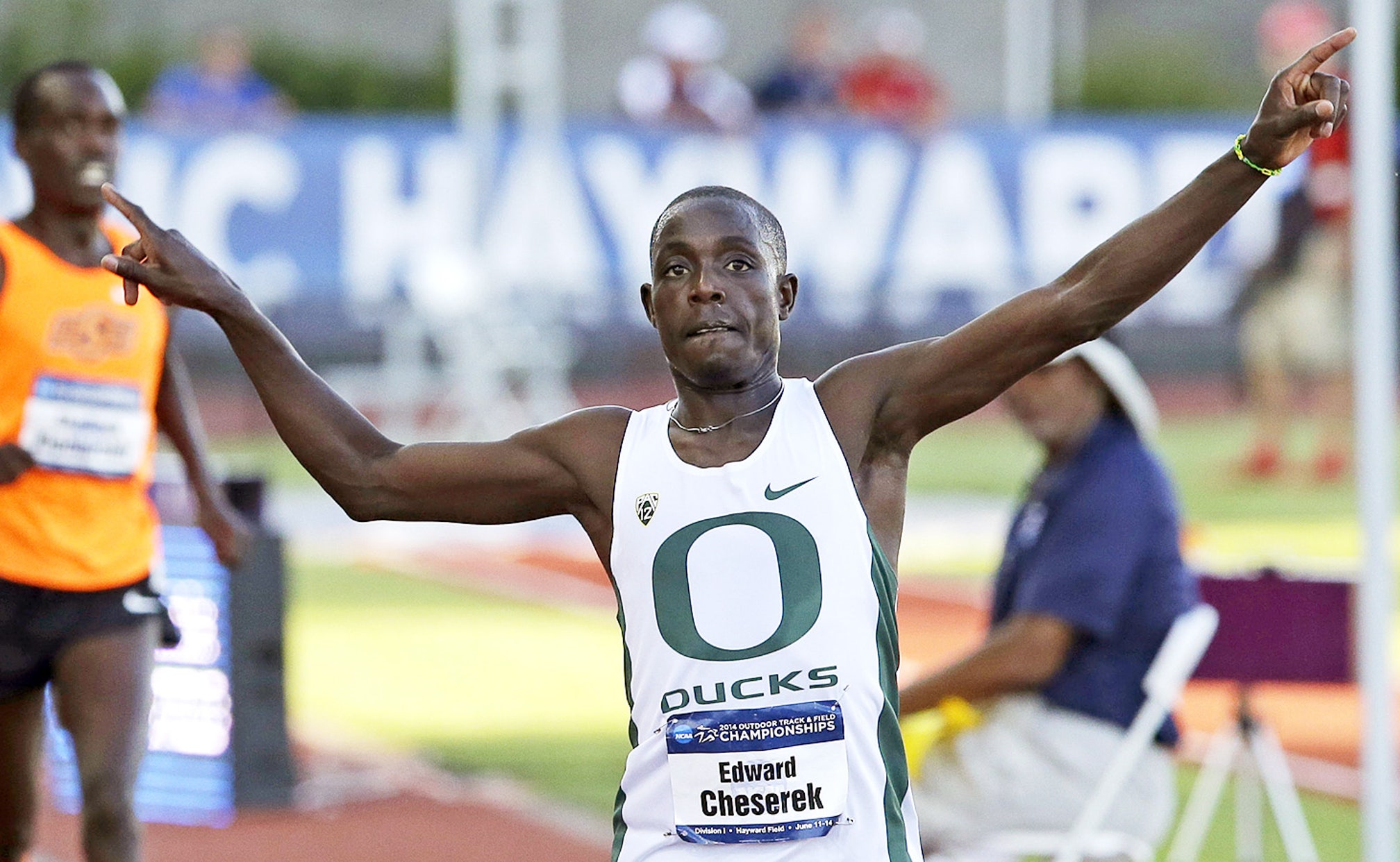 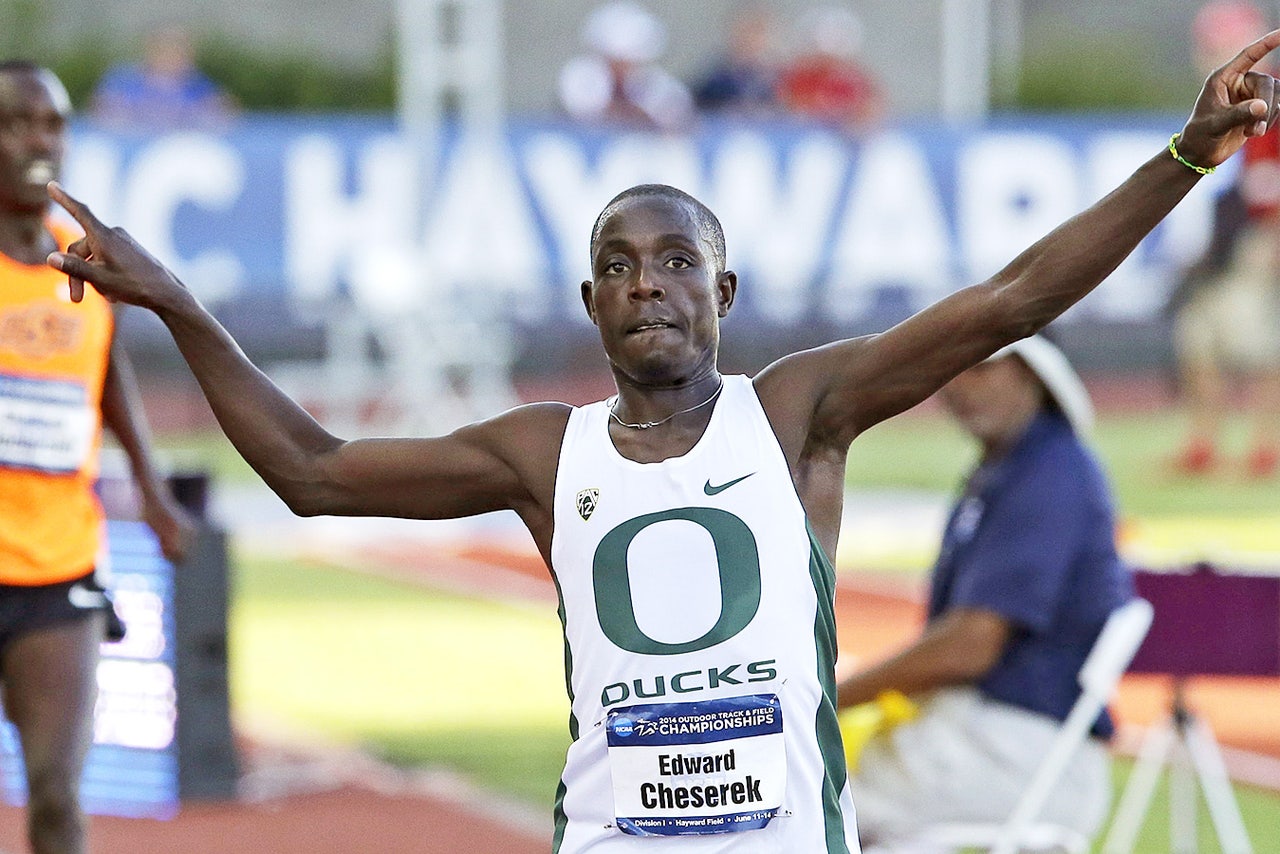 Oregon freshman Edward Cheserek surged on the final lap to win the 10,000 meters at the NCAA track and field championships Wednesday night.

Cheserek won in a personal-best 28 minutes, 30.18 seconds, smoking the field with a 53.31-second final lap. He is the first freshman to win the event since UTEP's Suleiman Nyambui in 1979.

Cheserek has not lost an NCAA title race, winning the cross country title in November and the 3,000 and 5,000 at the indoor championships.

Oklahoma State senior Shadrack Kipchirchir was second and Wisconsin senior Mohammed Ahmed finished third in the event, the highlight of the opening day of the championships at Oregon's Hayward Field.

Cheserek also will run the 5,000 on Friday night. He will face Arizona senior Lawi Lalang, who was the defending champion in the 10K but is running the 1,500 and 5,000 this year. Lalang has eight NCAA titles.

The Ducks entered the meet ranked No. 1 in the nation by the U.S. Track & Field and Cross Country Coaches Association. Oregon has won eight straight Pac-12 titles and claimed the NCAA indoor title, but the team hasn't won an outdoor championship since 1984.

Second-ranked Florida and third-ranked Texas A&M were the co-champions last year, when the outdoor championships also were held at Hayward Field.

On the women's side, Texas is ranked No. 1 by the USTFCCCA, followed by Texas A&M. The third-ranked Ducks, coming off their sixth straight Pac-12 title, have not won an outdoor team title since 1985. Kansas is the defending women's champion.

Most of the events Wednesday were semifinals. Oregon's women failed to advance in the 400 relay because of a dropped baton, which could hurt the Ducks' chances for a team title.

Princeton sophomore Julia Ratcliffe won the hammer with a throw of 219 feet, 5 inches, becoming the school's first woman to win an NCAA title.

Oregon's Jenna Prandini won the long jump with a leap of 21-6, becoming the first Duck to win a title in the event.

Texas junior Ryan Crouser won the shot put at 69-3 1/2 for his third straight title in the event, Florida junior Fawn Miller took the javelin at 190-8, and Mississippi junior Sam Kendricks won the pole vault at 18-8 1/4.

Crouser, who is an Oregon native, hurt his left foot on his final throw and was going for X-rays following his victory.

"I always make it a goal of mine to end on my best throw, and I've done it every meet but one this season," he said. "I did it again but it kind of cost me a little bit."

After five events in the decathlon, Texas sophomore Johannes Hock was leading with 4,243 points, followed by Wisconsin junior Zach Ziemek with 4,223. The event concludes on Thursday.