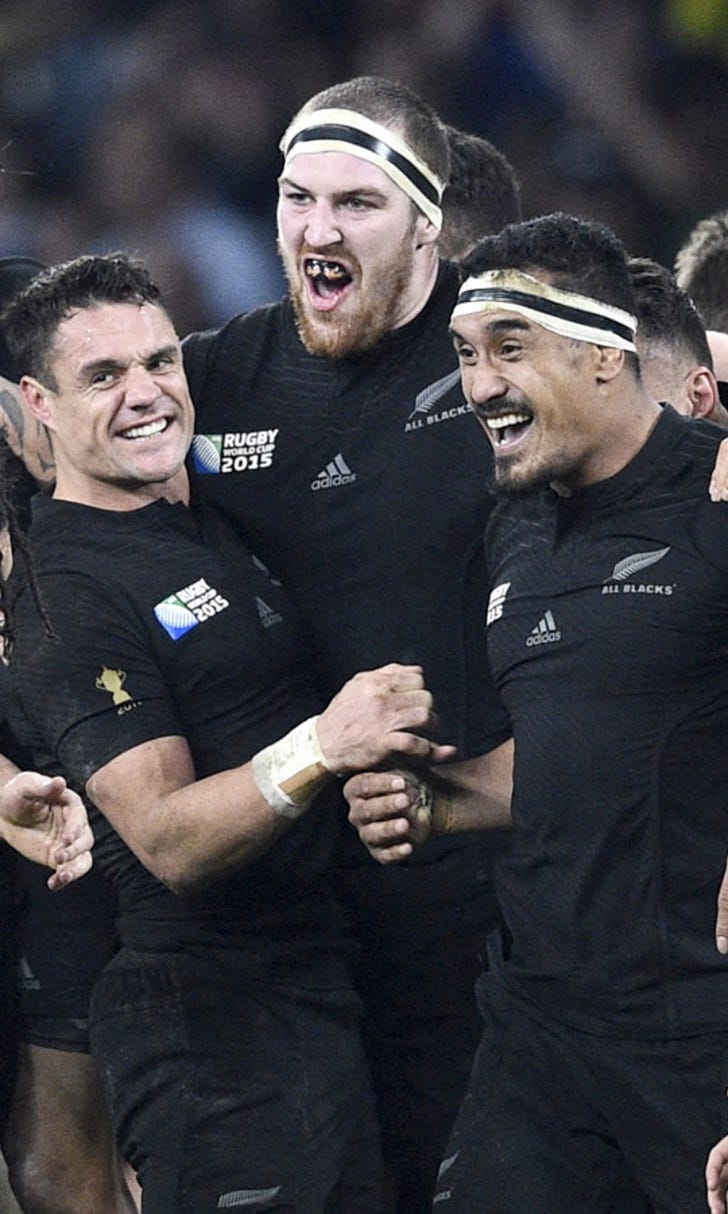 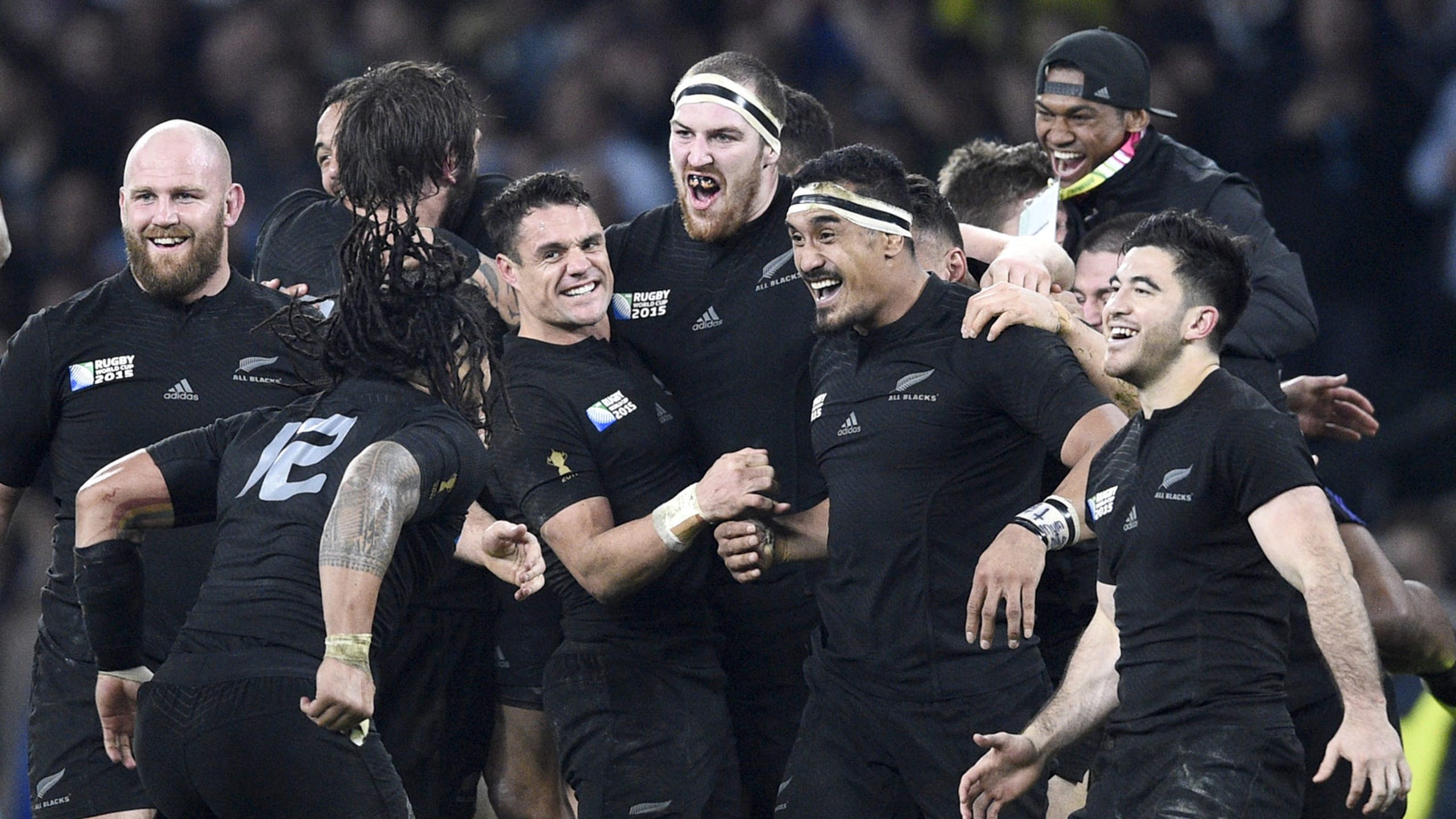 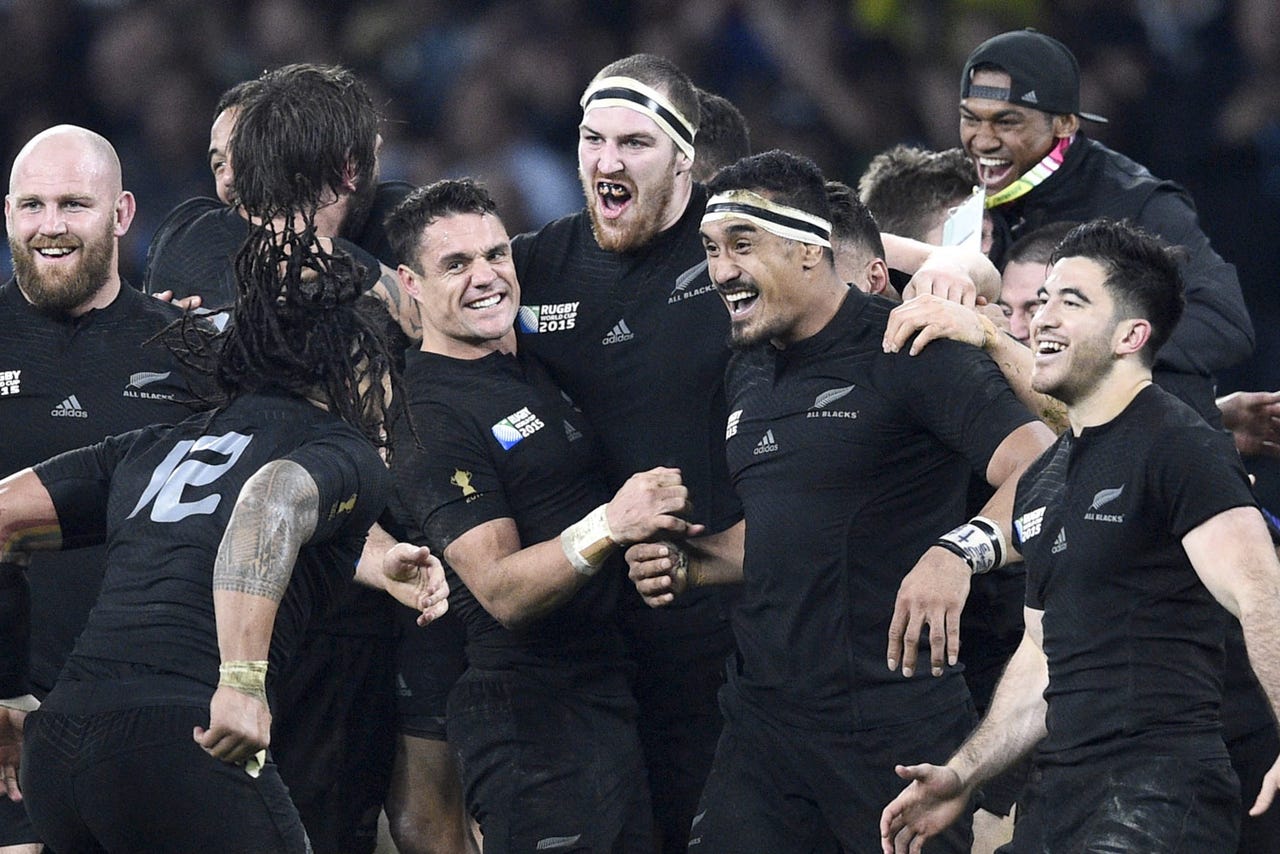 New Zealand capped one of the most dominant eras in rugby history by becoming the first team to retain the World Cup, repelling Australia's second-half resurgence in a 34-17 win sealed by the boot of unflappable Dan Carter on Saturday.

In the 112th and likely last test of his record-breaking career, Carter steered the All Blacks to an unprecedented third global title -- and first outside New Zealand -- with a dropped goal, a penalty from halfway, and a right-footed conversion of Beauden Barrett's breakaway try in the final 10 minutes at Twickenham.

Carter finished the highest-scoring World Cup final with 19 points, and finally played a full part in an All Blacks' World Cup win after getting injured during the team's 2011 title campaign.

"It is the ultimate achievement," said Carter, who -- if this really is his final act as an All Black -- concludes his test career with 1,598 points, over 300 more than the next best.

Since winning the 2011 final, New Zealand has won 49 of 54 games under coach Steve Hansen -- losing only three of them -- to enhance the legacy of one of the greatest teams in sports.

"The relentless desire to be better, keep improving and add to the legacy of the All Blacks came from Steve and the management," said New Zealand captain Richie McCaw, one of five test centurions -- with Carter, Ma'a Nonu, replacement Keven Mealamu and now-retired Tony Woodcock -- who will likely bow out after this tournament.

Nonu also had a fitting farewell in front of 80,125 spectators. The powerful center scored the best of a final-record five tries, sprinting through the Australia defense from 40 meters out to help the All Blacks into a 21-3 lead by the 42nd minute.

By then, it appeared that a grueling World Cup campaign had taken its toll on the Wallabies, who produced twice as many tackles as New Zealand in the first half and barely got out of their half.

Yet, Australia capitalized on the 52nd-minute sin-binning of New Zealand fullback Ben Smith, for a tip tackle, to score tries through David Pocock and Tevita Kuridrani while having a man extra. The Australians moved within four points of their neighbors and were threatening to pull off the greatest-ever World Cup comeback.

"We came pretty close to swinging the momentum today," Australia coach Michael Cheika said. "A bounce of the ball here and there ..."

Wearing a brace on his right knee, Carter had been given some rough treatment by the Wallabies -- prop Sekope Kepu downed the great flyhalf twice in the first half with a late hit and a high tackle -- but he was there at the end to see New Zealand home.

Like in the semifinal win over South Africa, Carter landed a dropped goal from 42 meters, halting Australia's momentum and pushing the All Blacks seven points clear. New Zealand won a penalty at the scrum and Carter kicked it from just inside his limit to make it 27-17. The celebrations really started among Kiwi fans when Barrett raced onto a kick through, hacked the ball on, and grounded next to the posts.

The left-footed Carter, with his final touch, took the conversion with his right foot and there were to be none of the last-minute nerves that marked the 2011 final triumph at Eden Park.

"It was a massive relief four years ago," McCaw said. "At the end here, rather than a huge sense of relief, it was satisfaction."

Fireworks exploded, tickertape flew, and Will Smith's "Men in Black" rang out as McCaw lifted the Webb Ellis Cup toward the dark Twickenham sky in front of jubilant teammates on a stage on halfway. Seconds later, champagne corks were flying and then the All Blacks performed one last haka.

As cameras clicked all around, a keeper will be the sight of McCaw and Carter holding the cup aloft, one handle each.

"I think he (McCaw) is the greatest All Black we've ever had, and Dan is a close second," Hansen said. "One is a flanker and shouldn't play 148 test matches as a flanker. It's unheard of."

The Wallabies had a tough path to the final -- they've virtually been playing knockout rugby since midway through the pool stage -- and the final was a game too far. Game-ending injuries to inside center Matt Giteau and lock Kane Douglas in the first half didn't help.

Nehe Milner-Skudder's try just before halftime was crucial, opening up a 16-3 lead at halftime for an All Blacks machine that was constantly getting over the gainline. Nonu did just that two minutes after the break with one of the great tries in a final, collecting Sonny Bill Williams' offload, bursting through two defenders and sidestepping another before holding off Drew Mitchell in a stretch for the line.

Australia took its first step in its comeback when Pocock grounded at the back of an eight-man rolling maul, after a lineout earned when Smith was sin-binned for a dangerous tackle on Mitchell. Then Kuridrani ran onto Bernard Foley's pass to run to the line from 20 meters.

Smith returned to the field, Carter stepped up, and the All Blacks made more history.