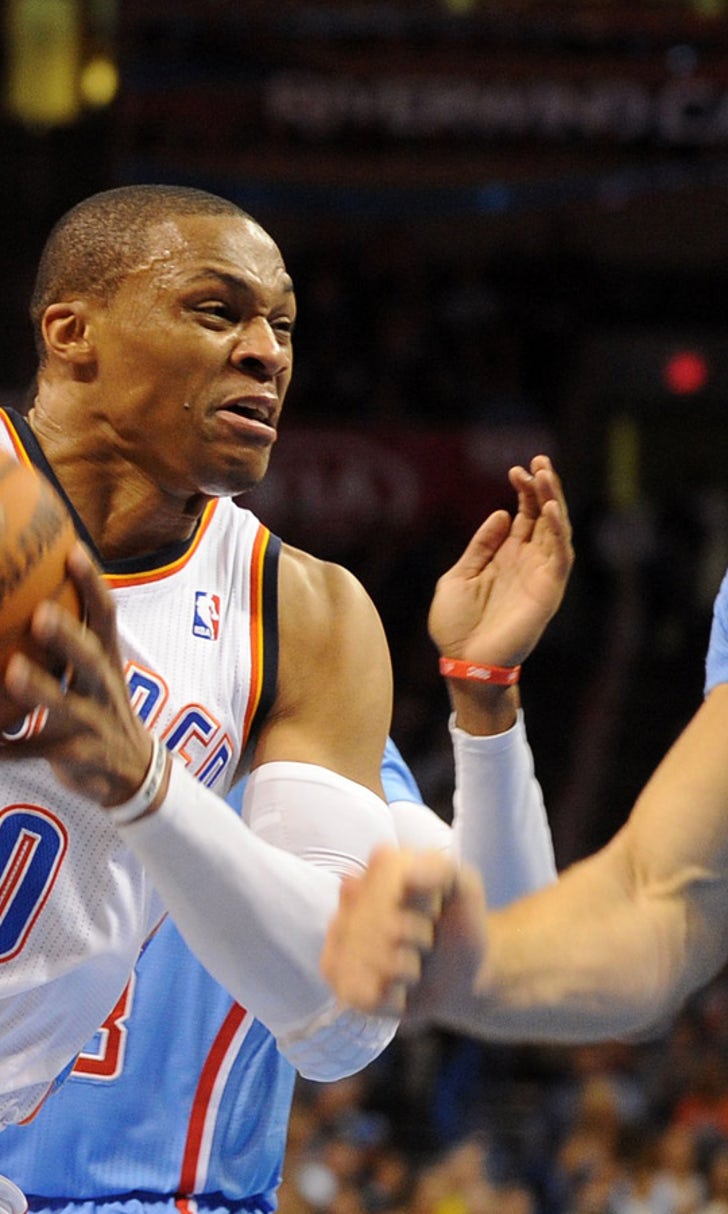 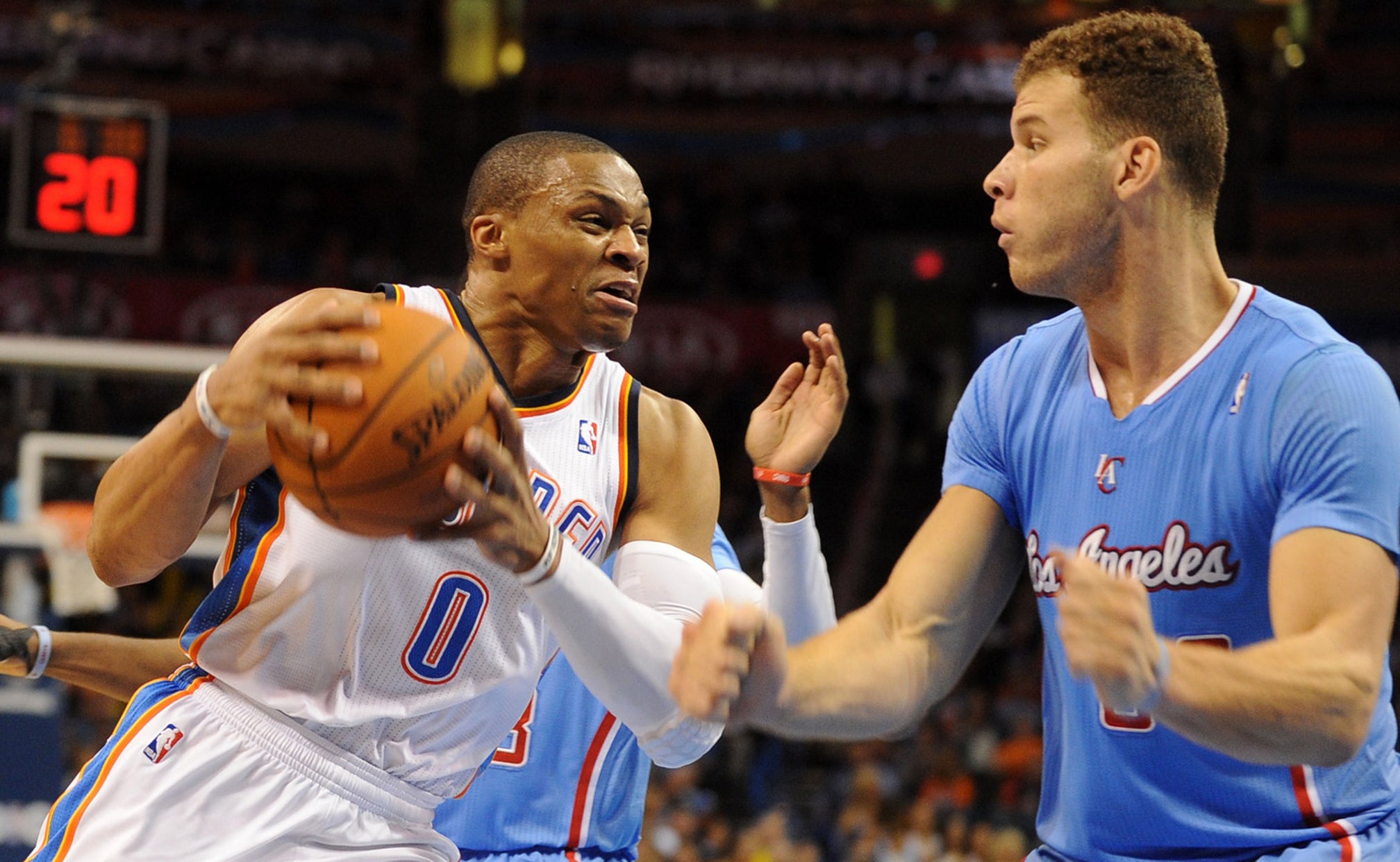 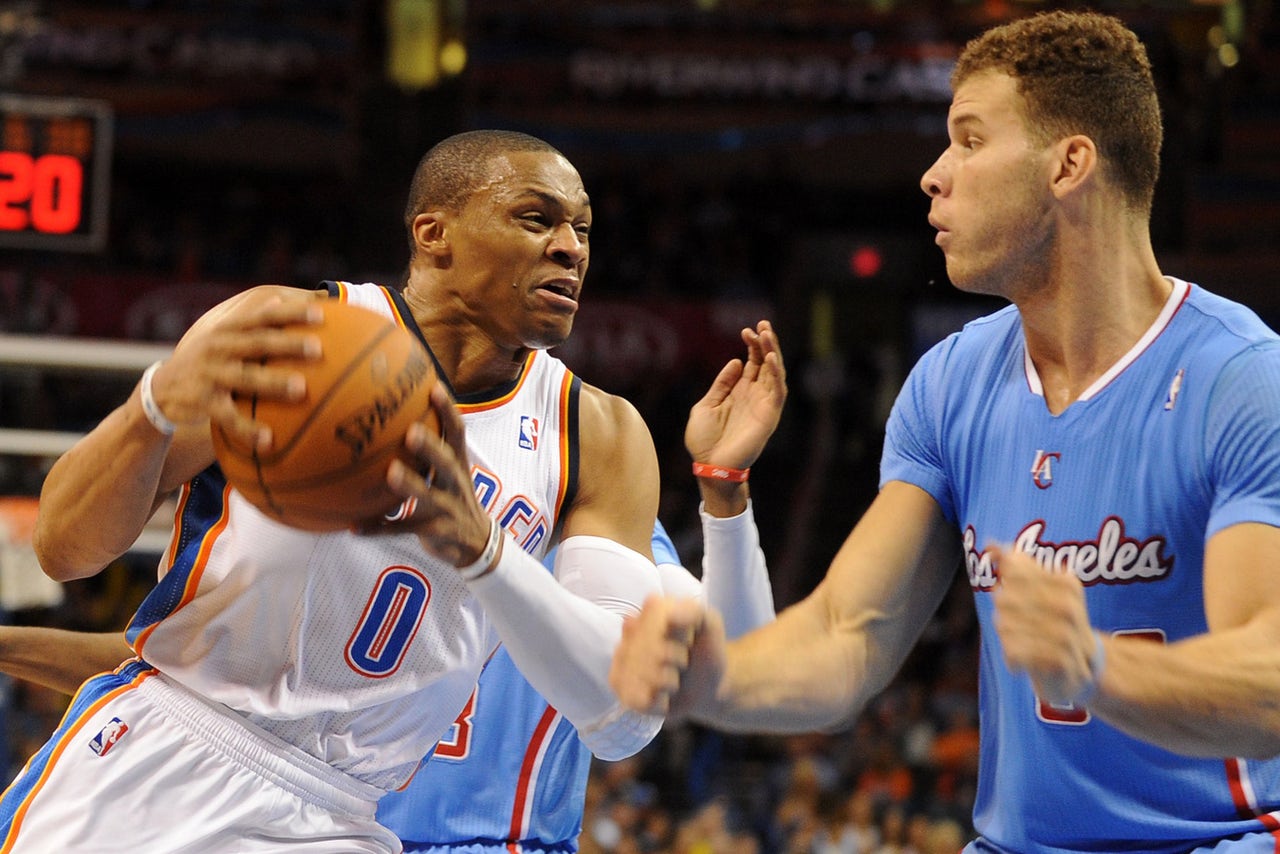 This is why NBA brackets aren't as fun: If you were asked to predict back in October the top four playoff teams in each conference, you'd probably have nailed seven of eight. In the West you have the Spurs, Thunder, Clippers and Rockets. In the East, it's the Heat, Pacers, Raptors and Nets (the Raptors playing the lone Cinderella).

The playoff seedings of the top teams weren't hard to pick. But as we near the playoffs, it's still valuable to know which teams are streaking the hottest. That's what these rankings reveal.

Note: NBA rankings are updated each week before Wednesday's games.

The Spurs snag homecourt advantage throughout the entire playoffs with two wins in these final four games. The Spurs have enough of a pad to let guys rest (or to get a guy like Tony Parker his rhythm back) before making a run at the Finals.

It's strange to think the postseason could hinge on this Clippers home game against the Thunder, but there's actually tons at stake. The Clips are just 1.5 games behind the Thunder, and a home win means closing in on potential homecourt in a second-round matchup with OKC.

The Rockets are positioned quite securely in that No. 4 spot, which is allowing plenty of rest for Dwight Howard and Patrick Beverley before the playoffs. Rest is fine, of course, but there should be some worry how much rust will need to be shaken in Houston's likely matchup against Portland.

Oklahoma City can't start messing around now and give away homecourt in that potential second-round meeting with the Clippers. This current road trip began with back-to-back losses to the Rockets and Suns before winning in Sacramento. But with their lead shrunk to just 1.5 games, the Thunder can't afford to lose the trip's finale against the Clippers.

The path to the Eastern Conference Finals isn't all that treacherous. In fact, it could end up looking more like a stroll. Not to overlook the Wizards, but if Chicago were to take the three seed, all it could take is series victories against Washington and faded Indiana to reach the ECFs against Miami. It actually seems like the likely scenario at this point.

Say what you will about these seemingly "room-temperature" Heat, but Erik Spoelstra has proven he knows when to switch gears into championship drive. Perhaps it couldn't have worked out any better: Miami will probably take the No. 1 seed in a soft East. And just ask Vegas, that makes the Heat still heavy favorites to win the title.

The Nets went 4-0 against the Heat this season. When Kevin Garnett and Paul Pierce joined Brooklyn, the clear goal was to break up the South Beach dynasty. If nothing changes, the Nets would be scheduled to play the Heat in the second round. It'd certainly be interesting.

There's no longer a fear of jinxing it. You can say playoffs in Portland. The collective exhale of relief after the Trail Blazers' recent stumble may provide a gust of momentum into the postseason. Winning 50 games, already 17 games better than last season, is still only worth opening in Houston, but it's a huge step and a winnable series.

David Lee's hamstring strain has kept him sidelined for weeks, and now Mark Jackson has said the nerve inflammation may keep Lee out even into the playoffs. That's bad news for the Warriors, as Lee averages 18.5 points and 9.4 rebounds, and the Warriors aren't exactly deep in bigs. They did go small last postseason, though, and relied heavily on standout play by Harrison Barnes and Draymond Green.

Dallas has a two-game lead with just three to go, but this is no easy trio: home vs. the Spurs and Suns before the season finale in Memphis. Luckily for the Mavs, they hold the tiebreaker against Memphis and sit in the driver's seat.

There's nothing scarier than a charging Bull in your peripherals, but at least the Raptors, as a division leader, hold the tiebreaker for the No. 3 spot and keep winning themselves. If the Raptors keep playing like this, it won't be too long until Drake shows up in their clubhouse. Oh, he already has a locker? Never mind.

Ths Suns have a difficult road to the postseason, but at least they determine their fate. Gripping the 8th spot by a single game, the Suns have five games left: at New Orleans, at San Antonio, at Dallas, vs. Memphis and at Sacramento. The road games are an obstacle, and Phoenix also loses a tiebreaker to the Grizzlies.

Grizzlies beat writer Ronald Tillery of the Commercial-Appeal recently tweeted that Dave Joerger, when asked if he could explain why the defense hasn't been as sharp lately, responded: "We've been playing good offensive teams." Only thing here, coach: The West's one through eight playoff teams are stacked offensively. This may be a poor excuse.

Funny how quickly a guy falls from a Coach of the Year favorite to the hot seat. Of course, it's natural to seek a primary scapegoat even when there are multiple. Maybe the 7-foot-2 Roy Hibbert should stand out in the mob, though. He's struggling and pouting through the disaster.

Who had the Bobcats in their Sweet 16? Liars. Charlotte is never expected to make the postseason, yet Jordan's team is in for just the second time in franchise history. Unlike that 2009-10 playoff team though, these Bobcats actually have a bright future. They could even win the franchise's first playoff game.

The Wizards are in a strange situation. They currently hold the No. 6 spot in the East, which probably means a matchup against the Bulls or Raptors. But if they fall to the No. 7 spot, it could mean a first round against the struggling Pacers. Tanking into the playoffs could actually make sense.

It's never a good year when you're so shorthanded that you need a player to post bail for an arrest on possible terrorist threats -- just so you can play the Magic.

Don't feel bad for Mike Woodson, even if Larry Brown does. He hasn't been treated perfectly in New York -- a lame duck bobbing through the waves of the Phil Jackson hire -- but when you coach in the biggest market and you have big names, you better make the playoffs.

The Hawks are doing everything they can to give this thing away, but as has been the case all season, no one else in the East apparently is interested in the playoffs either. For now, the Hawks barely cling to the eighth spot by 1.5 games ahead of New York.

It's been an awful year for the Nuggets: Injuries, massive losing streaks and ending a run of 10 consecutive postseasons. The late-season bright spot has been Kenneth Faried, which could either be reason to extend him or trade him for high value.

The Pelicans may go without superstar Anthony Davis over the last five games, as the young big man deals with back spasms and a soft tissue injury to his left foot. The franchise has no reason to win and therefore no reason to risk their golden piece. Don't be surprised if they shut Davis down.

Kyrie Irving is the best player on the Cavs, and he's a top 25 talent in the league. But don't make excuses for his bad luck in Cleveland. True stars find ways to win and lead, and he just hasn't done either, poor circumstances or not.

If the Kings are a young team that's growing, well consider this puberty. Yes, Sacramento is hitting their growth spurt and putting hair on its chest, but that doesn't necessarily mean they look good or are ready to play with the big boys.

Kent Bazemore will sit the remainder of the season due to a torn tendon in his foot. In other words, he's now officially a member of the 2013-14 Lakers. Injuries sum up the season. It isn't Mike D'Antoni's fault, but it will likely cost him his job anyway.

Joe Dumars' reported resignation is the tail of a faded era of Pistons success. He butchered this past offseason and it cost him the job he's held since 2000, but drafting Andre Drummond might make up for Darko Milicic.

Despite Arron Afflalo's nasty little slump (five games of 33 FG percent or less), it's clear the Magic's leading scorer is one of the league's most improved players. He's been one of the few bright spots in Orlando, averaging 45.6 percent shooting for 18.5 points per game.

The only thing the Jazz are playing for at this point is the worst record in the West. Of course, that's pretty much been the case since November.

You could almost sense Danny Ainge, eyebrows raised, watching what the 76ers were pulling off with their 26-game losing streak. While the Celtics won't have enough time to collapse that drastically, their current eight-game losing streak is helping their lottery odds.

The tanking trophy has already been locked up by Milwaukee, so now the 76ers finally have nothing (for real this time) to play for. That's kind of depressing.

Larry Sanders seemed to be a sure-fire success for the Bucks. He's a multi-tool post player with a certain likeable star quality. But his recent six-game suspension for violating the league's anti-drug policy is just the latest update in a career that's sinking into more trouble than worth. In other news, the Bucks clinched the lottery trophy.